Press X to dance. It’s not the first demonstration of demonic prowess I expected to see during my brief hands-off playthrough of Vampire The Masquerade: Bloodlines 2. But it is one of the very first things developers Hardsuit Labs show off. Our character has just been sauntering through the streets of Seattle. Sewer grates pump steam into the air, the lights of the city glare on the wet roads. The womp-womp of a nearby nightclub lures our boy in, and he proceeds to the dance floor, where a crimson prompt appears on-screen. This is it, he must be thinking. I am an avatar of darkness, I am a child of the night, the elegance of blood magic flows through me. Press X to dance.

The vampire starts dancing, and he is bad.

It’s like your mate Chad at the techno night. But that’s probably okay. In this world (of darkness) the vital rule of vampire society is not to let humanity know you exist. So our protagonist is doing a good job. Nobody who dances this goofily could possibly be a demon of the night. But later, I'll see a more violent side to him. As the demo goes on I’ll see bashed heads, flippy kicks, baseball battery and the gory ensplattening of an entire human body.

It’s basically a 20-minute playthrough of the short gameplay trailer you might have seen this week. I’m getting to see the in-betweeny bits, but I’m still not actually allowed to play myself. Nikhat Ali, a producer at Paradox is playing on my behalf, while Rachel Leiker, head UI wrangler, explains things as we go along. Cara Ellison, writer (and one-time journaliser for RPS) is also in the room, chipping in with vampy factoids. I’m basically only allowed to watch, and shout out suggestions during critical moments of choice, like a terrible backseat bloodsucker. 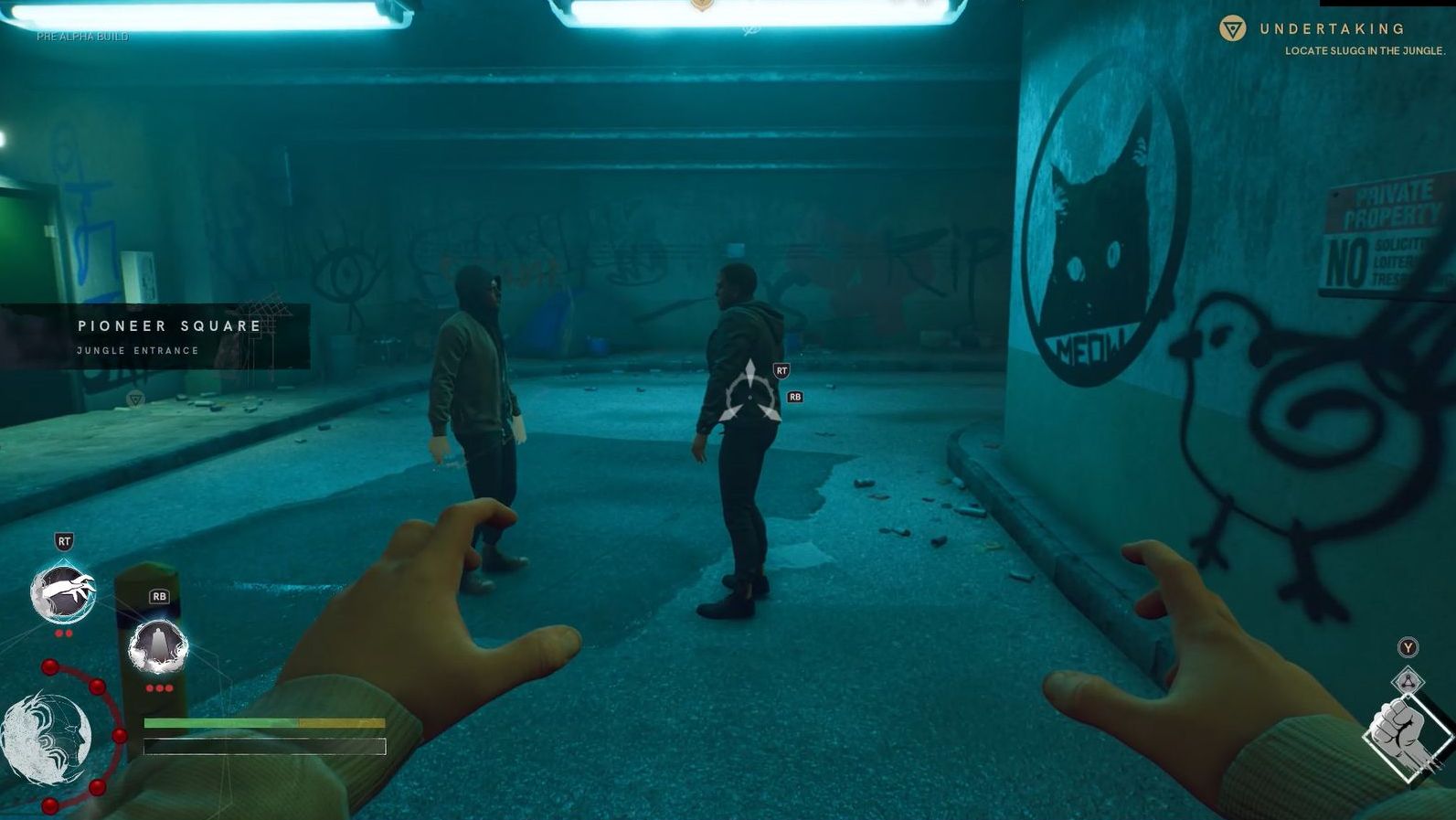 I was allowed to choose between three “Thinblood disciplines” though (basically beginner superpowers). The choices were: bats, telekinesis, or, um, “mist”. Yes, we were offered the power of furry bloodsucking rats, powerful psychic box-flinging, or the ability to harness a form of mildly inconvenient weather. Obviously, I chose the mist. Later, I would see how this was useful. It lets the character turn into a cloud of grey vapour and get into buildings by floating through vents or air conditioning units. But it also seemed to give him the power to choke enemies from a distance with a forceful puff of smog.

I won’t go through the whole demo but basically the mission for our dance-happy vamptagonist was to find a fellow bloodlover called Slugg, who is almost certainly a scumbag with a name like that. He has some information we need on a data drive of some sort. But to find him we’ve got to go see a Nosferatu vampire. A sewer-dwelling information broker.

When you create your character, we’re told, there are a bunch of vampire types you can choose from. Paradox have been drip-feeding how each of these monsterpeeps works over the past few weeks. Their special powers, their whole schtick. For example, there are the scheming, politically minded aristocrat dirtbags called the Ventrue, who can hypnotise and command others to do their will. Then there are the Brujah, who are lumbering strongvamps that hang out at a kind of Fight Club for people with pointy teeth, and whose combat skills include smashing the ground to cause a shockwave. 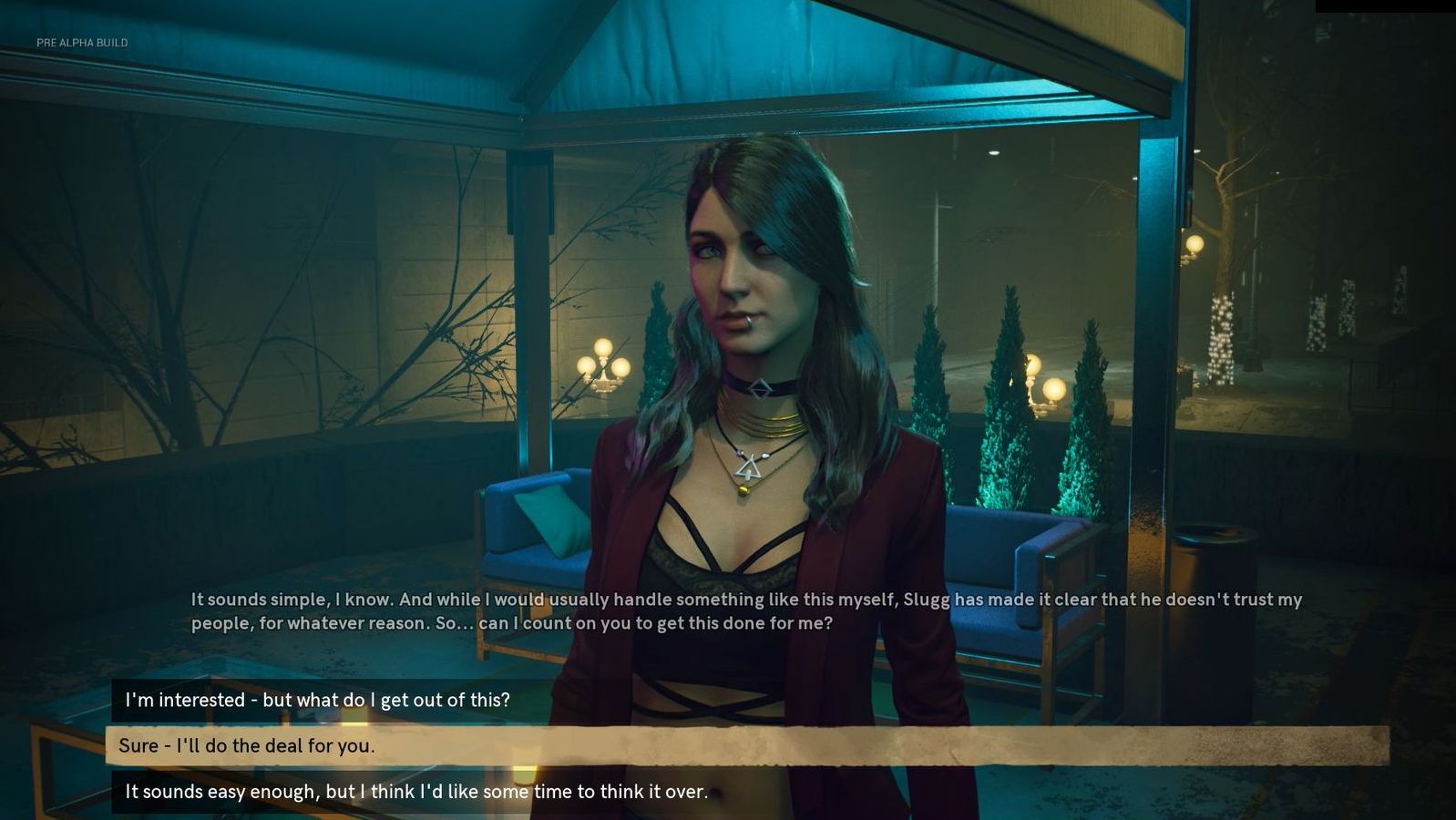 The Nosferatu (who have not been announced as a vamp-type you can choose to play as), on the other hand, are the unlucky vampires whose faces become disfigured in the process of vampification. They are, says Leiker, a “walking Masquerade violation”. So they have to lurk in sewers and dark places, but somehow still manage to get dirt on everyone, becoming the literal underground informants of Seattle.

“You’ll be interested to know there are a lot of academics and journalists in the Nosferatu,” says Ellison, her voice hanging on the word “journalists” pointedly. “Just so you know.”

But the Nosferatu we meet seems friendly enough. He’s a smiling geezer called Samuel who wears a suit jacket over a t-shirt, casually dressed for life in the grime of the undercity. But also because it was the 1980s when he was “embraced” (vamplingo for “turned into a vampire”), and his fashion sense got stuck at that exact decade, says Ellison. Never mind, he tells us where to find Slugg and off we go on a hunt that sees us using vampire vision and eventually getting into a few fights.

The big brawl of the demo saw our toothy hero punching thugs in the head, picking up a baseball bat and swinging wildly. He also nabbed an assault rifle at one point, and fired off a few shots before throwing the gun away like an empty coke can. He did legsweeps, misty blasts, and a few sultry neck nibbles. Later we also saw him summon a magical blood hex on the pavement below a poor bystander, who promptly exploded in a shower of gore – just one of the powers of a blood mage vampire class.

As action-packed as it was, there was sometimes something a little floaty about the melee combat, at least from a viewer’s perspective. This has often been a curse for studios, because first-person face-smashing is difficult to get right. It reminded me of the panicked streetfights you sometimes get into in the Dishonored games, but I’ll have to reserve judgement, since it was hard to get a sense of our vamp’s misty magic powers or skull-crunching hammerfists without actually laying hands on the controls myself.

“One thing that we’re very focused on with the combat... is really conveying to the player that they are a vampire," says Leiker, "and being a vampire is very different from playing a human. You’re stronger, you’re faster, you perceive more, but you also, you know, have needs that have to be met.

“We’re very interested in letting the player play as their version of a vampire.” 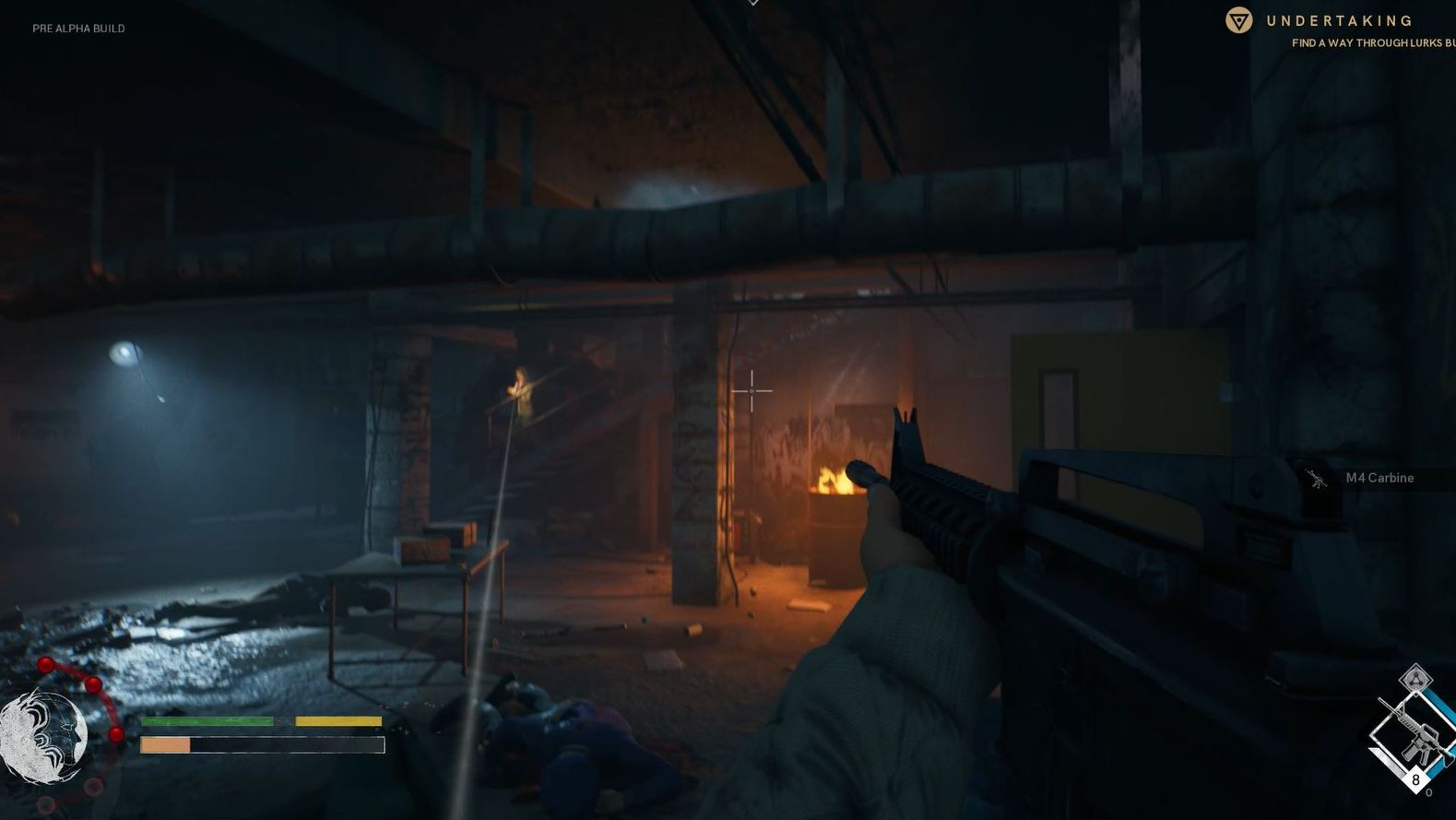 This is the immersive sim coming out to play. Fighting your way through things is one option, sneaking through the shadows is another. Outside of open combat, you can stand in a "blindspot" and press a button to attract people with your vampiric charm, then slurp up their neckjuice. And if players “just want to talk their way out of something,” says Leiker, “they absolutely can do that as well.”

But not for the whole game. A recent Cyberpunk interview promised that you could play it all without killing anyone (a claim obviously yet to be tested). So I asked if it was possible to play through Bloodlines 2 without violence at all. Could you talk your way out of trouble throughout the whole thing, like some kind of magic improviser of the night? Well, no. Not really. But the important thing is that you can often try, says Ellison.

“You’ll get in some scrapes,” she says. “But you can essentially try to talk your way out of everything. We try to use as many options to just talk as possible. Like, that’s the point of the game, we want the narrative to be very very strong.”

“But it is not possible to not have your hands dirty in this game,” adds Ali. “Obviously, whichever vampire you choose to be, you’ll have those possibilities [to talk] but there will be moments when you have to make the tough decision and start to fight people.”

There was a lot more detail in the demo, which ended with us tracking down our boy Slugg and finding out he’s not such a bad dude after all. Just somewhat bitter, and a little cryptic. I’d tell you all about it, but it’s E3 and I have nine billion other games to write about, so I’ll have to leave it there. If you’re all good vampgirls and vampboys maybe uncle Matthew in the video department will show off some more of the dialogue choices and neck-munching. 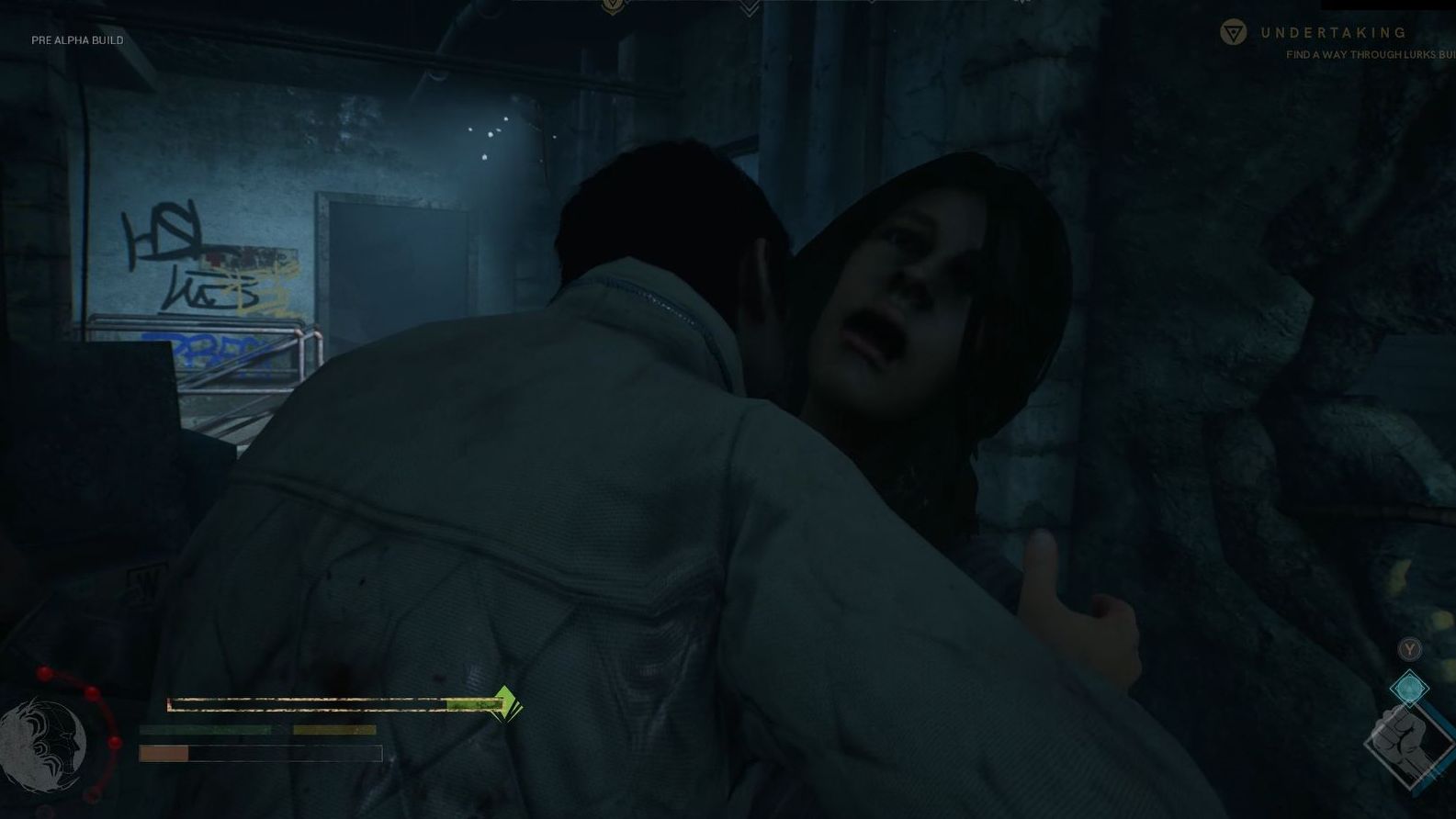 One last tidbit before I go though. I asked if there would be any returning characters from the original Bloodlines and received a rock hard “not telling”.

“We can’t say for certain at the moment,” said Ellison, “however we are not saying no, and that is all you are getting, Brendan.”

The Nosferatu in me smells a “yes”.

Disclosure: Cara Ellison is friends with several of us at RPS, but she laughed at my idea to put a vampire Uber driver in the game, so I'm not one of those friends anymore.