Action RPG meets MMO Breach is currently finding its feet in early access. It’s the sort of thing that will definitely be someone’s favourite game, if only they a) realise it exists and b) can figure out what it is. Currently the main barrier to this seems to be that it’s wrestling with ongoing performance issues; Matt really enjoyed playing its asymmetrical PvP as the Veil Demon, but found the game itself to be a “laggy mess”, and it’s squatting as a ‘Mixed’ on Steam, where most of the negative reviews are for crashes and framerates. The devs plan at least one major update a month while in early access, the first of which is coming soon. Hopefully it will fix the worst of these issues. But I digress.

Breach is having a difficult time right now, but when you look at the road to development, it’s sort of never had an easy one. Director Gabe Amatangelo has been trying to make it, or a version of it, for the better part of a decade, and mostly from inside EA. I spoke to him and Dallas Dickinson, the CEO of their new indie studio QC Games, at PAX South. It is unconfirmed if all of QC Games have names like detectives on American cop shows.

Breach pulls ideas from so many places that it defies categorisation. It's free-to-play, always online, and has "horizontal" progress via items and player experience, rather than levelling, so you can pick it up and put it down. The main thrust of the game is that four player-controlled hero characters, of customisable class, are up against one player-controlled Veil Demon, who can posses creatures, summon them, and drop traps to halt the heroes' progress.

Amatangelo's first attempt to make something a bit Breach-like was while he was at Mythic Entertainment. The way he tells it, this was when he became convinced that more action orientated combat, the kind that you see in Devil May Cry and Zelda, was going to be the future of RPG combat. “We had a small team, and we got sort of this arena combat thing going on,” he said, explaining that this was years ago, before the release of League of Legends in 2009. 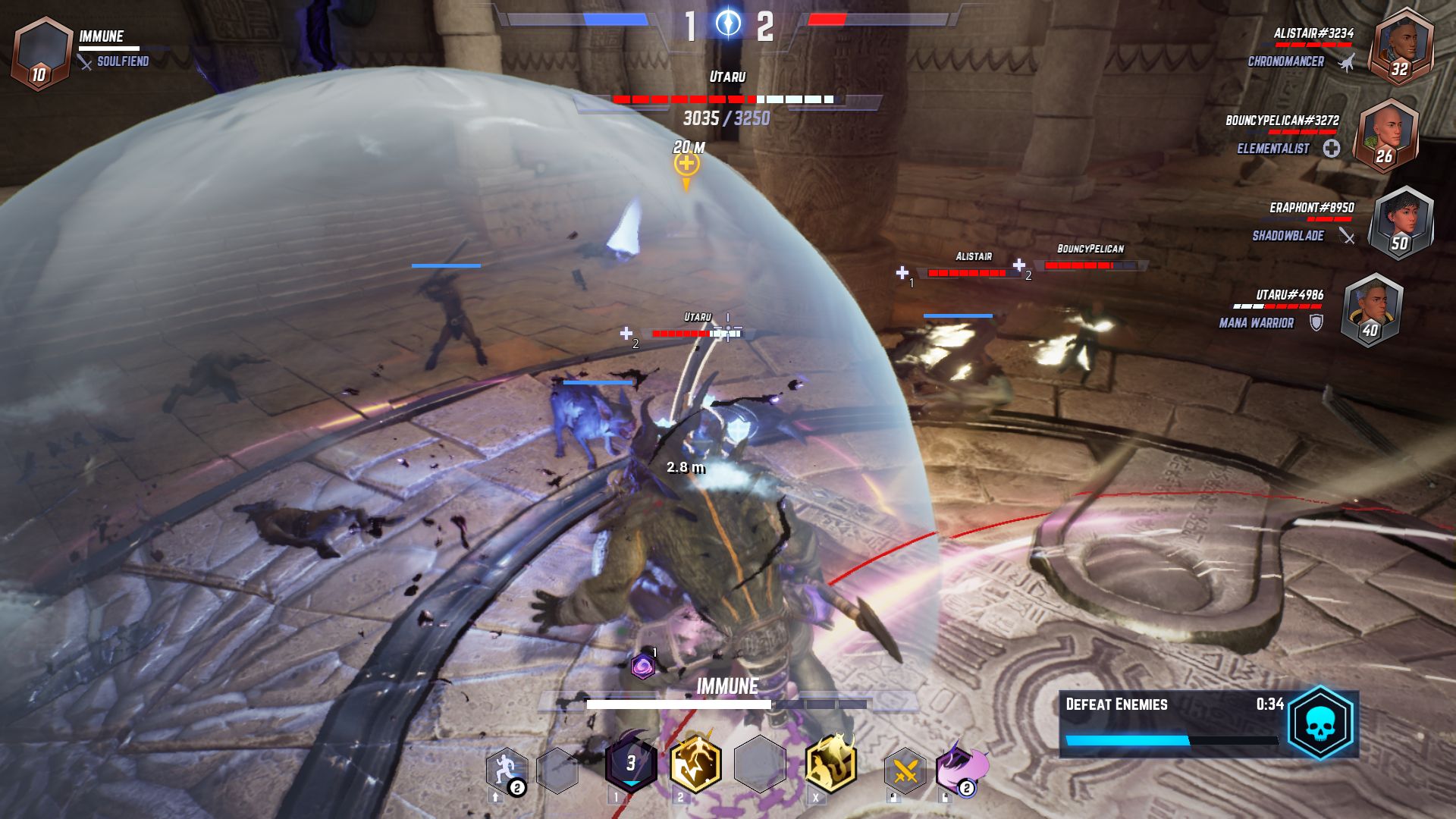 “And then suddenly, all of us there in that team at Mythic, we started feeling this like gravitational pull...and it was the pull of the Death Star! It was like 'Star Wars: The Old Republic! We absorb everyone in EA!'” he said, putting on a comedy evil overlord kind of voice. “They just took us, and it was like, 'Let us do assembly line MMO!'”

Being moved off the arena combat project to work on SWTOR was, said Amatangelo, his first real experience of working on a project that he felt everyone was excited about, that was killed because of business (emphasis all his, when saying it out loud). “It was like, 'Argh! But I'm in it for fun!' But, bottom line is business.”

Dickinson was a producer on SW:TOR and says the joke was that he was that meme of Gary Oldman in Leon screaming “EVERYONE!” because of how many staff at EA were brought on; “I ruined Gabe’s life, absorbed his dreams.”

SW:TOR transitioned to free-to-play in 2012, after subscription numbers fell. Dickinson describes a kind of mood, an initiative at EA around this time that he thinks was probably evident at other studios too. The new console generation, the Xbox One/PS4 era, was about to happen, and everyone was wondering if this would be the gen to crash and burn. “On the positive side, EA's leadership kind of across the board was doing forward looking,” he said, explaining that EA identified that PC gaming is never actually dying. There was space in regions like Asia, there was space for more free-to-play models. And because SW:TOR had recently done that, it made them the thought leaders within the company. It was a second bite at the apple for Amatangelo.

Shadow Realms was announced by BioWare Austin in 2014, an action RPG where four player-controlled heroes played against one player-controlled Shadowlord. The heroes had different classes and special abilities, while the Shadowlord could possess creatures, summon them, and drop traps to -- hey, wait a second! The team showed it off at Gamescom that year, and got a few show awards and some positive reactions. “Then EA actually just changed strategies,” Dickson said. “Anything that was in that PC, maybe free-to-play, maybe lower cost thing, kinda went away.” Shadow Realms was cancelled in February 2015; in April of that year EA closed down four other free-to-play games.

“It was round two on business decisions crushing-” Amatangelo started to say. “Not bad business decisions!” interrupted Dickinson. They weren't. The console generation turned out to be really successful, so EA quickly pivoted to that instead. “Yeah, I don’t disparage anyone,” said Amatangelo. “It made total sense.”

They genuinely don’t seem bitter, either. We love to hate on big businesses for internally crushing creativity, but big businesses gotta big business. People credit EA for destroying Dead Space and forget to credit them for creating it. No need to hate EA specifically when it is impossible for anyone to live free, ethical lives under capitalism, is what I'm saying. But at the same time, if your passion project gets shitcanned, does it feel better if you’re told it’s nothing personal? 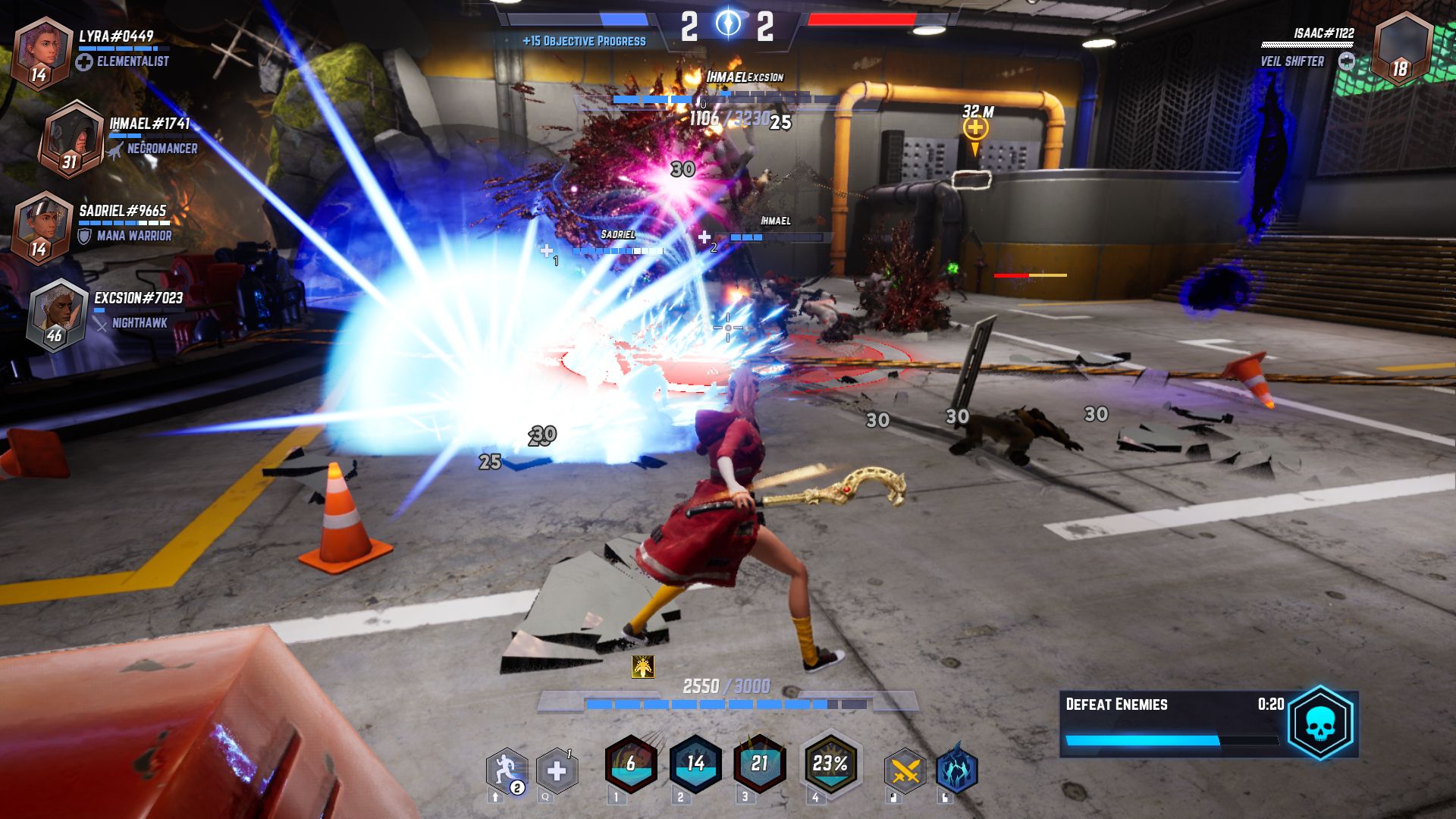 Breach does sound like a pretty hard sell for a conventional, huge studio. It’s an action RPG trying to emulate dungeons in an MMO, but also mixes in a bunch of MOBA stuff. There's a little Dragon Age in there, a little Left4Dead, perhaps. It’s free-to-play but has a payment model like League of Legends (which is what the rest of the negative Steam reviews are about; the currency and reward boosts have been tweaked a couple of times already). You create your own character and choose a class, but can swap classes and abilities around as you like. “Nobody has made a game like this, so we can't say 'Oh yeah, the expectation for a game like this is x, y, z.',” Dickinson said, candidly, admitting that they are still figuring out how exactly their roadmap will work. Amatangelo described Breach as “The Super Smash Brothers of RPGs.”

I dunno, I guess I just love an underdog story as much as the next gal. Amatangelo and Dickinson both talked so fast and passionately about this thing they’ve been trying to make for years, and they both thumped the table and laughed and got excited. The first step is just people knowing it exists. Well, the first step is for the team to fix the bugs and crashes. Second step is people knowing it exists.