I jumped into the Call of Duty: WW2 beta over the weekend, and found that the series' leap back into the past applies to more than just the time period it's set in.

Before I go into the negative, I should make it clear that CoD WW2 [official site] is still fun in most of the ways that every CoD is fun. Shooting remains satisfying, with fast and frantic action that provides more immediate gratification than many of its peers. It's more focused, with no danger of getting lost in the 'war soup' of Battlefield or the complications of character choice in Overwatch. Its progression systems do a good job of keeping you on the hook, drip feeding you new weapons, scorestreak rewards and perks that combine to open up different playstyles. In short, there's definitely still room for CoD's brand of multiplayer FPS.

But is there room for CoD WW2? I'm not so sure. In reverting to a historic setting, Sledgehammer Games have stripped away mechanics that elevated the futuristic setting of recent CoD installments above their predecessors. And yes, I do mean that literally: as we've written about before, jumpjets and wallrunning are both additions that changed CoD's level design for the better. It also allowed the game to move away from drab and dreary looking battlezones in favour of a more vibrant and colourful palette. By comparison World War 2, you might remember, was pretty brown.

So, what does WW2 have to offer that can compete with jetpacks and wall running? The best contender for me is probably 'old fashioned bolt action rifles'. Each class (called 'Divisions' here) has abilities and advantages that unlock with play time. The starting one for the sniper class allows you to hold your breath while aiming, which eliminates sway and makes everything apart from what's in your crosshair fade into darkness. It muffles the sound of the carnage around you too, generating oddly peaceful moments before being plunged back into the fray. 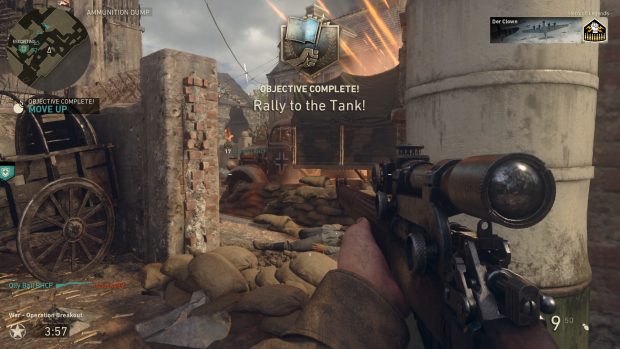 The thuddingly named 'War' mode is the biggest addition to the series, and plays a lot like a smaller, one map version of Battlefield's Operations. It involves one team trying to take a series of objectives while the other defends them. Those objectives aren't just abstract capture points, they're actual features of the map: a house that needs storming, a bridge that needs building, an ammo dump that needs destroying and a tank that needs escorting. It provides a more involved structure that's been lacking from any mode CoD has dabbled with before, along with a welcome dose of variety within a single match. You have to wait a few seconds (gasp) before spawning, which combined with the more objective orientated play makes kills feel a bit more meaningful.

There was only one map for it in the beta, 'Operation Breakpoint', where the Allies ultimate goal is to blow up some Axis flak guns that are targeting their bombers. While I'm a fan of the mode overall, it does put even more pressure than usual on map design. That bridge building section can be a nightmare, as it forces the attacking team to lay in the open while constructing it. I found rounds often ended there with a victory for the defending team: as someone in the chat observed, 'Bridge too stronk'.

The mode also does away with scorestreak rewards, which is a sensible choice for a system that I'm still in two minds about. The rewards aren't as egregious as they were in early iterations of CoD, where the best players got given overpowered tools that they didn't need. Nowadays they're just given moderately powerful tools that they don't need, like single use molotov grenades or one-shot artillery shells. 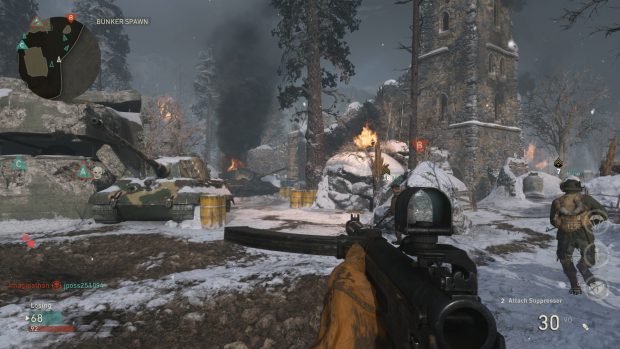 When respawning is as quick as it is, occasionally dieing to one of these weapons in a way that feels unfair doesn't matter all that much. I also can't deny that I've had fun wielding them myself, and the system does add tension to those moments where you're just on the threshold of earning a reward. I found myself missing those moments in War mode, but it could act as a nice sanctuary for players who don't get on with the scorestreak system.

The other modes aren't new to the series, with team deathmatch, Hardpoint and Domination all making a return. I was surprised there wasn't a free-for-all mode in the beta, as for me that's always felt like the most comfortable fit for a game which has - until War mode - never placed any emphasis on team coordination. Team deathmatch is what it sounds like while in Domination both teams battle over three control points, with each point held causing your team's score to increase. The first team to 200 points wins. Hardpoint might be the most interesting besides War mode, which features a single capture point that randomly changes position every 60 seconds. It does a good job of constantly shifting the flow of battle around the map, creating more varied situations than simply attacking or defending as players race to the next point. 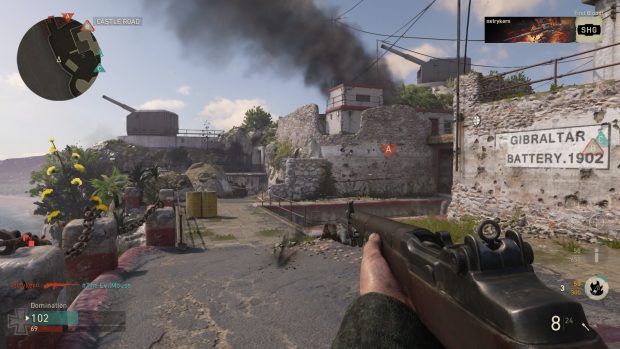 As I've already mentioned, most of the maps aren't much to look at. The bombed out city of Aachen, the concrete and dirt of Point Du Hoc and the snowy fields of Ardennes Forest all offer much the same assortment of greys and browns. The map set against the rock of Gibraltar provides some relief from all that - it's a much brighter battlefield where the sun is actually shining.

Trouble is, the sun's still shining in Infinite Warfare and Black Ops 3, and I'm not yet convinced WW2 will be worth playing instead. There's an argument that it's worth having variety, and I can imagine some might appreciate a return to a less mobile, more traditional Call of Duty, but based on the beta it feels to me like a step backward.

Call of Duty: WW2 is due out on November 3rd.