I knew Caves Of Qud was an ambitious old-school roguelike that's in early access. I didn't know you could start as a teleporting multi-limbed psychic pyromaniac with hooks for feet.

I've never played Qud before, but I've had my eye on it for a while. What better way to tell you about the procedurally-generated villages and quests it added in Tuesday's update, I wondered, than to jump in and try to find one of them?

How hard can it be.

Before I get started, here are the stone cold facts. It used to be that every life kicked off in the village of Joppa, "with handcrafted architecture, history, customs, NPCs, and player quests". Since the latest update landed, you can now start in a random village where everything I just mentioned is spun up by algorithm rather than man. Those villages have also been sprinkled around the world, so my plan is to start in Joppa and venture out until I find one.

I spend ten minutes wading through the help index, absorbing some details about ego modifiers and mutagenic tonics while forgetting many more. I finish making my many-legged but hook-footed character, then wander up to the head honcho of Joppa.

The chief (or whatever fantasy synonym for chief was at play) tells me there's work to be had ridding some moisture farmers of pesky cave vermin, but more than half of those words sound boring so I ignore it. I've got to roam somewhere if I want to find a village, so I roam north. 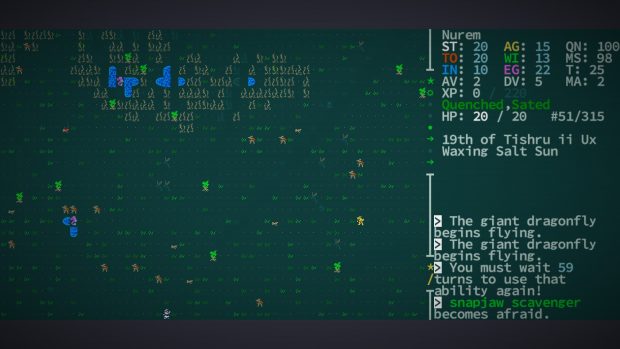 Within seconds, I'm in a field packed with over a dozen snapjaw scavangers, brutes and warriors. I fix the closest one with a menacing stare, and he runs away terrified. I then do the same.

Three of them follow me, and in an attempt to teleport to the safety of a friendly farmer I accidentally burn him alive. A hot tip for any other aspiring teleporting pyromancers out there: check which buttons you bound your abilities to before you use them. I do actually teleport, then I whiff my intimidate and proselytise skills by trying to use them from too far away. I decide to just keep running, and it's not long before my pursuers give up.

I go east, and get attacked by a crocodile. I try to proselytise it, but I either mess up the aiming or it's impossible to proselytise crocodiles. I try intimidating it instead, and it flees from me. So does the next one I come across, after I give it a mean look. 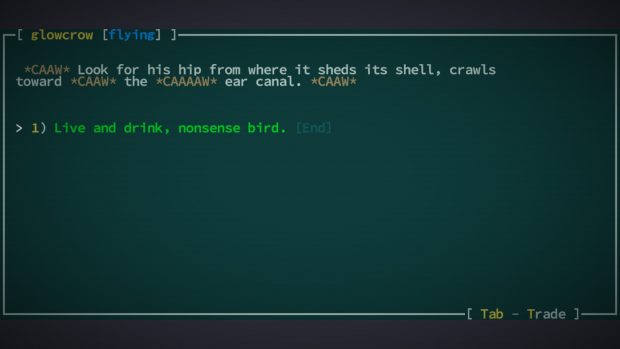 I pass through screen after screen without interacting with anything, apart from when I meet a glowcrow that initially looks like it's going to attack. Instead it just caws at me, while mumbling obtuse warnings about ear canals.

I find some walls, and for a few wonderful moments I think I've found a village. My diary informs me I've actually found Umor, and files the discovery under "ruins with becoming nooks". I see a shiny chest, and while rushing towards it I don't notice the boar rushing towards me. I give it my signature stare, and it runs away. The snapjaw scavangers behind it do not. 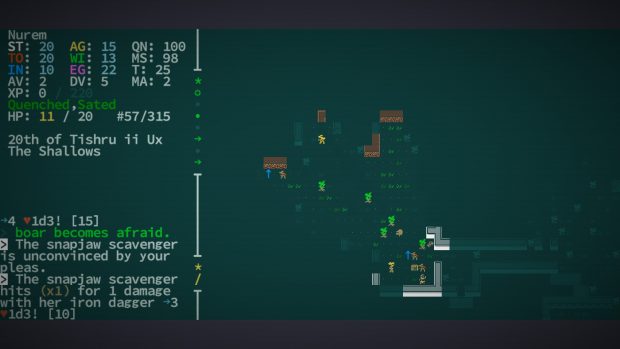 I grab what I can from the chest, then teleport away with a sliver of health. I've still a snapjaw chasing me, but I realise I've also got a staff I haven't been using and whack them a few times. They go down without much of a struggle, and I gain my first chunk of XP. The chest just contained some old tubes and a bow I don't have any arrows for.

I keep heading east and limp through more screens, almost dying to a boar which I manage to proselytise on the turn before it gores me. It turns out the animals in Qud are open to persuasion, and for a little while I run merrily along with my new boar pal. Another boar nearly kills me, but my friend has no problem turning on their own kind. The UI tells me I'm hungry, so I set up camp and whip up a meal from a "mercury chickpea" and an "old boar's right rear foot" that I find lying nearby. 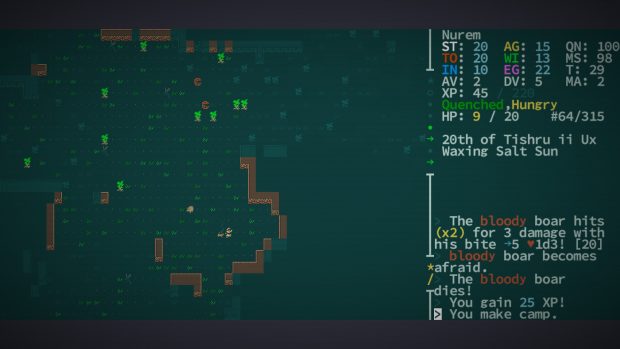 I walk past crowds of hulking horse-like creatures without incident, then succumb to the combined attacks of a rabbit and an irritable tortoise.

The game over screen informs me I've scored -369 points, and that the most advanced artefact in my possession was a metal folding chair. 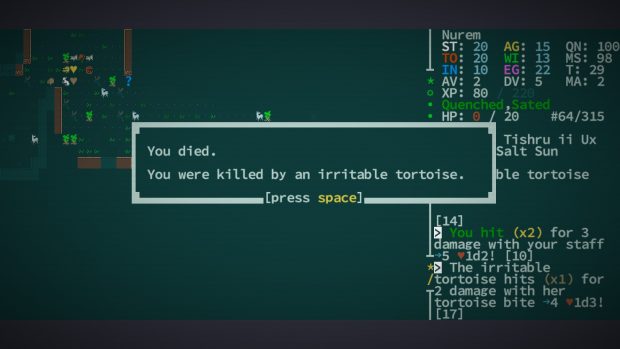 You're going to have to find those villages yourself, or else wait for me to write another diary. This was fun, and all I did was keep walking east. I'm tempted to just start in one of those villages next time, which all have "their own unique histories that are discoverable through various storytelling traditions."

The devs say they "don't have a strict timeline" for when Qud will emerge from its early access cave, but it will stay there "at the very least ... until you can complete the main plot".

Caves Of Qud is available on Steam Early Access, the Humble Store and--as of last Tuesday--Itch and GOG for £7/$10/€10.