If you click on a link and make a purchase we may receive a small commission. Read our editorial policy.
Developer: Moyuwan Games
Publisher: Coconut Island Games

I didn't revise in school. I didn't even take notes. Things either went in or they didn't, and there was no point pretending I'd get anywhere staring at them all day. Young Nate Elbow took much the same approach. Despite his natural talents dwarfing those of his dad (the famous novelist Brendy Elbow), his refusal to spend his final school year cramming all the subjects he didn't care about left him with a mediocre score at the all-important Gaokao, condemning him to a life in the terrible clutches of the games industry. There's definitely not a moral in that somewhere. It's fine. I'm fine. Stupid teachers.

This is the central idea of Chinese Parents, the phenomenally popular child-raising sim by Moyuwan Games, which has been recently translated into English.

Like anything in the genre, it bears an inevitable comparison to the beloved (if a bit creepy) Princess Maker 2, although it's far less sprawling and opaque. It's also, despite the 'strict parents' theme, and the way it intentionally sends up those obvious stereotypes, surprisingly forgiving. 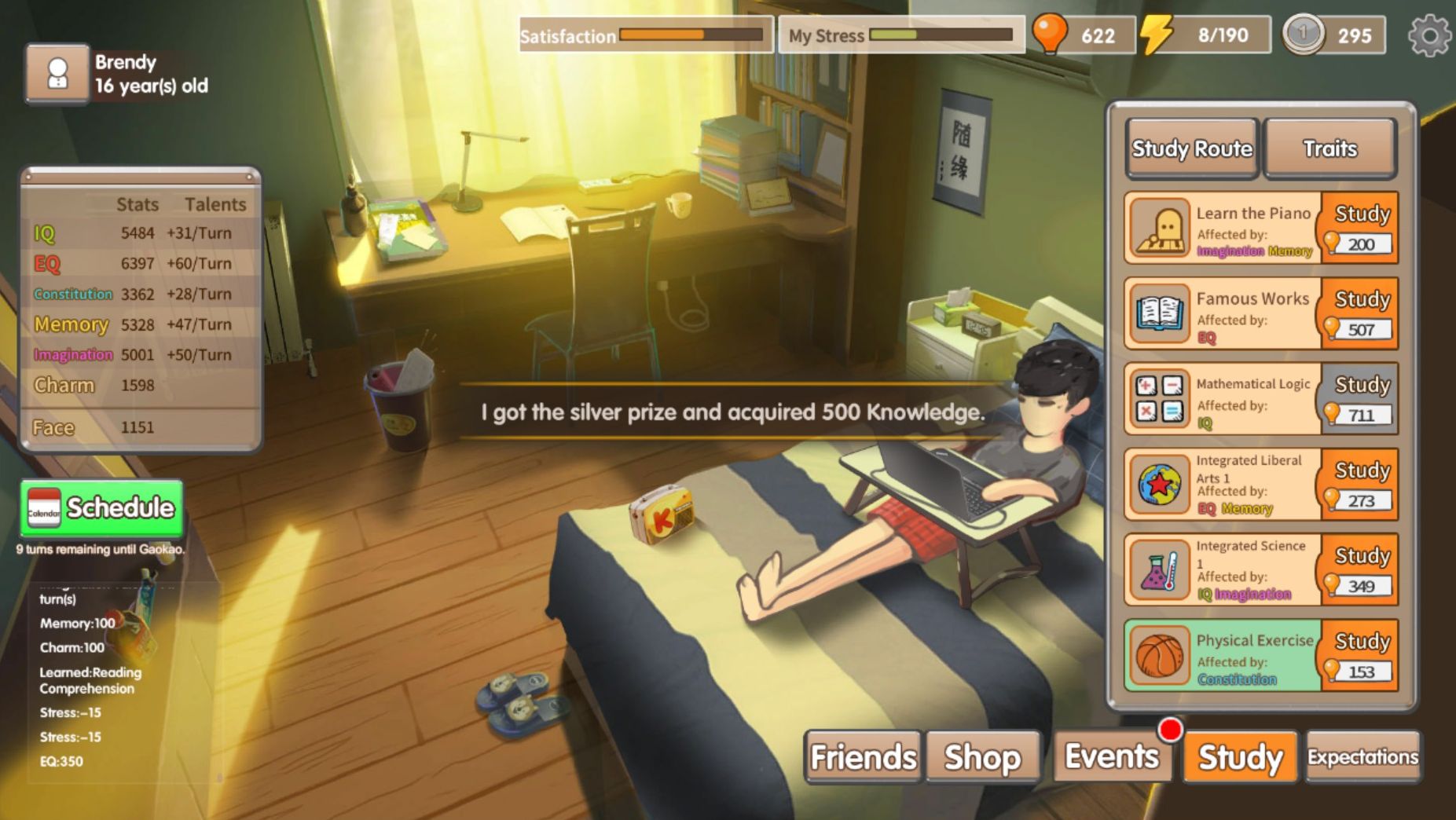 You take on a child's role as they grow from birth to age 18, at which point their fate is determined by the dreaded Gaokao. Over 48 turns you'll schedule study and play activities, unlocking more by playing a bubble-popping minigame to raise statistics like IQ, constitution, and imagination. Additional games and classes are unlocked by spending knowledge, which is gained by popping the right bubbles, responding appropriately to random events, and success in challenges like tests, talent contests, and student elections. Knowledge costs for a given activity shrink if you increase related statistics, so while a bit of cross training is necessary (Nate, for example, was an excellent artist but flunking History and Chinese dragged him down to average), it generally pays to focus on specific stats. If, f'instance, you're interested in pushing your sprog into computing, that skill tree will be cheaper if you keep raising their IQ and memory. As they get older they'll also want to devote some of their energy to pursuing a relationship. 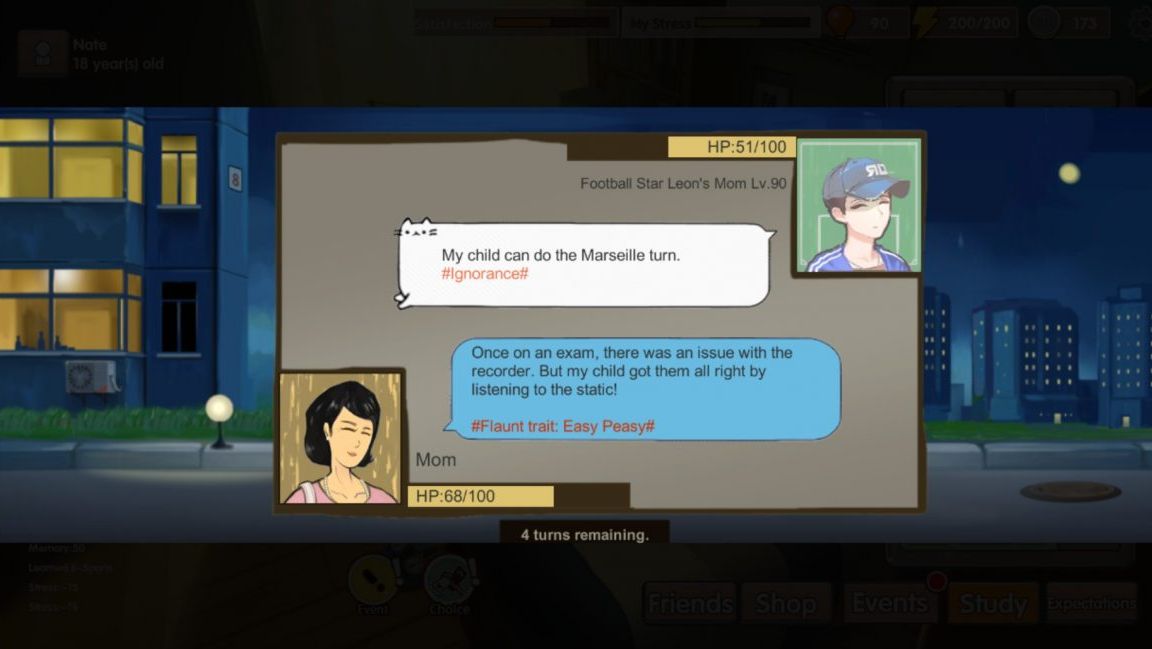 In principle you're meant to balance all this with your stress levels vs the generally opposed parental satisfaction, but in practice they're really quite easy to please, and lowering stress is as easy as scheduling one or two bits of play time (which also increase your stats, sometimes as much as study in the case of special activities unlocked through pocket-money or begging your parents) or buying some sweets. My first child, Bert Elbow (it wouldn't accept "Alice". Sorry Bertalice), was functionally illiterate and innumerate until she was about 7 while I figured out how the game worked. A series of F scores at school cost her parents 'face', but it's not clear what exactly face does in gameplay terms, and their satisfaction bar at the top was fine, and Bert was still showered with praise as long as she bribed them with a gift now and then.

A bigger disappointment is the underwhelming endings. Considering the whole life of a character leads up to the Gaokao, its outcome is limited to a few samey sentences about what personality ticks you picked up (over which you have very little control), what career you landed on, and an apparently random line about 3 of your friends, two of which have no interaction with the player whatsoever, and appear to be randomly generated. It's fun and surprisingly tense finding out what job you got, and whether you married someone good, but there are scores of activities and associated traits you'll spend hours building up, only for most of it to be discarded - Bert and Nate Elbow got exactly the same ending despite all their differences, simply because they were artsy and had a similar exam score. 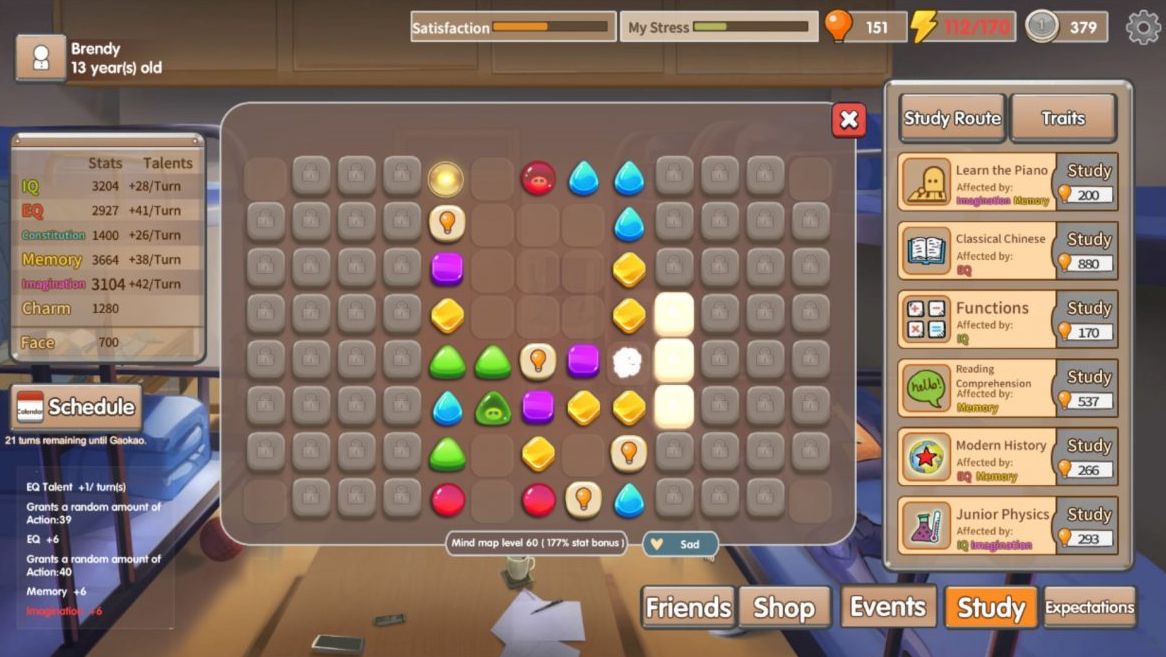 This is perhaps the point, thematically, but it's a bit of a wasted opportunity - even if the result is the same, some more varied flavour text would differentiate each playthrough. This is especially true if you adhere to your parents' expectations, as one of the central draws of Chinese Parents is that each child gains bonuses based on their parents' final statistics. These accumulate over generations, so when I tried to turn Nate into a muscleheaded philistine, my focus on upping his constitution was outpaced by the passive, per-turn increases in imagination, IQ and EQ granted by his artsy nerdo grandma and dad Brendy. Parents also place explicit 'expectations' on a child, some of which are based on their own interests, so a (cough, ahem, failed, cough) painter mum would expect their child to unlock the Oil Painting study at a certain age. But failing expectations doesn't really do much. Meeting them grants a nice stat bonus, but so do lots of other things that are much less demanding. It's probably best to treat them as an optional goal if you happen to be in the neighbourhood rather than going all out for them - it's very much a case of carrot over stick. In theory you can develop mental problems from stress or excessive punishment, but it never came up. 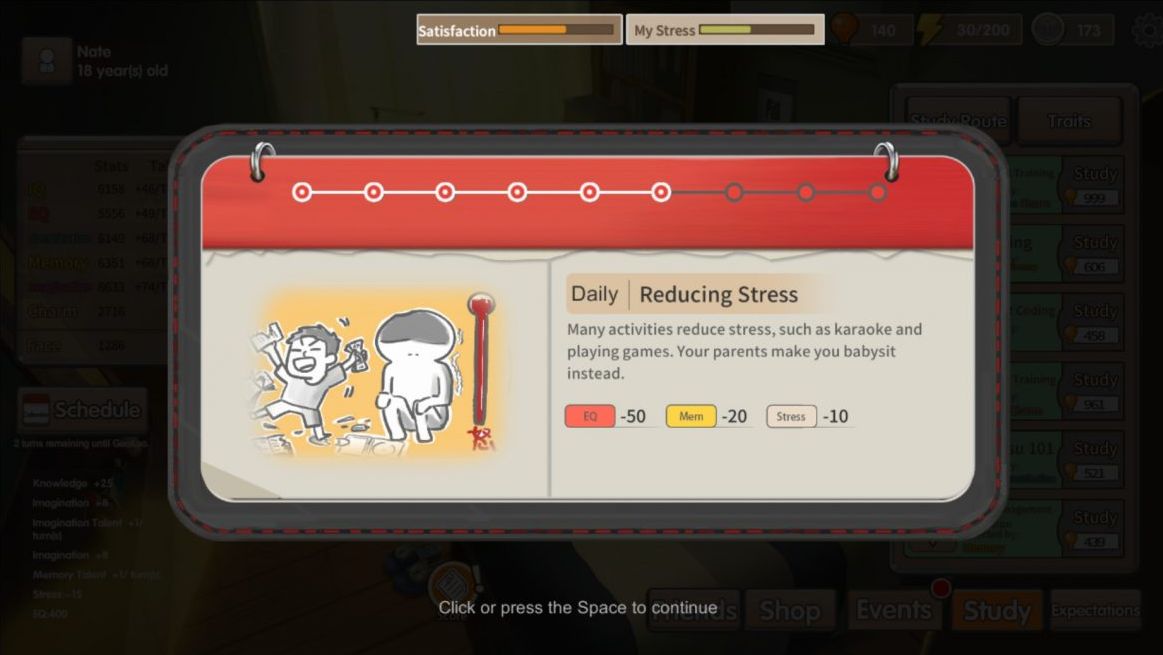 This is all deliberate, and again probably a deliberate thematic choice - excellence comes from social and cultural advantages and the passive background radiation of your surroundings. And in play terms it offers a great incentive for repeat playthroughs, as those passive bonuses are key to beefing everything up high enough to reach the best endings. And even if your fully grown sprogs end up acting much the same way as the placeholder dad you start with, it's a nice through line, where starting over entirely from scratch would be the point where a lot of players would check out after a game or two. 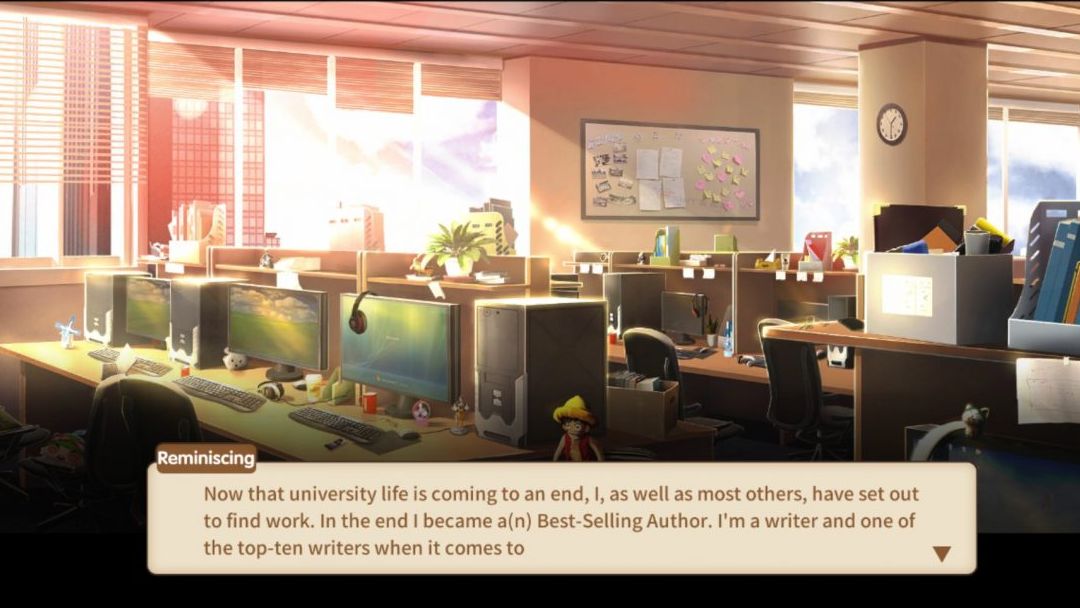 And this is at the heart of why, despite all this complaining, I'm absolutely recommending Chinese Parents. It's fun. It's tremendous fun, and while I was hoping for more room to experiment or completely mess a child up (sorry Dave, it was nothing personal), I still wanted - indeed, still want - to have another go. It's funny, it's accessible despite all its numbers and moving parts, and there aren't many games that get me so animated about a 9-year-old's school test results. The design is solid too. Even the match-3-looking bubble mini-game is weirdly compulsive and well-balanced between strategy, luck, and opportunism. It's a deceptively easy-going and good-natured wee thing and you should take most of my misgivings exactly as seriously as Nate took his Mum's moaning about his maths test. Ignore the miserable old bint, go play some games instead.