In Civilization, civilization is a competition. Land and resources are limited, and even those nations that don't expand through military might are attempting to climb to the top of the league table in other ways. Geography, technology, culture, religion, diplomacy – they're all, to some extent, weapons to be deployed, or at least arenas where an advantage can be gained. Culture and history are the clothes that Civ wears but it's not really about building an empire or a nation, it's about sharpening a knife.

The upcoming Rise and Fall expansion for Civ VI introduces several new playable nations, but the introduction of one civ has led to criticism from an unexpected source. Yesterday, Milton Tootoosis, an elected headman-councillor of the Poundmaker Cree Nation, spoke to CBC News about the inclusion of the Saskatchewan First Nation. He acknowledged excitement about the news and noted that historical chief, Poundmaker, is to be portrayed as working to build “a bridge between settlers and First Nations”. But he also voiced a fundamental concern about the portrayal: “It perpetuates this myth that First Nations had similar values that the colonial culture has, and that is one of conquering other peoples and accessing their land.” It's a concern that cuts to the heart of what Civilization has always been and - I hope - to what it could become.

No matter how many victory types are introduced, Civ is still a game about accruing more than your opponents, or reaching the finish line before them. Even the fact that the word “opponents” fits so neatly is telling: it's history as a race to the end and as much as I love the series, that aspect is something I've been critical of:

Even the meaning behind the name of the subgenre to which Civilization belongs makes it clear why Tootoosis might object to the First Nations being placed alongside the other playable civs. 4X is derived from “eXplore, eXpand, eXploit, and eXterminate”, a term coined by Alan Emich in 1993. It might not have been the game on Emich's mind (that was Master of Orion 2), but expansion into new territories and across continents, exploitation of resources and people, and extermination of rivals are all central to Civ. The series is synonymous with the genre and, by eXtension, with those verbs. 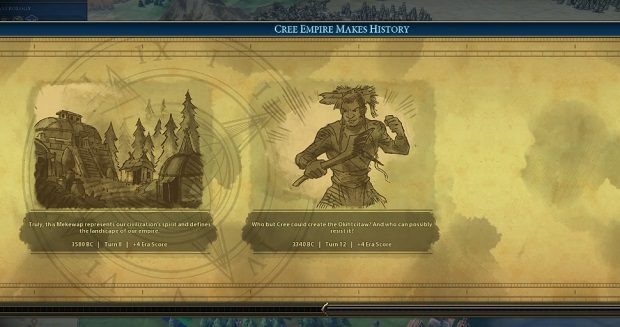 In part, I'd argue that those verbs became the driving force of Civ and so many other strategy games because of the way they neatly slot into competitive game systems, but I think it's also appropriate to ask whether what Tootoosis describes as the “values [of] colonial culture” are also part of the design. Strategy games often rely on conflict and conquest, either to provide objectives and impetus for players, or as the entire foundation of their being. Although there are exceptions, and grand strategy games such as Crusader Kings and Europa Universalis complicate matters, players of strategy games are usually expected to recognise that if you start small, the aim of the game is to grow.

It's as natural as running to the right in a platformer or picking up every gun in a shooter. How different might that be if fresh voices and ideas were invited to be part of the design process?

According to CBC News, Tootoosis says that “no one from the First Nation was consulted about the project”, though Firaxis' composer Geoff Knoor has written about working with The Poundmaker Singers for the Cree score.

Yes, multiple members of this group are part of Poundmaker's extended family! Clyde is a great, great grandson of Poundmaker's brother, YellowMudBlanket. Some of the songs you hear in the game Poundmaker likely knew and sang.”

What Milton Tootoosis seems to be proposing, rather than expressing condemnation of Firaxis, is that a similar consultancy regarding the broader nature of the Cree Nation's inclusion in the game would have been welcome. In the series' current form, with that continuing reliance on the 4X template, it may not have been possible to come to an agreement about a satisfactory way to proceed. These are conversations that should be happening though, where they can, so that studios like Firaxis can avoid repeating what Tootoosis refers to as Hollywood's “decades of portraying indigenous people in a certain way that has been very harmful.” Representation of cultures and nations in strategy games is a complex issue. From its beginnings, Civilization has represented native villages on the map as things separate from the actual civilisations. Sometimes they're aggressive barbarian encampments that exist only to fight and pillage, and sometimes they're static, passive tiles that always remain within their own borders. Commonly referred to by players as “goodie huts” because of the bonuses they give to civs encountering/consuming them, these villages are described in the Civilopedia entry for Civ VI as follows:

There's a lot to unpick there, including a combination of condescension and admiration, but it's the use of “cooperative (rather than competitive)” that is of particular interest to me. It's a direct admission that civilisations in Civilization are competitive entities. When an indigenous population receives an 'upgrade' from tribal village to city, or from non-playable goodie hut to playable civ, must they become competitive? Do they become part of colonial culture, the exploiters rather than the exploited?

We spoke to Civ VI's lead designer Ed Beach after the release of the game and he acknowledged some of the difficulties involved:

“Every time you’re designing a civ, you’re taking [Civilization V’s or VI’s] simple systems and you’re saying ‘well, in order to capture the essence of either this personality or this empire we’re going to have to take all those game rules, and we’re going to have twist them, and distort them, and change them in unique ways’, four or five times, for each of the forty civilisations we have in that game...”

And new civilisations are often introduced to bolster or complicate layers of the game that aren't working as well as intended. They have to fit the needs of those systems and rules, but in doing so they become subservient to the game's mechanics rather than informing them. And, eventually, no matter how the numbers and rules are shuffled, twisted and distorted, that brings every nation back to the 4X objectives of colonisation and domination in one form or another.

Civilization VI has been praised for the inclusion of a much more diverse cast of leaders and it's something that I've commented on myself. The diversity is often in the flavour of the game rather than in its systems though. Those animated leaders serve the mechanics that drive everything forward rather than being meaningful in and of themselves. If Firaxis want to continue the current progress toward representation of cultures as unique entities with their own ethics, philosophies and ideals, they'll need to do more than bend the rules that have served Civ for decades; they'll have to start breaking them and replacing them. The 4X core may suit some imperial and colonial powers, but it is clearly not fitting for all nations. Eventually, if the series is to continue with its exploration of the diversity of cultures and people, it will have to reject the centrality of exploitation and extermination entirely.

That's a daunting task but it's also an exciting one. Tootoosis says, “We are challenging any individuals or groups that have taken into their possession artifacts — or stories in this case — for commercial purposes and for profit without consulting our community." Consultation with a community is a possibility for dialogue, and where there are possibilities for dialogue with leaders and representatives about the complexities of representing their ideologies, faiths and cultures, that too represents exciting opportunities. Hopefully, the diplomatic route can be taken in this instance and in others, even if the conversation may be happening a little later than would have been ideal.