I never played Secret of Mana 2 on the Super Nintendo, but I could recognize its trees in a blink. I saw them in countless other games, their lush branches decorating the corners of fantasy worlds filled with magic, dragons, and bugs. Oh, so many bugs. I've never played the first Star Ocean, the Suikoden series, Terranigma, or Chrono Trigger. But I know them. They are games I’ve always appreciated in a disjointed state, their plants and furniture dissected and laid out on sprite sheets like tiny organs on an autopsy table.

I saw all this because, when I was a teenager, I illegally ripped art assets from commercial games. 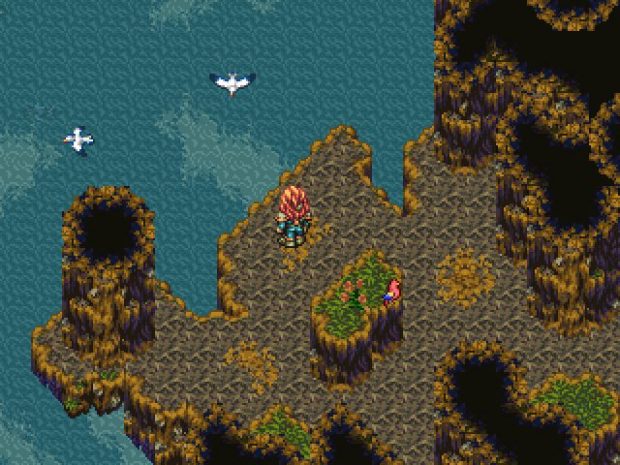 Before 2005, the amateur game-making tool RPG Maker didn’t have an official publisher. The community thrived in the shadows, a bunch of teenagers armed with cracked, unofficially-translated copies of the engine, and one shared dream: making games as cool as Final Fantasy. Teens with no preparation, no guidance, and no bloody idea of what they were doing.

RPG Maker is an intuitive tool, and people were quick to master it even without official support. But all games need art assets to shine, and most of those teens had never used graphics software more complicated than MS Paint. That’s why they - we - turned to stealing art from other games.

Ripping assets was not a new concept to the pre-pubescent indie scene. GameMaker users were ripping as well, and some famous GameMaker games from that era, like Ark 22, feature a number of ripped and edited graphics. Ripping from commercial titles soon became an integral part of the early RPG Maker days.

SNES games were especially treasured, because the console’s limitations were similar to those of RPG Maker 2000: small sprites, 256 colours, a restricted number of animated frames. Soon, libraries like the charas-project were born to share graphical assets. Art and music assets were ripped, edited, combined. However, few people were willing to make and distribute completely original resources. Without a way to encrypt games, users were quick to cannibalize every new scrap of original content. Art was often stolen without permission or credit. 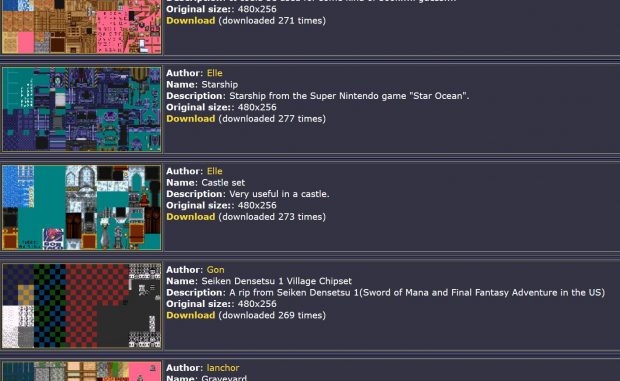 Stealing art from other games may sound like the lazy route, but ripping was hard work, in its own way. Websites like The Spriters Resource and Sprite Database helped you to acquire materials, but when you found an obscure Japanese game with nice graphics you wanted to use, there was only one possible solution: you’d download the ROM, open it with an emulator and learn to use the tools the emulator gave you, like toggling layers on and off to isolate a character or a background.

My obsession was Ragnarok Online. With the release of RPG Maker XP, the graphical capabilities of the engine expanded, and the big, detailed sprites of Ragnarok were considered the pinnacle of RPG Maker art. I spent hours messing with obscure homebrew programs to extract graphics from the game client, and learned the ropes of Photoshop (which of course I pirated) to put everything together.

Behold the results of my hard work: 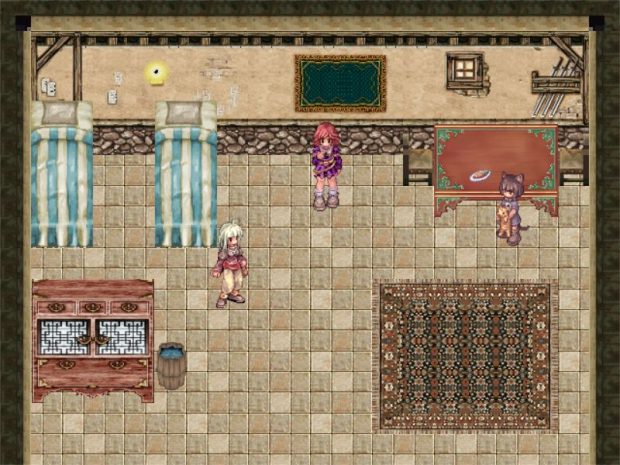 13-year-old me was so proud of this terrible screen. It was cool to be a ripper. Rippers helped friends to make better games, contributed to the community, and messed with software that was considered advanced by most users. Was it totally illegal? Of course. Did anybody care? No. I doubt many 13-year-olds had any clue about copyright law. But most importantly, the concept of profiting from our illicit activities didn’t even pass through our young and stupid minds. We were just kids who wanted to make pretty games. 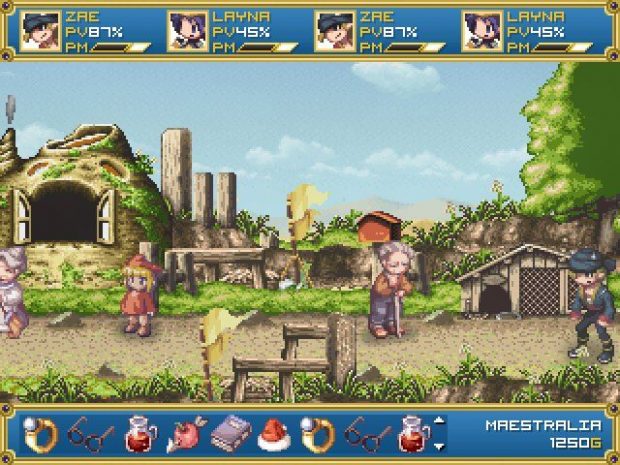 The decline of ripping happened for a number of reasons. People grew. Communities tightened. And the release of RPG Maker XP meant that old resources couldn’t be used anymore. People started sharing what they could. Making small elements was less intimidating than pretending to be a real artist. A single shirt. A new hairstyle. A pair of shoes. Character generators and templates started floating around, offering pixel people to dress-up like dolls. The Half Kaizer template was one of the more widely used. Somebody made the default body and other users made clothes and accessories to dress it, putting everything together in a now-dead online generator. Games such as Project Z made use of this art style.

We started by tearing games apart to make other games. We turned to glueing fragments together to give a brittle shape to our visions.

New art was also coming from the Japanese community. Huge resource packs, like those called the "First Seed Material tilesets", were discovered by English-speaking users and shared around. Most of this work is now lost, pages upon pages of art eaten by the death of communities, websites, and image-hosting servers. I remember when Imageshack died, and whole forums turned to dust. What survived is still passed around, still widely used even in commercial games like Ara Fell. 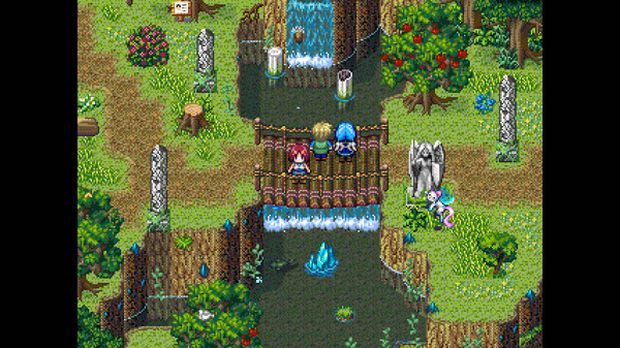 Then RPG Maker later got a publisher, Degica, which tackled asset ripping while offering high-quality asset packs at the same time. The bloom of Steam Greenlight promised everyone the occasion of becoming a professional game developer, and people were quick to understand that ripping assets was, in many cases, not worth the effort anymore. 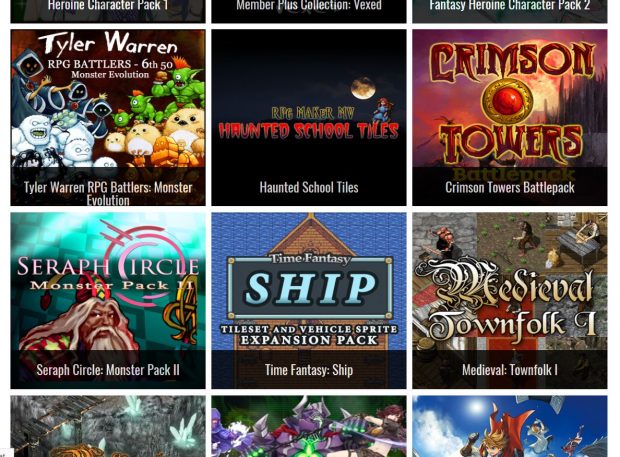 Ripping assets from old commercial games wasn't just a way to easily acquire art and music, but also an expression of love. You are loving a bunch of pixels so much you have to make it a part of your world. You decide that older work still has value, and deserves to be shown to new people. I think ripping, when done with respect, is an act of love. Even though some might say this love is not respectful or reciprocated. 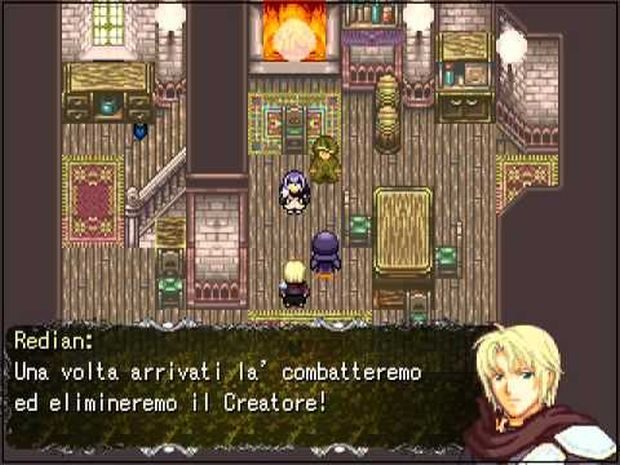 Videogames are a relatively young medium, and yet their preservation is already a critical issue. Publishers and developers are fiercely protective of their intellectual property, but when they don’t care about a franchise anymore, that entire series risks up ending in a legal grey zone, impossible to be bought or played. No One Lives Forever is just one of the most infamous examples, a masterpiece that got lost in a tangle of bureaucracy and disinterest.

GOG gave many old games a chance to shine again, but many remain in the murky waters of abandonware. People often feel OK about downloading those old, forgotten games from clandestine websites, but using old assets from forgotten games in your own non-commercial endeavour is still a taboo. Wouldn’t it be nice, though, to salvage whatever we can from our past? To celebrate it in a new form?

When a work enters the public domain, everyone becomes free to change it, redistribute it, and use parts of it for their own creations. In the world of literature, this freedom gave birth to literary mashups, like Pride and Prejudice and Zombies, and to new novels featuring borrowed characters, like The Wide Sargasso Sea. It’s a form of fan-fiction, in a sense (another kind of homage that is getting difficult for videogame authors, with more and more projects taken down by cease and desist letters).

Different nations have different regulations regarding the time needed for a work to enter the public domain. According to the laws of the United States, where most games studios are located, works enter the public domain after 70 years from the author’s death. Or, in case of companies, 95 years after the work’s publication (unless Disney pulls off another shenanigan to save Mickey Mouse once again). It’s an awful length of time, and it hurts the preservation of a medium tied to ever-changing technologies. We are already losing millions of games thanks to the discontinuation of Flash. Will our computers even be able to run games made 95 years ago?

Unable to access their own past, videogames have turned to other mediums. Aviary Attorney uses Victorian children's books to paint its story, and Four Last Things gave life to Renaissance paintings. 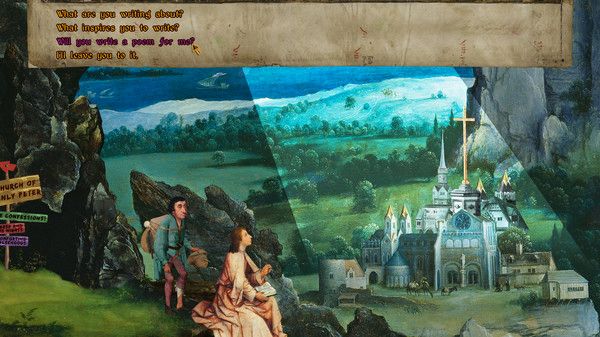 Pop art got Andy Warhol and endless replicas of Marilyn Monroe's face. Songs have covers and remixes. Novels have fan-fiction. Moms have decoupage. Will games ever be allowed to have the same freedom?

We’re used to seeing old games being remastered and rebooted. I hope one day we will be allowed to remix them.