I've been playing the closed beta of Conqueror's Blade, a lavish medieval warfare MMO from a team led by assorted Halo alumni. It arrives with eerily similar timing to that other big-scale medieval game Kingdom Come: Deliverance, but entirely multiplayer rather than singleplayer, and is all about bundling together hacky-slashy third-person tropes with a massed-army siege mentality.

Total War has made its own attempt to provide a boots-on-the-ground view of its enormous historical skirmishes, but 2005's Spartan: Total Warrior wasn't exactly a crowd-pleaser. Here's a fresh take on playing as a general who gets their hands oh-so-dirty.

This stage of the beta, which only runs until Feb 4, has one foot in the world of startling technological accomplishment and the other in the world of glitchy strife. My character has an invisible or psychedelic face depending on where the camera is, for instance, while weird, spiky artifacts fluttered unpleasantly across the screen at all times. 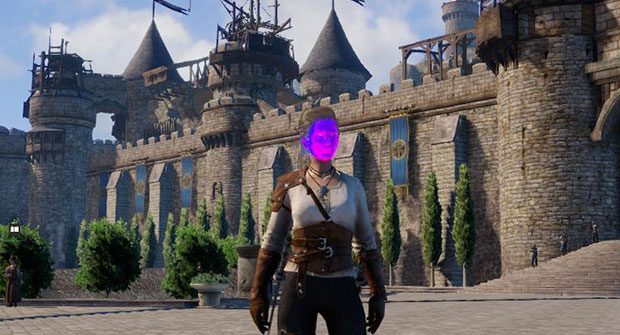 Nonetheless, it's quite a sight to wander straight into an online game that casually pitches massed armies against each other, then folds battering rams, siege towers and trebuchets into the mix.

The big, crunchy, NPC-heavy online thunder has been somewhat stolen by Ubisoft's For Honor, whose halting success surely gives the makers of any other historical warfare action game pause for thought, but this is a very different proposition.

There are similarities, at least in the broadest strokes of your selecting a class then haring about manually stabbing (or, in this case, sometimes shooting) hordes of people while accompanied by a horde of AI-controlled followers, and running on the ol' gear upgrade treadmill to boot. However, Blade takes an altogether more strategic approach, with a big emphasis on doling out formation orders to your lads and directing them to use various siege equipment once you fancy a punt at snatching a castle.

It's not total Total War by any means, but a working knowledge of shield walls and column vs row formations will take you far. Quite a lot of it, in my limited experience to date, involves repeatedly ordering your crew to follow, charge or grab some equipment, with actual battles descending into a frantic melee, you yourself charging around the outer perimeter, hacking at people's backs. But this is based on my early, unskilled forays, and, going on the General chat channel, it gets a lot more involved and a lot more rock, paper, scissors (it feels weirder every time I write that) in terms of the NPCs you bring with you.

It doesn't describe itself as an RPG, and it's fair to say that it's light on stuff like skills and quests, though you will be levelling up and earning or buying gear upgrades, like swords which deal more piercing or blunt damage and all that jazz. From what I've seen, it has plenty of numbers but, out on the battlefield, the results seem to come down to overall stabbiness more than anything. But that's low level; I can't speak to whether I'll be uselessly poking at armoured spearmen further down the line if I don't happen to have the right armour-piercing stick.

It's strictly structured as a PVP game, with various factions vying for control of a large open world in a way that evokes Planetside's legendary push-and-pull. Though you can somewhat opt out of that broader war and just working on levelling up your character and their army, there is no PVE element to speak of at present. 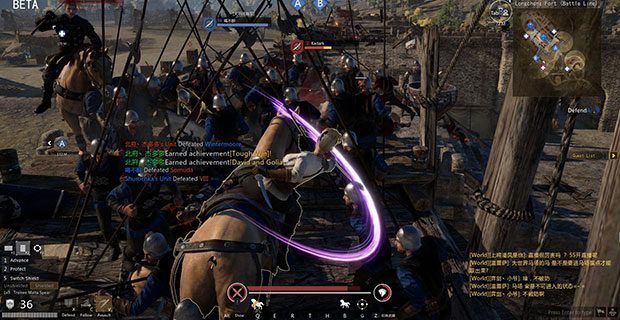 If you're looking for a fight, you've two options. Quickest and with the most spectacular results is Join a Battle, which entails clicking a big red button then waiting on a queue screen, with no option to do anything else while you twiddle your thumbs. Those waiting rooms are just one way in which this evokes decades-old MMORPGs.

The battles, when they come, play out like some enormous historical take on Battlefield. You've all these players with their several dozen followers, effectively playing the world's biggest game of capture the flag. You have to storm the keep, which involves slaying enemy soldiers and players and/or smashing down gates with battering rams and mounting ramparts with siege towers, and once inside you need to hold control of a capture point for sufficient time.

Alternatively, you can roam a large but flat, almost Google Mapsy exterior world, in which you and whatever soldiers you brought with you will almost almost certainly end up in a fight with someone else and their gaggle, either by chance or by moving into rival territory. This screen also enables you to 'forage' for resources which you can spend on buying and upgrading soldiers, as well as funding more ambitious outings.

Technically this part of the game counts as a sandbox, but in practice it feels vaguely like a real-time version of a Total War or Civ campaign map. It's not exactly getting out and exploring, really, though I'll be interested to see what it's like once the playerbase is fully stocked. That said, it's not exactly a wasteland right now - there's a worrying number of high-level players already, and it's one of those games where someone ten levels above you is effectively invincible, so do be careful in that overworld. 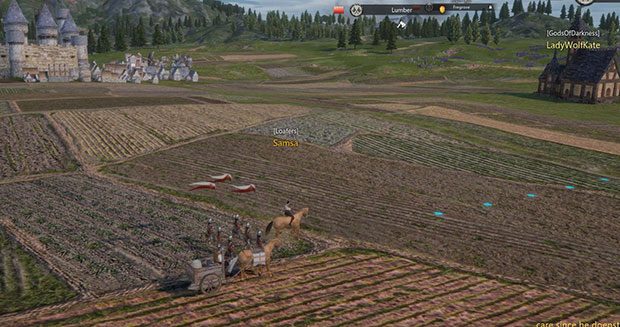 However you get into a fight, you'll then need to manually control your character while simultaneously doling out orders to your units. It's a great concept, realised at scale, but right now it's definitely feeling a little on the sterile side. The menus, of which there are many, are deeply inelegant and cursed with all sorts of overlapping terminology, too.

There's a certain undercurrent of the grindy Eastern MMO, of the sort that briefly scooped up a lot of folk jonesing for a post-WoW fix back in the mid-noughties, from how blandly it presents hubs and shops and faction quests, to the overwrought array of stuff you need to find or buy in order to recruit or upgrade your army. And there's the very harsh level gating. As I say, facing off against a player ten levels higher is suicide, but what I don't know is how it'll all flatten out once everyone's high level and the difference is in the specific units and equipment they wield. 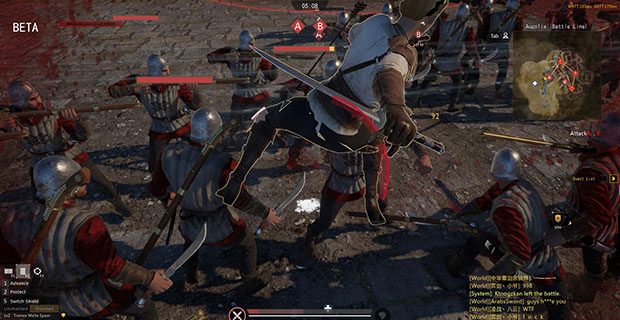 Despite its promise of this big sandbox world caught up in an endless territorial war, it all comes across as quite contextless, just a whole mess of anonymous folk trying to kill each other rather than anyone actually striving for anything. (Although the chat channels featured a lot of sometimes ugly boasting about how the English-speaking playerbase had currently given the sizeable Chinese contingent what-for)

It's a hell of a spectacle, and it's wonderful to see actual armies duking it out from such a close perspective, but I came away feeling it's currently too much of a rat race of grinding out numbers for my tastes. Yeah, it does realise a boots on the ground perspective of Total War's massive battles, but in my experience so far, it's more a test of how much time you can put in than of military canniness.

This stage of the Conqueror's Blade beta runs until Feb 4. You can apply for a key here, though there is a waiting list. The full game does not have a release date as yet.