There's already been a lot of talk about the relationship between Remedy Games' Control and Alan Wake. Control is a game where alternate dimensions have begun creeping into our own, and among the many Easter Eggs that this narrative device allows for are a couple intriguing callbacks to our Alan. These come in the form of Altered World Events, or AWEs - those damned leaky dimensions - and the supporting in-game documents which report on these events. From a secret area that triggers his appearance, to documents that track his movement in the aftermath of the 2010 game. Very curious.

Now in a newly released content roadmap, the developer appear to be teasing an official Alan Wake crossover expansion coming to Control. 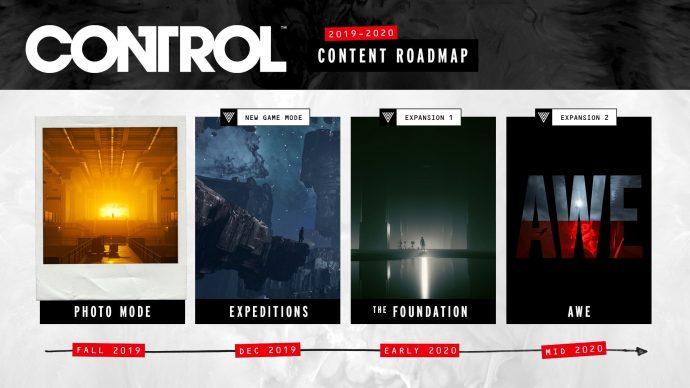 So far it's known only as AWE. Slated for sometime mid-2020, AWE will follow the release of Control's first bureau-investigating expansion The Foundation. There's probably something to be read into the fact that Alan Wake and Altered Worlds share the same initials. What's interesting though is the game's graphic design. The letters AWE are split horizontally, with art from Control taking up the lower half of text and art from Alan Wake - see that flashlight of his? - in the top half.

"AWE, will take Jesse into a new area of the Oldest House, the Investigations Sector, where the Bureau closely examines Altered World Events," is the only morsel Remedy offers.

Control will also be getting a few free content updates this year. A photography mode which will let you pause the game on the fly and take pics throughout your tour of the paranormal is being added to the game in fall. Later, coming in December is end-game content called Expeditions which sees yer gal Jesse helping Security Chief Arish explore the mysterious Formation and its equally mysterious surroundings. Remedy describes this as one of the harder challenges in the game, which means you'll need some decent gear and abilities to survive it.

Control's first expansion, The Foundation, is slated for early 2020. This is a paid expansion that delves into the history of the Oldest House. This time Jesse is going underground at the request of the secretive Board, exploring what exactly lies beneath the Bureau. "Expect things to get weird," says the developer.

You can find the full roadmap on Remedy's blog.

Control launched for PC on August 27. Check out our review for the game.