Of the fourteen gaming mice that have swished across my desk this year, six of them have been made by Corsair. With the Glaive RGB Pro, that number rises to seven - which is, frankly, a ridiculous number of mice to release within the space of twelve months, and way more variations on a theme than is perhaps strictly necessary. Some have been great - see the Ironclaw RGB and Harpoon RGB Wireless. Others, not so much, such as the Nightsword RGB and M55 RGB Pro. Thankfully, the Glaive RGB Pro ends my 2019 Corsair odyssey on a relative high, as it's not only one of the comfiest gaming mice I've ever used, but its snap-on, interchangeable thumb grips also give it plenty of flexibility for different hand shapes. Here's wot I think.

In many ways, the Glaive RGB Pro looks and feels like a retooled version of Corsair's best gaming mouse-grade Ironclaw RGB. Aimed at the same MOBA and FPS crowd who favour long-term comfort and ultra-fast response times, the Glaive RGB Pro has the same 18,000 DPI Pixart PMW3391 sensor as its Ironclaw sibling, and it's also been designed for right-handed palm grippers like myself who like their mouse to fill the whole of their hand when moving it around your mouse mat. Heck, even its seven programmable buttons look like they've rolled off the same production line as the Ironclaw RGB, from its two, similarly-shaped chunkers sticking out the side to its identically textured scroll wheel.

The main difference between the two mice is that the Glaive RGB Pro comes with those aforementioned interchangeable thumb grips, which snap into place via magnets. There's a full, fin-like groove that cradles your thumb against its rubbery, textured base, as well as two flatter options that let your thumb rest against your mouse mat. Personally, I only ended up using two out of the three grips (the fin and the completely flush option), as the more pronounced flat grip forced me to move my hand back and adopt a fingertip-style grip in order to maintain a firm hold on it. 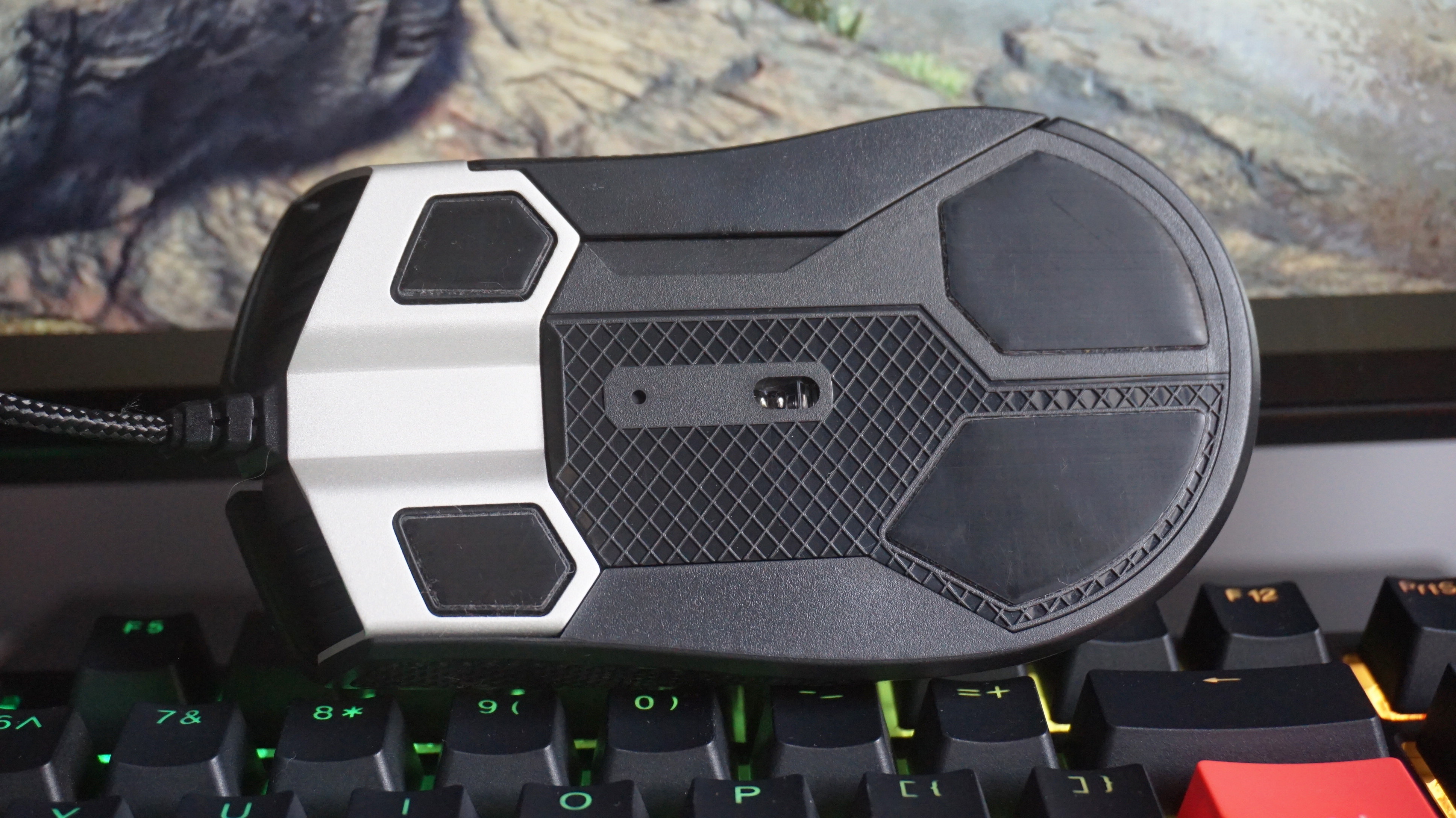 For me, this didn't quite gel with the overall shape of the Glaive RGB Pro, and it ended up making the whole thing feel too big and heavy to move around quickly while playing games. With the fin and flush grips, on the other hand, I was able to keep that hand-hogging palm grip and swish my mouse about like normal. This might be because I have tiny girl hands, of course, but I appreciate having the option to switch back and forth between different grips as needed - especially if, further down the line, one ends up getting more worn out than the other.

On the whole, though, the Glaive RGB Pro felt very comfy to use on a daily basis, and it made searching for endless Black Friday deals all day every day last week that bit more pleasant. Is it more comfortable than the Ironclaw RGB, though? Probably not. Indeed, if you put a blindfold on me and ask me to identify which mouse was which based on touch alone, I'm not sure I'd be able to do so - especially when the Glaive weighs just 10g more at 115g as opposed to 105g. 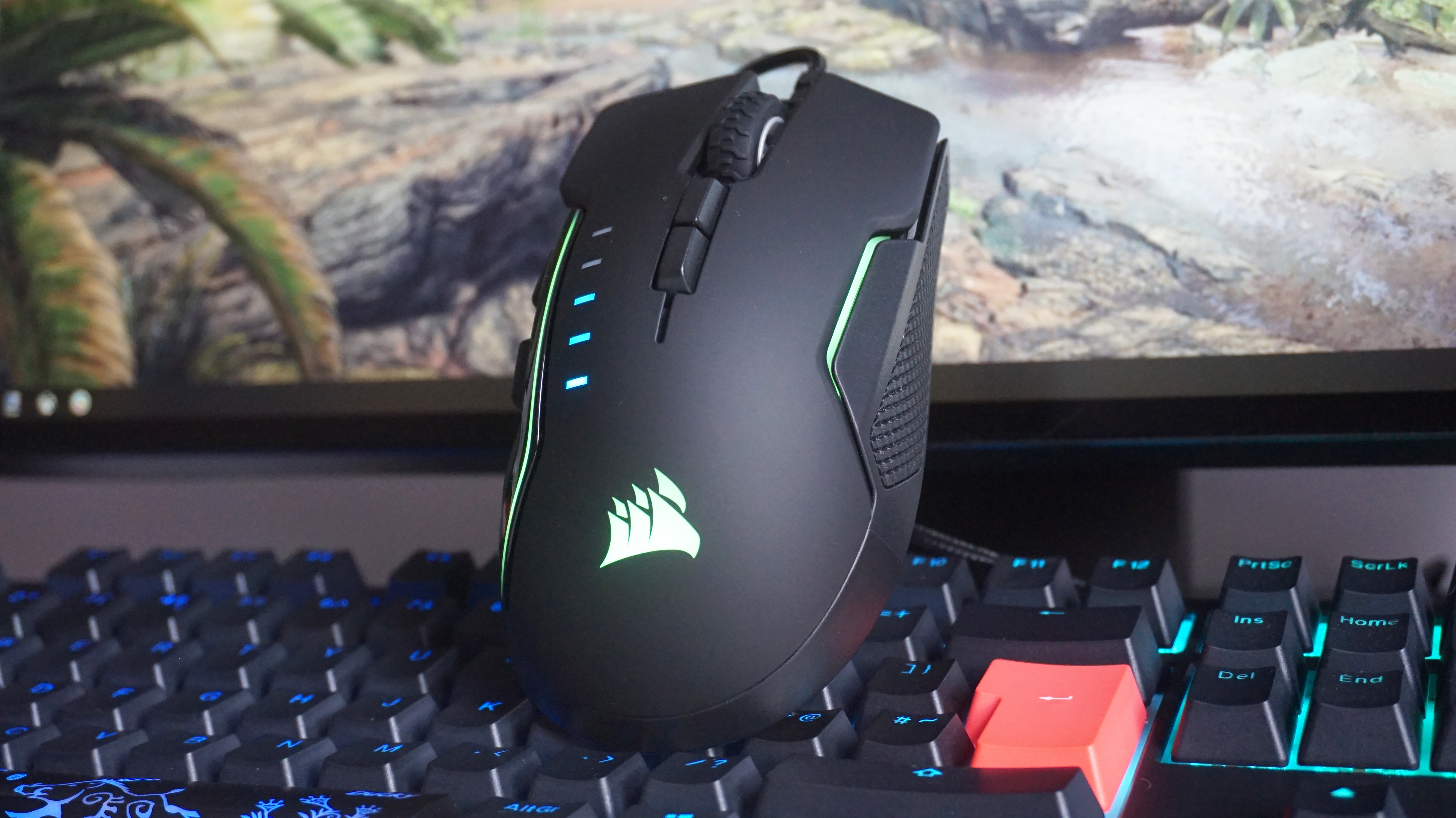 Instead, it largely comes down to which one you like the look of. The Glaive, for instance, has three RGB lighting zones as opposed to just the one you get on the Ironclaw, and it also has five little light-up bars on the top of the mouse that indicate which DPI profile you've currently got enabled. For reasons beyond my understanding, I'm really quite fond of these little bars, and cycling up and down feels like I'm putting my mouse into some kind of turbo-charged overdrive. It's a bit silly, but also highly practical, as it's probably one of the clearest profile indicators I've seen on any gaming mouse this year.

The Glaive RGB Pro's DPI speeds can be programmed exactly to your liking by downloading Corsair's free iCUE software, too, and can fall anywhere between a dead-slow 100 DPI and that aforementioned lightning fast 18,000 DPI. Want a DPI speed of 1373? You got it. There's none of this 'only increments of 50 or 100' malarkey like you get on other gaming mice. Whatever DPI speed you want is the DPI speed you shall have - although I should note this is true of all Corsair's 2019 mice, not just the Glaive.

iCUE also lets you remap each of its seven buttons to whatever you like (except left click, that is, which will always remain left click). This includes swapping other mouse functions around, as well as your own recordable macro commands, media controls, using them to launch certain applications, switch profile or enact all sorts of different keyboard commands. You can also turn one button into a so-called 'sniper' button, which changes your DPI speed to whatever value you like for as long as you hold it down - usually something slow so you can line up those all-important headshots and the like while playing competition games. 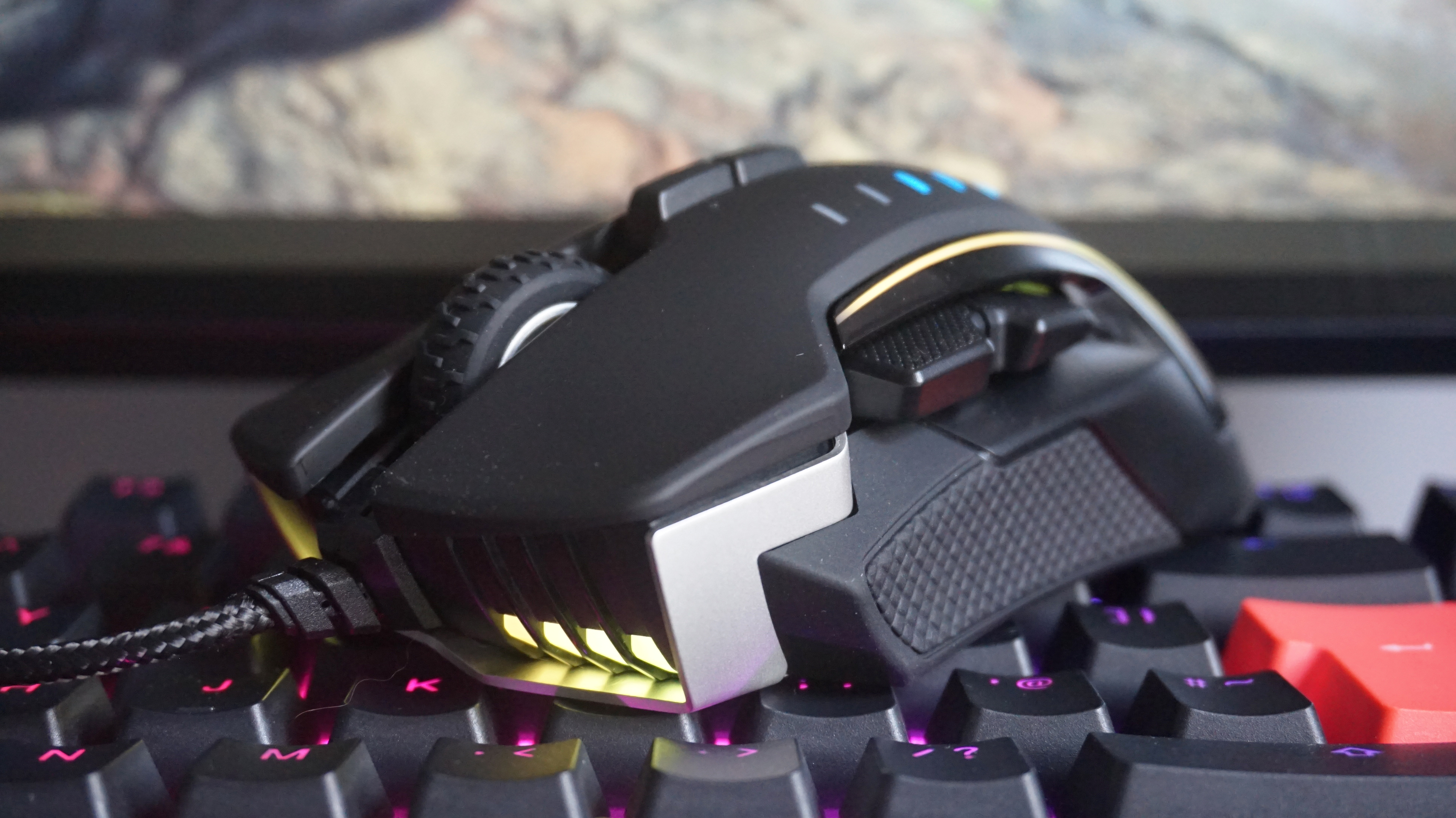 Personally, I'm always pleased to see this kind of functionality in a gaming mouse, but the position of the Glaive RGB Pro's two side buttons makes this kind of feature quite difficult to use with any degree of comfort. The farthest side button feels a touch too slippy to keep a firm grip on it, for example, while the nearest requires the kind of suppleness my aged thumb joints simply don't possess. This may be less of an issue for those with larger hands, but for me, the Glaive RGB Pro is probably the first mouse I've tested this year where its sniper feature is more of a hindrance than a help.

Still, for all my quibbles about the Glaive RGB Pro's button placement or its single-oddly shaped side grip, it really is a very pleasant mouse to use on a day to day basis. Indeed, I'd probably be perfectly happy to carry on using it in its flush side grip form if it weren't for the sheer cost of the thing. With current prices standing at £67 / $63, the Glaive RGB Pro feels just a bit too expensive for a mouse that's not completely perfect, no matter how comfy and luxurious it feels under the hand.. For that kind of money, I'd want each grip to feel as good as the other, and I'd also want to have full use of its various button functions.

It's especially galling when the equally comfy Ironclaw RGB can be had for considerably less - just £35 / $53 at time of writing, although that UK price is likely to go back up closer to £50 once the Black Friday / Cyber Monday deals are finally over. Still, even £50 is more preferable for what's virtually the same mouse underneath, and I can make better use of that sniper feature, too. I'll be sorry to lose the Glaive's DPI bars, but unless you're desperate for that interchangeable fin grip, I don't really see much reason to choose this over the Ironclaw. The Glaive RGB Pro may be miles better than the Corsair Nightsword RGB I tested the other month, but the Ironclaw RGB is still king when it comes to overall value for money.