We've all seen our fair share of amusing hardware names over the years, but Corsair's Nightsword RGB mouse is quite possibly the best one yet. I just love it, particularly because there's nothing remotely sword-like about it at all. There is, I'll admit, a reasonably fine point on the end of its two main clicker buttons, but the patterned, soft-touch chassis and grippy left-facing thumb wing make it look and feel distinctly beetle-like to my eyes, especially when you catch a glimpse of its glowing hexagon-encrusted eyes down the front. A Nightscarab, perhaps?

Still, regardless of whether you fall on the blade or beetle side of this frankly ridiculous fence, both metaphors fall apart when you turn the Nightsword over and flip open its black, plastic belly. For inside are six small recesses for six tiny weights, allowing you to beef up the weight of the Nightsword from 119g to a chunky 141g. Yep, this is definitely a gaming mouse, all right. But is it worthy of joining our best gaming mouse rankings? Here's wot I think.

Like the Steelseries Rival 600, Logitech G502 Hero and Corsair's own M65 RGB Elite before it, the Nightsword is yet another 'tunable' gaming mouse. It's quite a bit more expensive than much of its competition, with current prices sitting at £70 / $70, but that's probably because a) its DPI range goes all the way up from a deathly slow 100 DPI to a massive and much too fast 18,000 DPI, and b) its weights are a bit more flexible than what you'll find elsewhere. Probably.

You see, the Nightsword RGB comes with two different sets. Three solid weights that weigh 4g apiece, and three slightly lighter hollowed out ones that weigh 2g apiece. This gives you up to 120 different weight and balance combinations to choose from, according to Corsair, which isn't as high as what you get with the Steelseries all told, whose eight 4g weights give you 256 different configurations, but I do like that the Nightsword gives you a mix of weights to choose from rather than lumber you with loads of the same one. 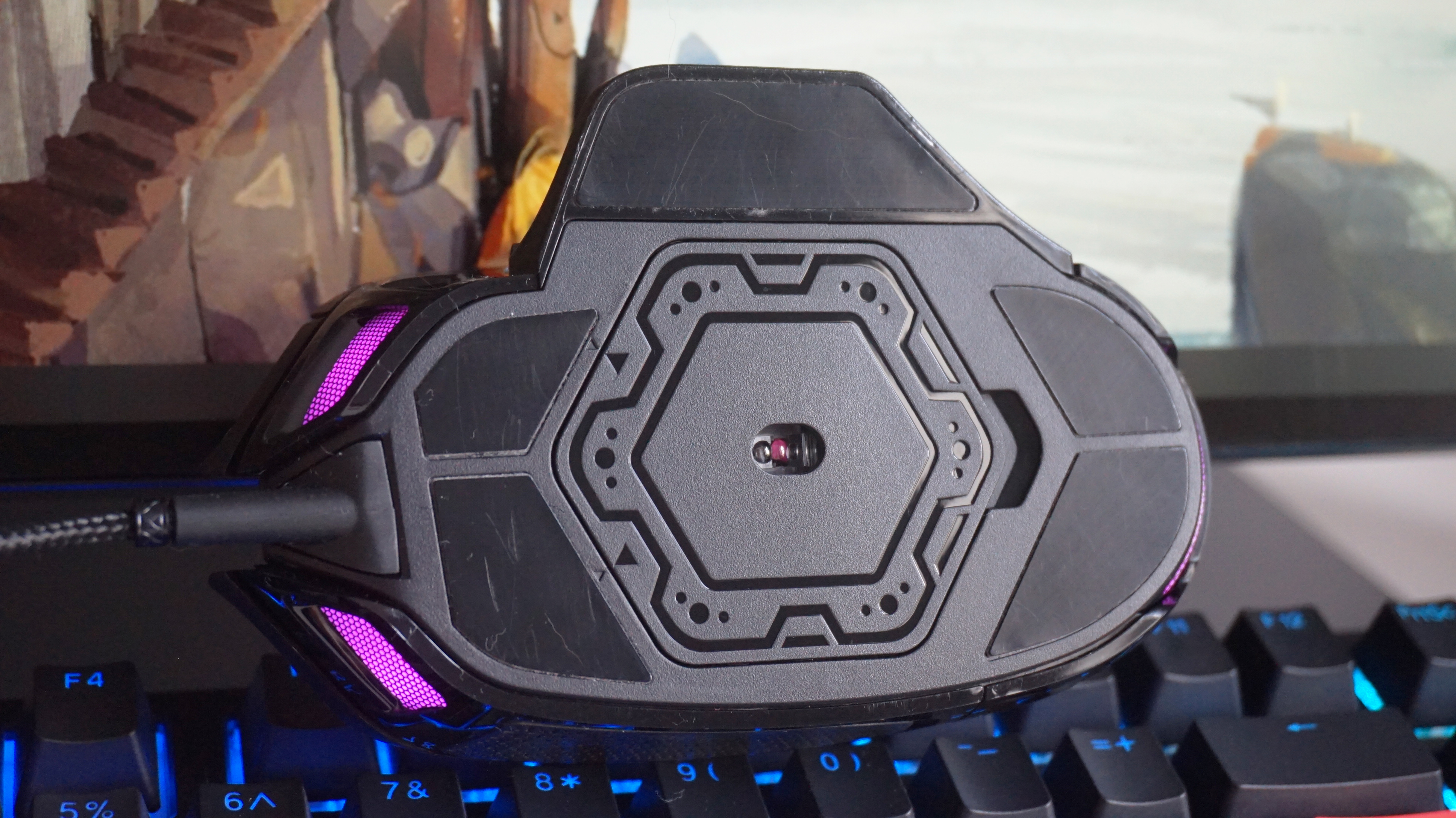 Personally, I felt little need to start making the Nightsword heavier than its default weight of 119g, as that was already quite enough for my spindly little fingers, and even adding the lighter 2g weights made it more of a chore to drag across my mouse mat. I'm more of a lightweight mouse fan myself, and I much prefer having a weightless mouse as possible.

However, thanks to its large, contoured shape, the Nightsword was still stupidly comfortable to use on a day-to-day basis, and it's the perfect fit for my lazy, all-encompassing palm grip. My thumb also felt very snug resting on its grippy resting wing, but I did find my hand was just a bit too small to reach its dedicated sniper button with any degree of comfort.

In much the same way as other gaming mice, pressing this slows the Nightsword's DPI or sensitivity speed down to a crawl for as long as it's held in (all the way down to a mere 100 DPI, if you so wish), making it easier to line up headshots and the like or pan slowly across MOBA arenas, for example. Let go, and your DPI speed instantly springs back to normal, making buttons like this useful for when you need a bit more fine motor control under pressure. On the Nightsword, however, my thumb only just grazed the very edge of its sniper button, and I really had to lunge forward, or bunch my hand up the back of the mouse, in order to reach it. 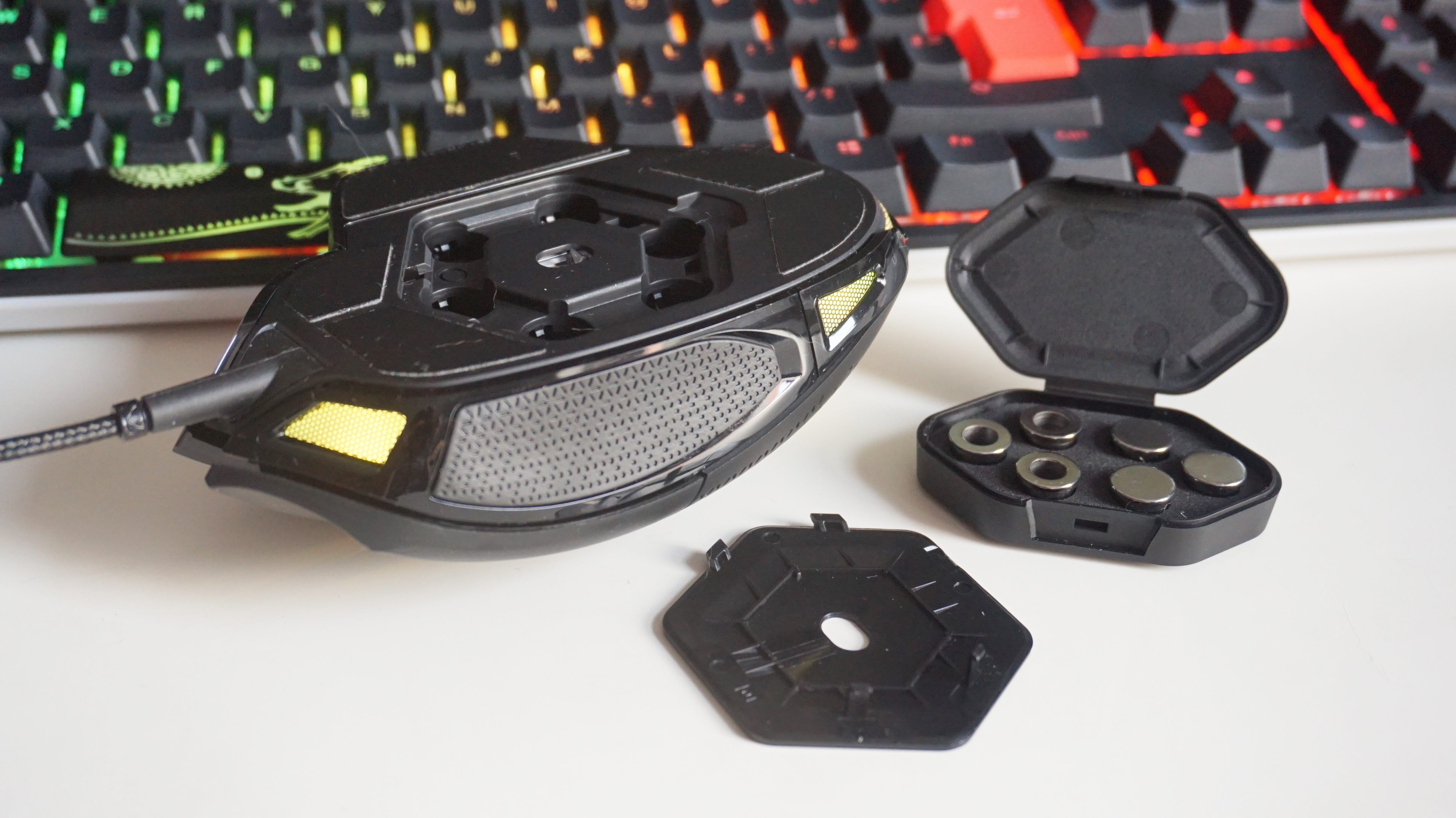 I also repeatedly mistook the hard edge of the thumb rest for its two additional side buttons, which sit just above it. These feel very much the same as the edge of said thumb rest when your attention is diverted elsewhere, and their lack of any obvious divide also made it difficult to tell which of them I was actually pressing, too.

There are two more side buttons to the left of the left clicker, too, giving it a total of ten buttons overall. However, these are arguably just as awkwardly located as the others. The farthest one is pretty easy to hit, as all I needed to do was slide my index finger over to the left. The one behind, however, required me to arch my index finger back, which just wasn't particularly comfortable or easy to do. Younger folk with nimbler joints than I may not have this problem, of course, but those with feebler fingers like myself may experience some difficulty here.

As such I wouldn't recommend assigning massively important functions to these hard-to-hit buttons, although at least the Nightsword's copious number of buttons and numerous programmable controls give you plenty of customisation potential in Corsair's free iCUE software. As well as the usual recordable macro options, you can also assign text and media controls to nine of its ten buttons (left click will always remain left click), along with all manner of keyboard buttons, application launchers and, of course, other mouse functions. Once I'd reconfigured the sniper button to one of the two side buttons, for example, I got on with it much better.

Still, it's not exactly ideal when a lot of those buttons are either difficult to press or tricky to feel out, which makes the £70 / $70 price of the Nightsword feel all the more crippling. Personally, I much preferred the slightly cheaper Steelseries Rival 600, although even that still costs £60 / $65. Instead, those after the best value 'tunable' mouse should probably turn their attention to the Logitech G502 Hero. Yes, that also looks like a mouse turned scarab beetle, but it's a lot cheaper for those buying in the US, where prices currently sitting at just $48. In the UK, sadly, it's an identical £60 to the Rival 600, but for me it's a damn sight more comfortable to use than its Steelseries competition, and comes with loads more programmable buttons.