How much would you normally spend on a mouse? £10? $20? Maybe even £30 if I'd been particularly stung (or should that be bitten?) by a dodgy mouse in the past, but it would have to be a really good one - possibly even the bestest best out there - for me to consider spending more. Indeed, if you thought shelling out £70 for the Asus ROG Gladius II was a bit steep, then the £80 / $75 Steelseries Rival 600 has an even greater mountain to climb before it starts looking even vaguely palatable.

Fortunately, there is method to its slightly mad pricing. If you've ever felt like your mouse was too heavy (like the monstrous Corsair Scimitar Pro), too light (a la Steelseries' own Rival 110), or just not quite right for your liking, the Steelseries Rival 600 has a remedy - and that's eight little 4g weights you can slot into each side of the mouse, giving you as many as 256 different weight and balance configurations.

The weights come in a handy little rubber case for easy transportation, and attaching them is as easy as pulling off the Rival 600's magnetic sides and pressing them into the little moulds beneath. No screwdriver required. 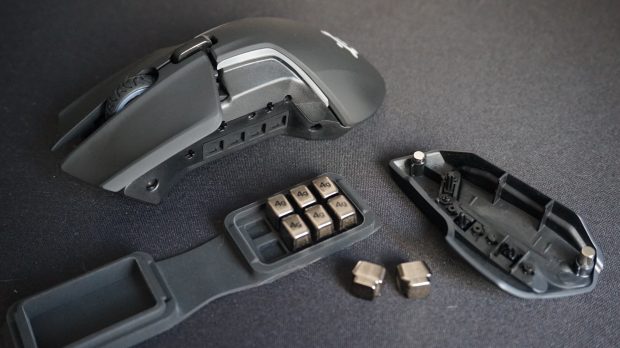 Personally, I generally prefer lighter mice because of my tiny girl hands, and I actually got on perfectly well with the Rival 600 in its default, weight-less state of 96g. In this sense, the Rival 600 feels slightly wasted on someone like me, as I just don't feel the need to make use of its main feature.

Indeed, adding half of its weights (two either side) certainly gave it a bit more heft, but at 112g, this was just on the verge of it feeling too heavy for my tastes, and using all of them together to take it up to 128g only made it feel worse. It's not like it suddenly became a lead weight in my hand or anything, but I could see my hand getting quite tired if I kept using it like that for prolonged periods of time. Still, at least the Rival 600 gives you that flexibility and freedom to get your mouse weight just right, as well as the chance to make it more top-heavy, one-sided or put all the extra weight at the rear to suit your weirdly specific mouse requirements.

Its dual optical sensors also felt lovely and responsive during day-to-day use, and its silicon compound side grips felt nice and comfy under my fingers. I also appreciated it had a removable USB cable, but you'll have to buy a braided one if that sort of thing's your bag as it only comes with a regular 2m rubber one in the box.

Likewise, the ability to change its lift-off distance (how far you can move your mouse off your mouse mat before it loses track of where it is) meant it was able to keep pace with any frantic or sudden movements. This is where that second, dedicated optical depth sensor comes in, lending the Rival 600 a higher degree of accuracy than any other mouse I've used so far. It does mean you'll need to either reconnect the mouse or hold down its central DPI button every time you use it on a different surface (it only calibrates itself for one surface at a time), but overall it's a minor irritation that only lasts a couple of seconds while it sorts itself out and then you're off again and everything's dandy.

In addition to its many weights, the Rival 600 comes with four extra buttons - three on the side for your thumb and that aforementioned DPI button just below the scroll wheel. For me, three side buttons is just one too many for someone with hands as small as mine, as I was only ever able to comfortably reach two of them at any given time. In my usual slumped back grip, the farthest one was completely out of reach, but moving forward into a more claw-like grip meant I could no longer reach the nearest one without dislocating my thumb.

Indeed, it would appear Steelseries were only banking on people using two at a time, as the farthest is actually disabled by default when you plug it in. You can always assign it a function using Steelseries Engine software, of course, or indeed deactivate a different side button if you're a life-long claw gripper, but I think you'd be hard-pushed to use all three unless you're double-jointed or have the supple, elastic fingers of a small child. 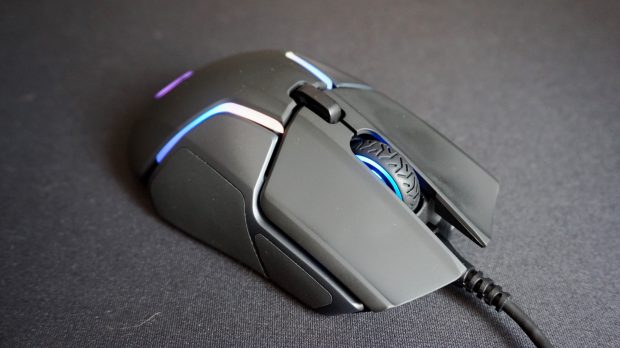 The two nearest side buttons, then, operate as forward and back buttons for when you're browsing the web, but you can change them to almost anything you like by opening up Engine. This includes keyboard buttons, macros, media keys and OS shortcuts, or you can even use them to launch Windows applications or other Engine apps, such as an audio visualizer, Discord, its PrismSync RGB software, or specific game apps for CS:GO, Dota 2 and Minecraft.

The DPI button, meanwhile, lets you cycle between two different sensitivity settings spanning from a crawling 100 DPI right up to a blink and you'll literally lose your cursor for all time 12000 DPI. No one in their right mind would ever need or want to use a mouse at that speed, and most will probably be happy with its default setup of 800 and 1600 DPI options, but at least you can't accuse it of not having enough range. 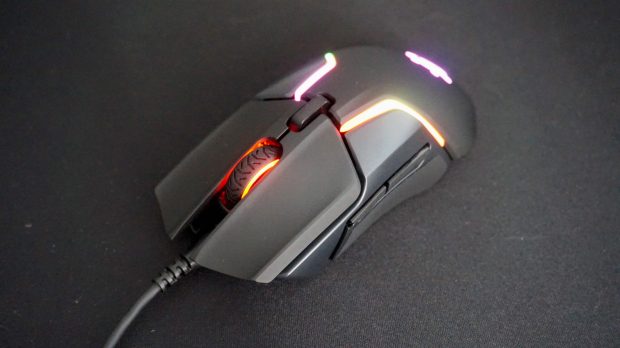 You can also use Engine to customise the Rival 600's eight RGB zones if you so wish, turning it into a Frankenstein's monster of LED madness (as seen above, sort of), or just settle for one of its standard steady, breathing or reactive key colour profiles if you'd rather keep things simple.

There's no denying the Steelseries Rival 600 is a nice bit of kit. Price aside, it certainly takes the fear out of buying a mouse that might be too light or too heavy once you get it out the box and start using it, and its slim, streamlined shape and smooth finish really does feel very nice under your palm. I'm still not sure I'm completely okay with paying £80 for a mouse, even one as lovely as the Rival 600, but if you're the type of person who'd rather pay extra for a bit more peace of mind, then the Rival 600 is a fine choice.