AMD showed off their first three Big Navi GPUs earlier this evening, showing us how their brand-new RDNA 2 architecture will take their next-gen graphics card family to new heights in 4K gaming - and a big part of that is down to one of AMD's intriguing new features: Smart Access Memory.

You'll need one of AMD's new Ryzen 5000 CPUs to take advantage of it, but when you combine them both together, AMD claim you'll be able to squeeze up to 13% more performance out of your PC as a result, allowing you to get even more out of your system than you would with rival hardware. At first glance, it certainly makes a compelling case to go all-in on AMD hardware for your next PC upgrade, and it might just make those higher-than-expected Ryzen 5000 prices worth the extra bump over Intel's 10th Gen Comet Lake CPUs. Here's how it works.

Why is this important? Previously, CPUs have only been able to access a tiny fraction of a graphics card's memory banks - just 256MB, to be precise. At the moment, game developers use that tiny 256MB of memory to enable CPUs to occasionally handle things like buffers, polygon meshes, and texture and geometry data. In the distant past of 17 years ago, this wasn't a huge problem given that GPU memory wasn't much bigger than that in the first place. Now, though, it's a different story, as all three of AMD's new Big Navi GPUs have a whopping 16GB of GDDR6 memory apiece - and with Smart Access Memory, a Ryzen 5000 CPU will be able to access the whole lot of it.

Naturally, being stuck with just 256MB doesn't give developers a lot of space to play with, and it means the CPU ends up making lots of calls to your graphics card's memory banks, which increases your PC's overall performance overhead and slows down your gaming speeds as a result. By allowing a CPU to have full access to that GPU memory, that performance overhead is dramatically reduced, allowing everything to speed up in order to increase those frame rates.

At the moment, AMD have seen performance gains of between 5-11% in titles they've tested internally - and, as we saw during AMD's Big Navi event, up to 13% when you combine it with the RX 6000's one-click overclocking feature called Rage Mode. That might not sound like a whole lot in practice, but AMD believe that once game developers are able to start testing it for themselves, we'll see even bigger gains start to emerge over time. 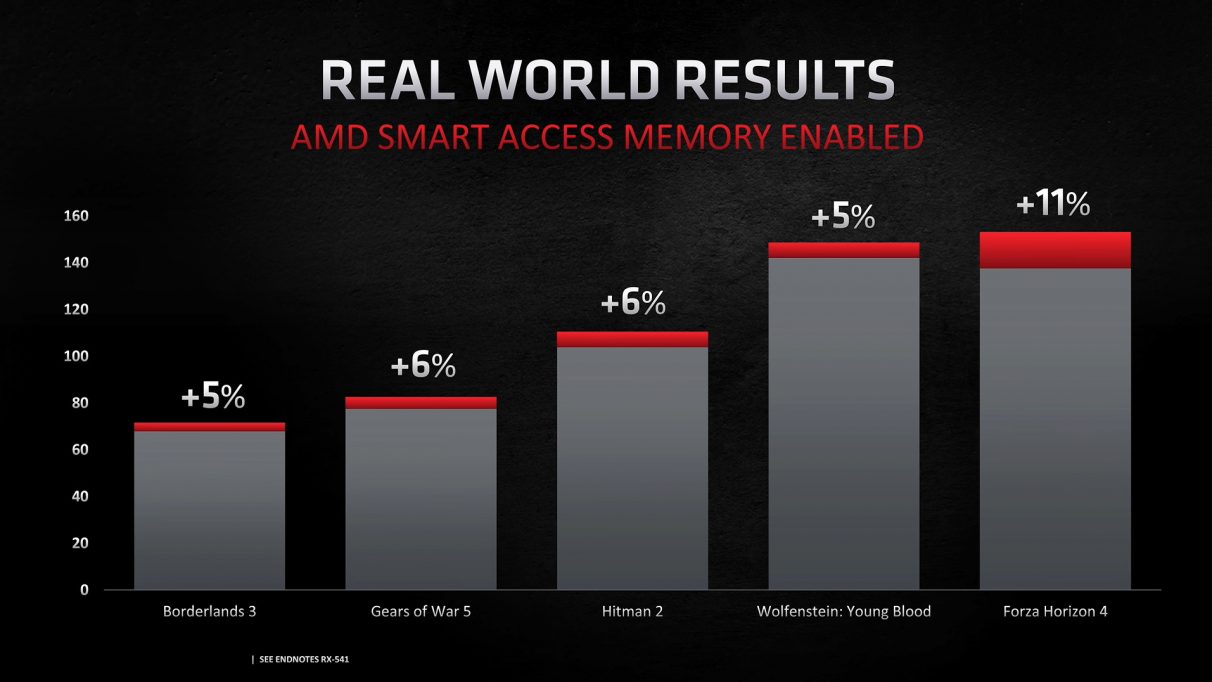 Even better, AMD say that Smart Access Memory will be available at launch when the RX 6000 GPUs come out on November 18th, and it run automatically in the background if you've got a Ryzen 5000 CPU, RX 6000 GPU and an X570 motherboard inside your system, so you shouldn't have to do anything in order to get those extra performance lifts. Alas, they didn't mention whether it will also be coming to B550 motherboards as well, but I'll update this article with more information as soon as I have it.

Of course, I'll be putting all of this to the test once review samples are available, but on paper, it certainly sounds like a compelling combination. It's exactly the kind of thing you want to see from having an all-AMD system, and it's something that AMD's Ryzen 3000 and RX 5000 launches last year were sorely lacking in my books. Yes, the big sell back then was that everything finally supported the super-fast PCIe 4.0 standard, but even now that hasn't really brought any benefits to playing games. It's been great for storage devices, but less so for increasing those all-important frame rates. This time, however, the advantages for gaming are much clearer and more tangible, and I'll be very keen to see how their combined performance compares to Intel's 10th Gen Comet Lake CPUs.

Intel's 10th Gen Comet Lake chips brought huge performance gains to gaming when I tested them earlier in the year (albeit at the cost of much higher power consumption), and AMD's Ryzen 5000 CPUs certainly have big boots to fill as a result. Naturally, there's every possibility that their Smart Access Memory feature will simply narrow that gap rather than offer substantial more performance over their respective Intel rivals to start off with, but I will be digging into this exact question as soon as I'm able.

Either way, I'm excited to see how it's all going to shake out, as it looks as though AMD are finally putting some much-needed pressure on their Nvidia and Intel competition. All will be revealed on November 18th when the first Big Navi RX 6000 GPUs launch worldwide.