If you click on a link and make a purchase we may receive a small commission. Read our editorial policy.
Developer: Radical Fish Games
Publisher: Deck13

Satirical website Hard Drive once ran a story which poked fun at the long, drawn-out nature of most RPGs. In a hard-hitting investigative report, one player was commended for finally “getting to the good shit” at the 117-hour mark of a fictional game, while his roommate scoffed at him for only making it mid-way through the game. Like most RPGs, CrossCode is an immense and time-intensive experience. Learning all the facets of its world — from the combat system to trading with merchants — does take a substantial amount of time, but it also makes every minute of this long stretch of time matter. This is done by framing its story as a “game-within-a-game”, lightly knocking on the fourth wall rather than blustering through it, showing familiarity with the genre, while subverting it at the same time. 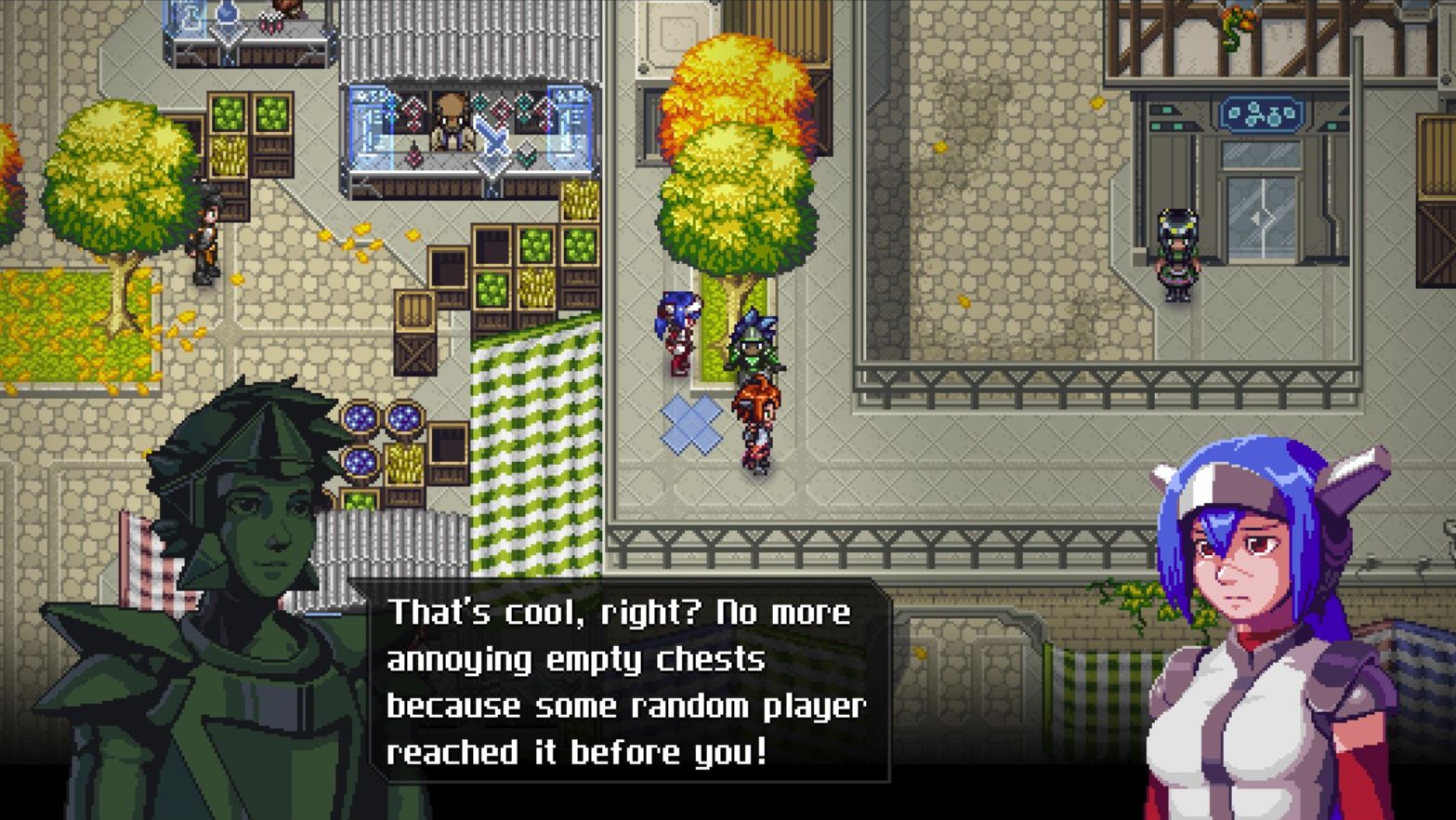 What’s CrossCode then? At its core, it’s a game that’s reminiscent of and heavily influenced by JRPGs of old. You play as Lea, an avatar within an in-universe MMORPG called CrossWorlds. But instead of a virtual world, the adventuring takes place elsewhere in a separate, physical planet, which means that both CrossCode’s videogame universe and the real world co-exist in the same realm. The inevitable eventually occurs, of course, in which both worlds collide through some coincidence.

But before that happens, you’ll spend long hours going through levels, performing the perfunctory motions of being in an MMORPG without actually being in one. Meanwhile, Lea, who’s aware of her avatar status within this so-called physical videogame, has not only lost the memories of her previous playthrough, but also her ability to speak. At the beginning, her speech is only limited to saying “hi”. Yes, it can all be a bit disorienting.

This recursive nature may give it the appearance of being the Xzibit meme of RPGs (“I heard you like RPGs, so I put an RPG in your RPG so you can RPG as you RPG”), but even that is a gross simplification of what CrossCode offers. On some level, the in-game MMORPG universe, CrossWorlds, is a caricature of its genre and its community. There’s a funny sequence where the characters realized how poorly scripted the quest givers in CrossWorlds are, just like in most MMOs; they would simply respond to Lea's very limited vocabulary as if she’s speaking in comprehensive sentences. One exchange goes like this:

NPC: What do you want from me?
Lea: Hi!
NPC: I see you’ve discovered my crimes. I have no choice but to silence you.

Another player, via their avatar, is gushing over an NPC with a supposedly rich backstory as expounded in the comics, even though she’s just a tutorial character animated to attack a punching bag repeatedly.

Better still are your party members, who will sometimes ask to slow down if you’re getting a tad overzealous in combat because the players behind their avatars are becoming worn out. Not only are these instances of meta-commentary downright charming, but such good natured ribbing offers CrossCode the means to gradually transcend the trappings of its RPG influences. 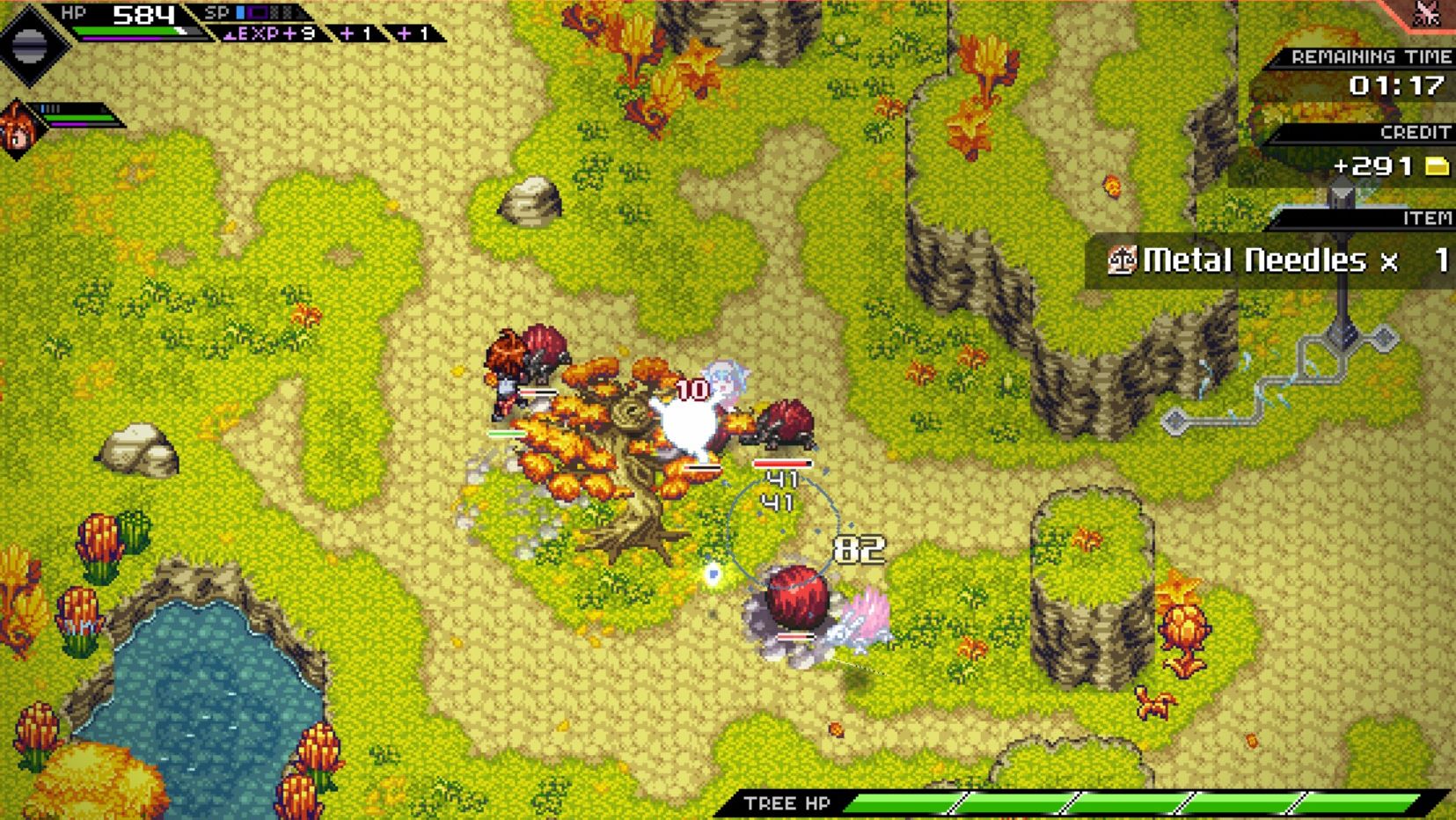 For one thing, combat is a lot more frenetic than the usual turn-based system I’ve come to expect from these games. These fights are still set in a familiar JRPG-esque environment, although your enemies are mostly passive and wouldn’t attack unless you lay a finger on them first. Relentless chain attacks, where your team slaughters critter after critter in red hot succession, is encouraged through a grading system, especially useful for chalking up bonus points and sweet, sweet loot.

It thus becomes a joyous mix of twitch gameplay and a bullet hell bonanza (the critters do fight back, but through repetitive attacks that you need to dodge and deflect), and you’ll need to make a concerted effort of shooting, attacking, dodging, guarding, sprinting, and generally performing superhuman-like stunts on your keyboard and mouse. 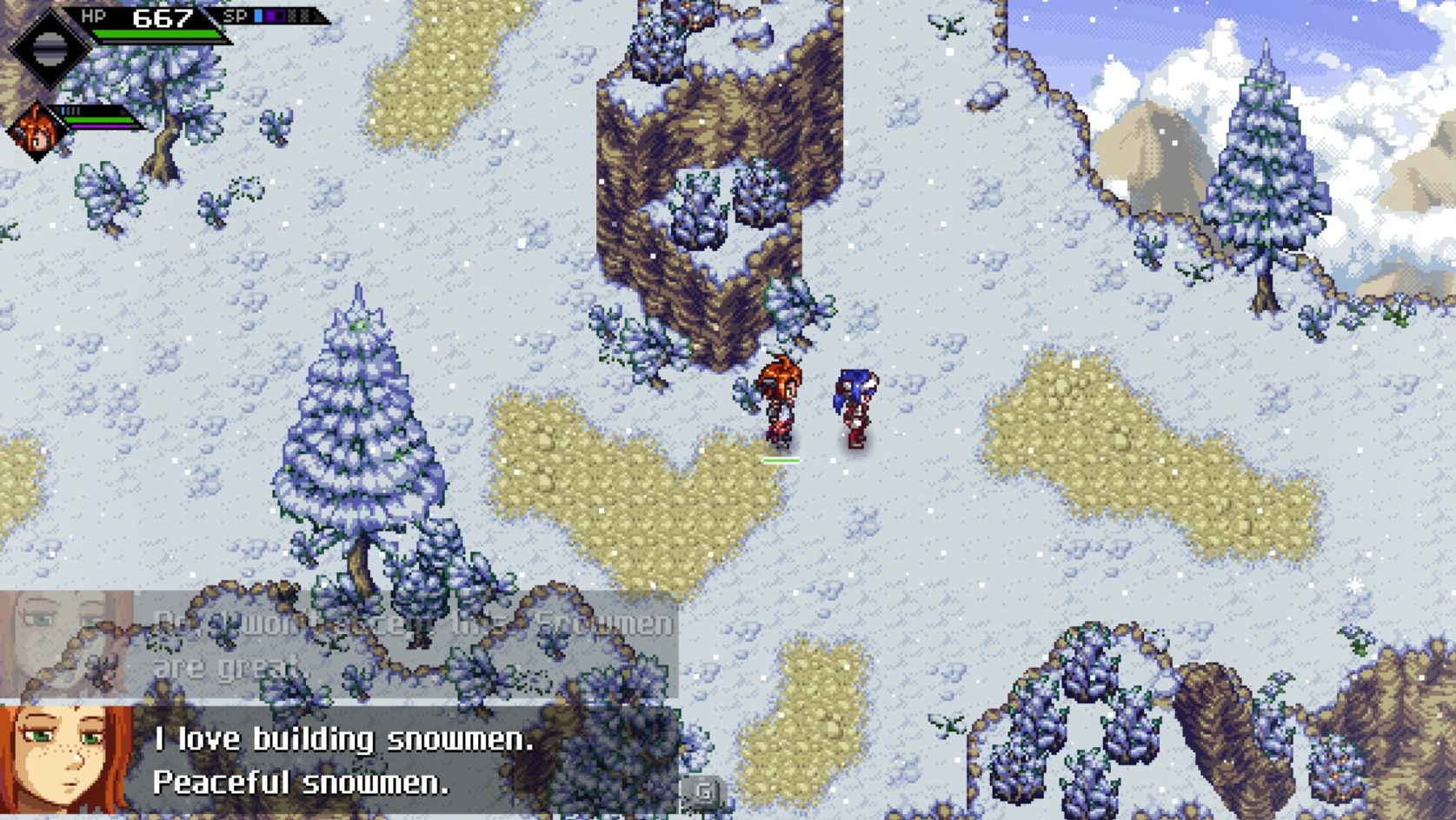 While far from original, it feels invigorating thanks to Lea’s bullet-spitting (or in the developer’s own words, ball-throwing) abilities. Shooting is more than just a haphazard affair. You may also need to devote a second or two to line up your shots amidst a flurry of attacks by your opponents, similar to the shooting mechanic in the ball-matching game Puzzle Bobble.

But that’s only one example of the wonderful duality of CrossCode — this play between subversion and familiarity — as it flirts with conventional moves in sometimes unorthodox settings, and vice versa. As with most RPG heroes, you’re afforded plenty of leeway to customise Lea’s abilities, even though you’re technically stuck with a single class called the Spheromancer. After all, this is what Lea’s previous player chose. The freedom lies in a sprawling skill tree, which is expansive without being intimidating. If you wish, you can do a quick symmetrical flip of your abilities and tap on a different branch of upgrades, which helps to assuage a sense of buyer’s remorse after investing a hefty amount of points into one branch. And if that’s not enough, there’s always reassigning your points back in town. 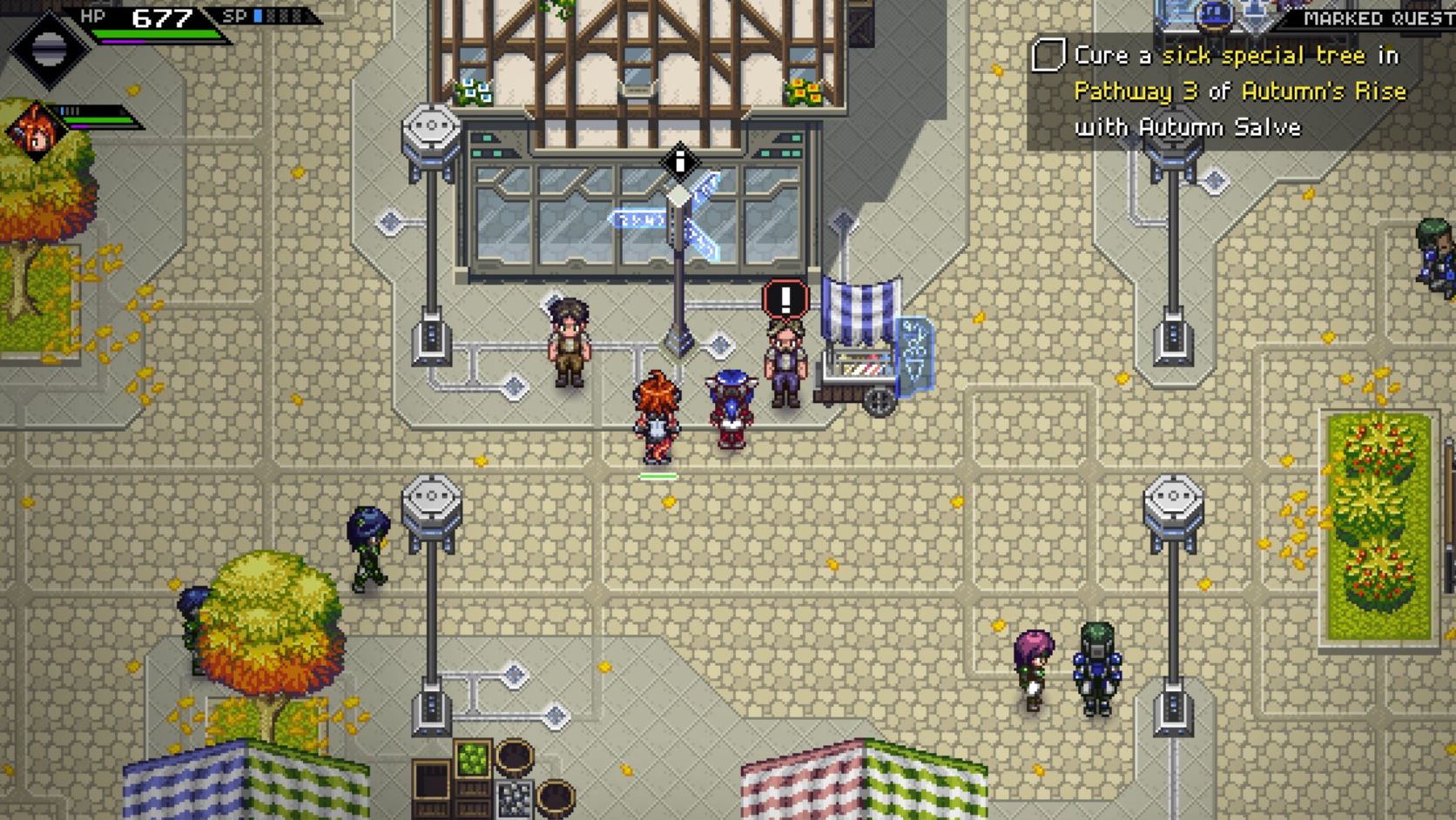 I mentioned at the beginning that it sticks to the RPG ethos of being time-consuming. But while it’s a game that demands a bit of time from you, it hardly feels overtly grindy. There are enough quests, puzzles and challenging enemy encounters to keep its players engaged, without them having to consciously farm for experience points.

The real point of CrossWorlds (the in-universe RPG) is, in the end, to adopt a role as a believably fun MMORPG, which offers CrossCode (the actual game I’m reviewing) the freedom to gradually suggest untested ideas, such as the ability to play around with its systems and its fourth wall-leaning narrative. That it still carries a similarity to most RPG structures, with its leveling system, side quests and boss fights at the end of its chapters, doesn’t quite take away from its charm.

Players (fake ones, that is) constantly stream in and out of areas, mimicking and perhaps, even making fun of the lifeless bustle of MMO games. NPCs dole out meaningless quests to the amusement of some characters, who’ll point out its farcicality. Enemies, who appear in the form of adorable creatures like bunnies and cows, respawn after you make brutally clean work of them. There are even enough esoteric jokes to delight those familiar with the genre. In short, CrossCode is a fun jaunt, developed with seasoned players of RPGs in mind — a truly great game you could devote 117 hours to.