If you click on a link and make a purchase we may receive a small commission. Read our editorial policy.
Developer: Airship Syndicate
Publisher: THQ Nordic

Howdy pardner! Git yerself a mighty glug of moonshine and meet me down at Dysentery Dan’s place, ‘cause we’ve got ourselves a roundup to… oh. Wait. Wrong game. It’s the horses that threw me off, you see. I always associate them with cowboys, now. But this is not the Cowboy Game. This is Darksiders Genesis.

Nevertheless, while this prequel spin-off to the hack-and-slash series is - as you might expect - a mix of isometric enemy-mulching and super-stylish character-focused action, it’s also more than a little equestrian. Indeed, in between funneling demons at your fists, it lets you clomp about on what RDR2’s Arthur Morgan would consider to be a very fine selection of boahs indeed.

The reason for all the hooves (other than the natural excuse provided by the fact you play as horsemen of the apocalypse), is the game’s scenery. The action often takes place across the sort of detailed, expansive vistas that would be impractical to traverse on foot, and so it allows you to have an occasional gallop through it all instead. These scenic clip-clops don’t seem strictly necessary from a level design point of view, but they lend an imposing sense of scale to the environments, making it all feel grand and excessive. 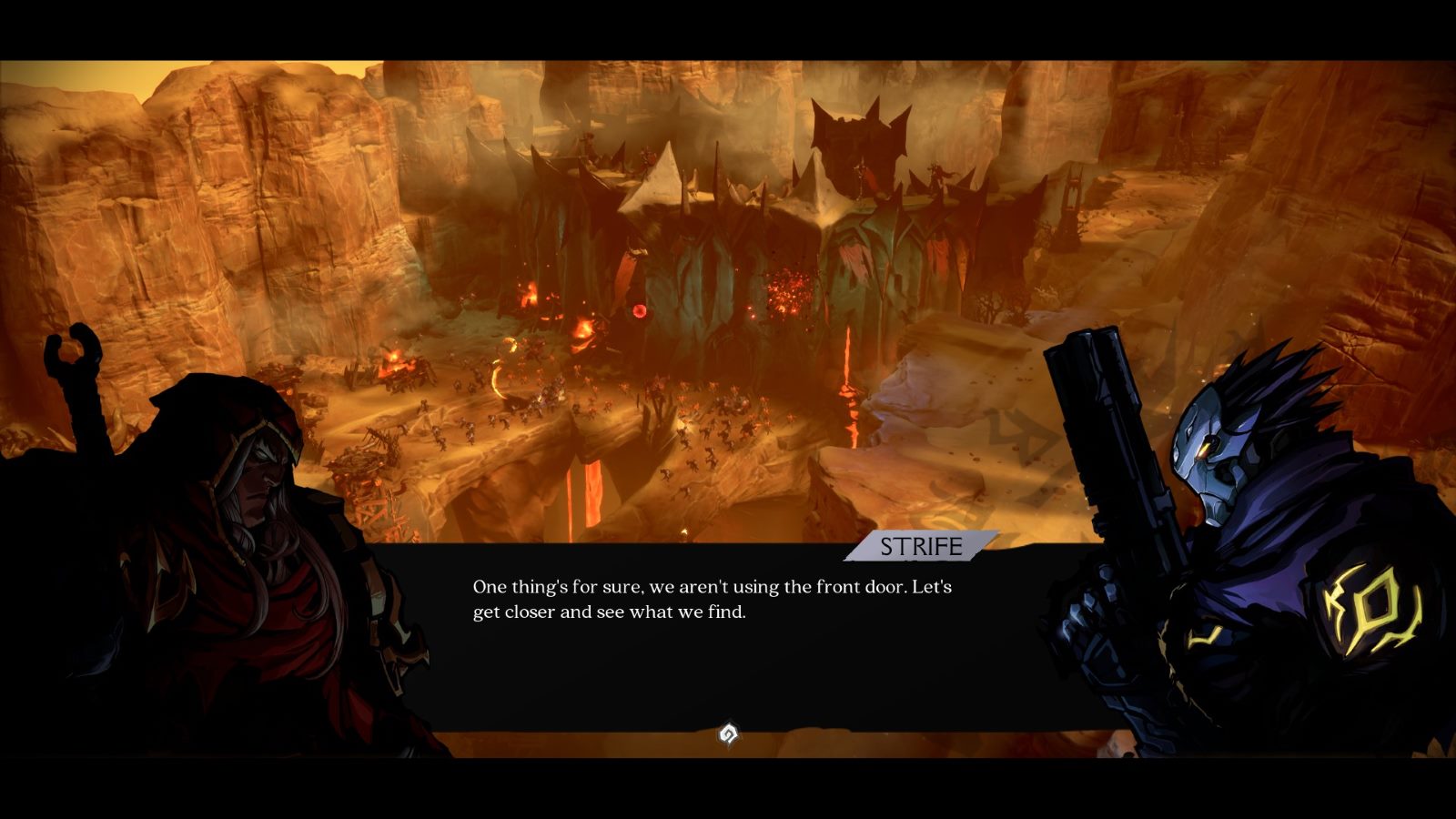 I wanted to talk about these jaunts first, because they sum up the central impression Genesis left me with: that Fun was Had in the making of this thing, and by people who were really into what they were doing. It’s a mid-budget game, sure, but for all its occasional frustrations, there is not a whiff of half-assery. It’s a full-arsed, thumb-numbing, limb-lopping murder party. And yes, it’s better than Darksiders III was. Much better.

Here’s the setup: On the orders of some spooky mountains called The Charred Council, The Horseman have been purging Eden of Nephilim, in a sort of celestial version of a badger cull. And they’re feeling a tad guilty about it all. Eden is a mess, so all the humans are shipped out, and the horsebois visit the council for a debrief. The shouty mountains think Lucifer is plotting with another demon named Samael to bring about humanity’s downfall, so they send War and Strife to sort them out via the time-honoured tactic of face-stabbing. 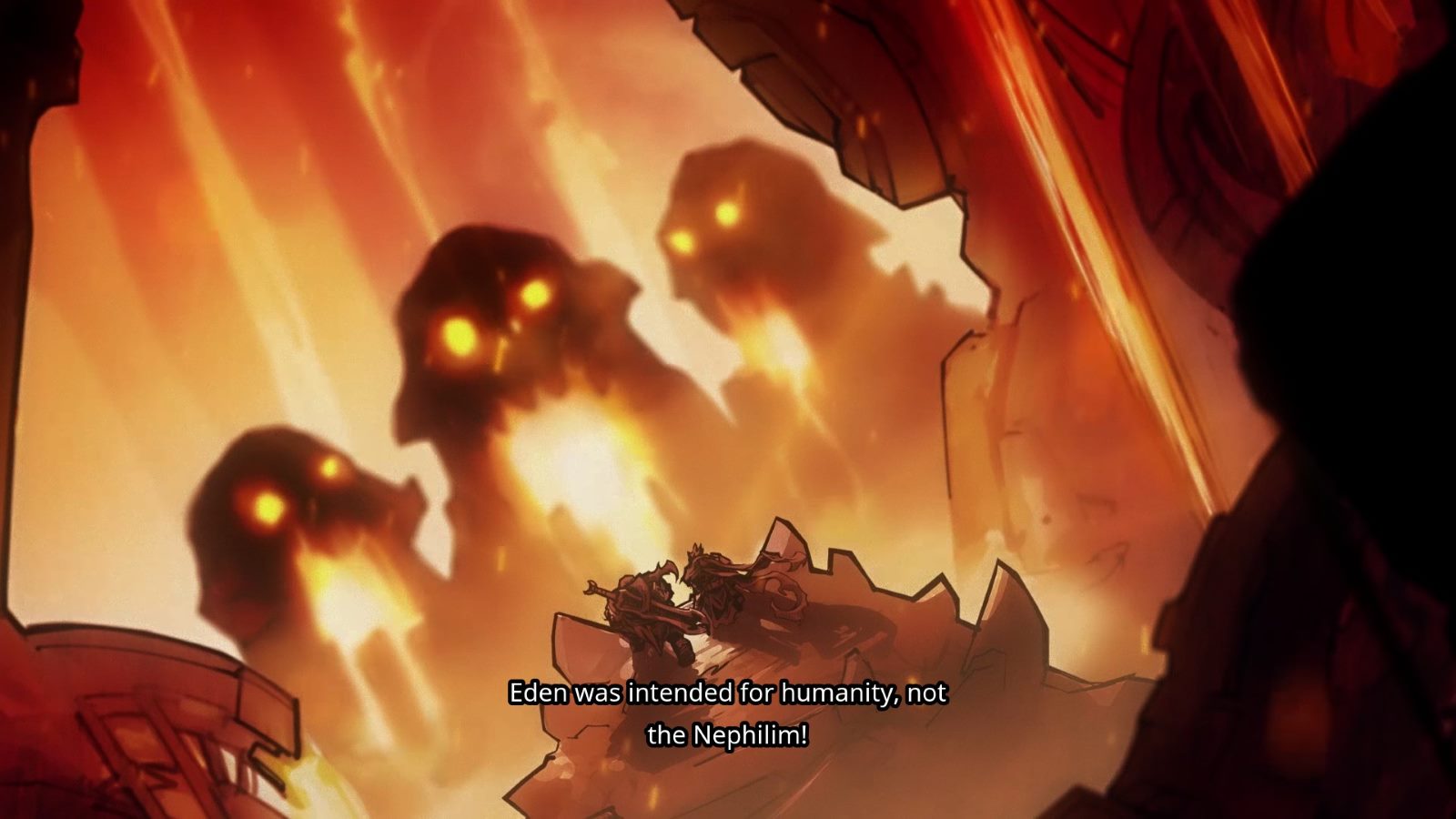 This sounds all gothic and elaborate and that, but in reality it’s closer in tone to a buddy cop movie with the occasional demonology reference thrown in. War is stoic and gruff. Strife is sarcastic and irreverent. Much patterbants ensue between them, and although there’s two eye-rollers for every giggle, they had grown on me by the time I finished.

The story too is more snappy and self-contained than you might expect, more a three-issue special than The Divine Comedy. That’s fine too, as it mainly serves as an excuse to ferry you between visually varied locations, and pit you against a rogue’s gallery of notable demons. It did not grip me by the grippables, but nor was it ever obtrusive.

The environmental detail, and especially the creature design, picks up the slack here. It’s all done with the same gloomy garishness and chunky action-figure look the series has always had. But here, the dull, decaying urban environs of Darksiders III have been swapped out for battle-scarred plains, luminous caverns, and imposing fortresses, populated by gatling-wielding spiky pigmun, and gargantuan necrotic scarab beetles. 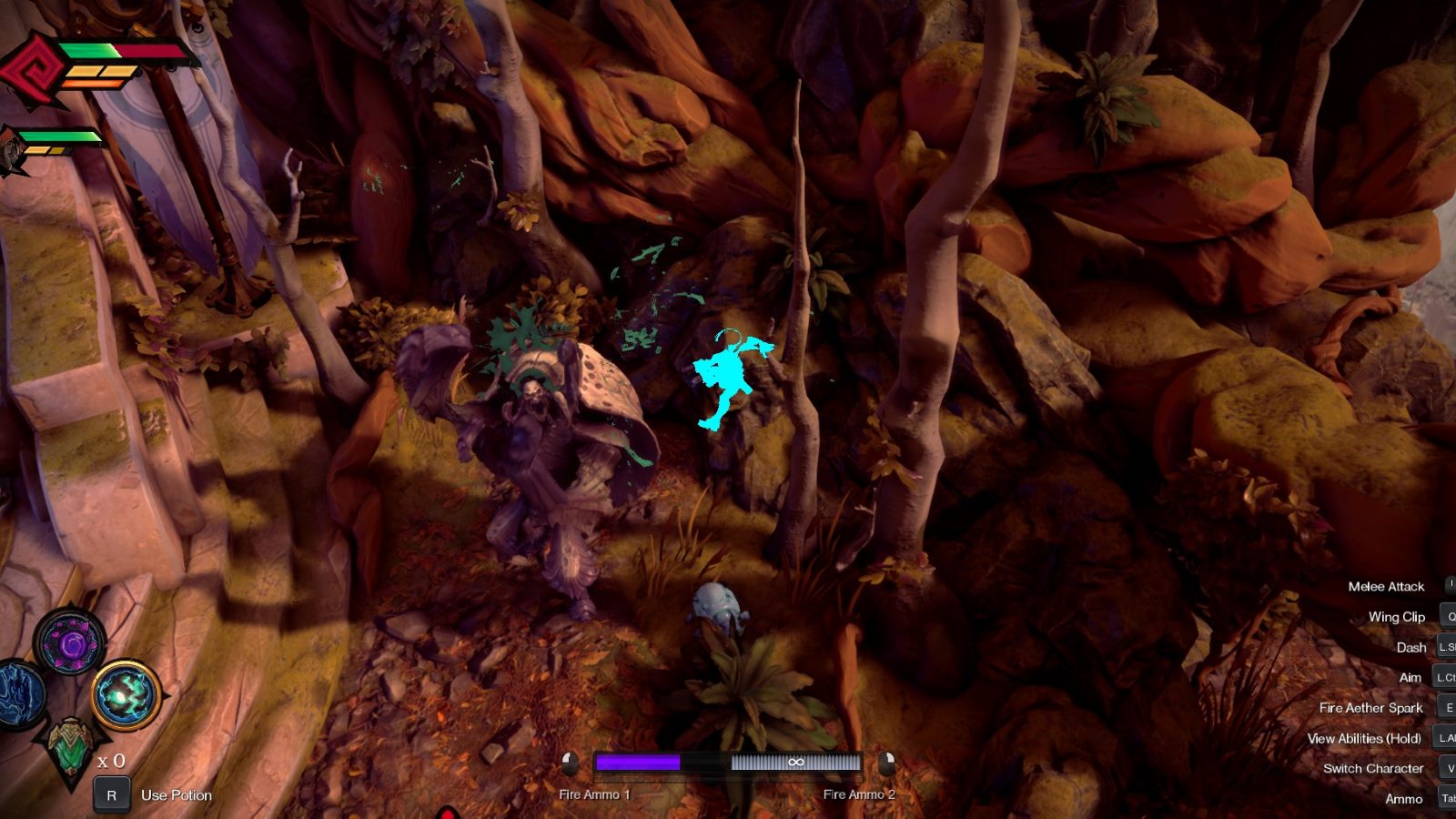 As you’d expect, Genesis is about 80% battering the piss out of said creatures. In a minute I’m going to get on to that, but first, I should mention how pleasantly surprised I was by the number of tomb-raider-y, god-of-war-ish environmental puzzles scattered among the fights. Thanks to the isometric camera they can lead to the odd unfair death, but they mean stages are so much more ambitious and dense than the flat arenas and corridors of say, Diablo 3 or Chaosbane. I genuinely hope future isometric loot’n’slashers take inspiration from their inclusion.

The puzzles come in two flavours, by the way. There’s the jumpy-floaty-grabby-ledgy environmental stuff, incorporating some satisfyingly fast shimmying. Then there’s the classic “oi, won’t this giant potato masher I just got for killing dark lord mash-hands work with the infernal spud gate we saw half hour ago?” affairs. Strife and War share some abilities, but they each have a few unique skills as well, so you’ll need to work together more often than not. And if you’re playing solo, of course, you can switch between Strife and War at any time.

So, let’s say your path is blocked by a huge mound of rubble. You’ve seen these mounds before, so you know you have to find a glowing bomb somewhere and yeet it at the rocks to make them explode. However, the only glowing bomb around is on an unreachable plinth on the far side of a gaping chasm. So Strife opens a portal (like the portals from Portal), then uses a gadget arm to grab the bomb, then throws it at the rubble. War locks-on to a flaming brazier, then the bomb, then send his spiky boomerang to meet them both, igniting the bomb and clearing the rubble. 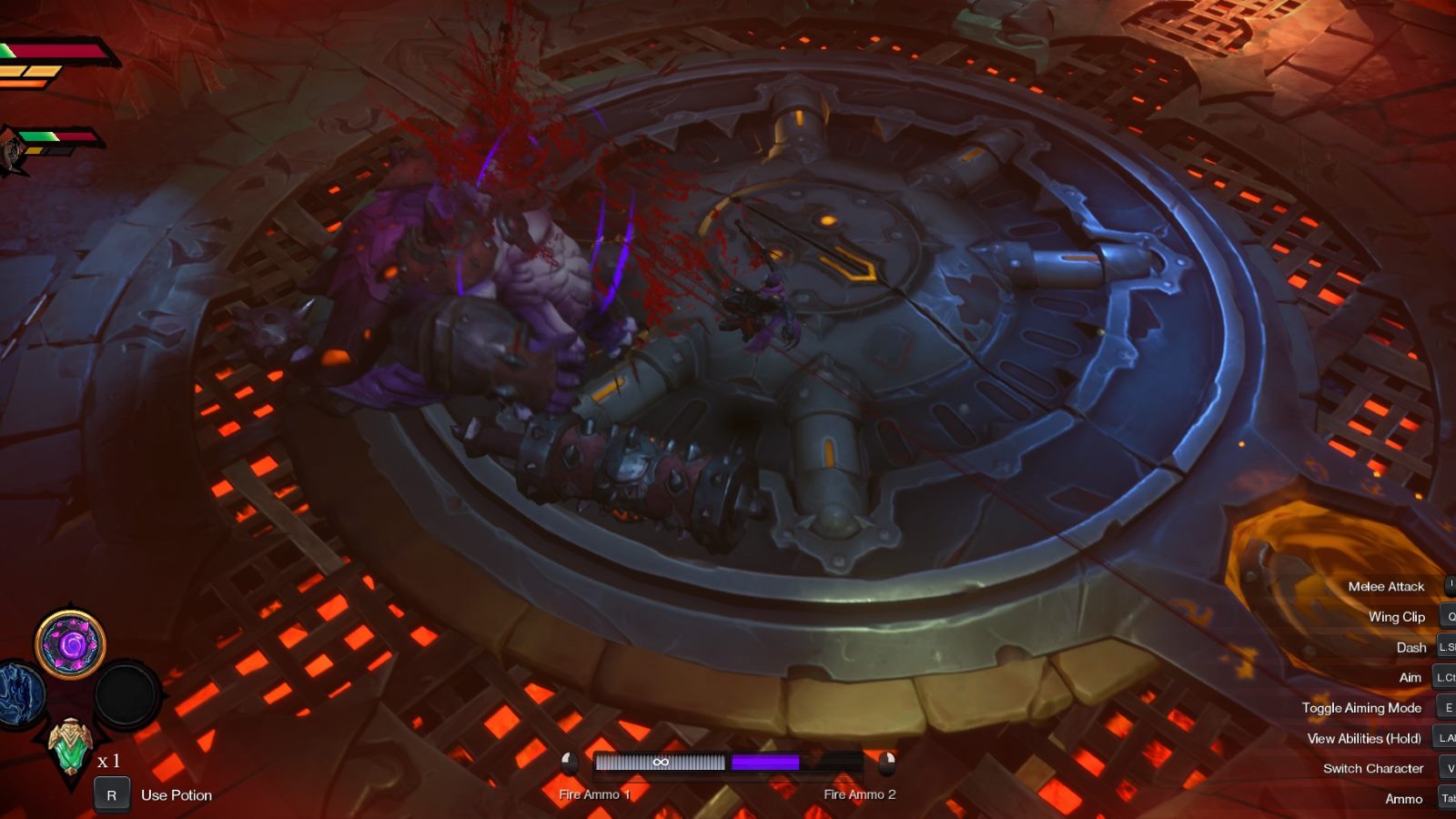 Actually navigating the levels can be frustratingly opaque, however. I’d venture I spent at least an hour of downtime running around looking for poorly telegraphed corridors, or searching for unique environmental features that might arbitrarily double up doors. You can find maps in each level, but they only show you your approximate location. Of course, there are optional goodies and secret areas aplenty - which is great. But seeking them out sometimes felt more like glitching than arriving at a planned solution, thanks to the frequently ropey delineations between traversable space and inaccessible scenery.

That scenery is, however, responsible for the sense of scale I mentioned earlier. There’s even a few set pieces, giving the stages that feature them a sense of environmental progression unbound from the percentage of enemies you’ve cleared. Things move! Sometimes they move at you angrily, and you have to move the other way! It means the sense of narrative action is moving, even when the plot isn’t. Basic stuff, I know, but it’s a treat in an isometric game, where you’re given so much more information about your surroundings by definition. 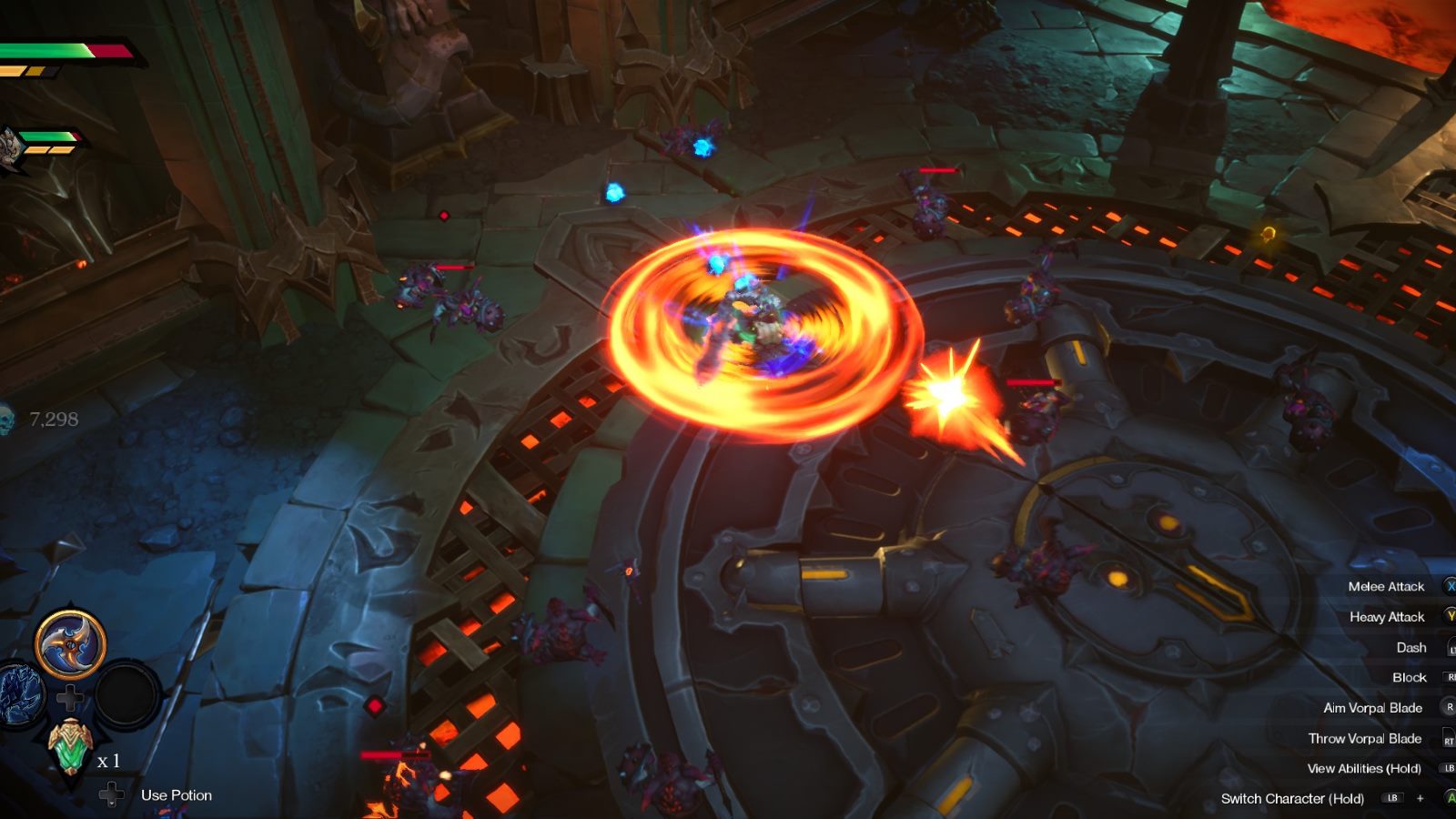 It also feels like a treat because, honestly, I would have had a pleasant enough time just mashing away at the combat for twelve hours. There’s so much of it! Strife is all flowing dashes and twin-stick-shooter double pistol action. War is a meaty tank. Slower, hurtier. Both have some light-heavy attack combo action going for them, some AOE attacks, a screen-clearing devil trigger apeshit mode, and kill-fill meters whose completion can buy yet more special attacks. War can find a vampiric health draining sword, or a spin-to-win lava… thing. Strife can find a beam weapon, or a gravity gun that shoots out mini black holes to slurp enemies up. There’s execution moves for low health enemies, and you can even chain them together in a rhythmic staccato of absolute merkage.

While the co-op (couch or online) option of taking control of one character each seems like the intended way to play, switching between characters while playing solo gives you a freedom that reminded me of Dante’s mid-combo style switching. It’s not as radical, of course, but what is? Difficulty also ramps up a fair bit during co-op, so you definitely need to remain present, alert and reactive, even while mulching through stages with a mate. 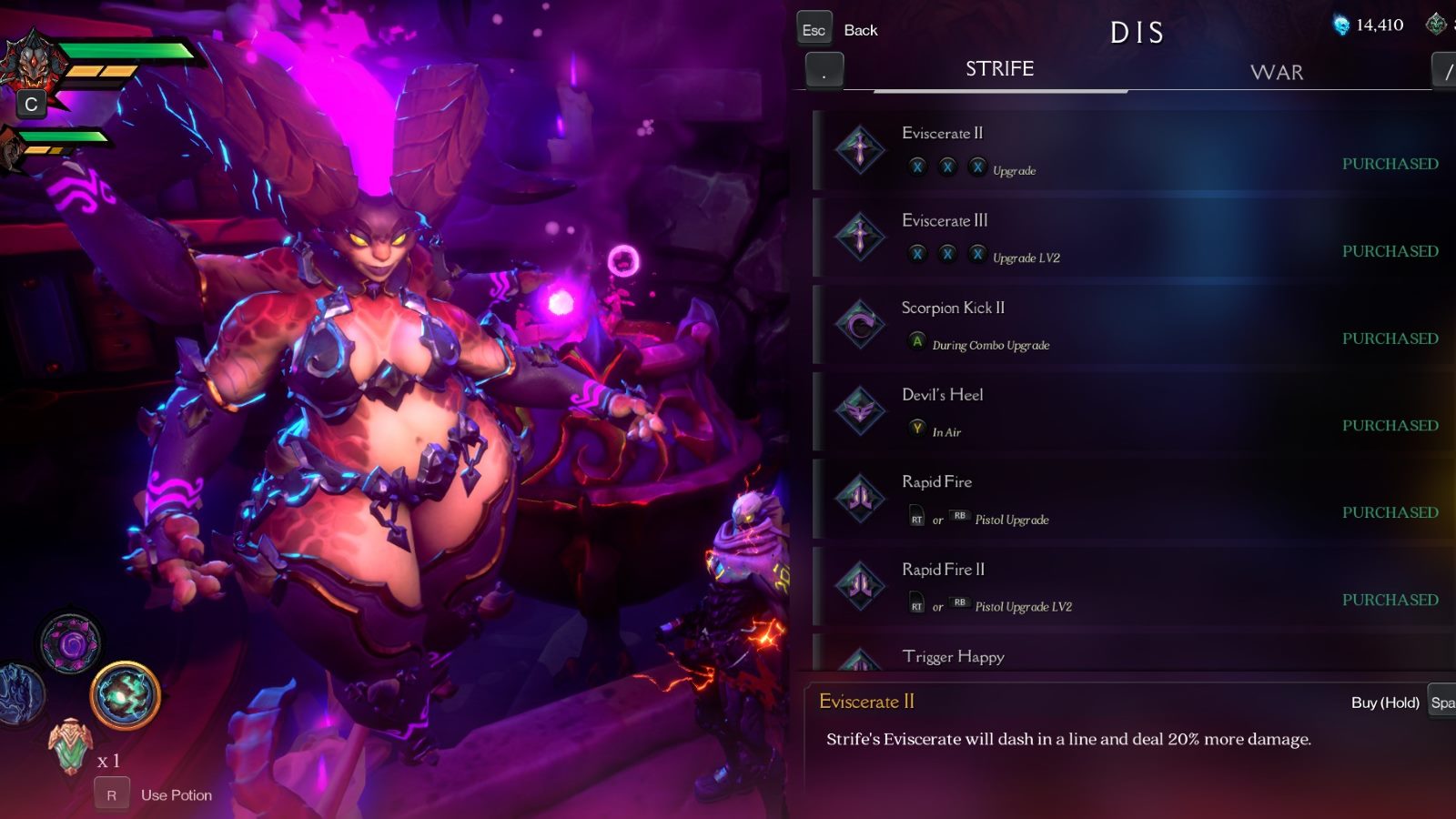 I’ve got no real complaints with the animation, but It can devolve into a fudging clusterfuddle during the bigger fights. The isometric viewpoint isn’t always generous in giving you the sort of tells you require for useful dodging, or blocking and parrying as War. The same perspective quirks that can make navigation a chore sometimes crop up in combat, too. In a particular egregious example of weapons-grade bollocks, I once got trapped in a puzzle-mandated pit with two giant scarabs, who gassed me to death with their unavoidable poison sharts. A bad time, it was.

As well as souls, which you can spend on new moves, health upgrades and the like (that is to say, any character action you care to name), enemies and bosses also drop ‘creature cores’, which you can slot into a menu to gain bonuses. These can be everything from minor stat buffs, to a chance to summon friendly killbugs or leave a trail of lava behind you when you dash. You can also upgrade each core, improving its effects, by collecting more of them in missions. 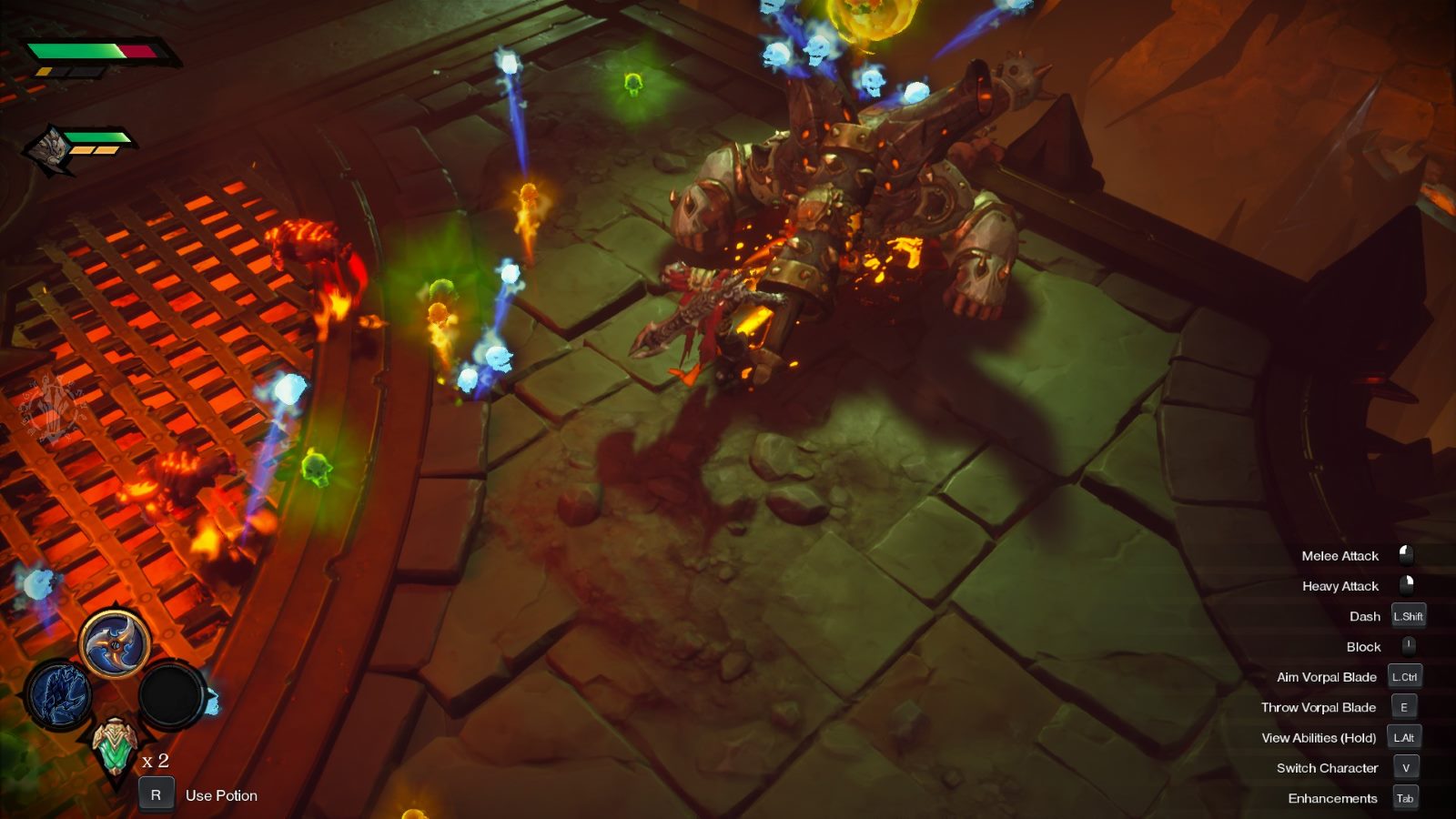 This is where the endgame comes in. Each unique boss also has a core to collect, so you have to replay them multiple times if you want to max everything out. Then, there’s a combat arena with something like fifteen increasingly difficult tiers. Perform well, and you’ll earn a special currency you can spend on yet more ways to get beefier. It all culminates, of course, in an endless wave mode you unlock by beating everything else. With the hard and bastard hard difficulty, I’d say you could easily double the eleven hours it took to me finish on normal.

So yeah. Go on. Genesis is so unashamedly mid-tier (and I don’t mean this pejoratively, it’s great to see this sort of budget project surfacing again), and so overflowing with proud mid-decade nostalgia, that it’s easy to overlook its annoyances.

Plus, it’s twenty seven quid. Get a mate. Go halves. Push some buttons. Do a fistbump. Eat a triangle shaped crisp. Crush a can of alcohol. Heck, crush two! I had a genuinely good time with it for at least 75% of the time I spent playing it. If you’re actually into the series as a whole, I imagine you’ll have an even better one. And if you like horses and all, you’re sorted. 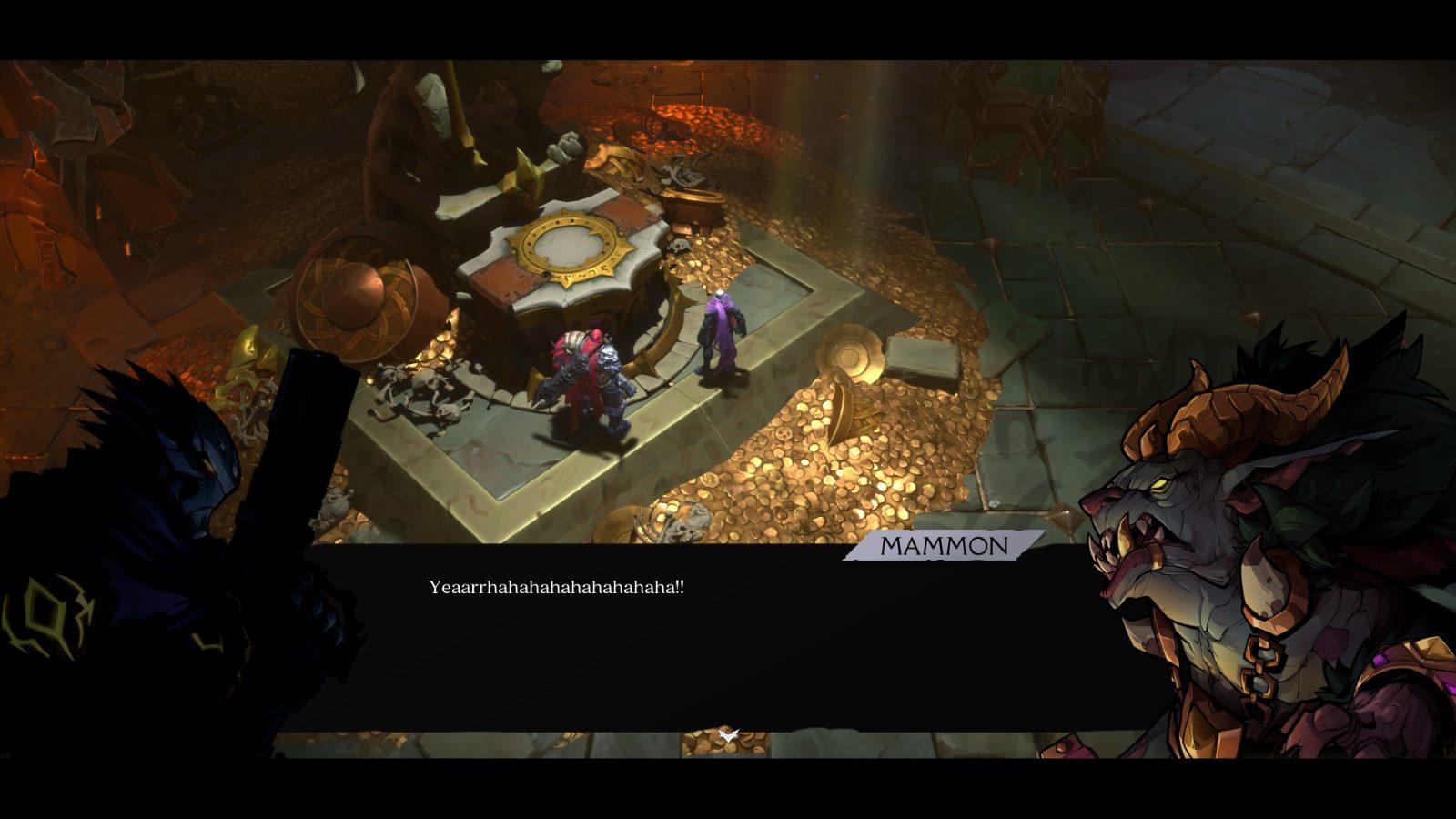