If you click on a link and make a purchase we may receive a small commission. Read our editorial policy.
Developer: Pony
Publisher: Pony

Oh my, reviewing Globesweeper has proven to be one of the best things I've done of late. Because the tips in the comments for other puzzle games to try are making me such a ridiculously happy boy. After the really brilliant Tametsi, I've been playing last year's Delete, from LineWay creators Pony.

Right, so, as is the way of all these puzzle games I need to construct what it is out of the fragmented remains of those who came before. Delete is Hexcells meets Minesweeper meets Picross 3D. There, job done, let's all go outside for a walk.

Oh, you need more detail? Fine. Each puzzle is a three-dimensional shape built out of cubes, with the puzzle taking place on the visible faces. As with the aforementioned, your goal is to work out which faces/tiles are highlighted, and which are deleted, the latter revealing further clues for the former. And matching said form, if you've a '3' on a tile, then three surrounding tiles will be highlighted, the others eliminated - and which three it is can be determined by the surrounding overlapping clues.

But in 3D, this means "surrounding" is a little more liberal. You have to approach it with the notion that it's any side, any corner, of any tile, even when that goes around and edge, or touches corners on two sides of the object. Then on top of that, there are all the other rules it gradually introduces: Arrowed numbers that apply to an entire row or column, those with marked corners that don't apply their rule to tiles touching sides, and vice versa, and others more complicated as you proceed.

And that all works! It's never particularly difficult once you've got a head for the puzzle type, a process of elimination that doesn't really extend your brain beyond spotting overlapping contradictions of rules. It's all pleasantly presented, with very calming ambient tunes and subtle wildlife noises. But... 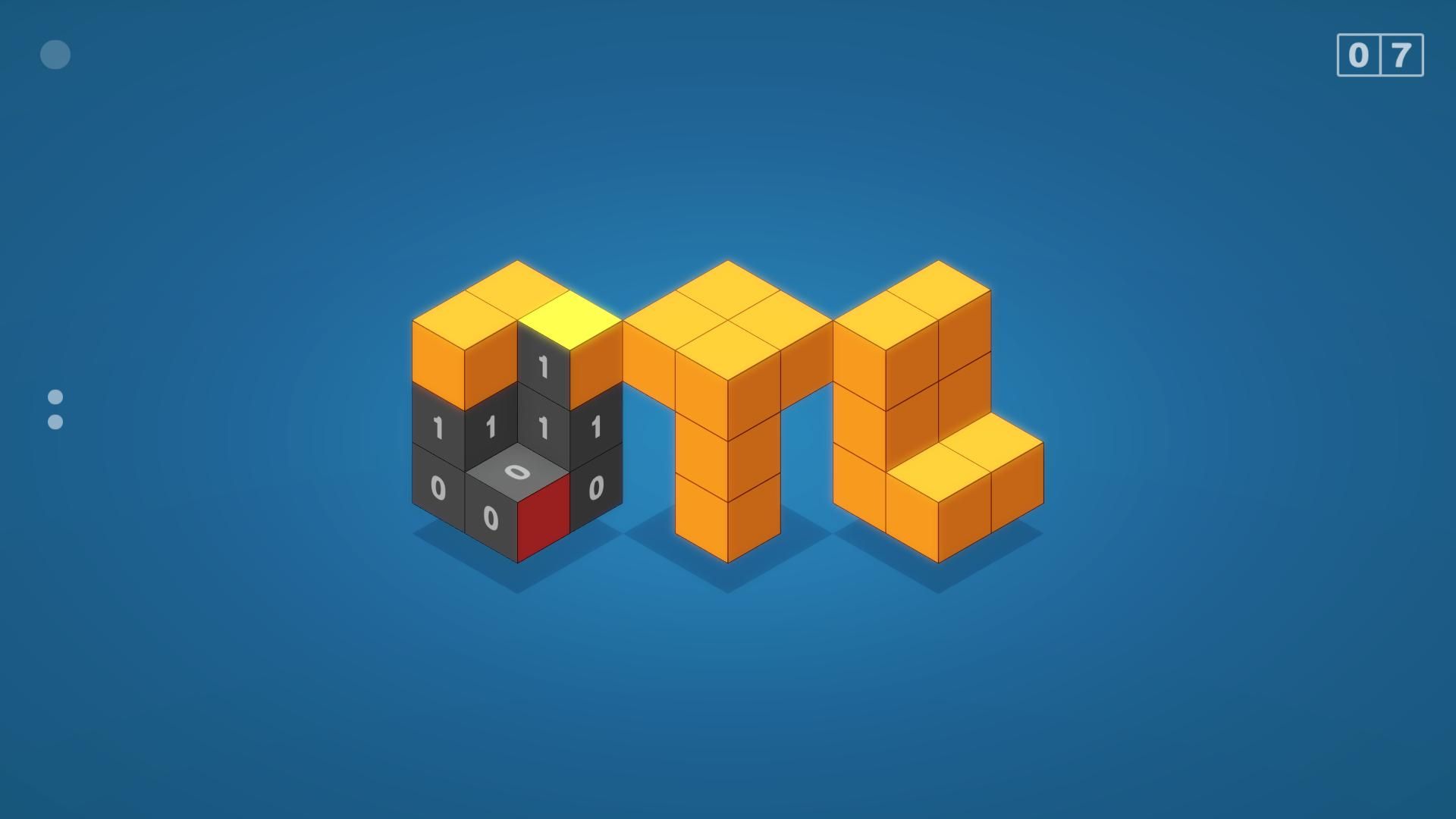 Huh, I've got two different "buts" to put on the end of that line. One a positive, one a negative. Let's go negative first, so we can recover ourselves with the good news after.

But #1, it has a really bloody weird way of numbering its clues. Traditionally in all these puzzles, whether Hexcells, Minesweeper, Fill-A-Pix, or any other variant, the numbers stay the same throughout. Here, for reasons that probably felt like they would offer more clarity, the numbers count down as you fill in tiles around them. Your '3' becomes a '2' when you highlight one tile next to it. Which, immediately, sounds intuitive and sensible when written down here. In practice, it's a huge pain!

If this were the first puzzle of its type you ever played, you'd be grand. But if you've ever played any other, you will be constantly tripped up by it. You'll see a '2', see two tiles marked next to it, and think, "Ah, all the others can be deleted then," because THAT'S HOW IT ALWAYS WORKS! Except not here. Oh my goodness, every time I relaxed into it, I made this mistake. 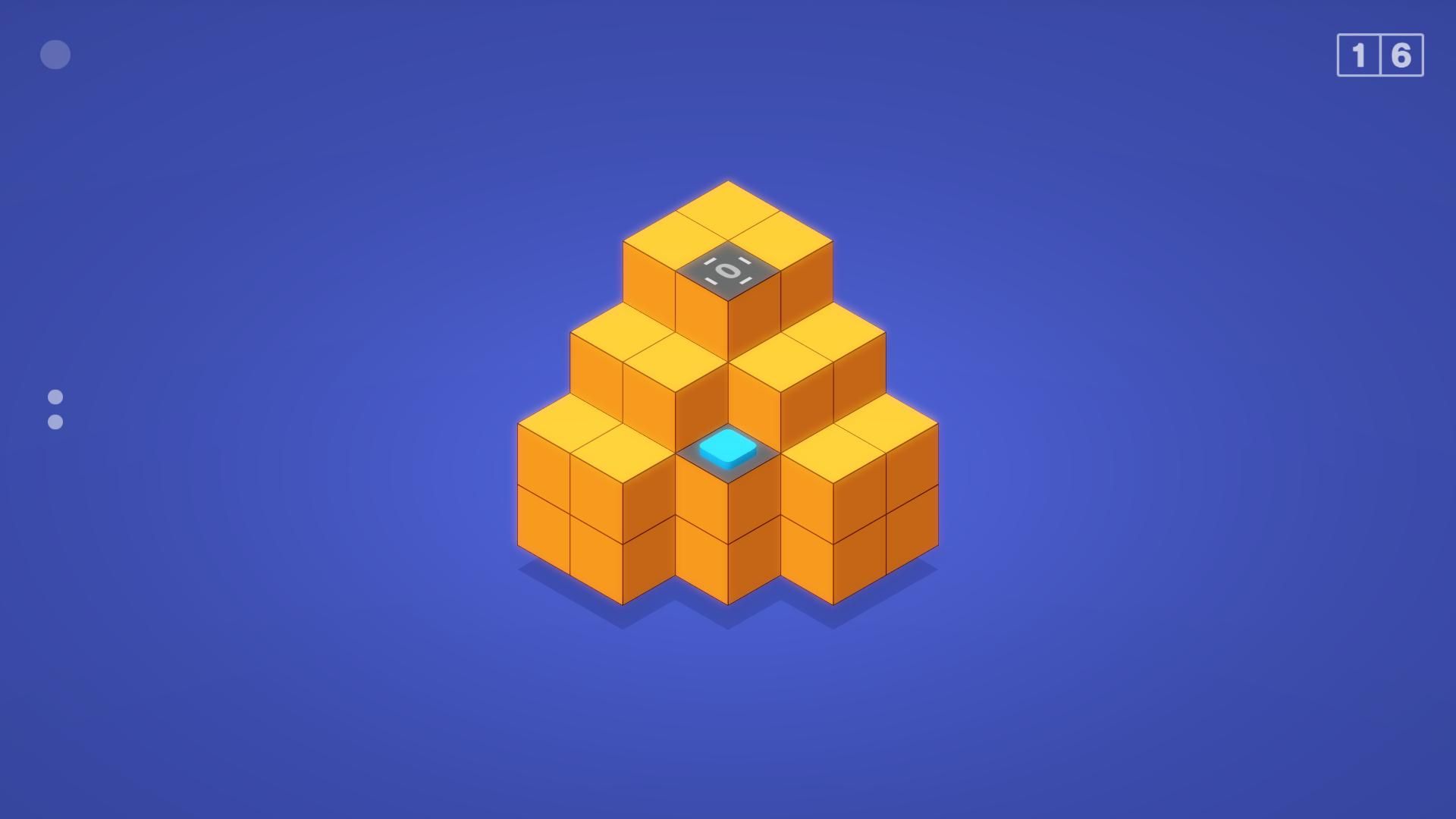 But #2, when the levels have buttons, this comes into its own. Oh my, what a difference they make. A little blue button or two appear on one or more of the faces, and it switches from a decent enough take on an old idea, to something dynamic and interesting that I want to make everyone play. Click that blue button and chunks of the puzzle move about.

It might have a cube grow up and out into a staircase, or cause a block to slide apart into three overlapping sections, or have a particular column of the puzzle rotate. There might be two buttons, which have two different intersecting sections move about. And wonderfully, as you do this, it of course changes the numbers on tiles affected by the move. And in doing so, allows you to infer so much more information. If a 2 becomes a 3 on three different sides of a rotating column, but a 4 on the fourth, you can perhaps discern which tile it is that makes the difference, and mark it - and of course eliminate all the corresponding tiles on the other side that didn't make a difference. Or just expanding the shape means new information is revealed, allowing you to solve so far until you hit a dead end, then press the button again to return to the former shape, and see what the tiles you've altered change once you return.

You can end up switching back and forth between three or four different puzzle states, and having each influence the next, making for such a satisfying experience. And oh my, I wish the whole game were like this. What an unqualified recommendation I'd give it. I'd even forgive the descending numbers madness. 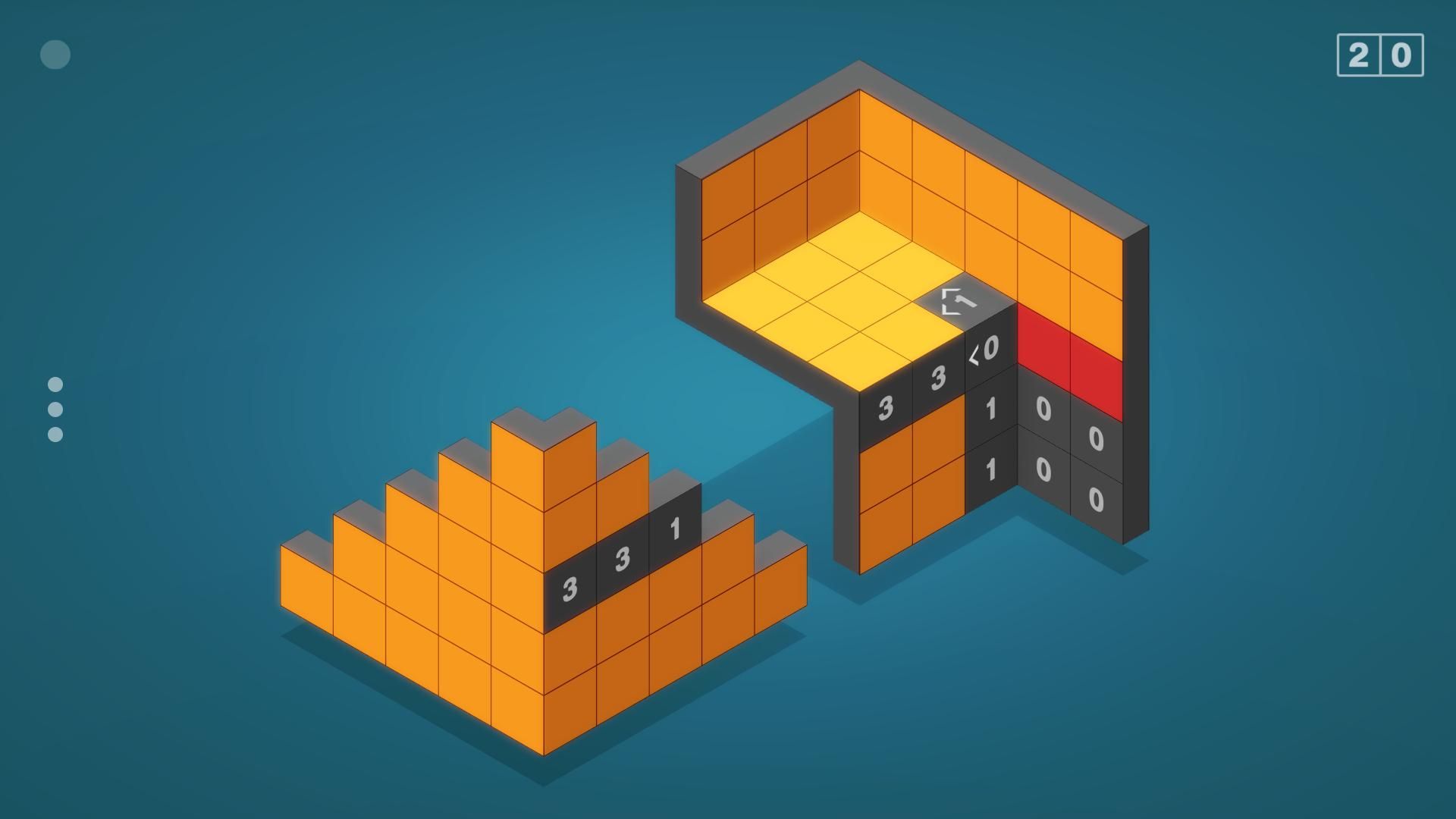 The result is a very decent puzzle game, that occasionally has completely inspired puzzles within it. If it could have focused on the buttoned levels, gosh, it'd have been a real classic. As it is, it's a calm, gentle game, with intermittent moments of brilliance. Apart from that bloody descending number thing.