Disco Elysium is my secret side infatuation in 2018. First the game was operating under the name "No Truce With The Furies" which the devs didn't think stood out enough (!!) and then each new look I get at the game reveals a more complicated and exciting RPG about crime solving and I just want to be playing it now. Not even for first play-though; I want to be on my third play-through where I'm deliberately trying to break the game. Bonus: there's an original score by the rock’n’roll band British Sea Power. What isn't to like here? Well, depending on how upset you are by complicated moral choices, this new set of skills listed for player development might be your cut-off point -- because it gets dark.

Disco Elysium is a blend of isometric RPG and hardboiled cop show with a unique urban fantasy setting. You play a disgraced lieutenant detective in Revachol West, a shore town where corruption’s out of control, murders go unsolved, and the kids just wanna dance. The game allows you to build you detective using 24 different sets of skills, and branch out into everything from a smashmouth battlehound to a cunning master of the human psyche.

We've given the game just... a lot of coverage here at the site. Alice wrote up why the game took longer as the team realized the potential to expand the scope of the game. Dominic wrote up a breakdown of the psyche skill tree last month, showing how you can be everyone from a Lynchian empath to Columbo to a descendant of Sherlock. For a game where you manage your memories as their own inventory, allowing a Sherlock-type to take control of your mind-palace isn't the worst plan of action.

Now we've got the list of comparable skill sets, not for the brain, but for the body. And they all over the gosh darn place with their pros and cons. 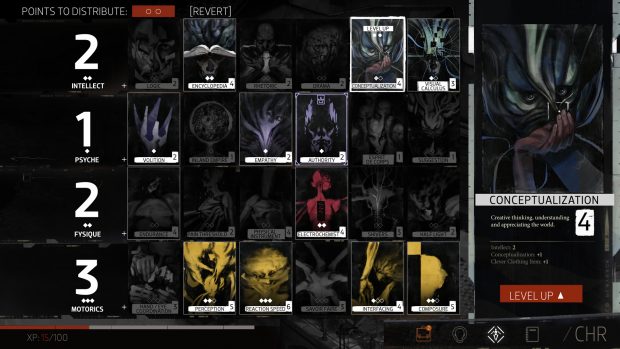 The Physical Instrument path defines some of your punchy-traits while also influencing you emotional by pushing you from mean vibes into cruel masculinity. Electrochemistry, one of the most unpredictable skill sets in the game, allows you to activate powerful sets of magical talents, but often can also wind up turning you into a full-on drug addict, which results in non-optional quests as you begin a relationship with dependency. Endurance makes you last longer but also twists your gut feelings and cool cops in this world can only survive a few heart attacks. Half Light is your flight of flight responses, which can make you both more and less aggressive as paranoia or terrifying concepts begin to plague you. Pain Threshold keeps you going but also keeps you an unhealthy person for longer, putting you in real danger. Finally, there's Shivers: a set of skills that are secretive (as they're tied to the game's story) but it puts you in tune with the general vibe of the city.

You can check out the entire, very detailed post on these skill sets right here. Putting high or low amounts of points into each of these categories sounds like it creates a horrifying balancing act and I am keen to roll those magical dice.

The game is available to start following on Steam.