Me: someone who believes that gothbro apparent trickster god The Outsider is the worst thing that ever happened to the Dishonored games, and thus positively relishes the chance to kill the blighter.

Also me: someone who is absolutely determined to play Dishonored games without causing even a single fatality.

Death Of The Outsider is simultaneously Dishonored 2.5, a delayed sequel to Dishonored 1's excellent Knife of Dunwall/The Brigmore Witches DLC and potentially/theoretically a conclusion to the series as a whole. Whether that last point is dependent on sales figures or creative impulses, we can't say for sure, but if this is to be the end, it's a good one. 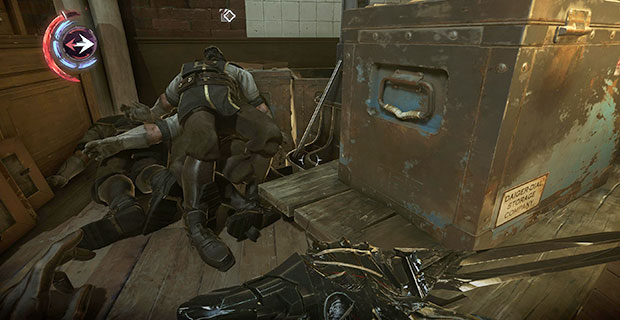 Death of the Outsider suits me in ways Dishonored 2 didn't. It begins in Karnaca, the setting for the second game, but it's a very different proposition both in terms of its story and its approach to stealth. The player character this time out is fallen assassin Billie Lurk, and we follow her through a mix of new and recycled environments as she first searches for her lost mentor (and returning Dishonored 1 antagonist) Daud, then attempts to put an end to The Outsider's smug riddling and pernicious interference.

For whatever reason, I click more with this series whenever it's focused on the world's underbelly rather than the woes of betrayed high society types. It was tricky to empathise with members of a ruling class who oversaw a society that seemed perpetually to suffer. But it's the change in pace that really works for me. 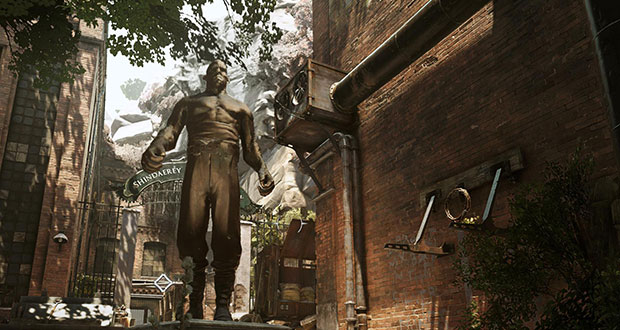 Dishonored 2 had some fabulous moments, but at times it felt like work - the long road to gather runes and upgrades, to slowly become akin to the character I was by the close of the first Dishonored. DOTO grants effectively its entire power set right away, with subsequent upgrades focused on refining your aptitude at either stealth or combat. I also felt safe in the knowledge that the denouement is not too far away, although the game is long enough for you to stretch your legs - depending on your playstyle, you're looking at anything between three (running and shooting) and ten (creeping and choking) hours of play.

For the record, I was towards the latter, because I'm one of those who feels compelled to stick his nose into every nook and cranny in addition to being determined not to take a life. I felt broadly satisfied with the length of this thing, but adrenaline junkies may feel short-changed. This has forever been the Dishonored problem, of course. 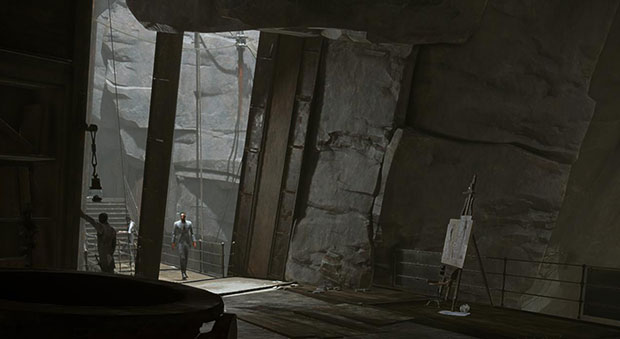 The power set here is smaller and leaner, with really only three magical abilities on top of around half a dozen weapons and gadgets, and not too much that could be filed under Weird and Wonderful. By and large, that makes DOTO more cleanly a stealth and/or combat game rather than a sort of supernatural superhuman sim. Again, this suits my own tastes and needs and, if you so choose, brings this more in line with the stealth games of yore rather than leaning heavily on the fantastical.

Even the only truly new power here, Semblance, is effectively a magical variant on Hitman's stolen disguises concept. You steal an NPC's appearance with a spot of faceswap juju, which can be used to enter areas unquestioned, or in some cases complete objectives through conversation. The catch is that it only lasts a few seconds so you need to be highly tactical about using it. You can also play pranks on guards while also being a clever stealth-person, as in this video. 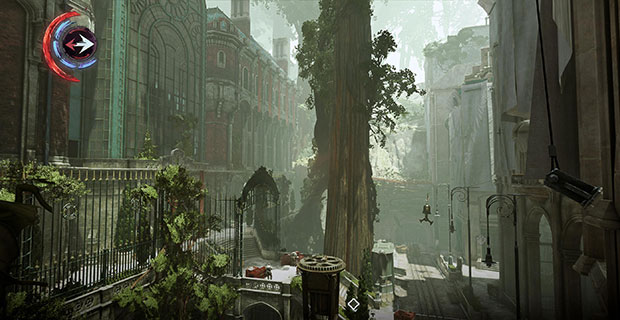 It's brilliantly tense, and in some cases the game is delightfully reactive to it, though the time limitations prevent the game from becoming the playground of identity theft it could and perhaps should have been, leaving Semblance as more of a throwaway toy rather than a doorway to brand new things. Perhaps if we ever get a Dishonored 3...

In any case, DOTO feels focused in a way that the previous game, for all its successes, did not. On the flip side, this means perhaps fewer gosh-wow moments and more getting on with the art of the steal, though it does boast what I would argue are the series's most gorgeous cityscapes to date as well as a long'n'large centerpiece bank job that makes it impossible to argue that Dishonored is not the heir apparent to Thief. 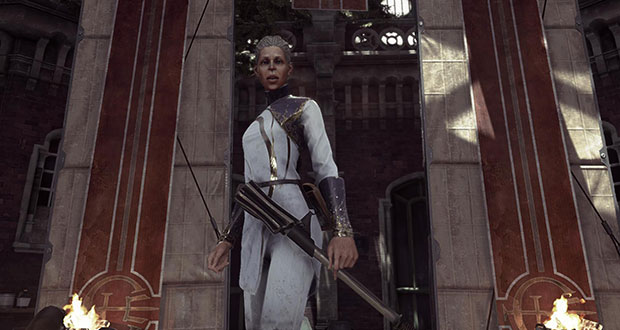 As well as its sheer size – and the glittering trophy of eventual access to its bus-sized central vault – the great joy of the bank is that you move repeatedly back and forth between its floors, bypassing security, uncovering secrets and each time accessing new rooms or encountering new challenges as you slowly, slowly peel back the layers of this loot-filled onion. In that, it’s like a capsule version of a System Shock or Arkane’s brilliant 2017 game, Prey.

That said, it’s not necessarily my favourite part of DOTO – the preceding level, made up of many extremely tall buildings, and with a greater focus on finding and deceiving NPCs, was stronger overall, and comes across like its own, condensed greatest hits of Dishonored. But Dishonored deserves, nay needs, a bank job, and I’m very glad to say it gets a good one. And this is the right place for it too: Corvo or Emily wouldn’t rob a bank, but Billie Lurk would. That’s who she is. 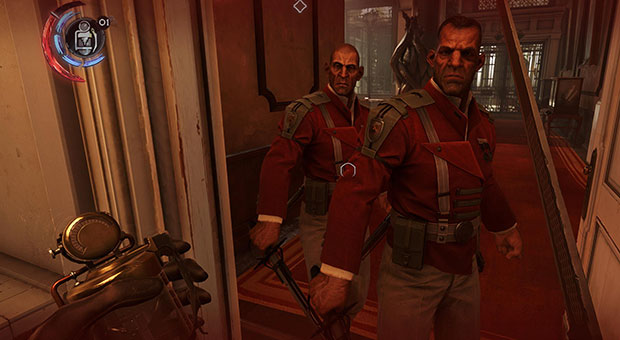 Billie isn't a royal on a revenge quest: she is a thief and an assassin, and this grimy, deadly place is her world in a way it was never truly Corvo or Emily's. Unfortunately, though Billie's voice actor Rosario Dawson nails the basic essence of hard-bitten strength and weariness, she doesn't manage to imbue the character with any other traits in scenes that sorely need it. There are many monologues here, and the rather one-note performance meant I cared a little less than I felt the game wanted me to. But I was here for the heists more than I was for the story. Despite the joy of the level design, the story is central though, which makes this a pretty poor place to start if you've never played a Dishonored game before.

The first four chapters of series-traditional thievery and takedowns lead to a fifth which does indeed dictate the fate of The Outsider, the whiny-voiced dark god who has been both assistant and foil to other Dishonored protagonists, and the worship of whom has been at least partly responsible for many of the land's various miseries. I will not spoil what happens, despite the game's title apparently doing so, but there are choices to be made. 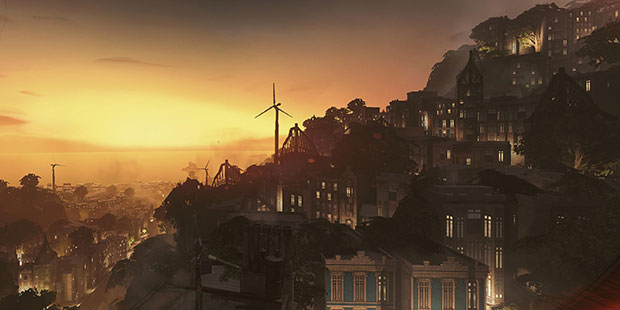 I know The Outsider has his enthusiasts, but I've never much enjoyed either his sub-G-Man, walking deus ex machina status in a game that's essentially about figuring out my own solutions, or his preening, says-everything-without-saying-anything characterisation. To DOTO's credit, it builds on Dishonored 2's attempts to provide justification for why he comes across like a sneery teen, as well as raising doubts about whether killing him is at all morally justified.

I don't think it quite succeeds at this, mostly because too much is withheld for the closing scenes of the game, but my feelings were a whole lot less clear-cut coming out of DOTO than they were going in. On the other hand, and being as careful as I can to avoid spoilers here, if you've never liked him and nothing that goes down in DOTO changes your mind, the game will still work to satisfy you. 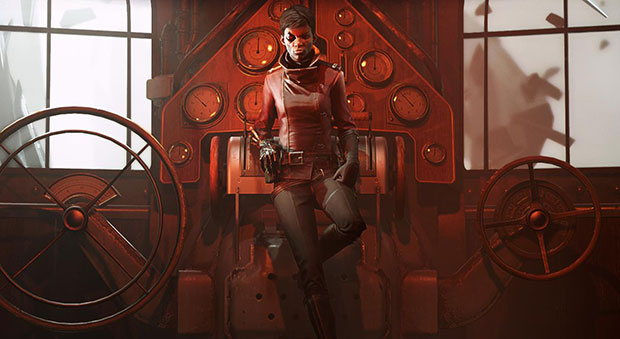 As to whether this is a fitting (if hopefully temporary) goodbye to Dishonored as well as the Outsider, I would say yes, though with some hesitation. I don't think the last level is as weird or inventive as it needed to be, and its relative straightforwardness washed away the more awe-struck feelings of scale, possibility and beauty I'd got from the game's middle straight. It's a shorter tale full of high-points, and wraps up lingering storylines while also leaving the door open for further adventures in the world of Dunwall, Karnaca and beyond.

From here, the future of Dishonored isn't clear, but if these were indeed my last days with the series, I'm glad and grateful they were spent playing a solid, focused stealth adventure set in a sometimes incomparably beautiful place.