If you click on a link and make a purchase we may receive a small commission. Read our editorial policy.
Premature Evaluation is the weekly column in which Steve Hogarty explores the wilds of early access. This week, he's not inhaling in Drug Dealer Simulator, a game about... well go on, maybe you can take a shot at guessing this one all by yourself.

Drugs. Satan’s mustard. The devil’s garlic. Hummus from below. Whatever you call the good gravy that police hate, we can all agree that it’s incredibly fun to have a crazy drugs party, right? In fact, all this talk of drugs reminds me! Last night I found an entire bong’s worth of marijuana in a wheelie bin behind my local Tesco Express. Would you like a toke? Please have as much as you like, I’ve already doobied myself up to the rafters. I’m absolutely stuffed.

Stop right there. You are under arrest. Drugs are illegal and you’ve just broken the law, Cheech. Time to apologise to the queen and spend the best years of your life behind bars, brewing Pinot Grigio in a toilet cistern and swapping cartons of Marlboros for posters of Raquel Welch, or whatever it is that goes on in prisons. You had it all and you threw it all away for a taste of that sweet, sweet mousse, you dang idiot. What a tragedy. 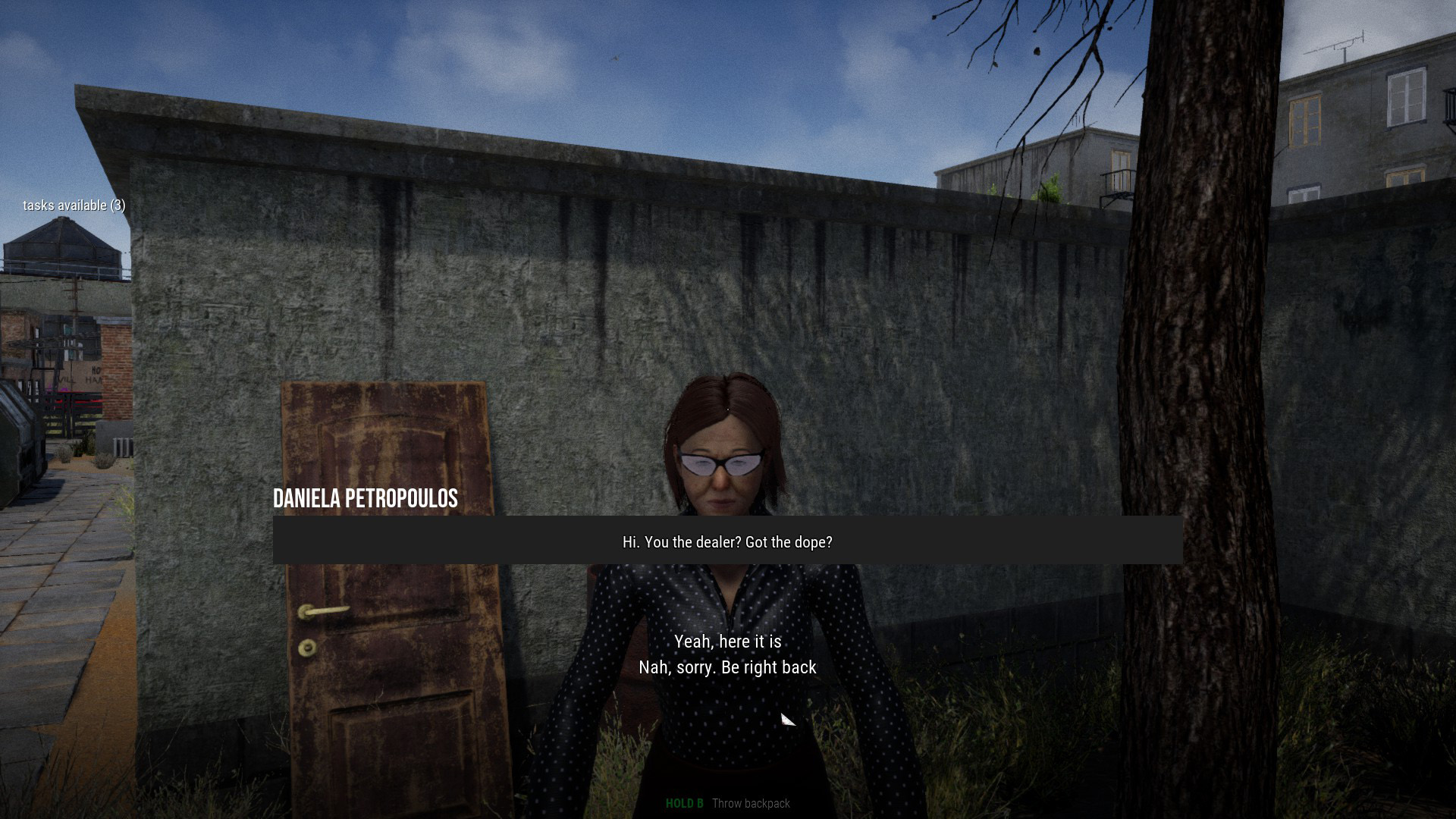 Okay relax, you’re not really being arrested – the bong was full of harmless nicotine – but it is my legal requirement to scare you all straight before we talk about this week’s Premature Evaluation. Drug Dealer Simulator is a game in which you sell illegal narcotics to dead-eyed clients in order to fund a lavish lifestyle living in a threadbare apartment with just a cupboard, a laptop, a drug prepping station and a grotty stove for company.

But unlike so many other drug-based games – which invariably have the aesthetic, depth and production quality of those crappy Ebaum’s World Flash games you’d play during computer science lessons while the teacher was out – this is an unexpectedly well put together thing with plenty to do. It’s set in a deserted district of some economically battered city, populated by what seem to be animated mannequins who roam aimlessly through abandoned streets and stand motionless in rusted playgrounds like sad ghosts with unfinished business in the mortal plane. 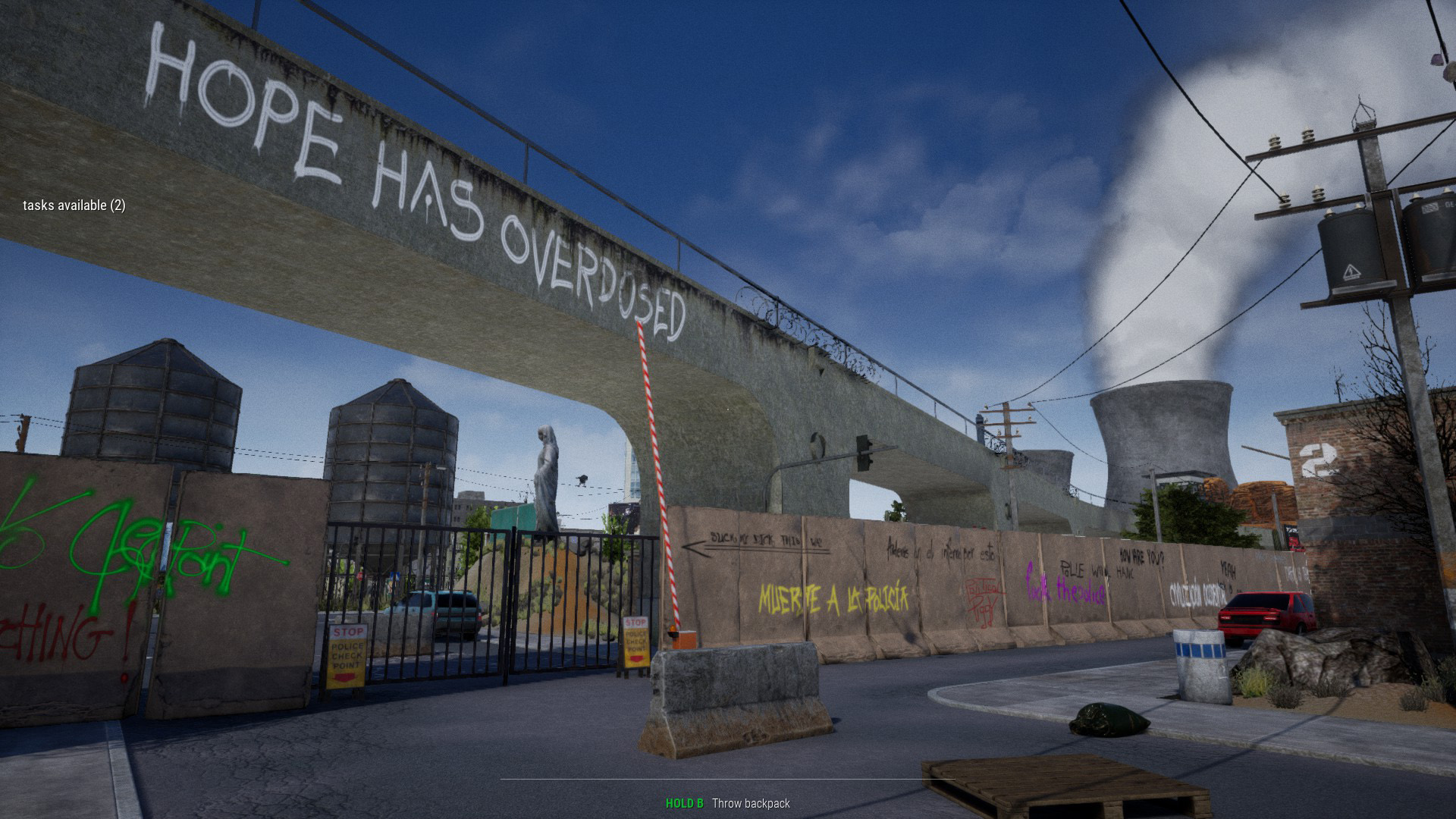 Overhead you can spy passenger jets tracing thin white contrails across the sky, an unexpectedly pretty detail, a symbol of escape evoking the sense that the world outside of this forgotten place is thriving. It’s the kind of graphical pathos somebody who actually does smoke a lot of weed wouldn’t be arsed to include, so it’s a pleasant surprise to find it here in a game whose opening title screen includes the warning that it contains content “inappropriate for whining bitches”.

So, you buy your drugs wholesale from a man called Eddie, a cartel representative who, along with your abrasive inner monologue, forms the game’s opening tutorial. A consummate professional and proponent of social distancing, he’ll never hand over large quantities of weed and amphetamines to you in person. Instead he’ll leave a dead drop somewhere in the city – in a bin, under a bush, inside an air vent – which you’ll have to track down and retrieve. Leave it too long and somebody else might swipe the goods, leaving you out of pocket to a cartel, which movies and television reliably inform me leads nowhere good. 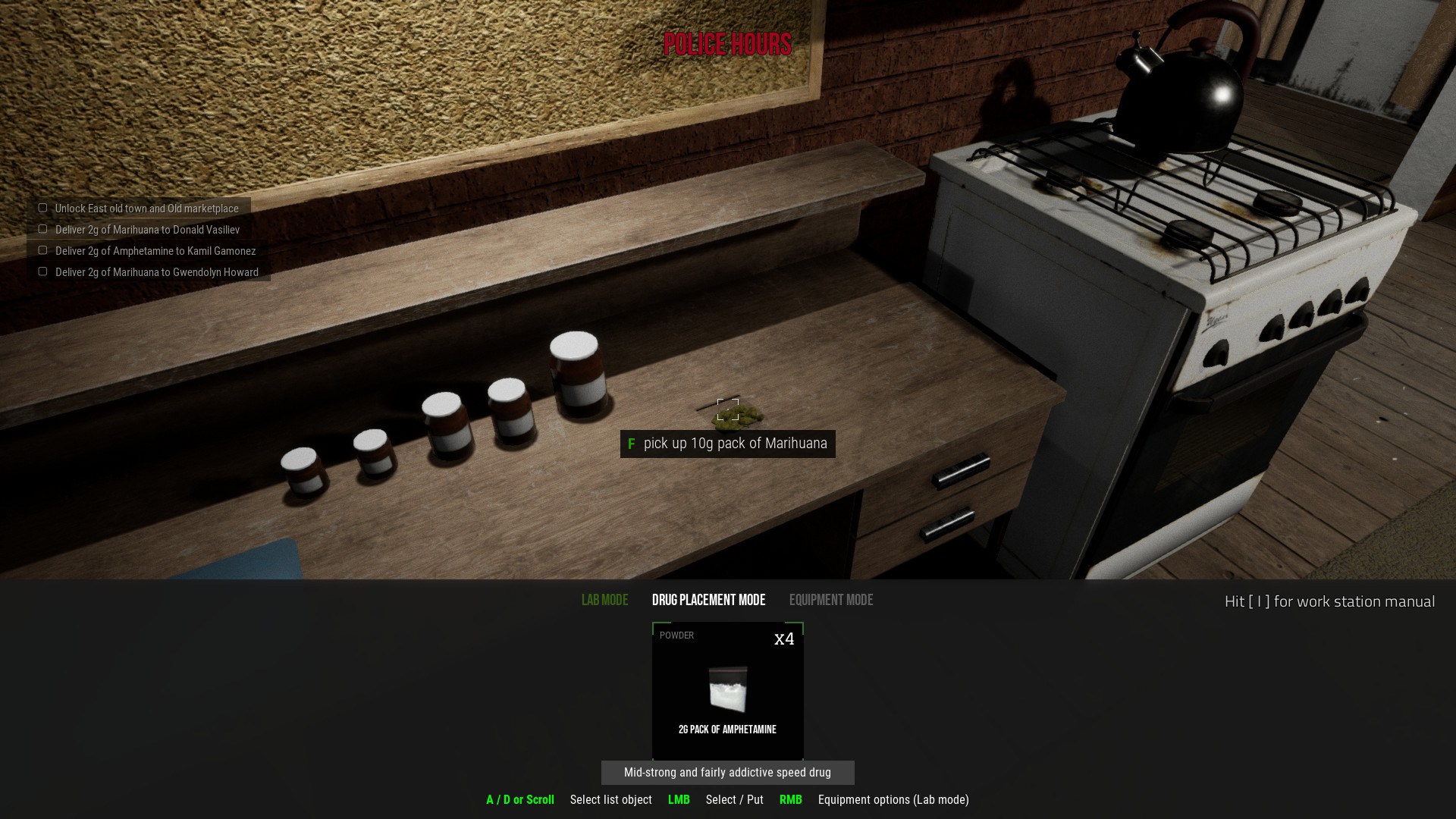 From there you can cut your supply with things like baking powder bought from the local gas station before packaging up your personalised product in baggies, interacting with clients through your dark web connected laptop to arrange sales at meeting spots around the city. This drugs preparation stage is, like so much of Drug Dealer Simulator, unexpectedly complex and open to customisation. You can organise your workstation with mixing boards and containers, labelling and colouring certain bottles so you can more quickly grab your crack when it’s needed. Each sale increases your respect in a given area, and when combined with the quality of your product this allows you to charge more and reach more buyers.

The police will do what they can to stop you. After curfew they’ll give chase, but linger too long near a cop during daylight hours and they’ll demand to search you. At this point you can either choose to run or comply, a decision that usually comes down to whether or not you’ve got a boatload of cocaine and drug money crammed into your bag. Larger backpacks slow you down and make you more likely to be stopped, but you can spend experience points to increase your stamina and fence hopping skills, or to make yourself less conspicuous to authorities. There really is a whole lot going on in this dumb and ambitious game about selling drugs. 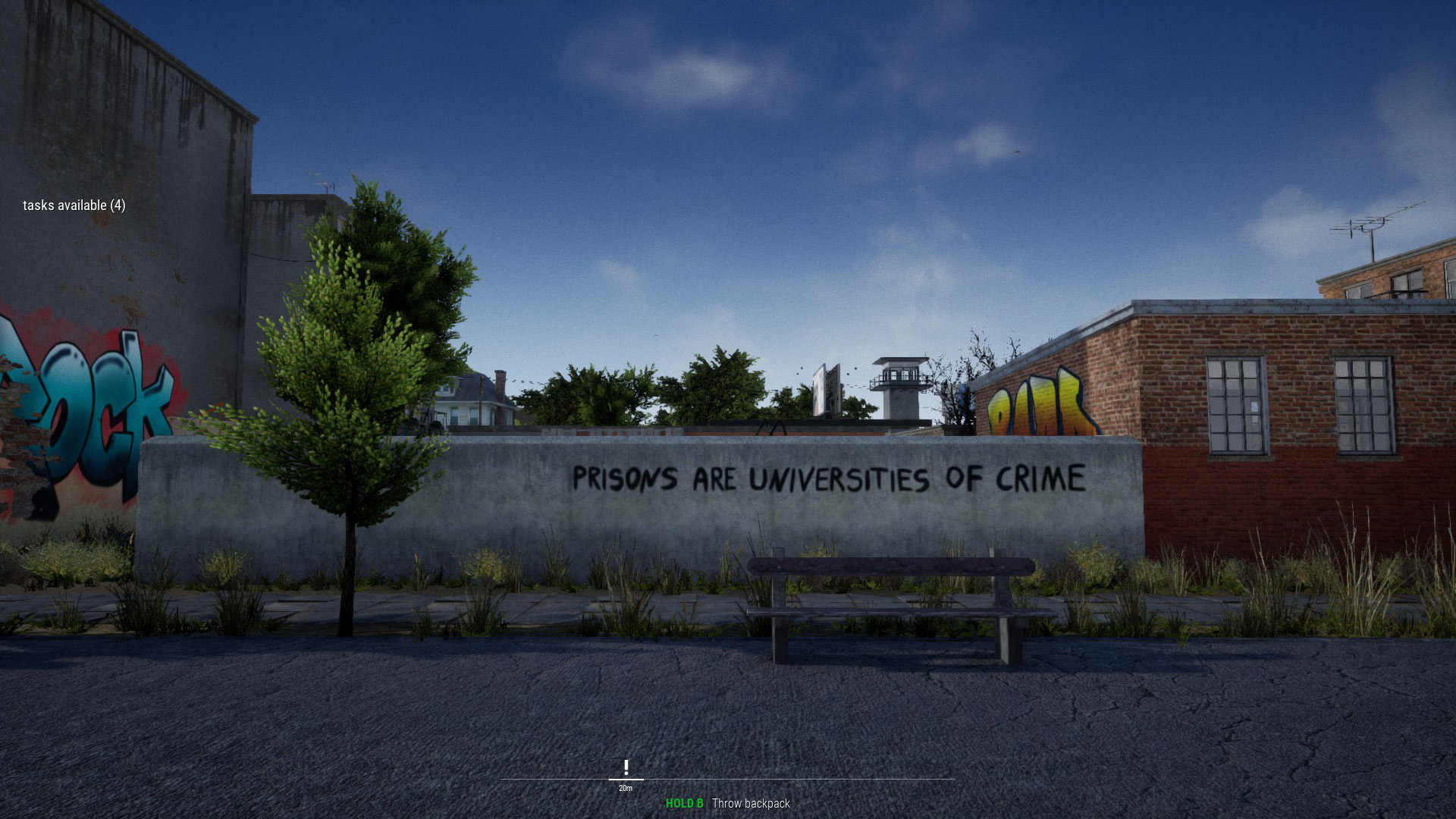 Between picking up from your cartel contact’s time-limited dead drops, preparing a full dinner menu for your growing list of loyal clients, and actually delivering the stuff to all the vacant looking weirdos with their seemingly bottomless appetites for meth, you’ve got a pretty full schedule to contend with. As your area of influence grows and more districts are unlocked, helped along by tagging walls to mark your territory, the game becomes a matter of plate spinning and prioritisation as you take better care of your more moneyed clients with a taste for your higher-value concoctions. This ugly, adolescent, accidentally silly and detailed simulation of the grotty business of selling drugs is, against expectations, actually rather fun.

The writing and voice acting are entertainingly bizarre too. I fell deeply in love with one person in particular, a shady character in full business attire called Gwendolyn Howard, who has the awkward posture of somebody who might crawl out of a television in the dead of night to murder you. She would routinely make another order as I was returning from the badly lit alleyway where I had just sold to her, such was her insatiable love of drugs. 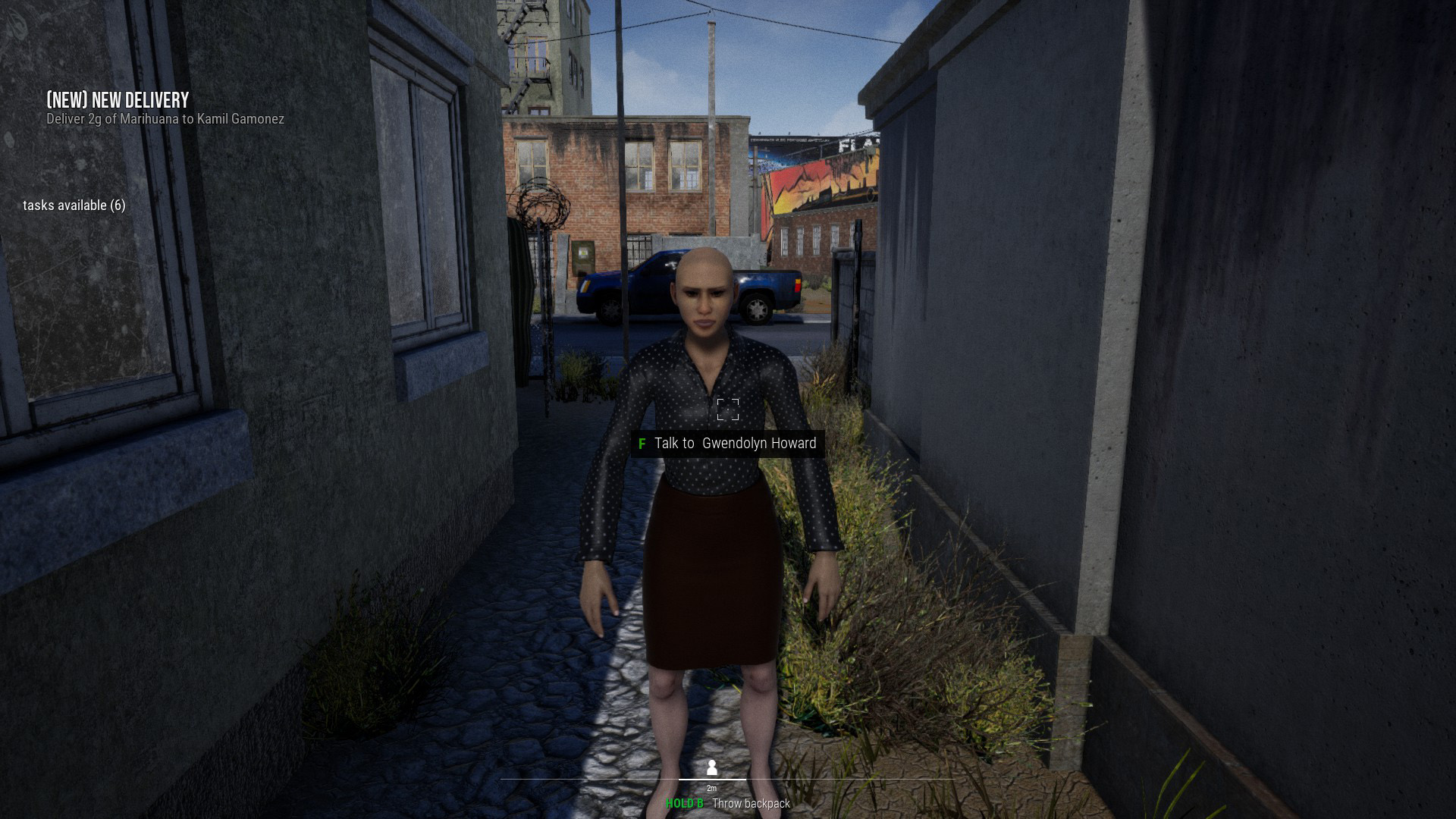 That she always looks so well turned out suggests that, on some level at least, Gwendolyn is keeping it all together. Or perhaps all that’s propping her up is the boundless quantities of chemicals I’m selling to her, and if I were to ever stop she would suddenly evaporate into thin air, just a blouse and a skirt in a little pile on the floor. Like Obi Wan Kenobi. Another hapless victim of addiction in this strange little simulation.