What Remains of Edith Finch is the kind of game that makes the phrase 'visual feast' feel appropriate again, as opposed to just breathless enthusiasm for CGI battle scenes in quoted four-star reviews on superhero movie posters. There is so much wonderful and surprising detail, both ostentatious and subtle, in the rooms that make up its impossible, wonderful house of dreams and death.

So much that it's very easy to miss things that tell extra stories - the sweetest and most powerful stories, and also the stories that the Finch family told each other.

Edith Finch is simultaneously one overarching tale of the generations-long tragedy and farce that afflicted the Finch family, and an anthology of tales about how its various members met their messy, heartbreaking, whimsical or hilarious ends. (It's a much funnier game than it's sometimes given credit for, but that's another story). Latter-day descendant Edith's narration is the main link between these disparate tales of death, but a quiet treasure hunt of small details also provides vital and rewarding connective tissue. It's this stuff that does the heavy lifting of showing what the Finches meant to each other, as well as painting a clearer picture of their own characters.

MILD SPOILER WARNING for various mid-game events below, but not the ending. 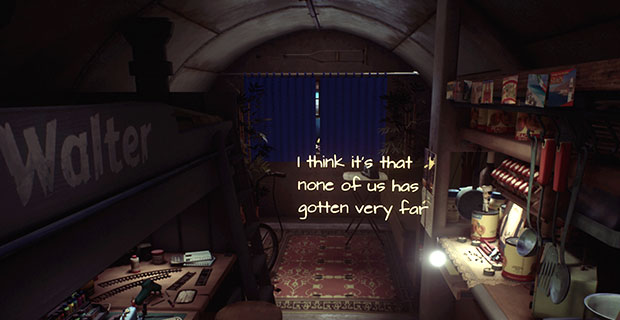 Hidden in a darkened alcove of the bunker Walter spent most of his life in is the crutch that his older sister Barbara used to fend off apparent attackers.

Tiny, tiny inside Walter's gravestone, one of the model train figures he whiled away decades building.

Tucked away amongst Sam's grotesque collection of hunting trophies and army paraphernalia is a toy astronaut stood next to a Lego soldier - a memory of his long-dead brother Calvin, who so longed to fly.

There's also a stuffed cat - the same cat, perhaps, that his even longer dead, never-met sister Molly saw and dreamed of being on her last night?

And, among the few signs that he shared his monstrous room-cum-hunting lodge with someone else, a jewellery stand belonging to his wife Kay - made from deer antlers. The same deer, perhaps, that caused Sam's arguably deserved death.

In Milton's tranquil artist's tower, the boat his brother Lewis later imagines sailing away on.

In Lewis' remarkable far-away kingdom fantasy, the whale that his woefully short-lived uncle Gregory played with in the bath.

And, in Edie's room, paper sculptures of everything her family saw, made, imagined and cared about.

There is so much more - not just the links between the people, but also recurrent motifs, callbacks, sly telegraphing. A vast and intricate assembly of detail, warmth and character. This is a short story game, but it's one that deeply rewards a second play, pre-armed with knowledge of who those people were and how they died, now able to see what all those hidden details really mean.