Corr, remember when we were all making fun of Henry Cavill's wig? It seems only yesterday. And now we're all humming that stupid song. Can't get enough of that there The Witcher on Netflix. Recently, VidBud Astrid walked over and was like "We should have an analysis of the bathtubs in The Witcher TV show and The Witcher 3," and for a moment it was like the grizzling clouds parted and the sun shone on Brighton again. We should have that! And dammit, we shall.

The powerful memetic qualities of bathtub Geralt, originating from the opening cutscene of The Witcher 3, meant that a single screenshot ended up being referenced in episode five of the Netflix adaptation. But which bath is best? One must be, right? There must be a fair way that we can pit the two against one another, resulting in an ultimate champion. Well, at RPS we take baths and needless competition very seriously, so have come up with an exclusive and definitive rating for both bathtub Geralts.

I am a bit of a bath aficionado (bathficionado, if you will) and happily took on this task, with some advisement from other staffers. After some discussion we honed in on six individual categories which are key when measuring the quality of a bath. When taken together, the scores in each BPI (Bath Performance Indicator) can be averaged out to give an overall TBS (Total Bath Score). This gives a fair and indisputable winner, so I don't want to see any disputing, y'hear me?

Right out of the bat we have an important factor. Size of the bath can be a partial determiner for all other factors, and should not be taken for granted. When looking at The Witcher 3's bathtub Geralt - the original, we might say - it is clear that the size of the tub is inadequate. 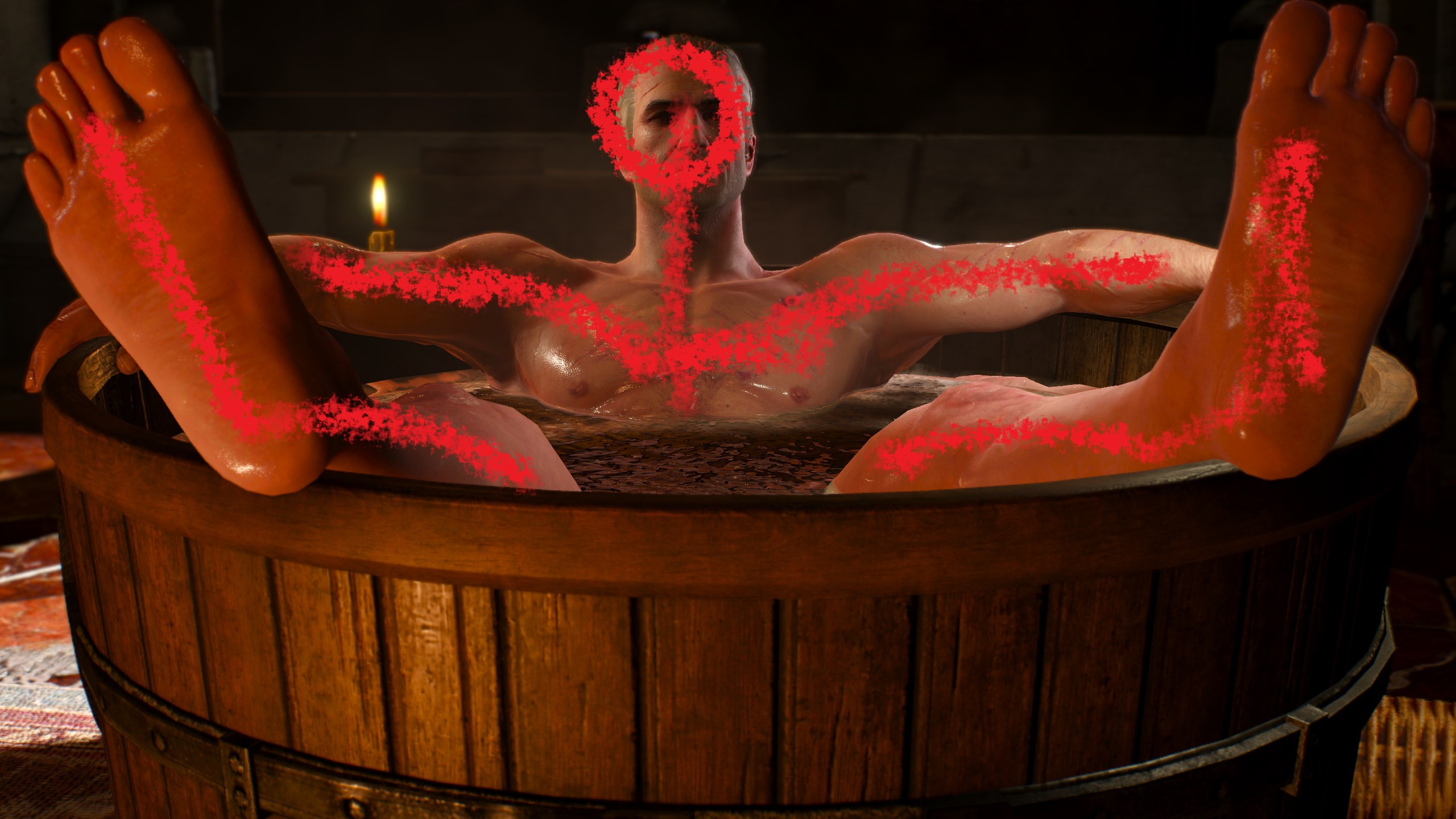 As the above diagram shows, if Geralt were a crudely drawn stickman, almost 90% of his stick body would not be in the bath! To properly immerse himself, he would have to adopt a semi-fetal position. I'm not saying that we don't all occasionally do that in our bath (or the bottom of our shower), but it's not the ideal. 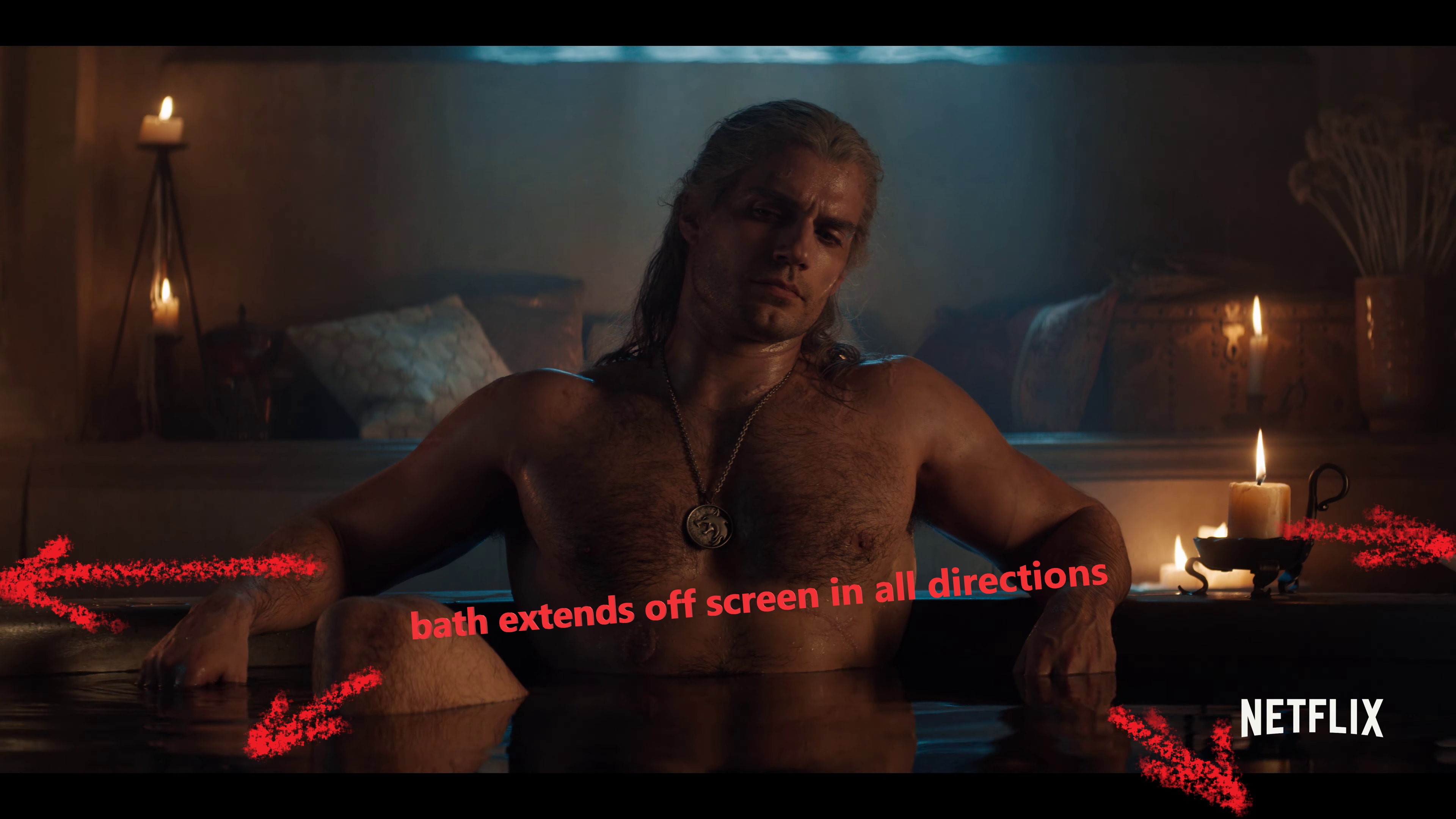 The product you use in your bath can make or break it, and there is a woeful lack of product in both Witcher bathtubs. In a wide shot of the TV there are a couple of nondescript pots, but no evidence of what they are or that they are put to use. The Witcher 3 bathtub does have some suds still in the water, though, so it can pick up some points there.

I understand that even having a bath with the kind of technology in the world of The Witcher would be, at least for regular people, a lot of effort, but I do feel that even low fantasy settings could stretch to, e.g., a soap on a rope.

Also a fairly critical factor, the temperature of your bath is a flighty mistress. You often start off way too hot, then move into the optimal soaking period as your body temperature rises and the water temperature lowers, eventually reaching harmony.

This metric is hard to judge here since, in a shocking oversight, neither property bothered to include a thermometer on screen. Context clues indicate that both baths are in their latter stages at this point: the suds in The Witcher 3 bathtub have largely receded to the sides and there is no steam visible in the TV show. From this we can assume they are both tepid at best. 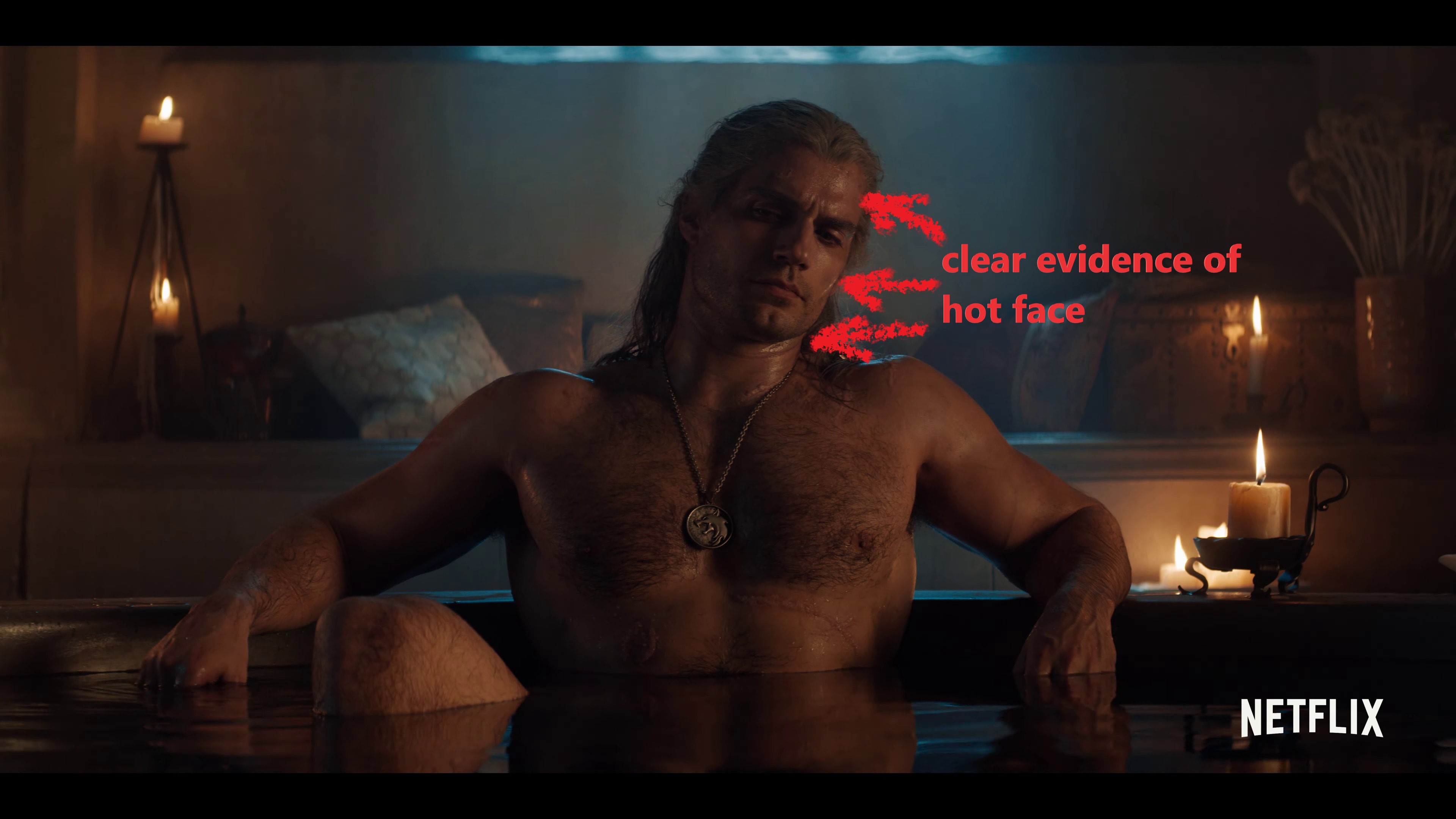 The relative size of the bathtub in The Witcher 3 now comes back to play in its favour because it would lose heat at a much slower rate, leading to a prolonged optimum temperature time in the bath. I would also argue, though, like an extremely specific and kind of disquieting detective, that the bath in the TV show had a higher starting temperature. You can clearly see the clammy heat sheen (known to some humans as sweat??) still on Henry Cavill's face, whereas game Geralt's face is bone dry. Probably because most of him isn't even in the fucking bath.

Baths are often less refreshing than showers, but you can - and should! - still feel clean after getting out of a bath.

The Netflix show offers some more contextual information here, which is that TV show Geralt is gross. Jaskier and Yennifer both get at him for smelling really bad. His approach to hygiene is Henry Cavalier. Additionally, when Jaskier forces him to have a bath in episode 4, Jaskier is the one tipping water on Geralt, and even references rubbing camomile on his arse. Geralt is basically a tiny baby who cannot clean himself. Does he even wipe his arse? We cannot say for sure. 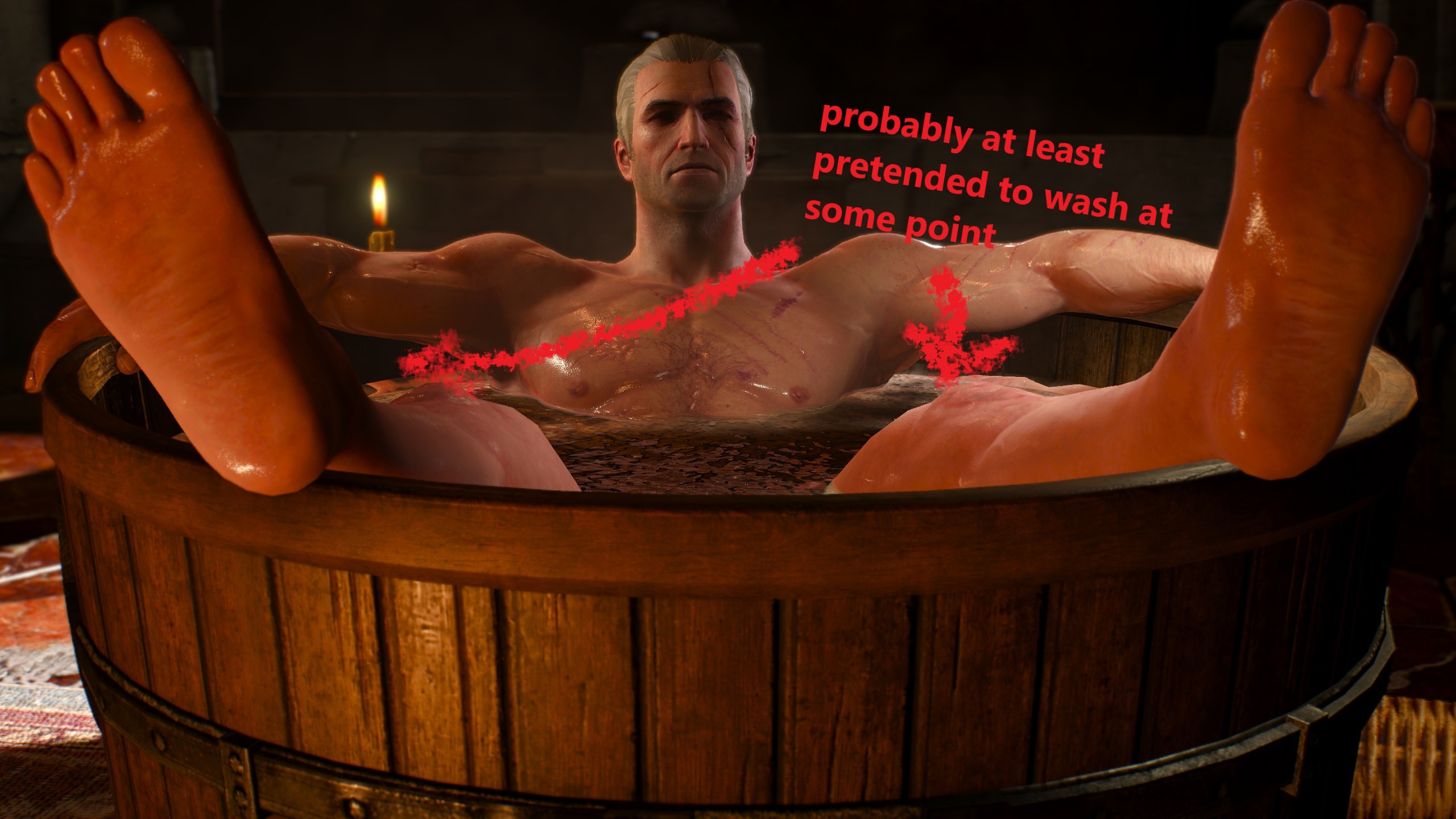 All this is to point out that, taken with the lack of visible product, it is highly unlikely that the bathtub Geralt of the TV show actually washed himself at all. The Witcher 3 Geralt doesn't get constant snarky comments about smelling like a horse, used some product in his bath, and also at one point in the scene rubs the bottom of one foot with the other foot. This indicates he's not averse to touching his own skin, and is at least familiar with the concept of cleaning himself.

You can enhance the atmosphere of your bath in many different ways. Candles, music, a glass of wine and a king size Lion bar: many avenues are open to you. The game Geralt has some candles, and is in a relaxed, playful mood. Yennifer sends a small lizard dragon thing towards his naked crotch, but it's a little joke between them and she's not doing anything overtly weird to him. Overall: a good atmos.

And then there is the TV show. 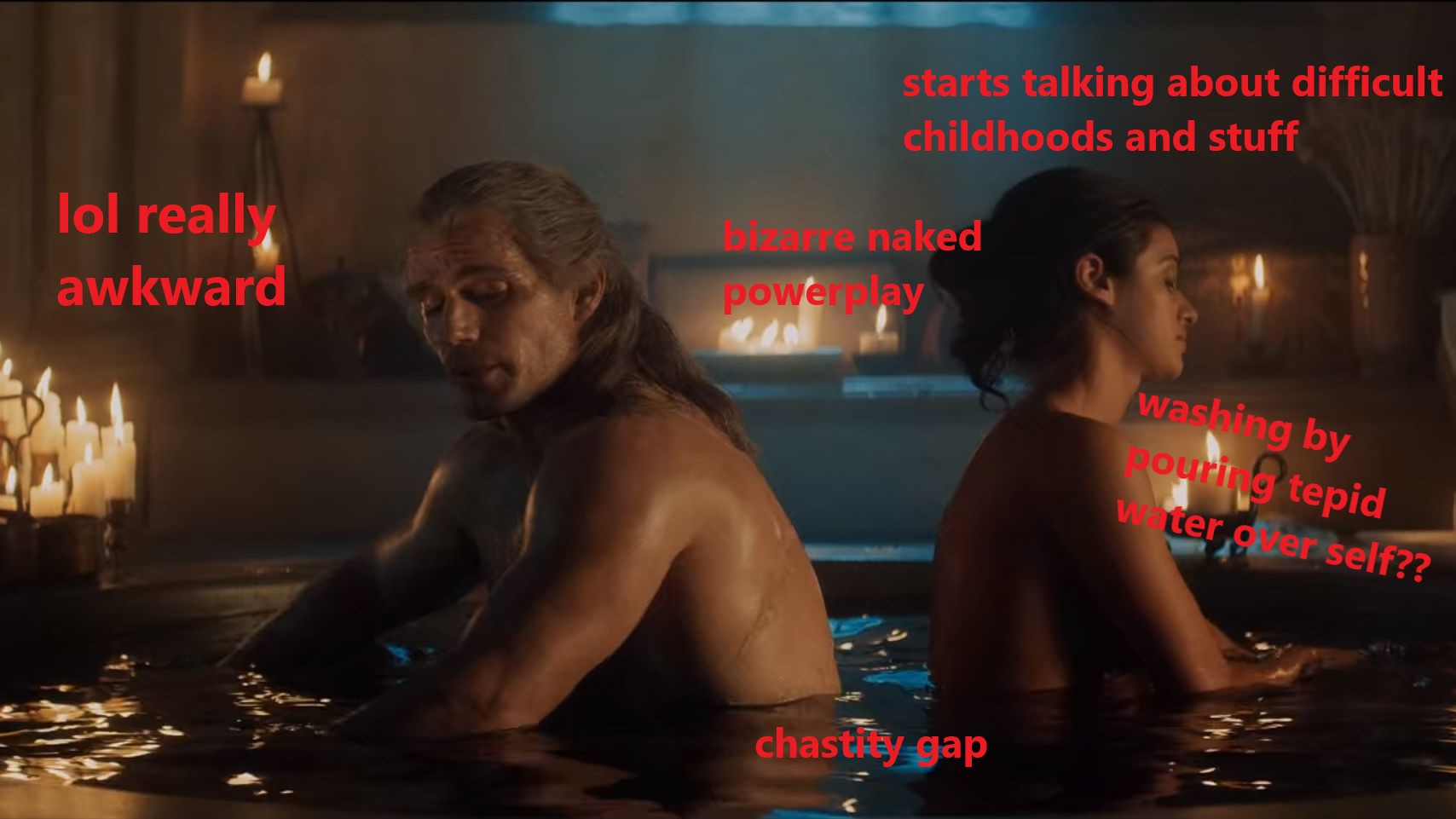 Comfort is, in some ways, dependent on the other BPSs. Here, The Witcher 3's bathtub Geralt has the edge in atmosphere, cleanliness, and heat retention, but the TV show pulls ahead in final temperature and, crucially, in overall size. It's worth noting that the bathtub in the TV show is a made-for-purpose bathtub, whereas the one in the game is designed to be a bathtub, sure, but could be used just as easily to store linen, or loads of milk. It also loses a lot of points for being made of wood, because ultimately getting splinters in your arse is probably the fastest way to ruin a bath.

This has been a very close fight, but I can exclusively reveal that the exclusive results (which are indisputable remember) are as follows:

So there you have it! The old veteran has been unseated by the young, hungry newcomer! Although it should be noted that both scores indicate these baths are average at best and I would encourage both Geralts to do put more effort in their tub time. Thank you, we will not be taking questions at this time.