Well, there we go: Fallout 76 is the answer you were looking for. Not Fallout 5, not Fallout 3 remastered, but 'Fallout 76', which on the face of things implies a sort Fallout 4.5, much like New Vegas was to FO3. It might not be that simple, however - more on which below.

'76' refers, it seems, both to the number of the Vault you'll start off in this time, and to the year 2076 (that being the year Vault 76 was built, and the year before the bombs dropped in the Falloutverse). I'm hoping it also proves an excuse to use more of a 70s than 50s aesthetic for this particular take on the end of the world, which may be backed up by the use of John Denver's '71 country classic, Take Me Home, Country Roads. That song's reference to West Virginia probably ain't no coinky-dink either.

Below: the trailer, and my best educated guesses about the timeline, setting, theme and release date of this new Fallout.

A trailer for you:

I can't see a reference to another studio being involved - going on both the video credits and this here Beth-o-tweet, it seems to be a Bethesda in-houser, busting hopes and expectations that Obsidian could be given it, as they were with nu-Fallout series high, New Vegas. But we pretty much already knew that.

Vault 76 has been mentioned before, in Fallout 3's DLC, as one of the "control" Vaults offering as baseline for comparison with the weirder Vault experiments, and which was due to automatically open twenty years after the bombs fell. (It also got a nod in Fallout 4, so this has perhaps been a long time coming). Clocks in the trailer yield a date of 2102, which would be 26 years after the construction of Vault 76, and place the events of this game around two centuries before those of Fallout 3 and 4 - and still a few decades before Fallout 1, even. Start your lore-speculation engines now, basically.

What else? Well, the video makes reference to a 'reclamation day' and 'our future begins', making me wonder if it's about a whole host of humans trying to re-start life on the outside world, as opposed to ye olde time-lost sole survivor deal. 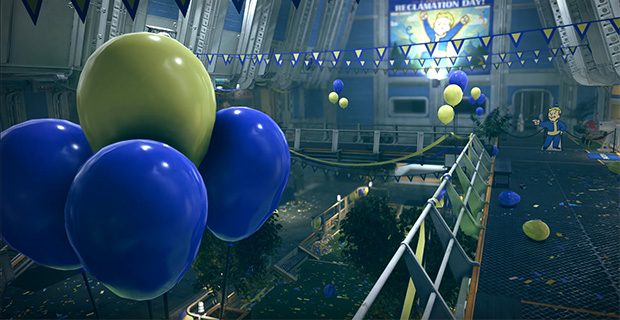 However, over on Kotaku, Jason Schreier's reporting he's heard whispering that this is some manner of online game, rather than necessarily the next main-line Fallout title. Given that, in real-world history, the year 1776 was when America declared its independence, putting two and two together to make 76, could that mean some sort of battle for control of a nuclear world and its few remaining resources?

Again, there's that 'our future begins' refrain - also used on the Bethesda Twitter account - this could well concern the birth of a new, radioactive nation.

The whole two hundred years previously thing also gives it plenty of space to do whatever it wants without upsetting the lore of Fallouts 3 and 4. It could also mean a little less totally wrecked'n'ruined scenery, depending on how close West Virginia (if that is indeed the setting) was to an explosion epicentre.

Me, what I hope for most from a new Fallout is more decision-making and less wanton killing. But we shall see, and we shall see at E3. Oh, and the other date on the clock in the trailer? October 27. How much should we read into that, eh?