With a recent press event where people got their first chance to play Far Cry New Dawn, it only seemed fitting to put this into our roundup for the game. It seems to be more experimental, with RPG system being included for the first time. In this guide, we'll go over everything we know, from the release date, to the trailers and the editions of the game that are available. 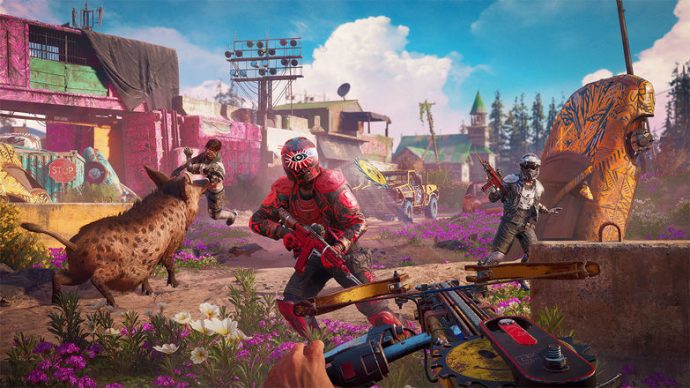 Though it was announced recently, it seems that Far Cry: New Dawn's release date is actually very soon. Far Cry: New Dawn will be released on 15th February 2019 and it will be coming to PC via Steam and via Ubisoft's store/Uplay. Ubisoft have also noted that if you finish Far Cry 5 before starting Far Cry: New Dawn, you'll get some goodies to take into the new post-apocalypse.

Recently our very own Matthew Castle spent a lot of time with Far Cry New Dawn, pointing out ways he thinks the game improves over what Far Cry 5 brought to the table. The game seems to be going down the same RPG route that one of Ubisoft's other big money-makers - Assassin's Creed - has gone in recent years. There's also a boar friend called Horatio. He's a sweetheart to you, but a terror to your enemies, goring them with his magnificent tusks. That'll do pig, that'll do.

New Dawn continues where the "good" ending of Far Cry 5 left off, so if you haven't played Far Cry 5 and don't want anything spoiled, well Ubisoft kinda did that already with the trailer and the mere premise of this game. Below are more details of exactly what happened, so skip the following paragraph if you don't want to know the specifics.

Essentially what happened is that Joseph Seed - the main bad guy of Far Cry 5 was predicting a nuclear apocalypse. In a strange and twisted way, his prophecy came true as you arrested him for inciting his cultists to violence. In order to escape the blast, you drove to the bunker from the beginning of the game and were captured by Joseph Seed. The fact that he appears in some of the game's marketing material implies that this is a continuation of the story, showing what happened to the world above when Joseph and his deputy emerged from the bunker, seventeen years later.

As for the game itself, expect for there to be more of the same from Far Cry 5 - in that it can be played with two players in co-op, the ability to recruit people or animals to fight by your side, weapon and vehicle crafting, and driving around the vast open world. You're not limited to Hope County either, as you'll also be able to venture into wetlands, canyons, and coastal regions via expeditions.

From the trailer, there's also a hint at racing in tracks that resemble the gladiatorial arenas that Mad Max: Thunderdome made infamous, as well as some heavily mutated fauna that you need to watch out for when exploring Hope County. New weapons include a saw-blade launcher that is as devastating as it is silly. There's also a sweet "doge" that can actually get into cars with you (rather than run awkwardly after you like in Far Cry 5), who you can guarantee I'd have with me at all times. 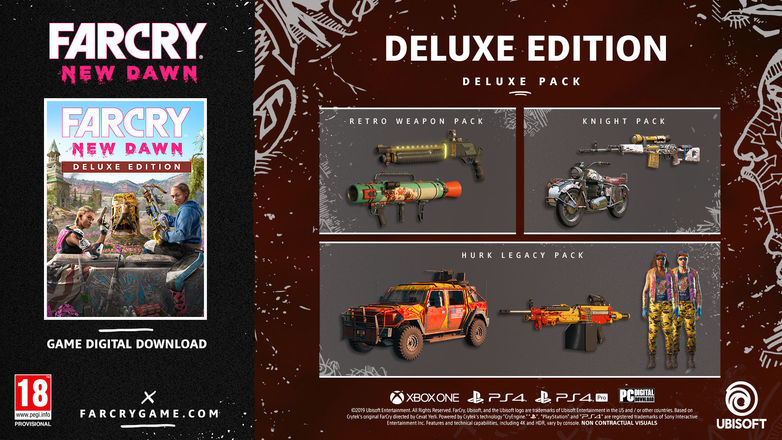 The usual caveat applies to pre-ordering video games, in that I wouldn't recommend doing so, but I'd be missing information if I didn't include it. There is a pre-order bonus for Far Cry: New Dawn, which is a "Unicorn Trike". It's a neon monstrosity.

That's all we have at the moment about Ubisoft's foray into a more post-apocalyptic universe that may be stealing a bit of Rage 2's thunder, but do check back over the coming months until the release date as we will be updating this with any details that are announced over that time period.