It's been a long time since I've been excited by a video game cutscene. I've never been the type of person who itches to hit the skip button whenever I get pulled into a pre-rendered sequence, but I do often find them to be a rather passive experience and I'm usually quite glad when they finally come to an end. In fact, I think the last time I was properly wowed by a cutscene was when I played Final Fantasy VIII back when I was all of 11-years-old. Obviously, the jump in quality from blocky old Squall to its fully 3D rendered action sequences was more than enough to get my pulse racing back then, but even recent Final Fantasy games have failed to elicit the same kind of reaction.

This article was originally exclusively available to RPS supporters, but we've brought it back From The Archive for all to read to celebrate it finally coming to PC on December 16th 2021. This article was first published on May 6th 2020.

You can get more articles like it, alongside an ad-free version of the site, by becoming a supporter today.

Until, that is, Final Fantasy VII Remake, because holy moly does this game have incredible cutscenes. I actually let out a genuine GASP at one point, and more than a couple of "CORs" and "OOOOFs" too, which is probably the strongest reaction I've had to an in-game cutscene for, well, practically 20 years.

There are several great moments in Final Fantasy VII Remake, but none top this exquisite escape scene out of the Shinra building. In the moments before, you've played as Barret and Aerith, fighting a giant mechanical spider mech as you flee for your lives. You finally arrive in the main foyer with the end in sight, but then Heidegger, king smug man himself, surrounds you with dozens of his goons. It looks like the end of the line, but then you hear a faint rumble. It gets louder and louder, and BOSH, Cloud comes roaring in on his motorcycle with Tifa in hot pursuit in a Shinra van.

Now it's an even fight, and what follows is this glorious chefkiss.gif bit of cinema.

That, my friends, is poetry in motion. The slow motion sword pivot, the pixel-perfect framing, the plunging zoom on Heidegger's butthead face inches away from the spinning rubber of Cloud's bike... Sweet Shiva, that's the good stuff. 20 seconds of pure, unadulterated bliss.

And Barret even gets in a joke right at the end. What a game.

In fact, that whole chapter in the Shinra building has some pretty thrilling moments truth be told. Part of the reason why Cloud and Tifa are otherwise engaged, you see, is because your boy's doing battle with Shinra Jr up in his dad's penthouse office suite. At first, it looks as though Tifa has escaped with Barret and the others, but just as Rufus' Turks crew arrive in their helicopter and smash up your helipad battleground, Tifa races back into view, power-sliding down the crumbling rubble to grab Cloud's hand just before he plummets to his doom.

I, mean, I've always been a bit of a Tifa fangirl and a bit of an Aerith-basher if I'm honest, but MAN ALIVE, Tifa is just so damn cool in this game and I'm sorry Matthew but she's actually my new girl crush. 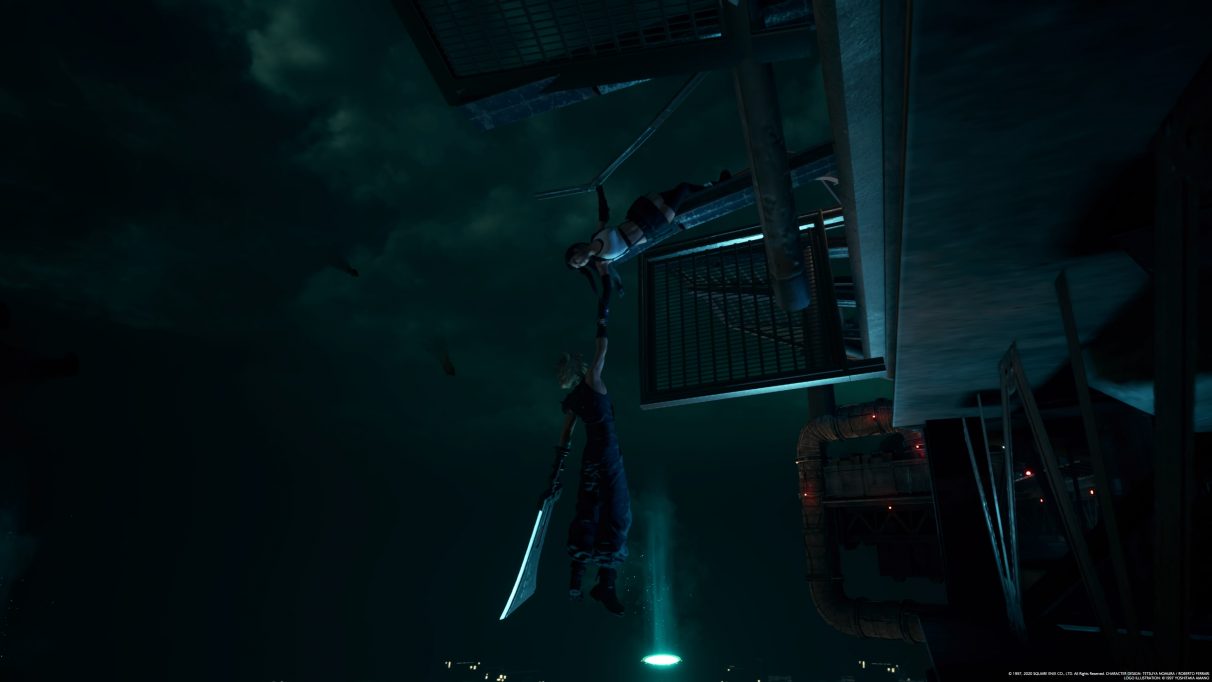 Just look at the framing on that. It actually gives me goosebumps just looking at it. WHAT. A. GAME.

It's scenes like this that actually make me hopeful about what's to come in Final Fantasy VII Remake. Sure, the sidequests in this first instalment are universally awful and yes, the ending does indeed go 100% off the rails after this Shinra chapter, but my nose would also be longer than Cloud's sword if I said I didn't feel all my earlier gripes about the game instantly evaporate the moment I saw Tifa henching it across those steel girders and clasping Cloud's tiny wrist in a state of sublime suspension.

So even if Square Enix do decide to take the game in a mad direction (which they almost certainly will given the way things end here), at least it's going to be one hell of a ride either way. They may not have shown much evidence of their newfound cutscene brilliance in the mainline series of Final Fantasy games in recent years, but if Remake Part II can quicken the pulse nearly half as much as Part I, then I am absolutely there for it.