After making a strong impression with their pair of Streak mechanical keyboards and lightweight, symmetrical Flick 2 mouse, Fnatic are rounding out their second gen peripheral line-up with the decidedly right-handed gaming mouse, the Clutch 2. Featuring the same Pixart 3360 sensor, Omron switches and more or less all the same specs as its Flick sibling, is this one better gaming mouse material? Let's find out.

It's a fraction thinner than the Flick 2, shaving 4mm off its overall width, but what it saves in overall girth is made up for in height. The Clutch 2 may only be 3mm taller than its Flick sibling, but it instantly feels bigger under the palm, especially if you have a more relaxed grip like me and tend to rest your entire wrist on the mouse mat behind it.

On the whole, though, the Clutch 2 is still a very comfortable mouse to use both day-to-day and for playing games. Despite its bulkier build, everything feels within perfect reach, from its scroll wheel to its pair of prominent side buttons. Indeed, apart from its overall shape, the Clutch 2 shares many of the same characteristics as the second gen Flick, including its RGB lighting on the scroll wheel and Fnatic logo along the inner corner, its central DPI button and its three little white LEDs signalling which of the Clutch's memory profiles you currently have active.

You also get the same shade of Fnatic orange worming its way round the mouse's lower edge and underbelly, but its more overt curves and sculpted chassis make it a lot less obvious when you're peering down at it on from your desk. Not a major loss, all told, but it does mean it's ever so slightly less interesting to look at compared to the Flick 2. Still, when you've got your hand clamped round it, none of that stuff really matters, does it? 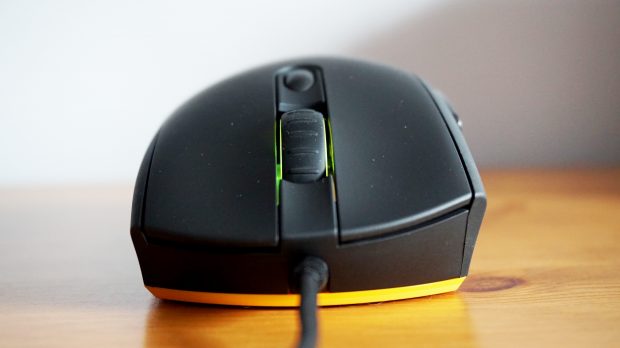 You'll probably still need to make a few adjustments to the Clutch 2 when you get it out of the box, though, as its default DPI (or sensitivity) settings are definitely a bit on the low side for general mouse work. 400, 800 and 1000 DPI may be fine for some people to start jumping straight into games, but I tend to prefer something around the 1600 mark.

Much like the Flick 2, the Clutch 2 can technically go all the way up to an impossibly fast 12000 DPI if you've got laser vision and happen to experience time in slow motion every time you look at a computer screen, but no one in their right mind will ever need to go to that extreme.

Whatever DPI you end up using, though, I'd highly recommend using Fnatic's OP software do make those adjustments rather than the mouse itself. Yes, everyone hates dedicated peripheral software, but when the latter involves holding down the two side buttons and central DPI button for five seconds and then using the scroll wheel to go up and down in 100 DPI increments, it's a recipe for disaster. It works, but when you're old and your memory's slightly decrepit like mine, a quick slip of an overeager finger can send the entire adjustment process into disarray, as there's no way of telling what DPI you're currently on or how much you've changed it by. 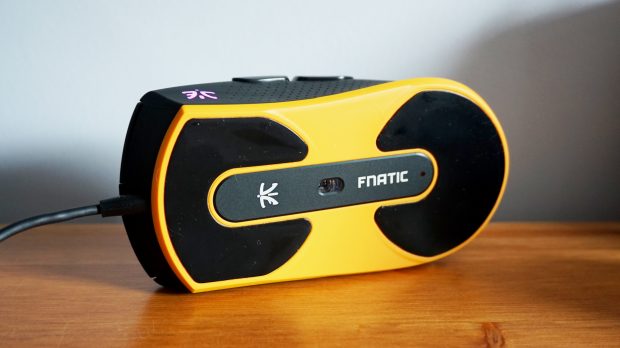 Personally, I much prefer having some concrete numbers in front of my face when I'm making these kinds of adjustments, especially when the Clutch 2 offers such intricate levels of fine-tuning. As I mentioned in my Flick 2 review, OP's UI doesn't exactly do a great job at explaining what the Clutch 2 can do, but as well as adjusting the mouse's general DPI settings, you can also set it to have one DPI speed for horizontal sweeps and another, completely different one for moving the mouse vertically - just like the Flick 2.

Admittedly, this kind of setup doesn't exactly lend itself well to a healthy work-based relationship with your mouse, but FPS fans could potentially use something like this to quickly scan the map from side to side while still retaining that fine, creeping motor control when raising their sniper sights up and down, for example.

Personally, I'd rather be the one in control of changing my DPI with something like the Asus ROG Gladius II's little on-the-fly thumb button than have it at two fixed speeds for an entire match, but I guess that's why you've got extra profiles so you can switch things up mid-game. Thankfully, reaching the Clutch 2's central DPI button is fairly hassle-free, as even my stiff, brittle fingers could get to it without much effort or contorted hand gymnastics. 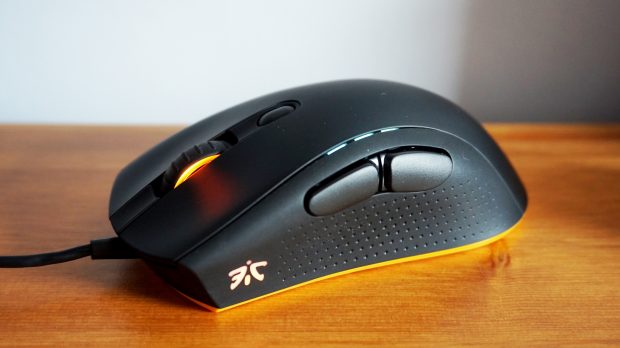 OP isn't just for changing the Clutch 2's DPI settings, of course, as you can also use it to adjust its RGB lighting (or turn it off altogether, if you prefer), and change its various button bindings. The side buttons do the usual back and forth web browsing-based clickage out of the box, but you can also use these to activate macros (albeit only ones you've recorded using Fnatic's Streak keyboards), launch applications and open files or links. Or, if you simply want to swap one button for another, you can use the remapping tool for easy reassignment.

Much like the Flick 2, you can also change the Clutch 2's polling rate (how often your mouse communicates with your PC) from 250Hz up to 1000Hz, and its lift-off distance can be raised from 2mm to 3mm, just to give you a little bit of extra reassurance when shunting it quickly across your mouse mat.

Really, though, there isn't much to distinguish the Clutch and Flick 2s other than their overall shape. They both do exactly the same things and share all the same features, and they even cost the same amount of money, too - $60 in the US, with UK pricing to be confirmed shortly. As I mentioned above, I think I'd prefer to spend a bit more and get something like the Asus Gladius II  (£70 in the UK and $95 in the US) if I wanted really fine-tuned DPI controls, but for those that want something a little bit more upmarket than something like the £30 / $40-odd Steelseries Rival 110 or £40 / $45-ish HyperX Pulsefire FPS, then either Clutch or Flick the Second should serve you perfectly well.