If you click on a link and make a purchase we may receive a small commission. Read our editorial policy.
Premature Evaluation is the weekly column in which Steve Hogarty explores the wilds of early access. This week, he's shuffling cards in the inky void of space in For The Warp.

Early access deck builder For The Warp doesn’t so much wear its FTL influences on its sleeve, as it does creep into FTL’s bedroom when it’s out to try on FTL’s lipstick and stare dead-eyed into a vanity mirror while muttering “I’m a very pretty spacefaring roguelike, yes I am”. If FTL ever goes missing while out for a late night jog, odds are that For The Warp has it trapped at the bottom of a big hole and is forcing it to moisturise. There is imitation, and then there is wearing the skin of the game you love and slow-dancing alone in your basement illuminated only by a low-hanging, buzzing incandescent bulb.

So, in For The Warp you’re piloting a spaceship from warp-hole to warp-hole, navigating pirate-infested space and encountering randomly generated scenarios along the way, while managing your limited fuel reserves, bank balance and hull integrity as you go. Each jump depletes your remaining fuel by one precious unit, encouraging you to willingly charge into battles to shore up your resources or to find a safe route to a trading platform in order to fill up your dwindling tank. Distress beacons lure you off course with the promise of gambling your ship’s welfare on some neat rewards, like rare equipment or the cash required to buy new cards for your deck. 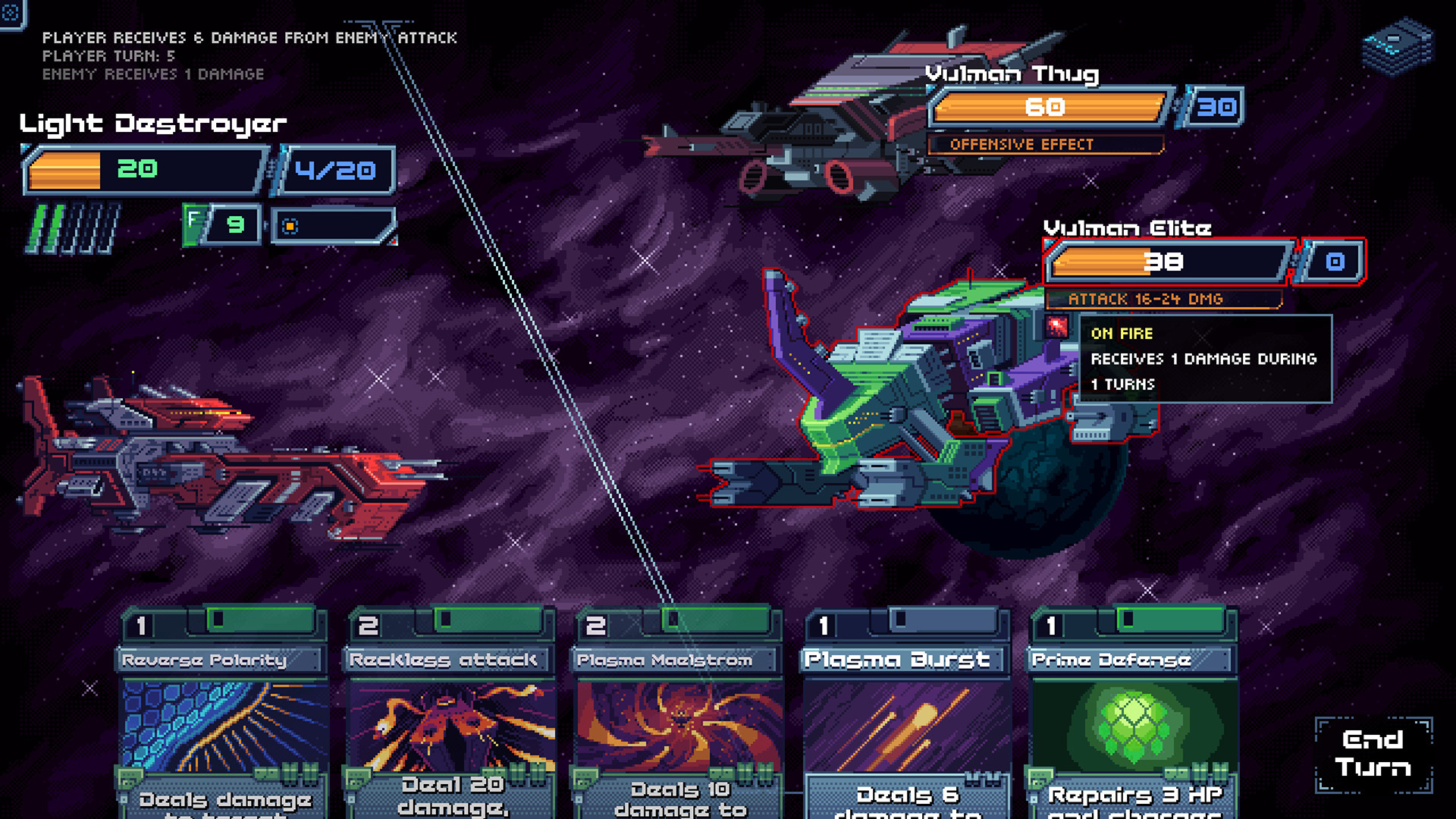 Yes, cards. Because while the top-level game is cut from the same space-cloth as FTL, the combat itself departs entirely from the real-time crew management and ship subsystems of that game. Instead you play cards from your hand to perform a series of actions per turn, building up your shield’s defences, attacking with guns and lasers and missiles, launching attack drones or boosting the number of action points available to you next turn, at which point your hand is discarded and you draw again. Cards are all dressed up in genre-appropriate flavour text, so “evasive maneuvers” will halve the damage you take in the next turn, and “reverse polarity” will deal damage equal to your current shield level. You’re aware of how fiction works – it’s just cards, but with cool space-sounding words on them so you can pretend you’re in an episode of Battlestar Galactica.

If you’ve played similar deck-building dungeon crawlers, most relevantly Slay The Spire, then you’ll find your turgid deja vu gland will be quivering away contentedly here. Enemy ships are polite enough to telegraph their next move, whether that be attacking you for a number of hitpoints within a given range, bolstering their shields or doing whatever the equivalent of magic spells are in space: jamming your circuits to reduce your action points, or hacking your terminals to remove a card from your hand. 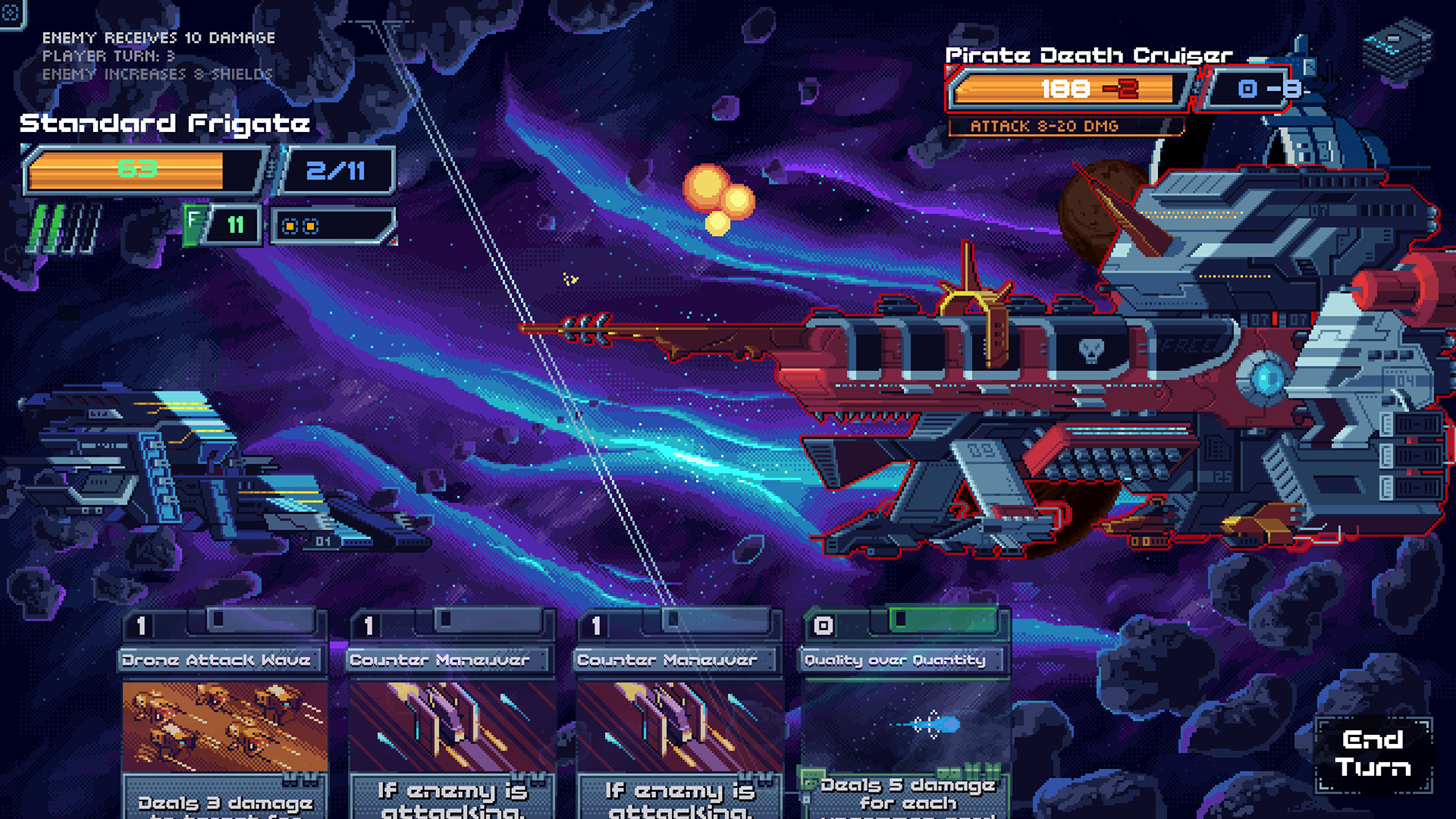 Knowing what’s about to happen in the next turn gives you the strategic elbow room to decide how best to play your hand, using gaps in combat as an opportunity to increase your defences or siphon fuel from opponents, or countering imminent attacks with cards that increase in strength when used against ships that are charging their weapons.

As pleasant as this all is, the super-limited number of cards available in this early access version restricts the amount of serious strategising you can do, and you’ll exhaust most of your options within half a dozen plays. My most interesting runs were based around a deck piled high with cards that boosted my ship’s shields, complemented by a few attack cards whose damage was based entirely on how powered up my shields were. In this manner I could tumble through systems like some kind of impenetrable space tortoise, crashing wildly through everything that crossed my path, but besides that one peculiar defensive build there aren’t yet many other ways to drastically change up how each run plays out. 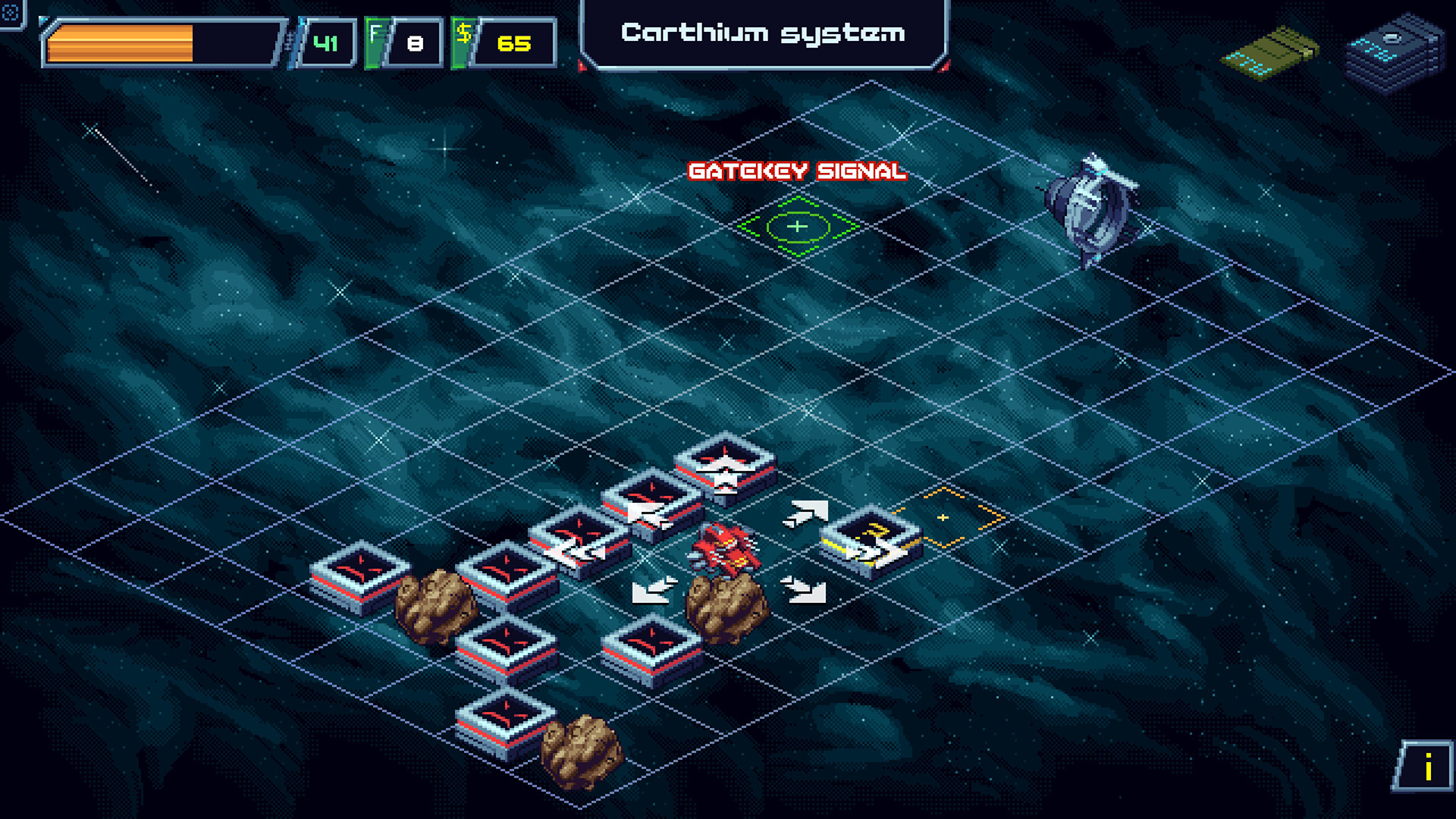 Further betraying the lack of actual stuff in the game are encounters that very quickly repeat themselves. Every planet has a hailing colony in desperate need of a delivery driver. Every temple ruin contains the same hidden treasure. Where FTL feels like a daring voyage into the unknown with each new attempt, the barebones systems of For The Warp feel like revisiting the same handful of tiles over and over again until you become bored enough to give up. This is a skeleton of a game – but not the fun dancing kind – it’s a framework in need of a few hundred more cards and things like giant space worms, factions, equipment and variety before it could reasonably hold anyone’s interest for more than an hour or so.

Which is a shame, because I do enjoy the endearing pixel-art graphics and lovely synth-pop soundtrack, which is a real jam during boss battles. The cards look like cute little floppy disks, with really pleasing clackety sliding parts that pop up when you mouse over them. Enemy ships explode in a satisfying animation, sending bits of debris cartwheeling through space. The style is all here, but the substance is following far, far behind. For The Warp is a deck-building roguelike with a real dearth of cards to play with. It needs to go back into hypersleep, to fatten up on a diet of intravenous space-porridge before it’s worth dipping into.