If you click on a link and make a purchase we may receive a small commission. Read our editorial policy.
Developer: HopFrog
Publisher: Humble Bundle

This is a public service announcement: if you find yourself on the western edge of the Llŷn Peninsula in Wales anytime soon on the hunt for blackberries, don’t bother - I’ve picked them all. Turns out there’s a twofold satisfaction to foraging that makes it difficult to stop. First there’s the search: looking high and low for collectibles, pushing your body further into the thicket, gently squeezing the fruit to test whether it’s ready. Then there’s the count: two foragers competing to fill their tupperware boxes to the top with ripe goods. Does the berry belong to the spotter, or the forager who could reach it? The debate ends only when there are no berries left to argue over.

Forager, the game, knows the lure of both the search and the count, and is built to exploit both. It blends together idle game mechanics with active exploration, farming, crafting and combat, and has a dangerous advantage over the Welsh coast: everything in Forager grows back fast. Not just the plants, but the cows, the gold deposits, and the gravestones that house the living dead - all renewed within a matter of minutes. 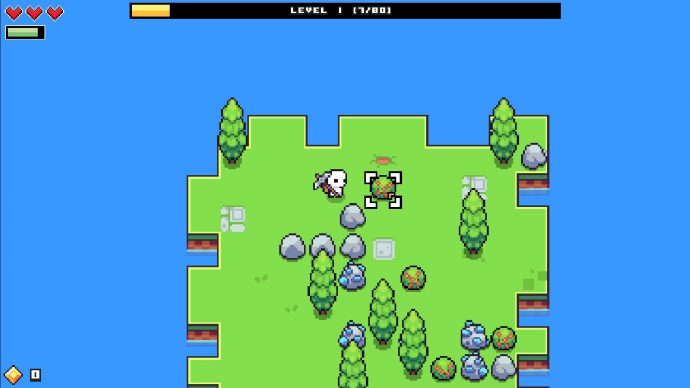 Even on those occasions when the land is momentarily barren, you can simply create more land - buying it into existence, like when your dad got everyone moon plots for their birthdays in 2002. Only these are lands you can actually visit, building tiny bridges with a click and venturing outwards from your central starting island. And they’re covered in stuff. Forager’s world is a wellspring of everything.

Where does the everything go? Into the furnace, or onto the anvil, or through the sewing machine. Your next goal is always to make something that will help you harvest faster, or longer, or more efficiently. Your energy meter governs how much you can swing your pickaxe before damaging yourself, but it’s not refilled with rest - rather by gorging yourself on fruit or fish. The rhythm is relentless, but not tiring. It’s hypnotic. 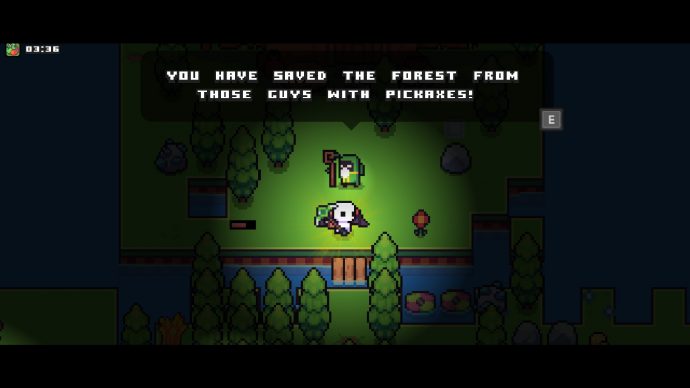 You click a lot. You click on trees to avail them of their wood, bushes to rid them of their berries, and slimes to part them from their current plane of existence. Sometimes you press E instead - but only when the option to click is already taken up by another action. Forager’s mission is to combine the compulsive zen of idle games with the pastoral serenity of Stardew Valley to find something like clicker nirvana, and it gets pretty close.

The game opens in a window by default, half the size of your screen, which tells you something about the way it’s intended to be played. Everything about Forager encourages you to have something else on the go. There’s no pause button because there’s simply no need. Enemies move predictably and stick to their territories, literally in the case of the slimes. And halting your machines while you’re absorbed in an activity outside the game would be a mistake, since this world turns perfectly well without you. 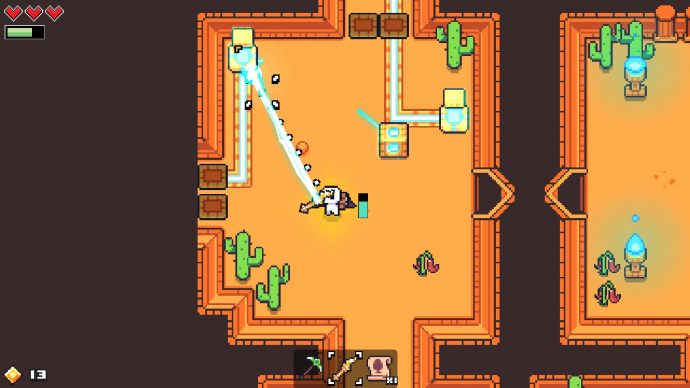 As I write, I can hear trees flumping upwards into existence, a sound like a pillow being shaken out. When I open up the game again, a new forest will be waiting to be chopped down, my fish traps will be full, and the gold ingots will be piling up. I’ve been well off ever since I started minting my own coins, an idea that I’m fairly sure breaks the economy in some fundamental way, but hey - economies break every ten years or so anyway, right? I’ve built a row of banks that burp out money faster than I can pull my smelting gloves on, which is handy if you’re in the business of buying islands.

Like many other clicker games, Forager encourages you to pursue a state of perfect automation - delegating the menial clicks to the machines so that you can spend more time clicking on the important things in life. Those things tend to emerge from new islands, which are small enough to have a singular focal point: a person, puzzle, or dungeon. To the west, the skull maze hides precious gems, but also bleached-white monsters. In the green south, a family of giant beetroots tell me that I’m amazing and that they love me. To the north, where lavender sprouts through the ice, a man in a fox skin hood needs 500 animal stools, and quickly. Too quickly to explain why, apparently. 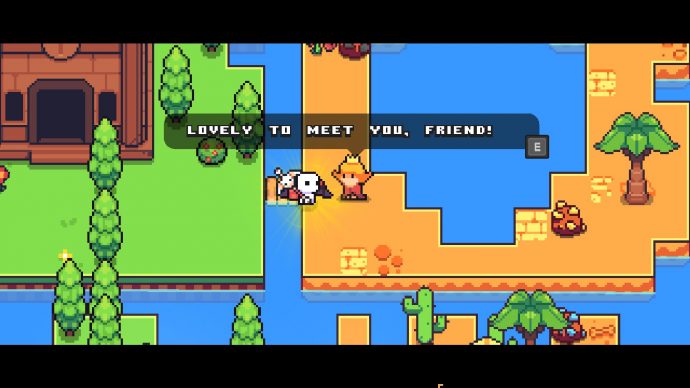 These simple, gentle stories give you objectives beyond your next wallet - which you should definitely craft, by the way, because they double the value of your coins - and provide the closest thing Forager has to an endgame. Even after you’ve exhausted all the potential uses of hot peppers in embroidery, you’ll be donating them to the local museum of farming, archeology, and alchemy for distant and mysterious rewards. Forager becomes enjoyably daft in these latter stages, too - my once humble berry-picker now wears vampyr wings and carries a thunder rod that fires a searing beam across the lands, melting trees and slimes alike. The outer reaches of the skill tree promise power plants, droids, and EMP grenades, as the search for greater tools of optimisation tips over into science fiction.

If this disregard for coherent worldbuilding makes Forager sound trivial to you, then you ought to trust that instinct. This is a game designed to be a diversion, rather than challenging in any mechanical or thematic way. There’s no sense of purpose to cling onto beyond the tap-tap of the pickaxe and the plink of coin arriving in your inventory. But that’s the clicker genre, a naked celebration of progression for its own sake. There’s an admirable lack of pretension in that, and you’ll probably already know whether it’s for you or not. 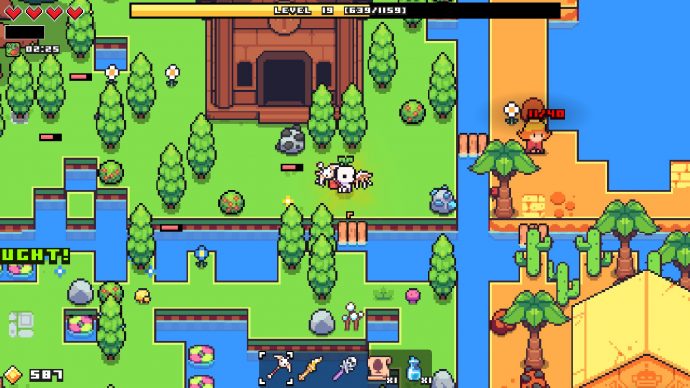 Forager’s exit button is buried in its menus, and that’s perhaps because it’s not really intended to be closed at all - merely minimised, and returned to in odd moments over a handful of days until you’ve maxed everything out. Personally, I’m looking forward to seeing the pairings people come up with for it over the coming weeks and months. Forager with Queer Eye, Forager with Terrace House. Forager with cheese, or wine, or a healthy whine to a mate over the phone. If you prefer your pleasures somewhere on the periphery of your attention, you’ll find there are plenty to pluck off the branch here.