Despite being someone who takes a whole day just to put up a shelf, I’m more of a builder than a fighter. That’s a problem in Fortnite Battle Royale, where forts don’t get much of a look in. The fleeting 50 vs. 50 mode scratched my itch for building citadels but has since left a conspicuous gap. It’s one I’ve spent the last few days attempting to fill.

In squads, duos and solo, building is reactive. If you’re out in the open and someone starts shooting, you can throw down some walls and a ramp so you can peek out. Maybe you want to scale a cliff, so you plonk down some platforms and stairs. The pace and shrinking play area suggests that there isn’t room for more, but I wanted to see for myself. 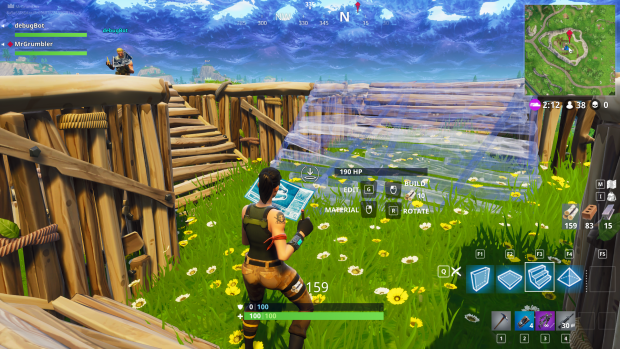 Having played Fortnite for more than five minutes, I was already pretty certain that spending the majority of a match faffing around with miniature fortresses was not going to be the easiest path to victory. I was more concerned with seeing if there were any benefits at all and, more importantly, if swapping manhunting for masonry would actually be fun.

Solo was out straight away. I’d have nobody to watch my back while I was building, and who builds fortresses on their own anyhow? It’s a bonding activity for pals. I jumped in with a partner and without a plan. At random we picked the hill west of Fatal Fields as our landing zone and, luckily, nobody else joined us. We had a large house, a couple of vehicles and plenty of junk, all waiting to be devoured by our pickaxes. The circle of doom appeared, with us safely inside it, giving us plenty of time to demolish absolutely everything in sight, from roof to floor.

Inventories overflowing with resources, we started building our fort. What we actually created was more of a random assortment of walls, floors and stairs that, when looked at from some angles, occasionally resembled something like an upside down house. We were lost in a discussion about rebuilding it when one of the walls shattered into splinters, quickly followed by our skulls. 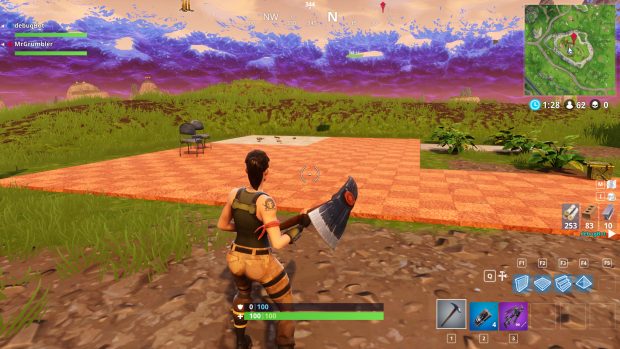 The next few attempts were even worse, as we either died while hoofing it towards the circle or in fights over resources, but I was still feeling optimistic when we entered the party bus once again. We landed at Fatal Fields and moved west - after looting the place - to get inside the circle. We had a plan this time, or at least roles. One of us would build and one would be the lookout. We'd sacrifice building speed, but we’d have a more orderly fort and wouldn't be surprised again.

To ensure that we could see potential threats in all directions, we started with a tower. Nobody showed up and the construction continued, right up until I ran out of materials. I had no time to find more before the circle shrank and we found ourselves outside it. We'd gotten no use out of the fort and already we had to move on. Swearing commenced, followed by frantic searching of the map for a new destination.

We were getting ready to roll out when all hell broke loose. The fort exploded, my buddy was taken out immediately and enemies dropped in from above, through the smoke. It was more Rainbow Six than Fortnite. In a blind panic I leaped out of the tower’s husk and fled down a hill, offering a half-hearted apology - between yelling - to the ally I was leaving behind. I was shot in the back seconds later. Dying afforded me a chance to see what had happened as the other duo explored the ruins. Our killers had built stairs all the way up to the top of the tower, which is how they got above us before completely demolishing our beloved home. We had no idea they were even out there, and no, I’m not feeling great about having to admit that. 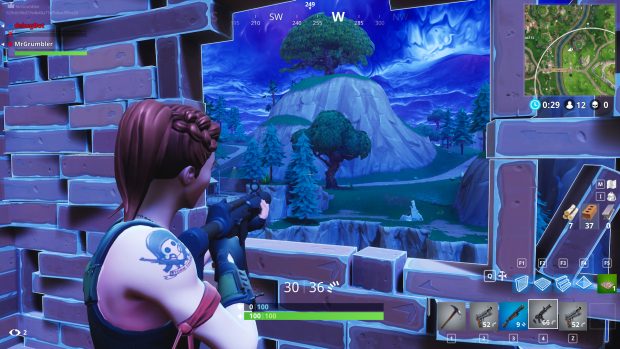 Even without rockets, wooden walls are easy to destroy. For our fort to actually protect us, we needed stronger materials. And to save time and make the most out of our bricks and metal, we'd also need to make smaller forts with just enough space for us to cower inside. From the lobby, we planned.

I was on my own after an early shootout went awry and I lost my partner. All of our planning had been pointless and I was just focused on surviving. I wasn’t armed and had few resources, so building a tower on a cliff was probably not the greatest idea I’ve ever had. Some nearby trees and walls gave me enough to make a ramshackle little outpost where I could spot anyone trying to sneak up on me, and I settled in.

Through this, my dead partner was watching me, but another spectator joined us as well. I must have made for dull viewing; a poorly-armed dude running around chopping down trees and building an ugly tower in the middle of nowhere. There were definitely exciting things happening elsewhere, judging by all the names of the dead, but not on this nondescript plot of land where I'd decided to plant my flag. They stopped watching. 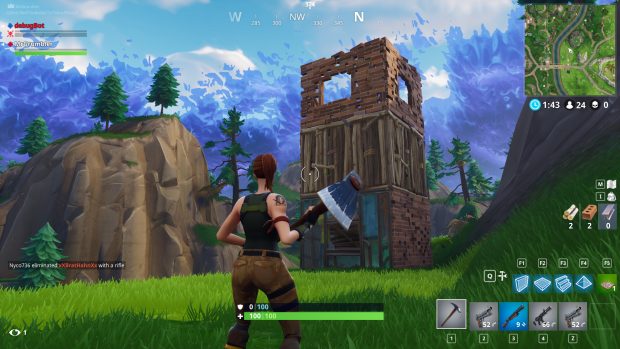 I heard the rockets long before I could see anyone. They weren’t aimed at me, but the noise was close enough that I knew I was going to be a target before long. A duo came around the corner, but I was ready for them and sent them packing. Unfortunately, neither of them had the rocket launcher. My tower exploded as it was attacked from the rear; my rocket-packing foe had got the drop on me. Yet again I found myself leaping out of a ruin, but I wasn’t able to outrun the rocket on my tail.

Despite the fact I didn't manage to put up much of a fight, that proved to be my most successful fort-building match. I got into the last few duos, and a minute after my death the game was over. I didn’t actually do anything, of course. I just found somewhere out of the way, spent the game building a rubbish tower and then watched it get blown to smithereens in seconds.

The mood of our less-than-dynamic duo took a turn after that. Fortnite was constantly showing us why nobody builds forts. All the time we spent gathering and building was time we weren’t rummaging around for guns, leaving us massively underpowered. By building a fort we were also announcing our location to everyone in the area, and the forts themselves offered scant protection against rockets. And only on a couple of lucky occasions did we actually build a fort in a location that remained within the circle for long enough to make it worthwhile. There isn’t a single benefit to building a fort that you can’t get by simply dropping down a couple of walls when you start taking fire. 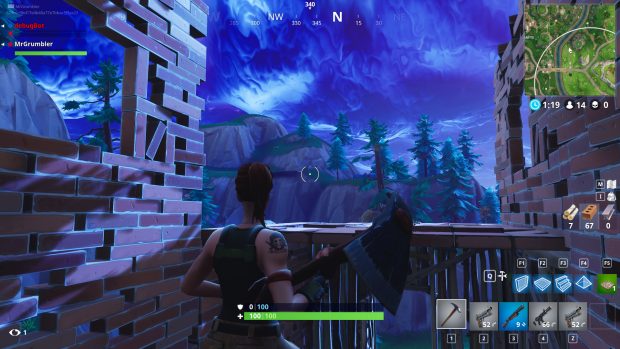 I wasn’t really expecting there to be, though I’d hoped that playing unconventionally and exchanging my gun for a pickaxe might be at least a fun diversion. It absolutely isn’t. Avoiding firefights and chopping down trees instead is dreary work, and there’s neither the time nor the tools to create anything particularly stalwart or elaborate. And with most fights only involving a handful of people, there aren’t any exciting sieges to look forward to at the end.

So nothing I’ve done has been able to even come close to filling the gap left by 50 vs. 50. It’s made me more convinced than ever that Fortnite needs a permanent siege mode, though. There’s this whole system that barely has any purpose, but it could be Fortnite’s biggest hook. Sure, the game’s more popular than breathing right now, but soon we’ll be drowning in battle royales and clamouring for something more.