There were 30 of us left, down from the 50 we had at the start of Fortnite Battle Royale’s 50 vs. 50 mode. Almost all of us had managed to home in on the new safe zone before the circle closed in. We got to work immediately, silently intuiting what was needed. Walls. Many, many walls. And some elevation -- stairs, in a pinch -- that would let us see over the trees, and see the other team charging towards us. They came from every direction, announcing themselves with furious gunfire and a barrage of rockets.

Our makeshift fort changed as we needed it to. A new wall here. Some shelter to heal a downed teammate. A bit of cover for people to reload behind. I ducked and narrowly avoided coming face to face with a rocket, but then the wall behind me came down and bullets started to fly towards me. Seconds later and I was brought back into the fight by one of the players who had become a dedicated medic. The siege continued.

Fortnite’s never been this good before. 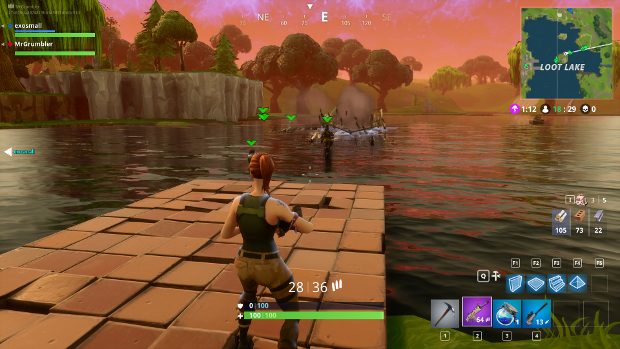 Since Epic kicked off the early access phase (you can read what Brendan thought of it in his Fortnite Premature Evaluation), Fortnite has lacked a clarity of purpose. It is Frankenstein’s monster of free-to-play games, awkwardly constructed from five years of disparate game design ideas. The Battle Royale mode is less confused, but it doesn't do as much to differentiate itself from Playerunknown’s Battlegrounds, despite the fort conceit. By splitting players into two teams of 50 players however, Epic’s finally made something that feels not just new, it's also cohesive.

The thing that should set the Battle Royale mode apart from the likes of Plunkbat or H1Z1, building stuff, is normally barely present. When you’ve got countless teams and individuals all gunning for you, a constantly shrinking play area and only ever a handful of teammates, there’s simply not enough time to fortify. But when you’ve got 49 teammates helping you out, suddenly those obstacles just fall away. 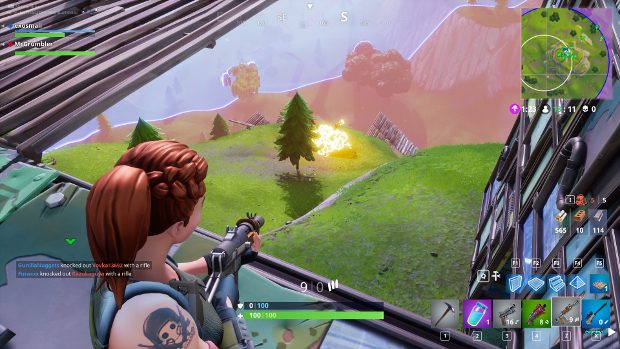 Game trailers, particularly those absent actual gameplay footage, don’t often accurately reflect the games they're plugging, but as a friend noted when we played our first game, the 50 vs. 50 announcement trailer depicts almost exactly what I described above. It promises a lot and posits a mode where people actually work together even when they’re just flung together by fate and matchmaking. It’s the sort of best case scenario that I didn’t expect to see very much of, but I’ve yet to play a full game -- one where I didn’t die in five minutes -- that didn’t transform into a desperate, explosive siege.

Matches start off much like they do in a regular last man standing battle. Players drop into the warzone, duking it out over guns and ammo -- and because this is Fortnite, building supplies -- as they grow from weak and vulnerable to heavily-armed killing machines. When you see those green chevrons that represent players in your own group, some of the traditional battle royale tension is lost, but that also opens the door to so many other opportunities. 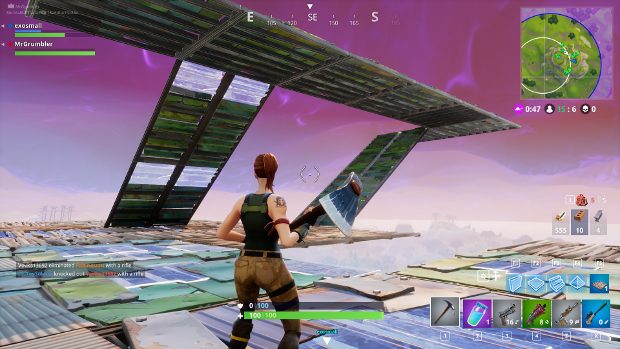 The 50 vs. 50 mode seems to finally understand what Fortnite is. It’s too playful to try and match miserable and brutal Plunkbat. You can ride rockets and turn fast food restaurants into citadels. After the two teams land and get their bearings, it really leans into the whimsy. Even as the circle shrinks, players start frantically building. Everything from stairways to heaven to complicated fortresses spring out from the ground as the island’s towns and farms are consumed for materials. Sometimes they’re useful, but often they’re just expressions of player creativity or silliness.

I write this only a few hours after I witnessed, and participated in, the creation of the most pointlessly elaborate fort. Most players had been killed off, but we survivors had banded together as we charged towards the sanctuary of the circle. At its heart sat a mountain, and we were the first team to reach it. It would be there, we decided without words or deliberation, that we’d make our final stand. 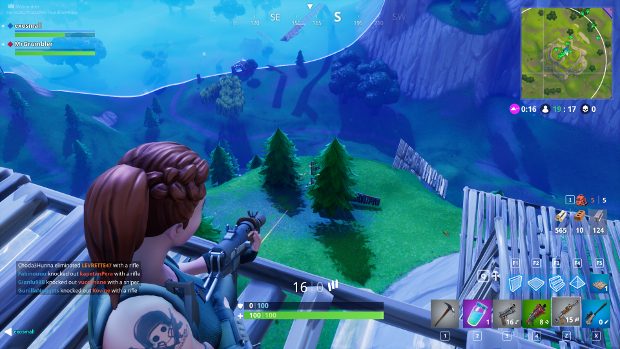 Getting up the mountain normally wasn’t possible, so we started creating a stairway up the cliff, rapidly reaching the summit. There, at the top, the real work began. Everyone chipped in, giving birth to a weird, aimless base. In moments, it had transformed into an amphitheatre, as if we were preparing for some high falutin’ Greek tragedy rather than a fight. Then we started building platforms that extended outwards, giving us a better view of our enemies, who had finally started climbing up to meet us.

As the battle raged on, massive chunks of our safe haven were blown off. I’d constructed a bridge to nowhere that I could run up and down while sniping, but the sections connecting the bridge to the mountain where shot to pieces, leaving my teammates standing on it suddenly falling to their deaths. 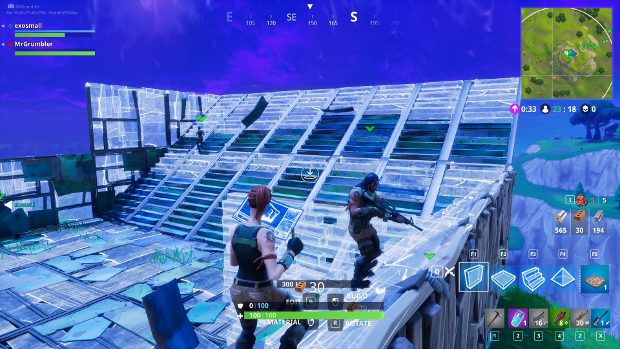 The circle closed in again, forcing us to abandon our beloved, messy base. Conveniently, we’d already started work on fortifications below, meaning we could slide down the mountainside and right into a new base. There wasn’t much need for it, though. Their assault had cost the other team dearly, leaving only a couple left alive for us as we descended to meet them. A short silence was followed by the crackle of gunfire, then victory. I barely killed a soul, but I’ve not played a more entertaining game of Fortnite.

Epic says that the mode is not long for this world -- it's due to end after December 17 -- but I’d be surprised if it didn’t return in a less fleeting capacity. Certainly, however, there’s an element of wishful thinking. I don’t think I can go back to free-for-alls. New modes are also on the way, though, and I am, for the first time, looking forward to what Fortnite does next.