Explosives are on top of the world right now in Fortnite, with Rocket Launchers, Grenade Launchers, and Dynamite causing the deaths of uncountable thousands every day. The latest update, V9.00, has vaulted the Clingers, those lovely Clingers, and brought back the comparatively dull Grenades. Goodbye Clingers, we hardly knew ye!

Our Fortnite Explosives guide is here to walk you through the different types of explosives you may encounter in a Fortnite match, along with useful and advanced tips and strategies both for using these weapons to secure kills, and to avoid dying to them yourself. 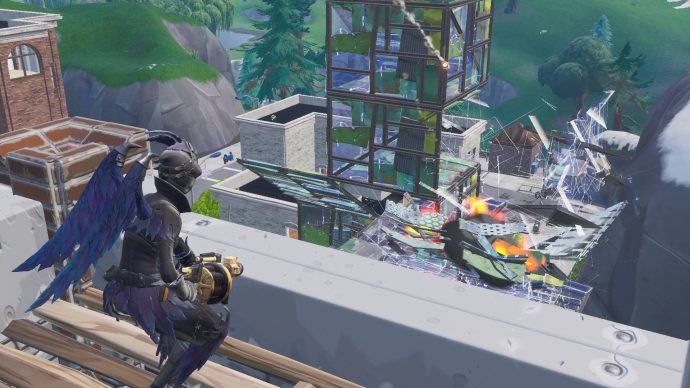 This page is just one small portion of our massive Fortnite guide series, which is packed with tonnes of useful information on everything from Fortnite weapons stats to Fortnite week 6 challenges walkthroughs; from Fortnite Season 8 details to the very best Fortnite locations. So take a look if you haven't already!

Fortnite's roster of explosives can be sorted into two categories: Launchers (Rocket Launcher and Grenade Launcher) and Throwables (Grenades, Dynamite, Stink Bombs, and Bottle Rockets). Explosives deal large area-of-effect damage, which means they can be very difficult to avoid, particularly if the user is keeping up the pressure with multiple explosives in a short space of time. Most explosives deal lots of damage to anyone caught in the blast, and if you're at medium range it requires little skill to use many explosives effectively, as long as you're careful not to put yourself in harm's way.

Explosive weapons are the only weapons in Fortnite capable of dealing direct damage to yourself if you're caught in the explosion radius, so to avoid damage you need to learn when to use these weapons without hurting yourself. As a general rule of thumb, you should never use explosives when in close proimity to your target - although as we shall see there are some exceptions to this rule.

The good thing, though, is that your explosives will deal no damage to your teammates even if they are caught in the centre of the blast, due to Fortnite's stringent "no friendly-fire" policy. This means if you're in a duo, you can safely bombard the enemy with explosives while your teammate closes in and finishes them off. 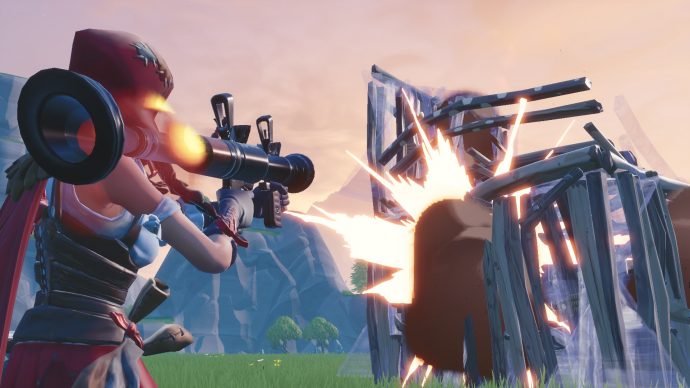 With the recent vaulting of the Quad Launcher in the v7.20 Patch Notes, the Rocket Launcher and Grenade Launcher are left to fight it out against each other for the title of greatest Fortnite Launcher. Both weapons work in very different ways, so let's go through both one at a time. For a full rundown of all the weapons' stats, take a look at our Fortnite weapons guide.

The Rocket Launcher used to be on top of the Fortnite world until the v7.40 Patch Notes. This is now the only weapon in Fortnite that is available exclusively in Vending Machines and Supply Drops, so you'll be lucky to come across one of these beastly Explosive weapons in a match.

The Rocket Launcher fires one rocket in a straight line across any distance. There's no "bullet" drop, no arc to the rocket - it simply travels slowly along a line exactly where you aimed it, until it hits something and explodes, dealing massive area of effect damage to players and structures.

The downsides to the Rocket Launcher are its cumbersome nature - you need to spend plenty of time reloading between each shot - and its predictability. An enemy who sees the rocket coming ahead of time can easily wall up against it and take no damage. However, this predictability works both ways, allowing you to employ some unique and extremely powerful strategies, such as firing a rocket at an enemy's wall, then swapping to a Hand Cannon or Heavy Sniper and taking out the wall just before the rocket impacts.

Grenade Launchers work very differently to Rocket Launchers. Available in Rare, Epic, and Legendary varieties, they sacrifice a bit of player damage (though not structure damage) in order to fire six times in quick succession before reloading. What's more, each grenade travels in an arc, and does not explode on impact, instead acting like a grenade on a timer.

For this reason, Grenade Launchers have a shorter effective range than the straight-as-an-arrow Rocket Launcher, but their ability to spam grenades in a large area makes them much more difficult to defend against in most cases. The bouncing nature of the grenades also makes them much less predictable than the Rocket Launcher's payload, which - again - is a double-edged sword. It makes the Grenade Launcher a little trickier to use, but it also makes it much harder to defend against because you never know exactly where the grenades are going to land before exploding. 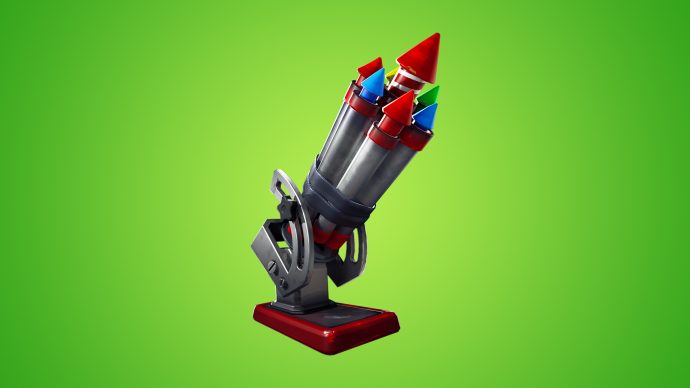 Now let's take a look at all the Throwables, and see how each deals damage in their own way.

Bottle Rockets are... interesting. Introduced in the V7.30 Content Update for Fortnite, they're Uncommon rarity weapons that are found in stacks of 2, and you can hold up to 6 at a time. You can throw them about as far as you can throw Dynamite (not that far), but you're actually throwing the launcher, not the explosive. Once attached to the ground, the Bottle Rocket will fire a great many mini-rockets in an arc several metres away. The barrage lasts 9 seconds, and 45 mini-rockets are fired in that time, each dealing a small amount of player damage and a larger amount of structure damage.

We can see (and in fact have already seen) these Bottle Rockets being situationally useful for remotely tearing down an enemy's 1x1, but the trouble is you need to be exactly the right distance away from your enemy in order to use it well - a drawback not shared by any other Explosive in Fortnite. Yes, it can deal a good amount of damage to enemies if they stay within the target area, but, as with Stink Bombs, most players will have the wherewithall to quickly move out of the area of effect. So it's a useful method of flushing someone out of hiding, but nothing more than that.

After the initial surge of players trying them out to see what they make of them, we certainly don't imagine we'll see many players picking up Bottle Rockets in favour of Grenades or Dynamite, let alone a Grenade Launcher or Rocket Launcher.

Grenades have returned from the depths of the vault, once more being restored to standard play and usurping the Clingers that replaced it for a whole season. They're straightforward damage-dealing throwable explosives that more or less do the same thing as the Grenade Launcher does. They drop in stacks of 3, with a maximum capacity of 10, and anyone caught in their blast radius a player will take a flat 100 damage. This puts it on the same level as a Rare Grenade Launcher. The drawback is that you can't launch a Grenade as far as you can with the assistance of a Grenade Launcher, however they do travel faster through the air, so you're less likely to have to contend with your explosives detonating while still in the air.

While quite boring in concept, the Grenade becomes really annoying for your enemies when you have a full stack of them. Doing so isn't that difficult, considering we're talking about a Common rarity item. With a stack of 10 Grenades, you can put even more pressure on an enemy than a player with a full round of Grenade Launcher shots. It's an obnoxious strategy that is incredibly annoying to defend yourself against, but no one can deny its effectiveness. Just be aware that the fuse that came with the V7.30 Patch Notes is still there, stopping them being the silent killers they used to be way back when.

Dropping in stacks of 3 with a maximum stack size of 10 once more, Dynamite has a long fuse time and you can't throw them nearly as far as a Grenade, but the explosion radius is much larger and specially suited for taking out structures. While it deals a respectable 70 damage to players caught in the blast, nearby structures take a staggering 800 damage, enough to one-shot even fully built metal.

Interestingly, the explosion area of Dynamite is not a sphere but a wide, stumpy cylinder. This makes it much easier to escape vertically than horizontally, so a common defence against Dynamite is to build a couple of storeys higher than where it will explode, so you'll take no damage and fall relatively safely to the ground.

The other big feature of Dynamite (which not many players know, it seems!) is that if you're near enough to some thrown Dynamite, you can pick it up and automatically throw it somewhere else! You can do this even if it's not your Dynamite, and you should bear in mind that it will immediately throw for you after you pick it up, no left-clicking required - so make sure you aim quickly. Of course, you'll need to quickly decide whether to escape the radius or throw it back, because indecision will quickly result in death in these situations.

Stink Bombs work rather differently to other explosives, exploding on impact and creating a noxious cloud that damages those caught inside every second, rather than dealing lots of damage all at once. For this reason it's much more frequently seen in the early game, before players replace them with more powerful explosive weapons.

That's not to say Stink Bombs aren't useful. In fact, they're the bane of many players' Fortnite existence, with their incredibly annoying ability to force a player to move away from their current location. When thrown in quick succession, Stink Bombs can strip a player of their health in a very short space of time, and if thrown accurately they can leave a player with no choice but to vacate their defences.

These awful creations spawn in stacks of 3 but you can only hold a maximum of 6. But as previously mentioned, it's best to replace these with more useful explosives later on, because players that have the wherewithall to move immediately when up against Stink Bombs will generally escape relatively unscathed. 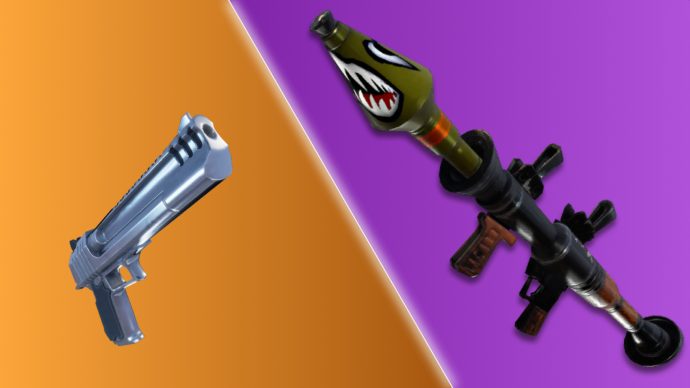 Now let's go over some practical and advanced strategies, tips and tricks on how to make good use of whatever explosives that have found their way onto your Fortnite hotbar.

That's everything we currently have to offer on improving your Fortnite Explosives skills, but be sure to check back every so often as adjustments take place to any of these items, as we'll be making sure this page is fully up to date with the latest Fortnite updates. Now get 'sploding!