Fortnite Battle Royale isn't just about the Battle Royale mode. It has Limited Time Modes, or LTMs for short, that change up the game in different ways. As you would probably expect, Sniper Shootout is a sniper-only match type, though the most recent incarnation makes team pickups impossible. This guide goes over the rules for Sniper Shootout, as well as providing some small tips to get started playing this temporary mode.

With the game being the global sensation that it is, there's a lot to learn about not only getting that all-important "Victory Royale", but also the changes to the map as the seasons progress, and the challenges you can seek to complete. Head over to our Fortnite guide hub for every single thing you need to get started. Alternatively, you can head back to our Fortnite Limited Time Modes (LTM) for all the possible LTMs in Fortnite.

The only weapons you'll see here are variants on sniper rifles. These include the hunting rifle, bolt-action rifle, and the scoped rifles in the game. You can find out much more about them in our Fortnite weapons guide. 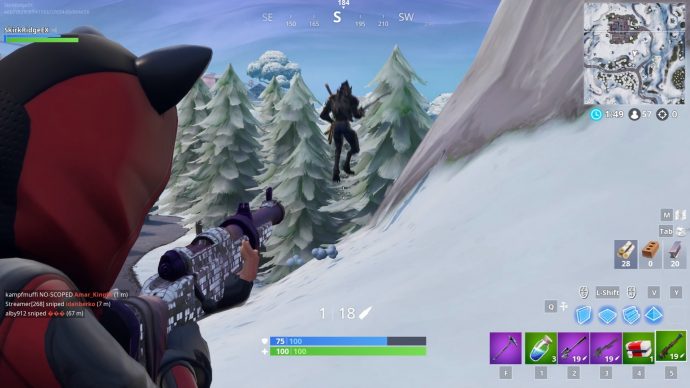 Sniper rifles aren't exactly created equal, so make sure you pick up at least one hunting rifle. It's by far the best rifle for this mode and since increased damage doesn't matter a great deal, the advantage of reload speed is not to be sniffed at. Without the scope, it becomes slightly easier to deal with threats closer to you. If they're far too close though, get out your axe and start swinging as the capabilities of the hunting rifle are hugely hindered at close range.

Building materials do appear in this mode, and can be used to great effect. A sniper is best when high and hidden, so building a tower can make certain situations a little easier to deal with, but it is at the cost of keeping hidden to take out opponents from afar. Using it as improvised cover may be the best strategy until the late game.

The best gadget for traversal is the Launch Pad, so if you need to cover some distance quickly, set up a Launch Pad and bounce into the air. It's preferential to using ziplines, as you can be more unpredictable in the air to those trying to shoot you out of the sky. When on the ground and moving between points, your natural instinct will be to jump around, which is good for avoiding shots. That said, use the jump only to get up to higher points or to avoid shots, as mindlessly jumping around will draw snipers to you, though the main takeaway is to make as unpredictable movements when you can.

Other than that, the same general tips will apply for any other Battle Royale game in Fortnite. You can check out tips for Fortnite vehicles, as well as learn how to maintain your health in our Fortnite healing items guide.