Continuing an increasingly doomed attempt to survive the endless winter of Frostpunk.

Overwork and hunger: the very bedrock of a failed society. Strained beyond belief mere days into proceedings, my people fall ill faster than the attendees of a three-year-old's birthday party in an airless room. We need all hands on deck to gather supplies for the building of a hunter's shack and cookhouse, but the only way to achieve this is to forcibly remove a few hands.

I pass a law decreeing that radical surgery is permitted - anything, no matter how brutal, that will get the sick back on their feet and working again. Let the sawbones do their worst, and let me carry the can of a guilty conscience.

The measure proves enough to get the food buildings erected, at least. My people are stretched thin, so very thin, by all this, and so the next priority has to be expanding their ranks.

I am dimly aware that creating more mouths to feed is its own form of slow-motion suicide. Would it not be best to stay as we are, focus only on grim subsistence? But then one of the gravely ill refuses the amputation that would save his life. I respect his wishes, even though the loss of a worker and the simple, brutal fact our my tortured community's first death is a terrible precedent. 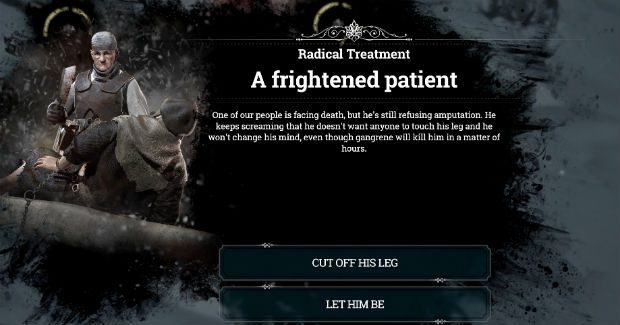 (Britain has just enjoyed its warmest weekend of the year so far. Due to the angle at which sunlight pours through my window, one of my arms is a deeper red-brown than the other. On my screen, the temperature drops to -40°C; ice forms upon the canvas of the tents that lie just a few feet away from the generator's immediate warmth.)

The decision is made. More wood and steel is gathered, more overnight shifts are mandated, a workshop is built, a beacon is built, five workers we cannot spare are drafted into a small expeditionary force, and they make their way to the nearest sign of other survivors.

I am too thrilled by their swift discovery of survivors to think the consequences through. I am already guilty of thinking of these new people as more arms to take up the ever-growing slack . I have my scouts usher them back to the splintered wood and steel skeleton that is laughingly called a 'city', dreaming of all the roles they can fill. A second hunter's hut, a backup infirmary, a gatherer's hut right by that huge coal drift... 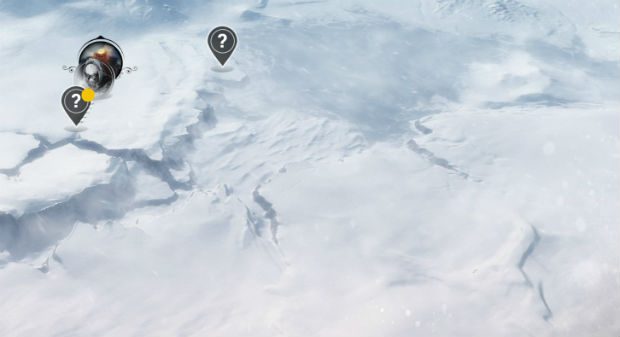 I think about my plans, my pride, my reputation - my certain legacy as a saviour. I do not think about the new recruits' needs. They arrive at their new home to find that they have no homes, no unoccupied tents to call their own, to find that they must spend another night sleeping out in the endless snow. Why did I not think to prepare, to construct overspill tents before I brought these people in?

I order harvesters hither and builders thither, but I simply do not have enough people to solve the problem of having too many people. Within 30 hours, 12 people remain homeless, 57 are starving and 29 are ill. Paralysed by indecision and regret, I let another half day pass. No god comes to save us. 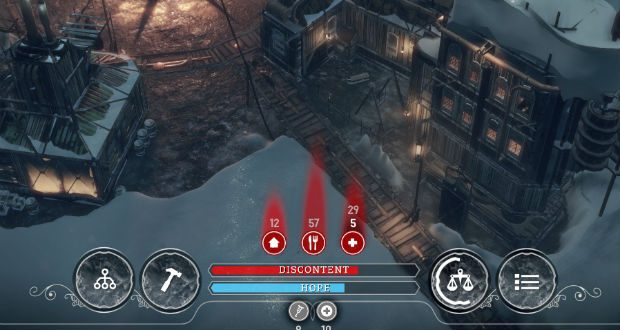 I turn my face to the sun outside my window, and know where I must be instead of here. I freeze my people in their terrible moment and try to forget how much, and how quickly, I have failed them.