The ongoing tale of a desperate first run in survival/management sim Frostpunk.

When last we spoke, everyone was starving, everyone was ill, there weren't enough homes and people were choosing death over amputation. It's day 10 in the frozen remnants of what was once Britain, and it looks like it's all over already.

Though my 'city' suffered and starved, lacking the internal resources to save itself, I had a wildcard - a troupe of scouts, equipped to survive frozen forays into the distant outskirts of this deathly place. It was they who found the survivors that caused our overpopulation problems, and, a few days later, it was they who find a solution. In a 'Sturdy Shelter' to the West, they discover a cache of food, wood and even a steam core (a component to use later in fancy advanced buildings). It is, I do not hesitate to say, a miracle.

Unfortunately, it will take them over a day to return to their desperate homestead, and in that time discontent about food shortages and the pandemic reaches a crescendo. 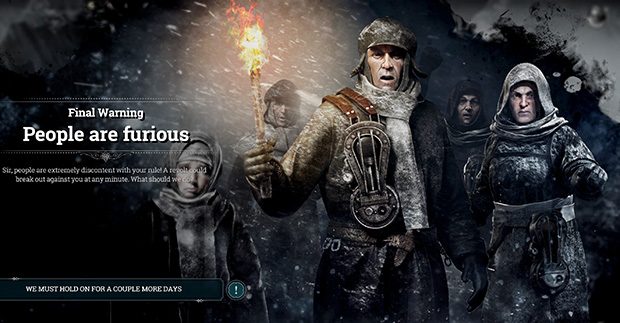 I have a day left to make life better: if I cannot, my grim reign will be over.

The scouts' timely return is like post-apocalypse Christmas. Enough food to fill all those hollow bellies for a couple of days, though this isn't enough to make my people forgive my broken promise that I would do this sooner. What does raise their spirits is my impressive erection. 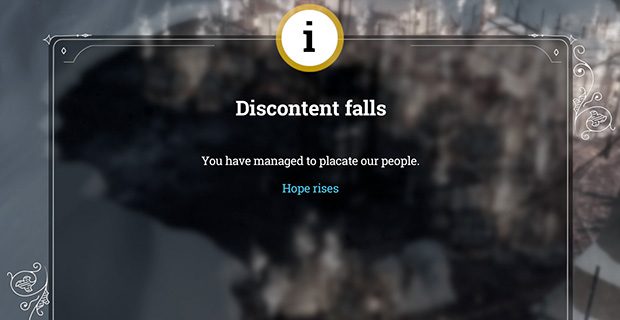 Buildings, I mean. Within hours, we have two more infirmaries, enough homes for everyone, and steam hubs providing warmth to the frozen outskirts. In order to do this, I have to take a terrible risk - forcing more overtime in the wood-gathering hut, which takes me perilously close to being run out of town by my outraged people. But the net result, a town with food, sickbeds and shelter, a town that looks like it knows what it's doing at last, placates them enough. Hope rises anew.

We even wind up with a cemetery, so folk no longer have to share a bed with the blue corpses of their nearest and dearest. Remarkably, 'only' three people died during our frighteningly close call, though there are quite a few amputees wandering forlornly about.

One of our doctors has some ideas about how to prevent more lost limbs, which takes him out of the workforce, but sounds worthwhile in the long term.

I'm so giddy about this season of plenty that I fail to realise until too late that our local resources are running desperately short. I'm able to research a lumber mill to harvest wood from the frozen trees before the last wooden crates are used up, but the real crisis is coal. I'd simply presumed that my miners could directly collect from the larger deposits, but, as I find out when the last surface deposit of the black stuff dries out, they're helpless without heavy machinery.

It's day 13 ,and we already need another Hail Mary.