If you click on a link and make a purchase we may receive a small commission. Read our editorial policy.
Developer: Doinksoft
Publisher: Devolver Digital

Cats are adorable house pets loved by millions, but they're also fluffy little terrors. They can bring home their terrified, half-dead prey, lie down in really inconvenient places, or, y'know, press the one button that makes your spaceship plummet into an abandoned research facility.

Gato Roboto is a cutesy platformer where you control Kiki, the house cat of a pilot name Gary, who is now marooned and immobile after Kiki crashed their vessel. Luckily for Gary, his cat is able to pilot a gun-wielding mech suit, despite not having opposable thumbs.

Inspired by Metroid in many ways, Gato Roboto has players explore the research facility's different, non-linear sectors (running through the old favourites like ventilation ducts and a laboratory), and requires them to solve environment-based puzzles and kill enemies. Kiki will spend most of the game doing this in her mech, which is initially only capable of firing pistol rounds and jumping around. 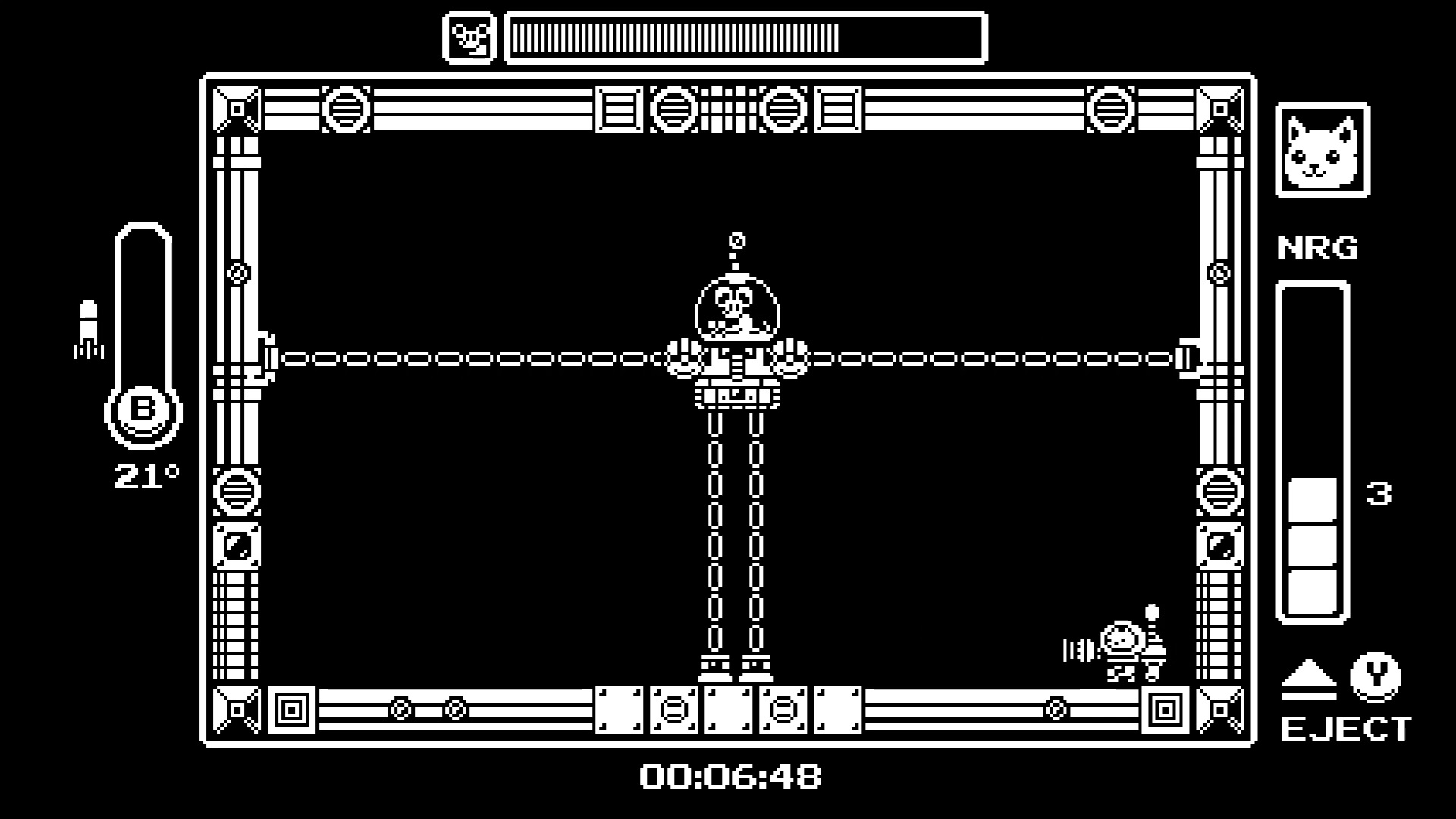 Since this is a 2D platformer, the controls need to be precise, and Gato Roboto succeeds there. Not once did I think that it was the game’s fault that I missed the platform with a jump, or an enemy that I tried shooting at.

On top of that, all the upgrades I picked up only made the controls feel tighter. Gato Roboto scatters a number of upgrades throughout the research facility, all for the mech suit, including health boosts, abilities, and new weapons. Rockets are a particular highlight, as they use a short cooldown timer instead of a finite stockpile of ammo, thus enabling the firing of rockets with reckless abandon. I also recommend using the spin jump to leap long distances whilst bonking on top of enemies like some kind of twisted whack-a-mole.

There are also a couple of items that alter the colours on screen. By default, the sprites are black and white, but they can change to all sorts of other colour schemes, including black and red if you long for permanent eye damage. No matter which you choose, Gato Roboto has a very cute style with a surprising amount of detail in the environments. The haziness of the volcanic area really makes it feel dangerously hot, while Kiki’s little head bobbing inside the mech suit melted my heart. 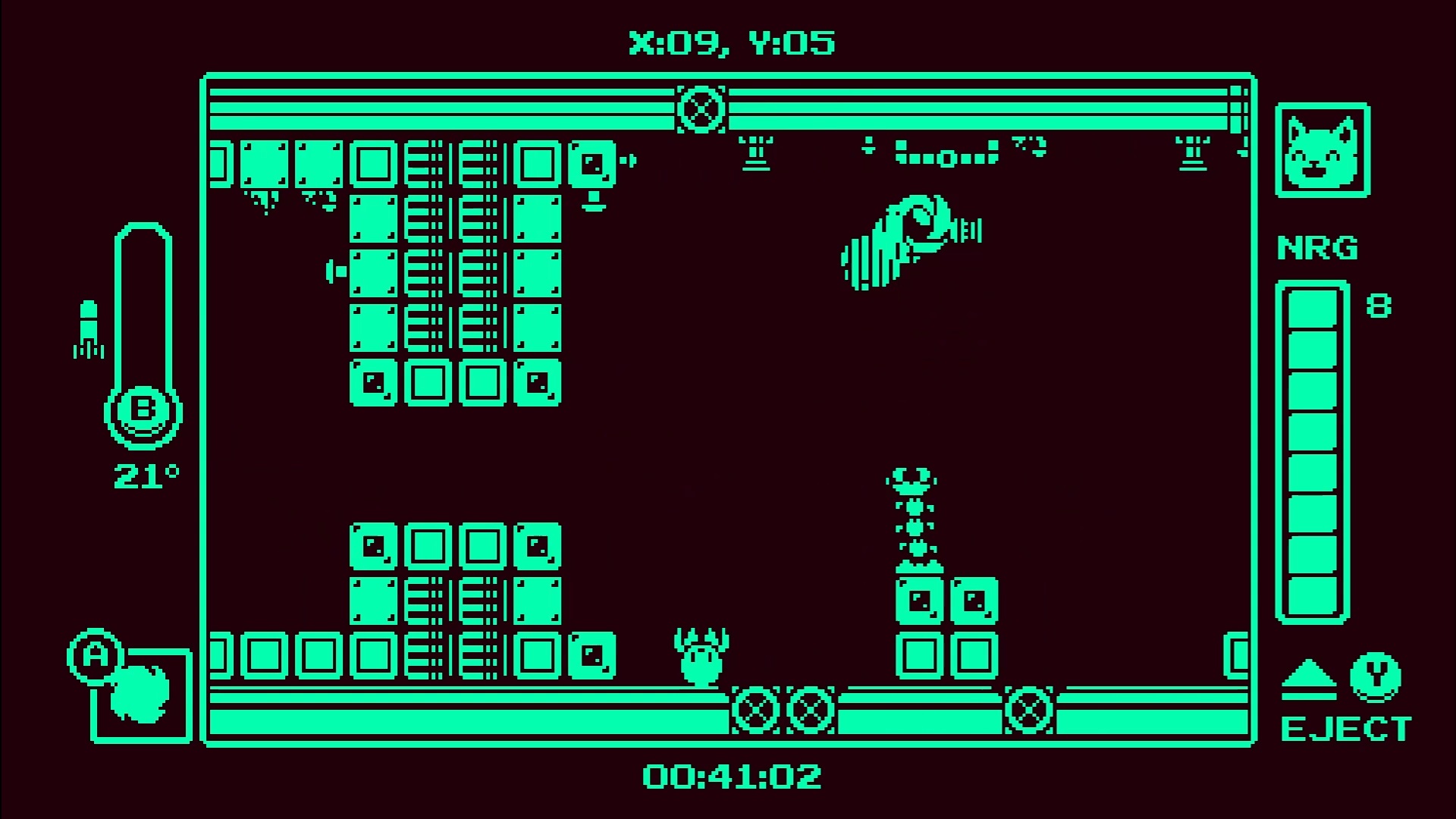 Kiki isn’t just confined to the mech suit, as she gets the chance to pilot a submarine with guns and a fixed turret for some specific sections of the game. Each has a health bar, keeping Kiki safe, but when she’s a lot more vulnerable when outside her vehicles. As an extremely normal house cat, she can climb walls and swim underwater, but any contact with enemies means instant death and being sent back to the last checkpoint.

That may sound like a hassle, but Gato Roboto is a little too generous with its checkpoints, which in turn makes the game really easy. There’s always a checkpoint next to a particularly difficult room filled with hazards, or outside a boss fight. Getting back to where you died is, therefore, more of a minor inconvenience than a deterrent.

Death isn't really a constant companion, anyway. Regular enemies are mostly cannon fodder, ranging from mindless creatures that charge to the occasional mindless creature that launches projectiles. Any hit they land will instantly kill cat-mode Kiki, but will take off one hit point off the mech, so they're not particularly dangerous if you're suited up or encounter a loner. 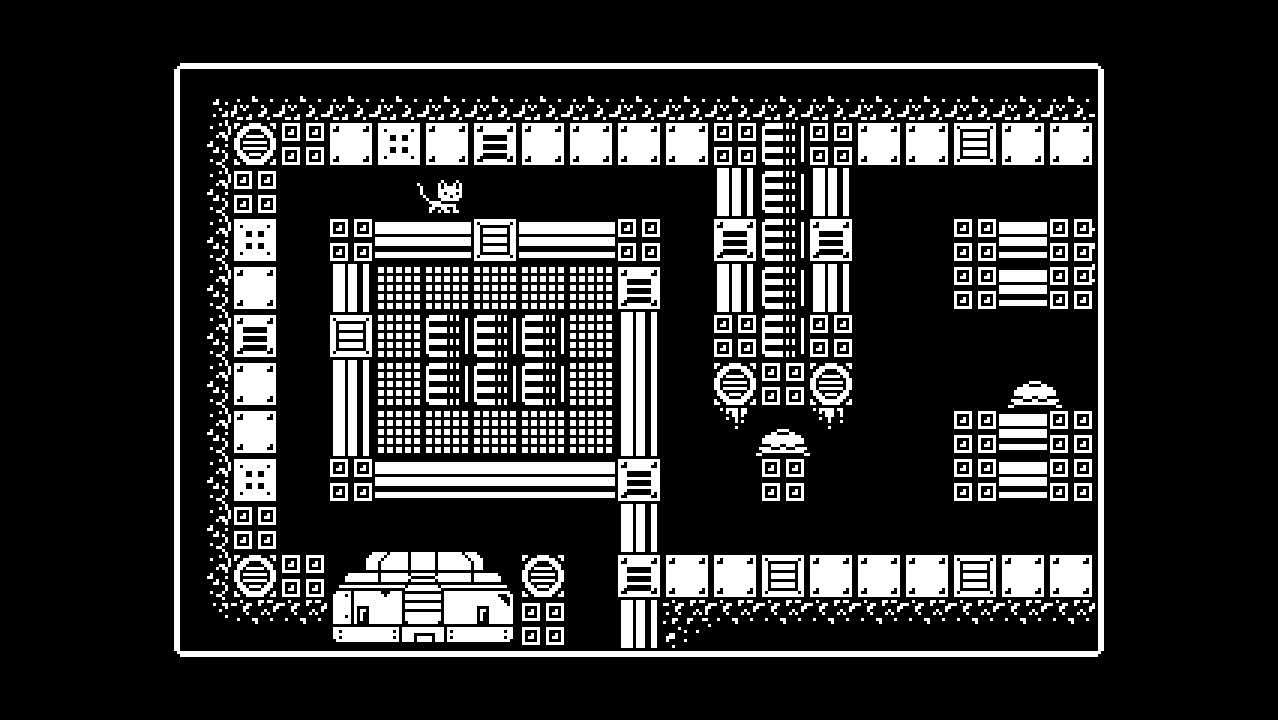 Boss fights only prove slightly more challenging, each one requiring you to use either a specific upgrade or vehicle you obtained recently to defeat it. Their patterns are easy to decipher, and they don’t have a ton of health. Bosses in games like Metroid were memorable because they were a challenge that had a meaningful consequence upon failing it, but I felt no sense of triumph when I defeated any of the bosses in Gato Roboto, or frustration when I didn't.

Added together, the checkpointing and easy fights make Gato Roboto feel like it never really gets going. In an ideal world I would have seen more interesting puzzles and challenging enemies, but as it is, and because there are only a handful of sectors to explore, your couple of hours with Kiki are likely to feel a bit empty.

I really liked Kiki’s face in the top-right corner of the screen, pulling an adorably smug expression as she pew pews her little pistol. But this isn't a novelty animal Instagram account. Adorable only gets her so far, I'm afraid.