H1Z1 has rolled out a major new update today, officially bringing the survive-y Battle Royale out of early access. Along with it, developers Daybreak have added a surprising new variant playmode, called Auto Royale. Auto Royale is a blend of regular Battle Royale systems and perennial PlayStation favorite Twisted Metal.

A full match contains 30 cars split roughly between faster, more agile sedans and heavier, sturdier military vehicles. Each car contains 4 players; 1 driver, 3 gunners assembled via matchmaking if you don't already have a crew. You cannot get out of the car, but in exchange for being fused to its hard, unfeeling metal body, it symbiotically sustains you. Get killed, and you'll find yourself automatically revived ten seconds later at a quarter of your health, but if the car goes boom, your team is out. 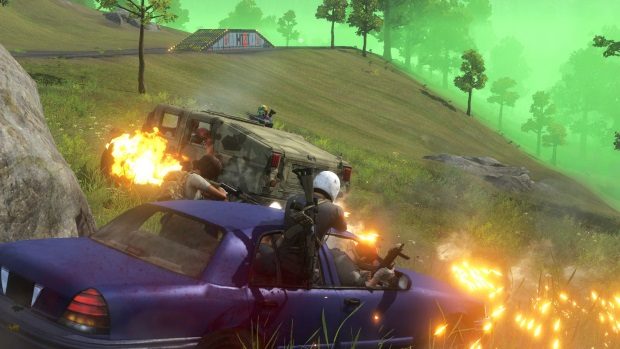 Standard Battle Royale rules are in play. You've got your usual shrinking playfield and Death Zone encroaching on the action, and airdrops of powerups scattered around the map. Different from normal play, the Auto Royale map's pickups are all glowy and obvious and picked up just by driving over them, in classic arcade style. Most ubiquitous among these items is fuel for your nitro boost, but you can also find a jump module that allows your car to leap over small buildings, and various upgrades to armor, speed, and so on.

There are additional powerups located high in the air, requiring you to nitro-boost your way off certain ramps in order to collect them. These tend to be higher quality ones, more on par with the ones you'll pick up from air-drops, so showboating and stunt driving is encouraged. The driver is absolutely the team captain, deciding where you go, and ideally not crashing into anything harder than another car.

Gunner players still have plenty to do. In addition to leaning out of the windows to try and whittle down rival cars health bars (or knock out the driver or gunners), they also control all the defensive powerups, including land mines, oil slicks and so on, activated from the car's shared inventory pool. A well placed oil trail causing the enemy to spin out, followed up with a molotov or two can really turn a fight around. Gunners also decide when to use repair kits, patching up your ride. 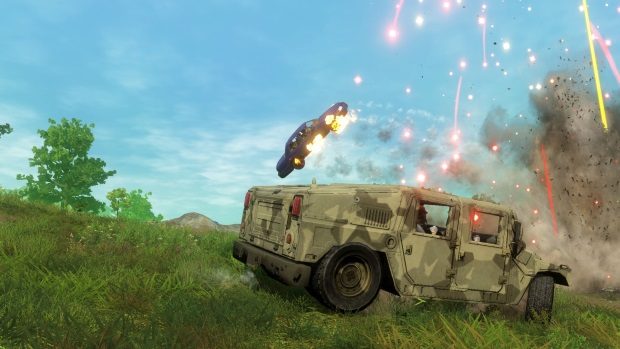 As better powerups also tend to be locked away in armored boxes (the largest loot crates we've seen), gunners also have to destroy those in order for the driver to claim their contents for the team. Best to get them broken open before setting a collision course, otherwise you risk taking damage from the impact.

I got to play a round of Auto Royale on a private test server late last week, and it was pretty fun, even if our team tended to play pretty cautiously. My main concern is that the weapons generally lack oomph when used in a vehicular combat context. Three SMGs firing at once may sound impressive on paper, and menacing to a single player on foot, but when driving it's really got nothing on a high-caliber hood-mounted machine gun's bass-heavy rhythm, or a spray of rockets.

Beyond the new Auto Royale mode, the vanilla Battle Royale mode now allows players to pick which zone they'll parachute into, there's a mini-map to help keep players oriented, and airdrops have been rebalanced. Tying this all together is the launch of the first official Season of the game, ranking players for their long-term performance using metrics that go beyond mere survival rates. Consistent wins and high kill counts will bump players higher up the board, too.

H1Z1 is out now on Steam for $20, and the Season 1/Auto Royale update should be live now.