It turned out that the end of the world came with a bang and a whimper. The bang came from the volcano at the centre of Northgard’s map — a new feature added to the Viking-themed strategy game as part of its free Ragnarok update.

The whimper was me, realising that the blobs of molten rock that its eruption deposited around my territory would soon turn into angry stone golems and start punching my precious villagers to death. I wasn’t ready.

But then I’m never ready in Northgard. I was never ready for winter in the original game: a time of scarcity when food is harder to find, when wood supplies are raided to feed vital fires, and when shivering troops lose much of their combat effectiveness. My little troupe of Vikings would invariably get sick, and invariably some of them would die, and I would curse my short-sighted management that had left my clan with no food, wood, or reason to live.

Ragnarok has only increased the threat. In addition to the threat of rival clans, itinerant wolves, and the inexorable crawl of winter, Shiro’s latest update (which comes after they outlined plans for the future of the game and introduced the new Snake clan in paid-for DLC) adds ghost pirates, dark elf raiders, and portals that let cranky zombie Draugr step out of their hell dimensions to menace your homestead. There’s also that volcano. 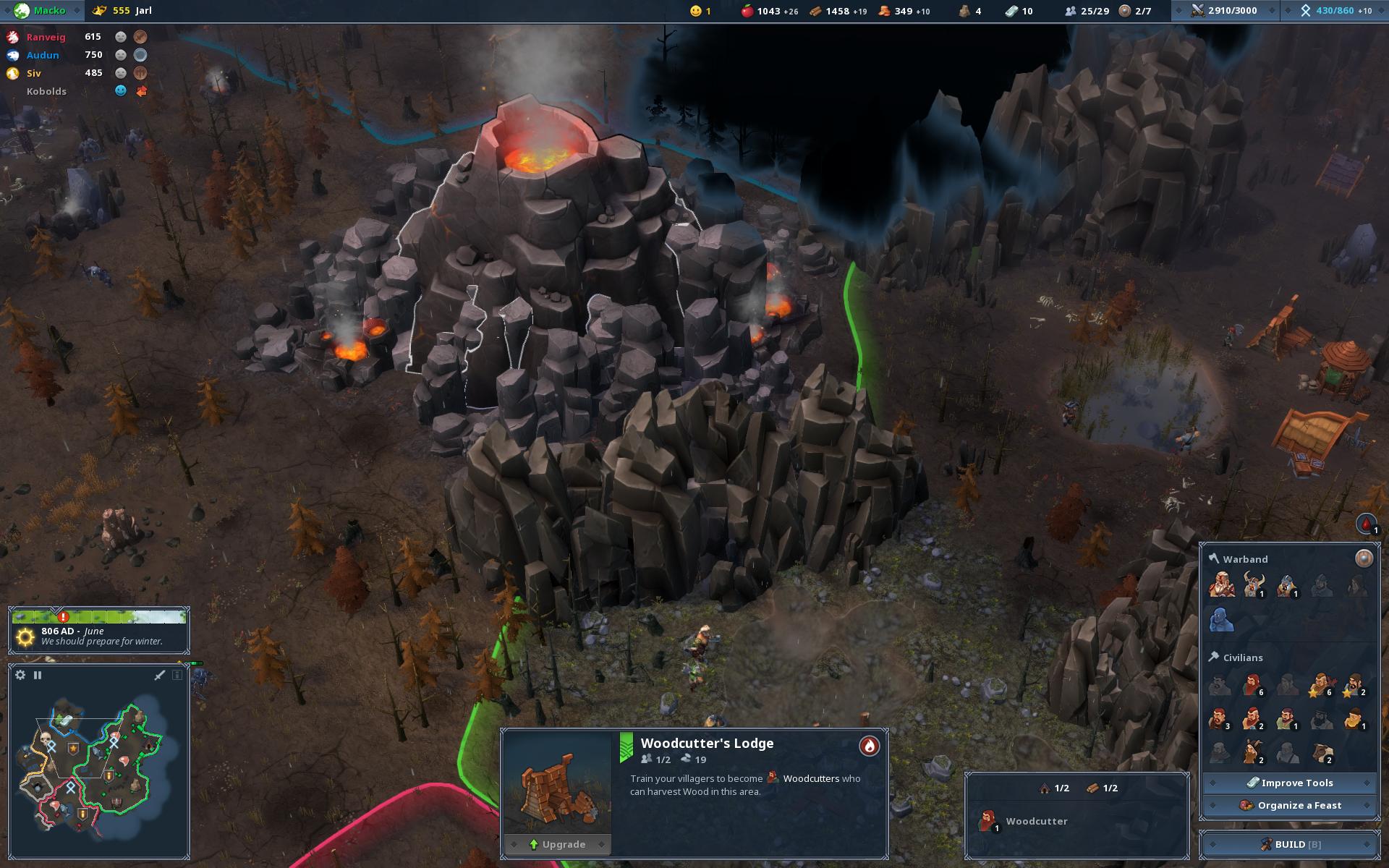 Sitting at the centre of every generated Ragnarok map, the volcano acts as a constant reminder of the apocalyptic setting — if the blasted earth and constant reddish gloom don’t sell the effect well enough. It’s not just for show, either: every few years it will erupt, depositing weird glowing stones across the map. If one of the stones falls in your territory, you’ve got two choices: either build a mine next to it and get to the frantic work of breaking it apart with pickaxes, or wait until it gestates into a tough-as-stone magma monster.

Neither option is ideal. Northgard’s terrain is split into tiles, which need to be colonised, and can only support a small number of buildings, meaning that if you choose the former, you’ll likely need to destroy a hunting stand, lumberjack station, or training camp to build the mine. The latter is viable if you’ve got a dedicated hit squad of warriors standing around, but it costs to both make and maintain a band of fighters. Veteran Northgard players won’t want to be keeping a little army around cooling their heels while there’s important hunting, fishing, and wood chopping to be done

The volcano doesn’t erupt every year, but there’s rarely much of a reprieve from entropic outside forces in Ragnarok, especially on harder settings. Playing with world hostility high, I had to conscript foragers and healers into a makeshift militia to hold off a joint invasion from dark elves and a rival clan in the same year. I managed to stymie the attack, but just in time for winter to kick in properly, leaving the survivors of my settlement starved, sick, and probably wishing they’d seen a quick end at the end of a sword than the slow death in the snow that they got.

In these conditions, Ragnarok is a more precarious version of the original Northgard. Even starting position can break a campaign. The land is too charred to farm, so you’re stuck relying on hunting, fishing, and general foraging for food. Some clans have ways around this problem — as the Wolf clan, I scored early meat by systematically killing off predators nearby — but others will need to stake out claims to deer- and fish-packed tiles early. 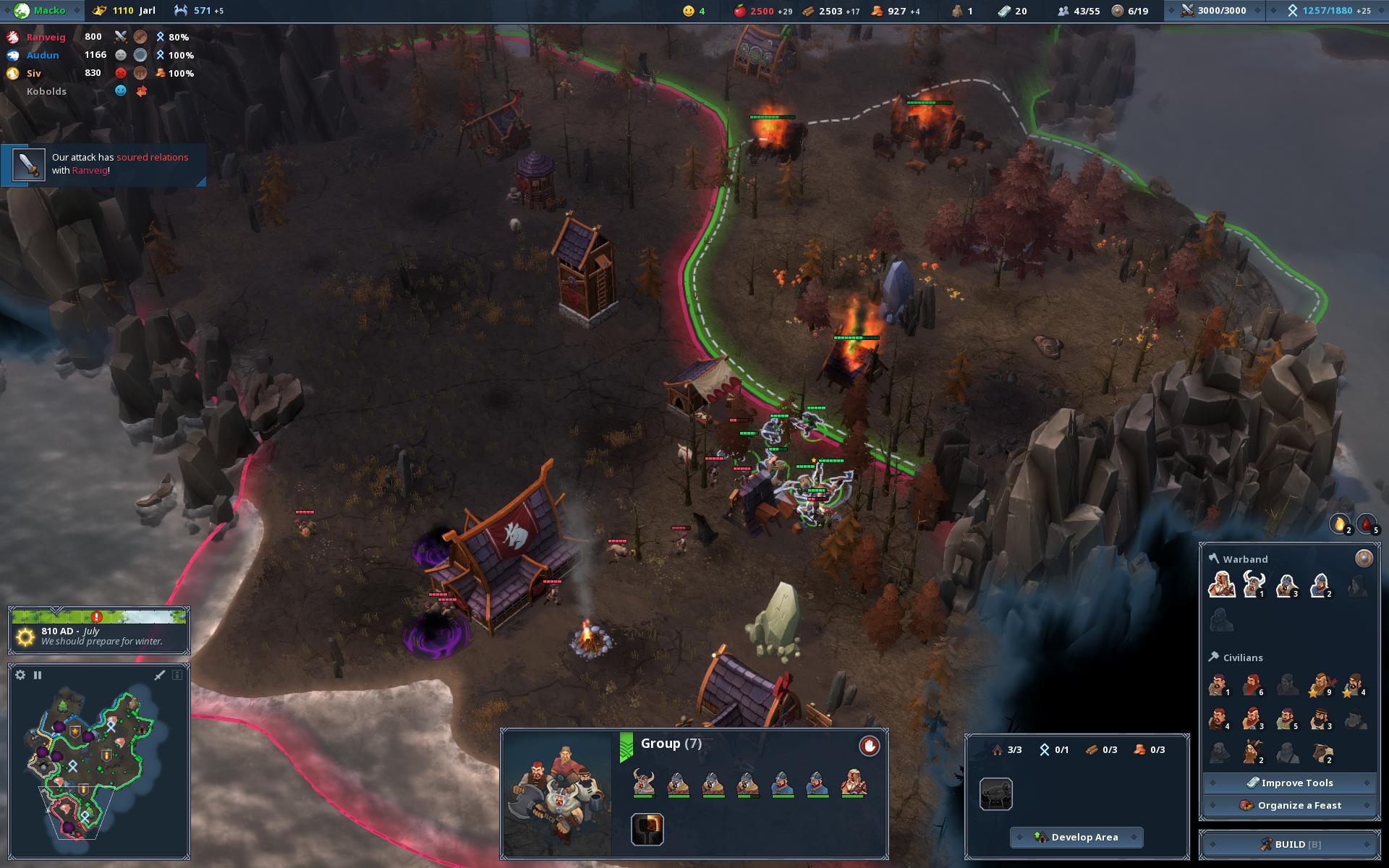 This makes each decision feel more weighty than it did in the original Northgard: a game that, in its base state, was already about making tough choices. Do I upgrade my hunting stand to secure more food? Could I use that money instead to build a defensive watchtower to protect my existing hunters? Can I even spare a woodcutter to retrain? The slow pace of Northgard’s real-time strategy means there’s no need for StarCraft-speed APM, but playing it like a Civ game and planning years ahead is a recipe for a rough winter. The best way is somewhere in between: a firefighter with a scribbled plan.

At least, that’s true on harder difficulties. After being thoroughly tonked on my first run as the defensive Bear clan, I loaded up a world with world hostility set to medium. Immediately the threats were reduced, as I faced fewer early incursions, fewer Draugr pouring out of hell portals, and fewer fiery rock monsters raining from above. I didn’t even face much antagonism from rival clans, even as I dissolved my warband and devoted their time to studying the closest henges.

Observing these rock formations pays out in “Lore,” which in turn unlocks new technologies and bonuses along your clan’s skill tree. Get a certain number of these and you’ll also earn blessings from different gods; keep going and you’ll win a “Wisdom” victory. That was how I was able to win a set of games on medium settings, with half of my villagers turned into loremasters while defensive towers kept watch over my borders for incoming ghosts and elves.

On harder settings, that approach didn’t fly. My tiles were so consistently harried that I had to keep a standing army of axe throwers, shieldbearers, and other stabby types even during times of relative peace. Ragnarok has added another layer to Northgard’s combat with “Military Paths,” specialisations that can be earned through successful fights. There’s three tech chains here — the Guardian, the Conqueror, and the Tactician — but most of the buffs don’t make a major difference. The most useful trait belongs to the Guardian, who increases their warband size for every defensive tower they have, where normally that figure is capped by the number of military buildings on the map. It’s such a useful ability that I chose it on almost every playthrough. 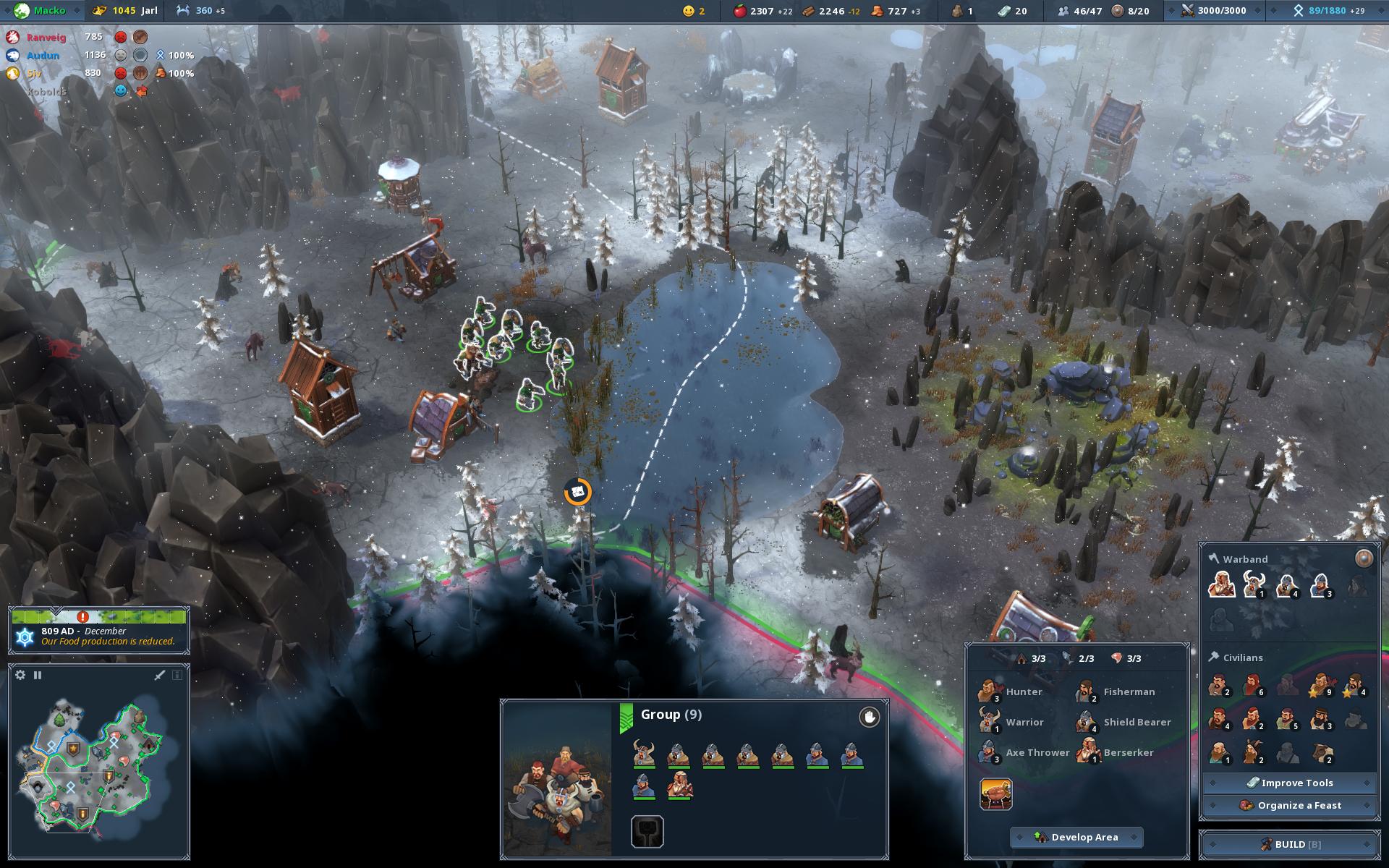 I wish there was a middle ground between Ragnarok’s medium and harder world hostility settings, but there’s a pleasing amount of customisability in other game settings. I lost an early game to an early trade victory by the Raven clan, executed quietly while I tussled in honourable battle with other rivals. Annoyed that they’d sneakily stolen the game from underneath me, I turned off trade victories entirely for my next match. I went even further after that, removing all victory conditions but dominion — only winning after mulching all rival clans and taking their town halls — and steamrolling my way across the map.

Ragnarok’s extra-harsh world incentivises this approach, especially when next-door neighbours take prime hunting or fishing territory. Northgard’s combat is simple, but in pulling back wounded units and managing multiple battles on different tiles, there’s some minor micro possible. It’s over quickly, too. Northgard’s not a speedy RTS, but its small warbands and mid-size maps means that there’s little of the late-game grind you get in Civ and other 4X-ier games when going for a military victory.

More draining were the constant incursions I faced on harder settings. It was hard enough forging a new community in the original game’s cold climates; doing it all at the end of the world can feel impossible, and my appetite to deal with yet another ghost raid or rat infestation dwindled after my fourth or fifth game. But Northgard shines in single skirmish sessions, where Ragnarok offers a cerebral and enjoyable balancing act, posing a series of dangerous situations and difficult decisions that tax the brain in ways that few other strategy games do. All of that means that the end of the world is a solid reason to come back to Northgard’s unique shores.