If you click on a link and make a purchase we may receive a small commission. Read our editorial policy.
Horizon's Gate review
A seafaring RPG about charting your own path across oceans and towards fame, Horizon's Gate is a joy to play.

As I sailed westward along a remote, equatorial coastline, I clocked an unfortunately major issue that was about to befall me: my food supplies were in dire shape, and there wasn’t a single port in view for my crewmates to fill their rumbling bellies at. So, I sailed into deep water until I was attacked by a horde of sea monsters, lambasted them with a barrage of rip-roaring cannonballs, and salvaged some distasteful but edible meat from their buoyant carcasses. Morale took a hit - likely courtesy of their grotesque bodily pungence - but we were sufficiently fed to sail another day.

Horizon’s Gate is a seafaring survivalist adventure that boasts a gorgeous, retro pixel-art style. Although there is a narrative in place - with joyously raucous maritime dialogue consistently dotted throughout its trajectory - sailing aimlessly in search of exploratory endeavours is what marks it as something truly special. 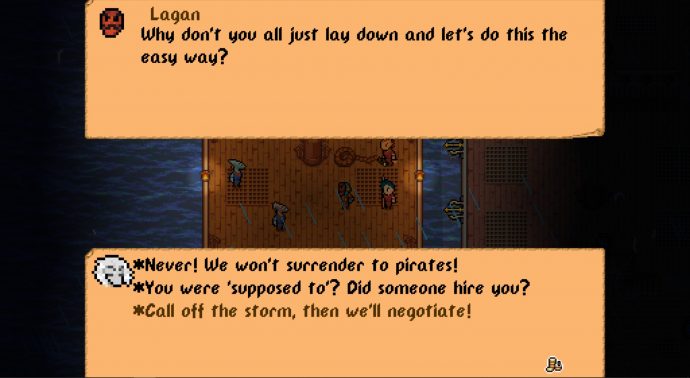 The gist is this: you, the Commodore of an independent fleet, are tasked with recruiting pub-dwelling seafolk to man your armada. It’s modest at first - you might have little more than a plain cargo cog, staffed by a ghost crew of four or five solitary beer-guzzlers looking to don their sea legs in pursuit of fame and glory.

At the beginning, these mercs are total strangers who are likely only interested in the coin you pay them to stick around. You bump into them in humble little cafes while docked at port, and pay them a small fee upfront with the promise of extra compensation paid per day thereafter. However, as you spend time together and explore the vast ocean around you, they’ll begin to open up both to you and to one another. Before long the banter will begin to flow even when your ships are still - provided you’re sat in a cafe and have bought the lads a round of the local speciality, which is often alcoholic in nature. They don’t ask much from you - except a coin a day for their service - but put a mug in their waiting hands and they’ll be your new best pals in no time. 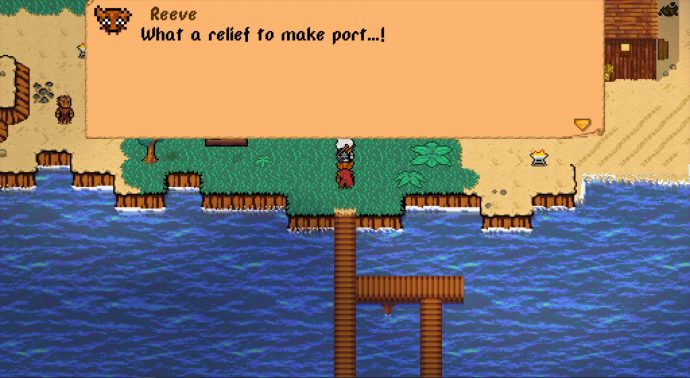 As you gradually build up some solid capital from the spoils of war and plunder, you can splash out on extra ships for your fleet and afford to hire even more sailors from the ports you trade with most regularly. Landing at ports changes the perspective from distant birds-eye sailing sim to top-down Zelda-like town levels, and your ship is subbed out for a landing party of five members. Although there is plenty to do on land - you can trade with merchants, train new classes, gain favour with rival courts, and even hang out with literal cults - I spent most of my time sailing, and only anchored my fleet when I was in need of either food or money for my ever-ravenous crew.

But it’s sailing that makes landing worthwhile in the first place. Towns you visited early in your quest may change rapidly over the course of your naval odysseys. Talk of your adventuring spreads to coastal towns at the nautical equivalent of the speed of light, and some more entrepreneurial explorers quickly begin to recognize where they’ll be most likely to catch your eye.

This phenomenon is tied to the game’s passive fame system, which operates in the background. It’s a tad intimidating at first because it appears slightly more complex than it actually is, but after playing for a short while you’ll be able to see the ocean for the whirlpools. Simply put, your fame is divided into accomplishments tied to exploration, combat, and trade. 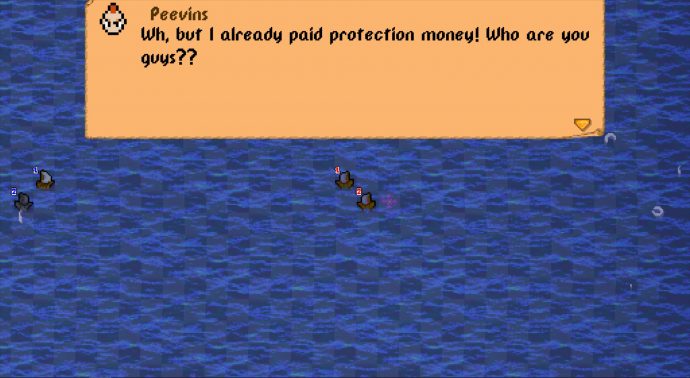 Exploration-based fame increases as you unveil more of the naval world, which provides you with unique information you can sell to cartographers at port. This predominantly comes from seafaring in boatform, which allows you to document previously uncharted waters. Meanwhile, combat fame is relatively self-explanatory: it rises when you emerge victorious from tussles with pirates, monsters, and, if you’re truly desperate, unfortunately unaware merchant fleets who are just trying to transport some grain. This kind of fame can be earned in multiple ways - you can fight massive spider lads in dark forests with your landing party, or blow kraken-esque colossi to smithereens by loading your fleet with irritatingly pricey cannons. Trade fame goes up as you begin to recognise how capitalism can be exploited by flogging your boon for frankly vulgar amounts of gold, which you can then then spend on said irritatingly pricey cannons, as well as special little fish things that help you navigate your way around the seven seas.

There are also various other systems in place, which constantly demand your full attention. You can’t just hold down a directional control while you text your mates - you’ve got a merciless food meter to worry about, as well as the daily upkeep necessary for compensating your crew. To reiterate, there are also highly aggressive Nessies skulking just beneath the ocean’s meniscus, some of which have the power to shoot you with some sort of strange projectile from halfway across the screen. You’ve got to be on your sea toes if you want to keep your fleet functioning, and failing to prepare means preparing to end up lost in the Mariana Trench without any scuba gear. 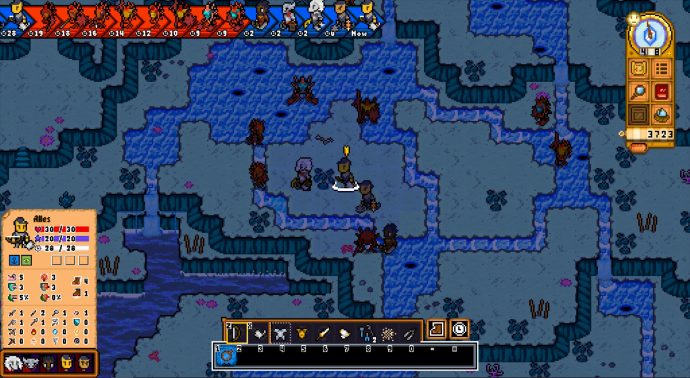 It’s manageable, but not as much as a game emphatically and exclusively devoted to management might be. After all, it’s a naval survival game first and foremost, which predominantly thrives on the sense of wonder invoked every time you discover what is admittedly likely to be a very inconsequential harbour. Some places you happen upon are great - I had a massive battle with some sort of bone demon in a remote western desert, who had taken it upon themselves to construct a lair out of the arbitrarily-placed skulls and spines of its enemies. I also found a deserted farm that had been overrun by Cleevers, a sub-oceanic species who also make weapons and ships out of chitinous carcasses and cartilage. Their pointy sticks are far too intimidatingly ugly to sell at port, but they pack a serious punch when put to their intended use.

This brings me to my next point: combat. It is dishearteningly boring at first, but give it an hour or two and there are systems in Horizon’s Gate that eventually make its turn-based fistifcuffs more attuned to seafaring cannon chess than contemporary button-mashing.

It’s tedious to spend several minutes traversing a tile-based arena early in the game to wail on enemies with a blunt object, but soon you unlock elemental spells and become able to summon bat friends to aid you in your fighty bouts. You can eventually assign each of your five fighters a pair of unique classes, which each come with their own special abilities and passive buffs. 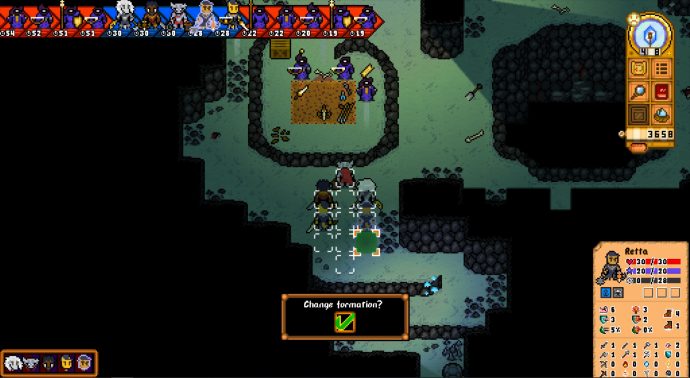 As mentioned above, you can also declare war on sea monsters and other ships - regardless of whether they are friendly or not - and trigger a totally different form of combat. It’s still tile- and turn-based, but instead of swords and sorcery you’ve got big boaty beast bombers in an aquatic arena. These pelagic skirmishes are brutally wonderful, as the satisfaction felt after successfully blasting through the hull of a brigantine never wears off. In fact, it only grows alongside your fame and ever-inflating ego. You were once a lone sailor grateful to escape the evil clutches of a traitorous crewmate-cum-pirate, but now you are the undisputed monarch of the oceans, slayer of monsters and hoarder of treasure. There is an argument to be made that you are the utterly abhorrent antagonist of Horizon’s Gate.

It’s also worth mentioning that the music tied to sailing is brilliant. Imagine a lo-fi, synth-based track with the percussive cadence of an onward stampede and you’ve likely conceived a similar sort of sound to what you’ll hear as you cruise along Horizon’s Gate’s wayward tides. 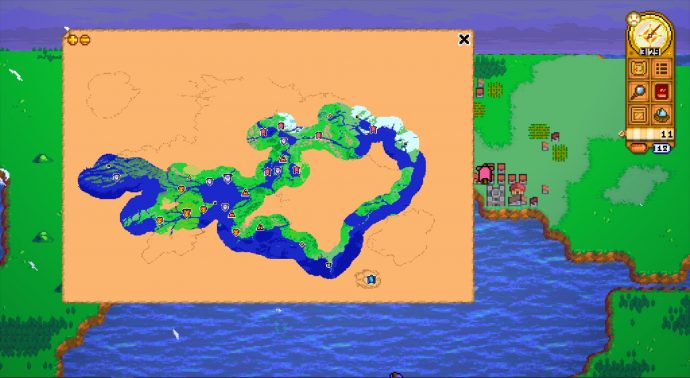 All the while, you’ll discover groves infested with all manner of creepy crawlies and harbour towns with cafes serving gigantic beans to-share. Or, if it strikes your fancy, you can go for alcoholic beverages fit to make a Kerren keel over (Kerren are bipedals that are highly skilled in intellectual pursuits - there are also green people with snake tails instead of legs and cricketine humanoids that go bzz-bzz when you talk to them).

Overall, Horizon’s Gate is a joy to play. Its simple art style, combined with its excellent soundtrack and sense of exploration make it a naval sim that captures the inherent charm of discovery. At the same time, you can fight fluorescent stingrays the size of houses and convince people to build ships out of still-living trees - they even have regenerative hulls! It combines dangerous excursioning with absurdly silly worldbuilding, and because you spend about as much time on land preparing to set sail as you do actually sailing, climbing aboard your boat is exciting every time.

Whether you’re taking on a titanic Shellship - that’s what the aforementioned Cleevers sail up from the abyssal depths of the ocean - or selling research information to a “scholar” at some kind of weird cult, it ensures that nothing you do is inconsequential. The more time you spend on the open water, the more this world will have to offer you and your still-hungry crewmates.