If you click on a link and make a purchase we may receive a small commission. Read our editorial policy.
This is The Mechanic, where Alex Wiltshire invites developers to discuss the difficult journeys they’ve taken to make their games. This time, Ori And The Will Of The Wisps [official site].

Ori And The Will Of The Wisps feels so good to play. The fluidity of Ori’s movement; his quickness and agility; the sense of his weight and presence in the world – he’s a product of both traditional animation and leading graphics technology which developer Moon Studios has built up over years to make a sequel that surpasses the already beautiful Ori And The Blind Forest.

When creative director Thomas Mahler tells me he thinks it’ll be the reference for 2D platformer visuals for years to come, I think he’s could be right. It’s down to countless improvements, tiny and large, by Moon’s artists and its programmers across every aspect of the game, from fronds of foliage to hit reactions. And they started by transforming Ori’s nature.

Namely, they tore out the way Ori is rendered. You probably never really noticed, but in Blind Forest he’s a 2D sprite that’s animated at 30 frames a second. The screen, meanwhile, updates at 60 frames a second, so if you look closely, Ori’s run cycles and springing leaps don’t quite move as smoothly as the rest of the scene.

But that was only part of the problem. Fixed to the frames of animation his animators could produce and fit into memory, he can’t elegantly hang on to rotating platforms, fluently grapple onto things, or naturally stand on irregular surfaces and inclines. Being a sprite limited what Ori could do.

So in Will Of The Wisps, he’s 3D. It was an immediate challenge for his animators, since many came from the likes of Disney, Pixar and Dreamworks and were used to working at movie framerates of 24 FPS. “We went for 60, which is nuts,” says Mahler.

Aside from its smooth framerate, being 3D also opened up a new sense of fluidity because Ori can now blend animations between states. Take the vertical poles Ori leaps on to, his momentum spinning him around before he comes to a stop, or simply jumping and landing.

“A lot of people don’t realise how much different Ori 2 feels because there are no jerky transitions between movements,” says lead programmer Gennadiy Korol. “The worst thing that can happen is jerky animations and transitions, where your controller goes from one pose to the other, and bam, it breaks the feel of the game.”

And just to further smooth out his naturalistic movement, a layer of physics animates his ears and tail separately, so they dynamically follow through from his body’s momentum. “You could never do that with sprites, because they’re pre-baked,” says Mahler.

But while blending and physics is all dynamically driven, Ori is still fundamentally the product of traditional animation principles. Mahler is a huge proponent of squash and stretch, the animation technique which emphasises an object’s strong or sudden movement by momentarily but massively distorting its shape.

“Actually it’s very difficult to do squash and stretch with a 3D pipeline in games,” says Korol.

“To put it into perspective, I don’t even think Nintendo is doing it,” says Mahler. “But it adds such nice fluidity. If Ori hits and you extend the arm to 150% its normal length, and then like a spring you pull it back in, it creates this feeling of punch you’d otherwise never get from a mocap game. We tried so many things. If you’re familiar with hit-stop, we even tried that.”

The problem is that it’s very difficult to scale joints in a 3D model. For Moon, it meant building rigs that allow traditional animators to follow Disney’s century-old conventions by stretching every joint, and then to build software that can translate them into a format that Ori’s engine, Unity, can understand and work with.

“It’s a weird thing to me that the industry at large said that keyframe animation is expensive so let’s not do it any more. Mocap is really cheap because you can hire a couple of actors and they make their funny little dances and then, hey that’s it. While mocap has to be cleaned up, honestly, if you’re an animator in the game industry and all you’re doing is cleaning up mocap, the art behind animation really gets lost.”

But some animation needs an extra dynamic nudge to really land, such as Ori’s attacks, which in Will Of The Wisps are a lot more direct than the short-range energy bolts that comprised Blind Forest’s combat.

Each weapon hits with palpable impact, courtesy of layers of additive animations that depend on the situation. If you’re hitting an enemy from the front with the Spirit Edge, the game might add 30% of a hit reaction to whatever the enemy is already doing. Hit one with the Spirit Smash from behind, and it’ll get up to 150% of the hit animation to really communicate the power of the attack.

“You get this really satisfying reactive impact on enemies that we couldn’t do before,” says Korol. “That’s especially true for big bosses.” Now, if you hit a specific body part, it’ll react to the blow. “It’s small things, not something you necessarily think about, but it’s important it’s there.” And it led to something of a schism in the studio.

Delivering hit reactions is an old discipline; over the generations, games have used various effects to show you’ve hit an enemy: damage values, splatters of blood, and hit-flash, where the whole enemy becomes momentarily white.

Anxious it was preventing the game’s new hit reactions from being as visible as they could be, Mahler decided to take hit-flash out.

“There was a huge debate about it in the team!” says Korol. But, Mahler figured, why keep to a convention that was designed to overcome ancient memory limitations by flashing a sprite white instead of having to hold in memory one to show its reaction?

“When you’re faced with something not feeling as punchy as it could be, there are a million things that you can’t think about yet,” says Mahler. “But then, when you’re really in the trenches and a milestone is coming up and we’re telling Microsoft that, ‘Hey, the combat will be really good in this milestone,’ that’s when you have to sit down and figure it out. Even Microsoft doesn’t know a bunch of the shit we tried.”

Another category of that shit is the way Ori can affect the world in Will Of The Wisps. Every single piece of scenery is rigged so it can move and respond to Ori’s weight, or the swing of his Spirit Slash. Like so much about the animation in the game, it’s a small detail, but you definitely feel it.

“Every single mushroom, grass blade and flower, every art piece in the foreground, central layer and background, when you smash your hammer, the entire environment shakes and moves,” says Korol.

Korol did, in fact, build a prototype for this system in Blind Forest, and some platforms use it to move, but he couldn’t possibly scale it to the entire game on his own. So Moon hired Alexey ‘Intrusion’ Abramenko, who has pretty strong expertise in platformer physics.

“He’s a crazy physics guy,” says Korol. “The first thing we did was to take my prototype and build something that’s in-engine. The artists do their pass on a scene, and then you just go and place joints and the framework automatically skins everything. We’re big on the idea of making a fantasy world you can believe exists; tactile and realistic so you can forget you’re playing a videogame.”

And for Moon, apart from giving Ori more of a presence in the world, it also forced the artists to give thematic meaning to the abstract spaces that Mahler originally blocked out to give each level a flow for Ori to run and jump through – “instead of stupid floating platforms that make no sense and have no physical explanation in the world,” as Korol puts it.

So, along with layers of visual effects to accent every hit and jump (“I love the effects to be juicy, painterly; I want the game to have the best visual effects you’ve seen,” says Korol), there’s always a lot going on in Ori And The Will Of The Wisps. And that presented a problem. It was hard to see where Ori is, what he’s doing, and what’s happening to him.

“OK, we have bright backgrounds, glowing enemies, glowing Ori, and now you layer on top a Spirit Sword or other spells, which are glowing bursts of light,” says Korol. “How do you make all of that visually balanced and readable?”

So – and you won’t have noticed this – the game dynamically creates subtle shadows behind certain objects so their bright silhouettes stand out, whether an explosion or a slash. “We have to build tech for this stuff because there are no off-the-shelf solutions,” says Korol. “We’ve got to be creative. There’s no book for how to make visual effects readable for 2D combat games.”

And that’s because what’s perceived as the state of the art in games moved on from 2D games long, long ago. Mahler says that Moon is one of the last studios that has invested heavily in 2D graphics. 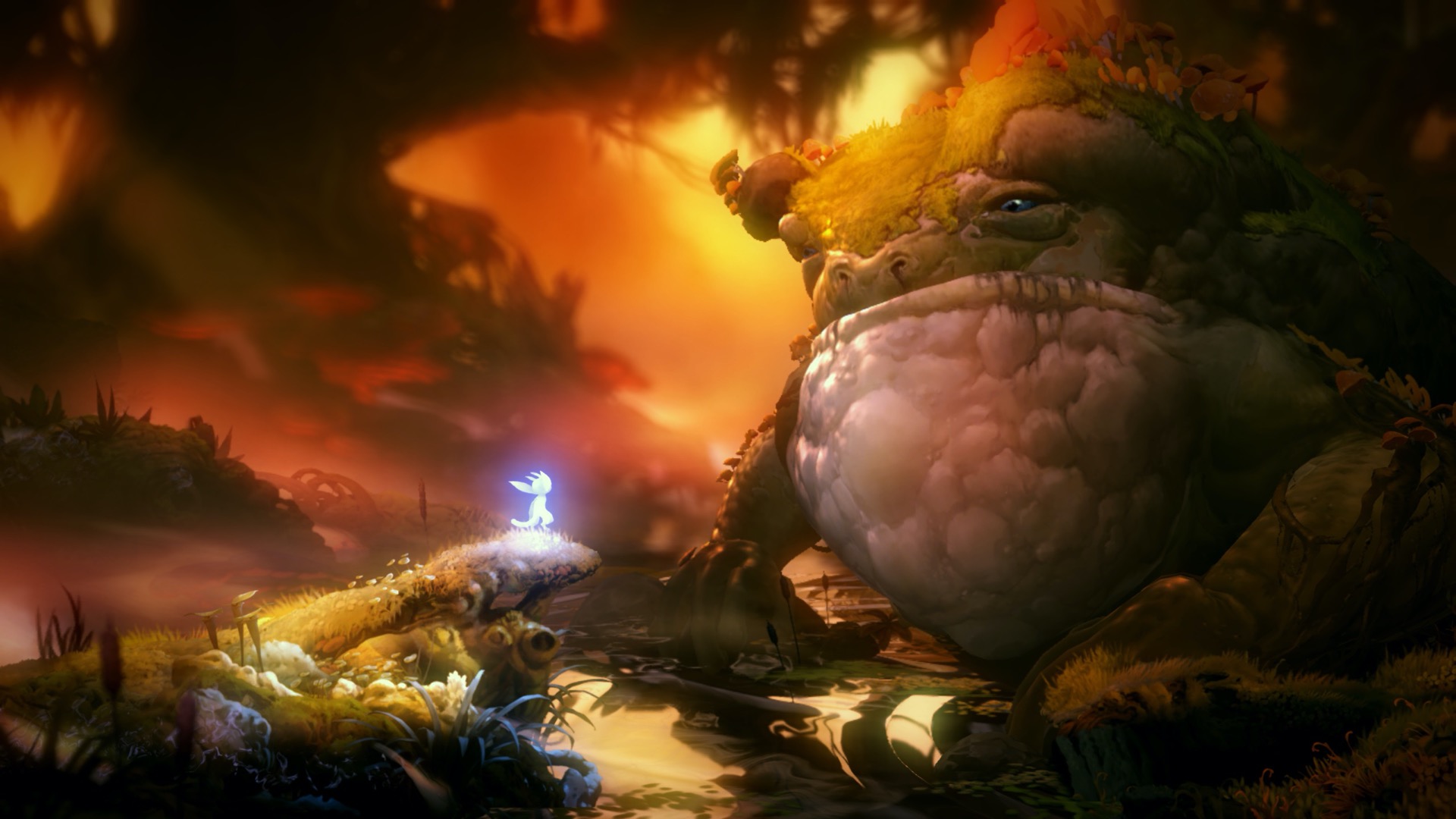 “Will Of The Wisps will probably become the reference for what a 2D game will look like for probably the next decade or two,” he says. And while that might sound like a brash statement (if Rayman’s team is working on something new, perhaps they’d have something to say about it), he could be right – and he’s a little sad about it. “Look at the business of it, it doesn’t make a tonne of sense for other studios. Even Nintendo.”

Indeed, Mahler feels Moon got lucky with Ori And The Blind Forest’s success, and that it’s unlikely a new IP with the budget of Will Of The Wisps would turn a profit.

“And what people don’t realise is that there’s an art to making 2D games that look like this,” says Korol. “And on top of that, it goes against every single idea that powers current generation hardware.” Modern GPUs simply aren’t designed to efficiently render the hundreds of transparent layers that go into any one of Will Of The Wisps’ scenes.

“We’re already working on our next game, which is an ARPG,” says Mahler. ”It’s not 2D. It’s a 3D game, and we’re constantly finding, oh my God, the engine does that? You get this for free! With Ori it was just painful.”