Many of my mercenaries have died under arms, but Meinolf's death was the only tragedy. While collecting a reward in the town of Birkenstrand, my band were approached by a townsman who insisted the kid was such trouble their best option was to foist him on me. My band, the Stalwart Standard, had a vacancy: the swordsman of the crew had died to a ghoul, so I outfitted this new, youngest member with partially intact and presumably bloody gear. Meinolf cost me just six gold, or one day's wages, because just a few turns into his first battle he was dead. I sent him to block an enemy brigand on a ridge from moving forward and attacking down at my men, which he did successfully for two rounds before he was clubbed to death. The Stalwart Standard were hiring again.

Battle Brothers is a game about managing a mercenary company in a grim fantasy world. Primarily, that means commanding men like chess pieces in battle on a hex grid against brigands, necromancers, goblins and other beasts, but Battle Brothers is about managing men outside battle too. What town will they go to next? What job should they take? Do they have enough food to survive? Critically, how will you pay them tomorrow? If pay is behind, men are hungry, injured, or their compatriots have died, they'll be less effective in battle and prone to desert. Battle Brothers excels at linking its tactical layer – fighting monsters on a hex grid – with its strategic layer, managing the company. Both layers work together to realise the game's fantasy of managing a mercenary company. Battle Brothers isn't about winning battles and finishing the story, but getting rich and famous.

Your first decision in Battle Brothers is the name of your band and the colours of their standard. It's almost certain that the handful of men in your party are doomed to die or desert, but the band itself will (hopefully) outlast its founding members. I chose the name Stalwart Standard and their colours – three axes – less because it's memorable and more because I don't like to duplicate the identity of whatever character or group I'm controlling in a game across runs. It's a difficult rule to adhere to in Battle Brothers because my whole band has been completely wiped out many times, which means starting all over again. 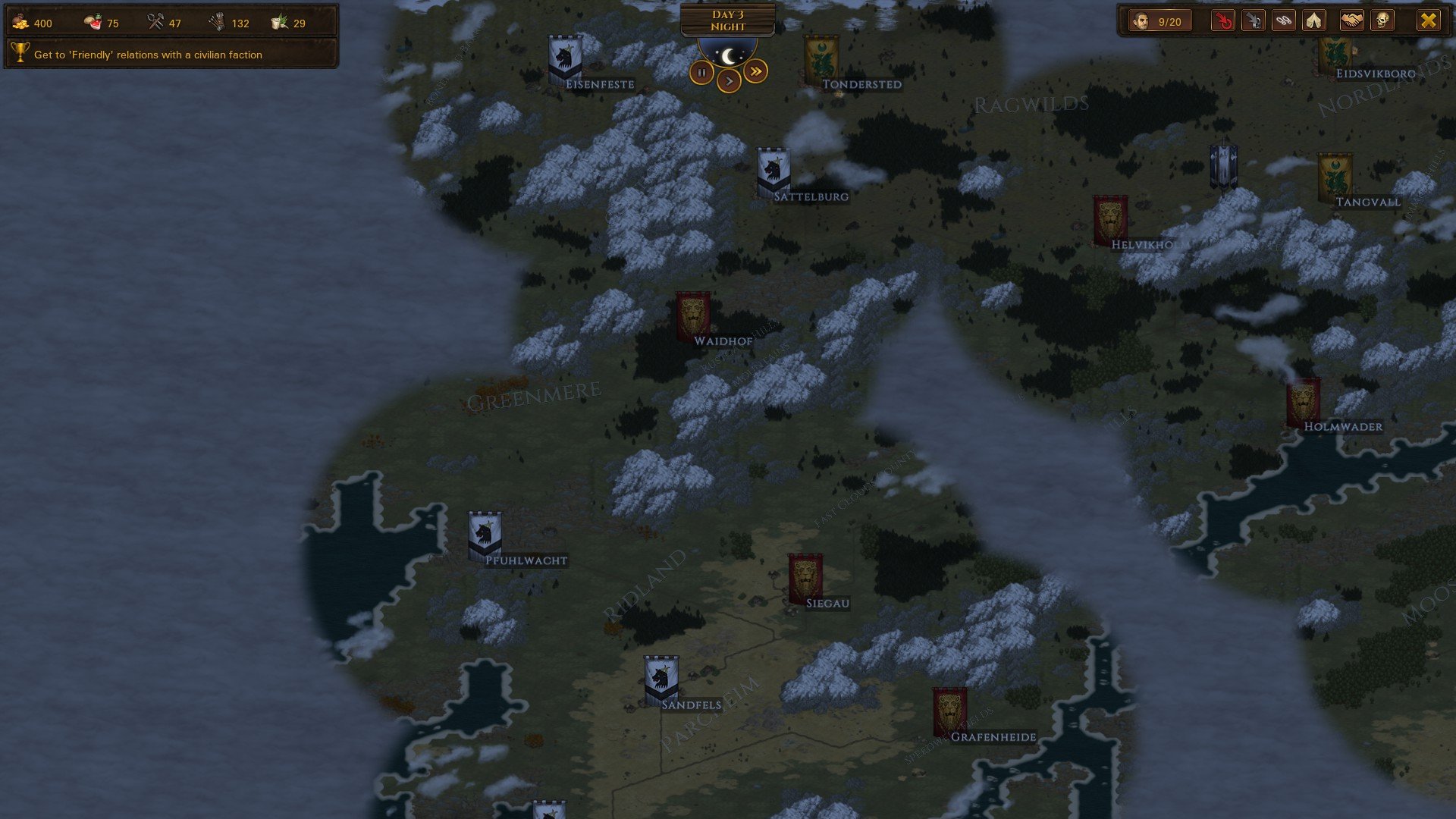 The first casualty in this band wasn't one of the founders, but one of a small group I recruited in a town called Tangvall to reinforce my band. Each town in Battle Brothers has a small pool of men looking for a band to join. Depending on their background, they have different skills and perks and demand different wages. Hans is fittingly a brawler, which means he's tough and gets a bonus to unarmed strikes. Nothing will make punching an orc a great idea, but it's cheaper than buying a spear to arm him. Ruthard the Student, the aforementioned casualty, gained experience faster, but wasn't very tough so I gave him a bow. He performed admirably against slow-moving brigands, but when we were contracted to rid hills near Grafenheide of dire wolves he was mauled by a fast-moving wolf who got the first turn and closed on him before he could fire a shot.

When battle begins in Battle Brothers, every member of your band and every enemy takes their turn based on their initiative. Initiative can be increased when your men level up, and for my bowmen and crossbowmen it's a must: high initiative means they can attack early, before their friends get in the way. In the event, nobody was faster than the wolves. What this system means, though, is that your men begin as generalists whose roles become more specialised as they level up, and their stats better suit the use of particular weapons. Anton was given a crossbow because that's what was in my band's inventory at the time, but now that he's a higher level I wouldn't dream of handing him a sword even though it's technically possible. 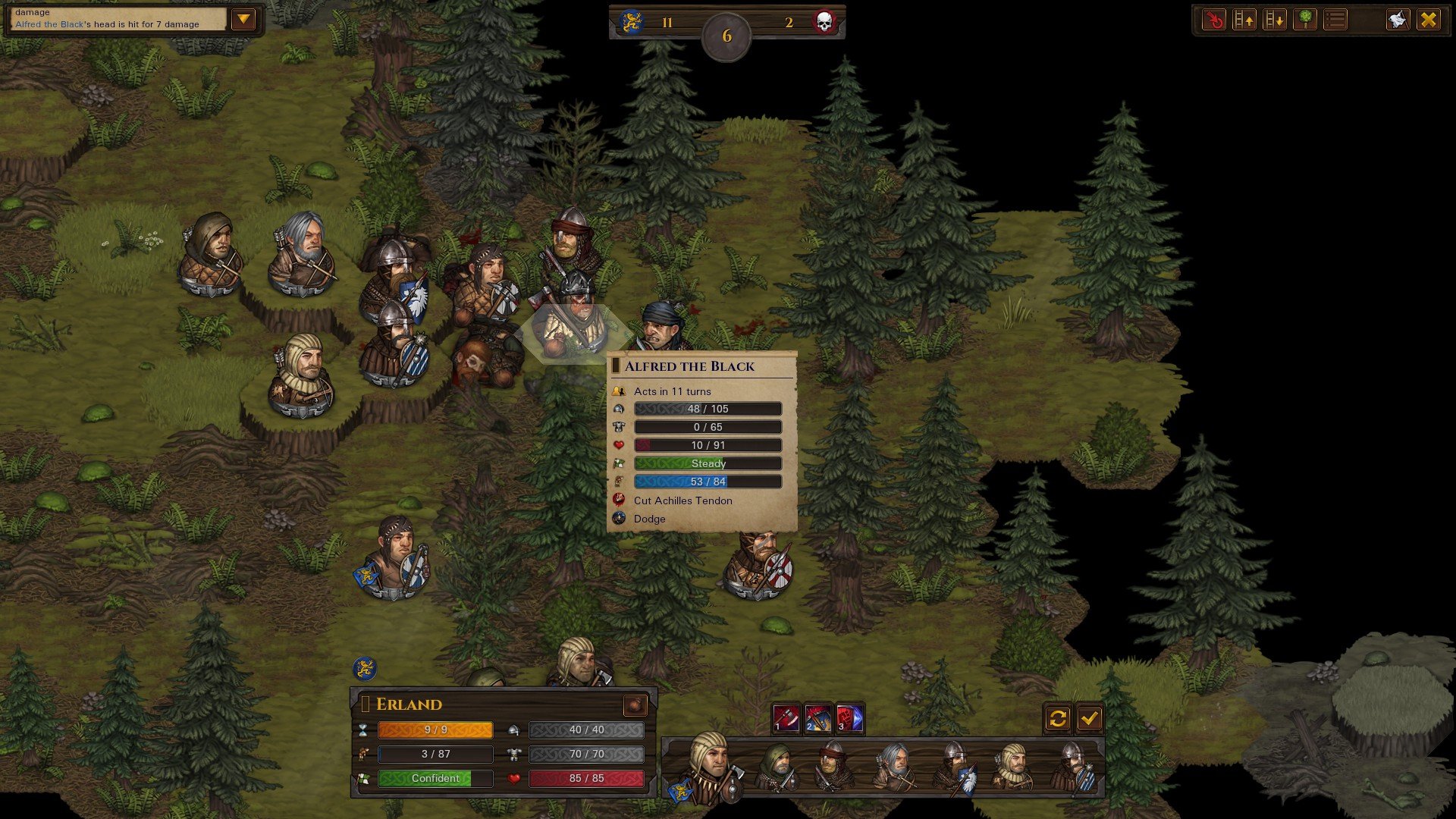 Death is routine in Battle Brothers, but you probably can't afford to treat even inexperienced men as disposable. In addition to a daily wage, every new hire demands a lump sum payment commensurate with their background. The effect is that the band hires people to fill roles or replace the dead, rather than merely to amass men. The Stalwart Standard has a hardcore of veterans, including two founding members, Asgeir and Alfred the Black, who are tough enough and well enough equipped to take a hit and ensure my less experienced men don't die in their first encounter.

Knowing the role each man performs is important to determining battle formation. When I first played Battle Brothers, I was convinced I solved the game and that equipping everyone with spears and bows was a winning strategy in all cases. In fact, each type of weapon has a particular role in combat: clubs can stun enemies who would otherwise cut men down, axes can destroy shields, and already defence-oriented characters with shields can further boost their block to absorb hits.

My men in Battle Brothers are as much a football team as a squad in other tactics games. Everyone has a role and the goal of the first turns is to get men into position. Swordsmen should face un-armoured opponents, hammer-armed men should face opponents with heavy armour, and bowmen should be on high ground. 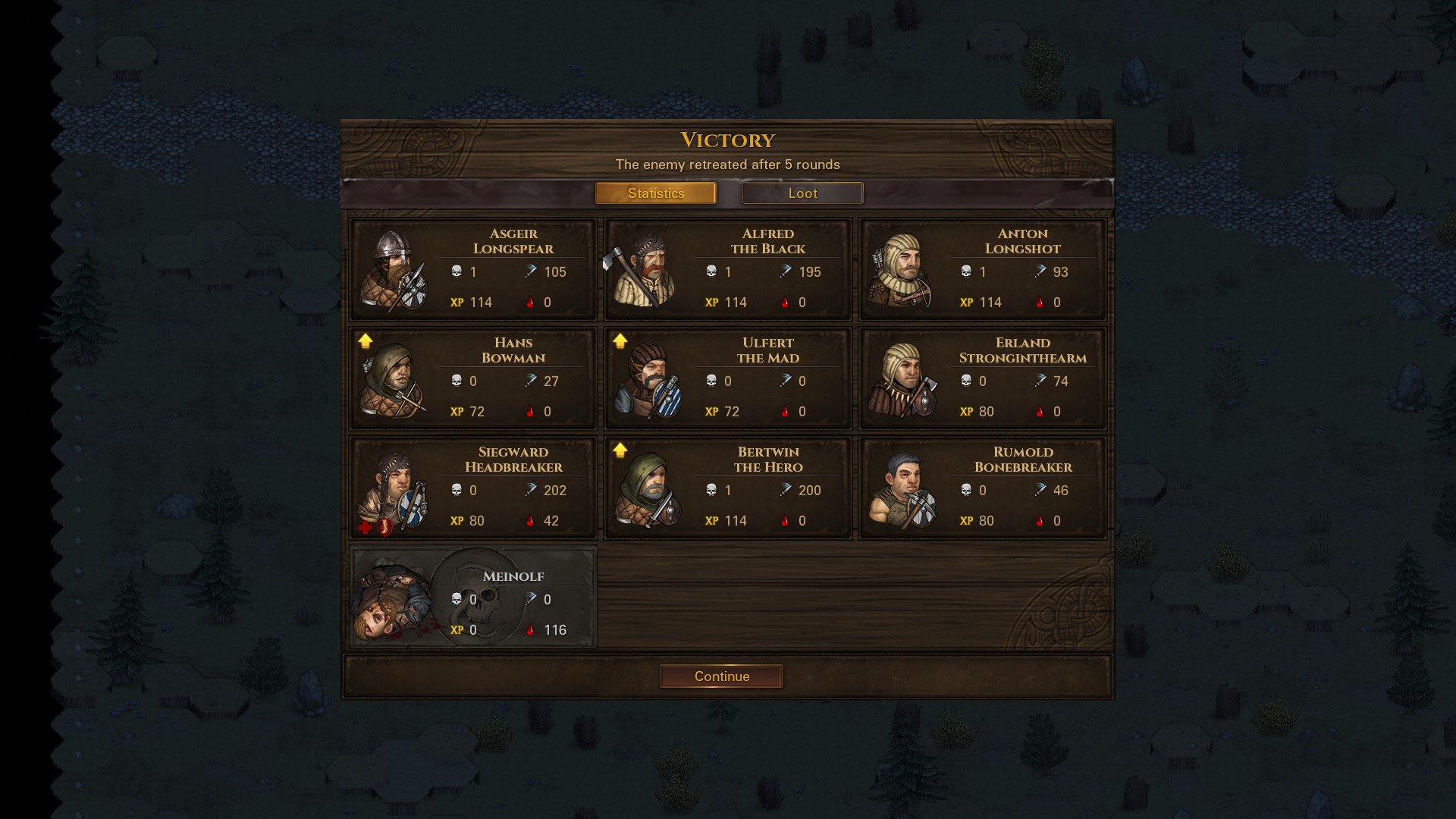 The Stalwart Standard were tasked with clearing out a graveyard for a gargantuan sum of money. If they accomplished the job even mostly intact it would be a great victory. The undead they faced caused most of my previous losses in Battle Brothers. Partially, that's because the game fails to communicate their ability to resurrect almost on the spot they die, which ensures you'll be wiped out at least once, but even after that trick they're a tough opponent. This time, I accomplished it without losing a man.

Zombies are lethal in combat but they're both slow and fragile. My men raced for a long ridge and blocked access up, forcing the wave of undead crashing against them to attack uphill. Attacking down in Battle Brothers with melee or ranged weapons confers a significant advantage, and attacking uphill is a significant disadvantage. It's important, if possible, to secure the high ground. Against the undead I secured all the high ground partially as a result of lucky random map generation, but partially also because I knew the capacities of my men and how far each could move and where each would be best positioned. Hans was the only man to suffer an injury when a zombie resurrected on the ridge itself and in so doing pushed him back. It's a testament to the extent to which a good formation can mean the difference between victory and death. When I claimed the reward, I had enough to fund my band for ten days, easily a record. Needless to say I bought the men a drink at the tavern after we collected our reward. 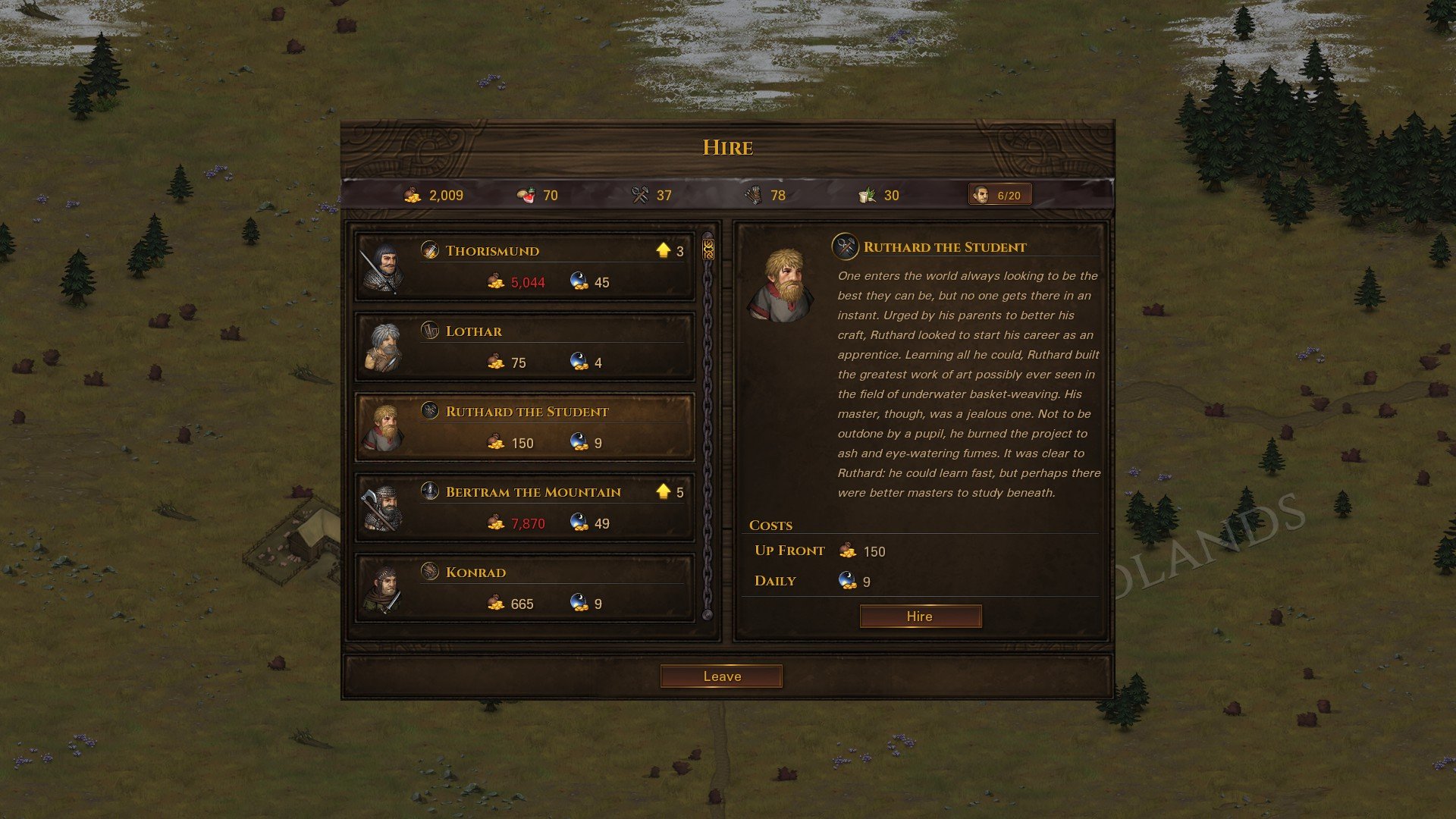 Battle Brothers is exceptionally good at making you feel a connection to characters who are, after all, little more than a drawing of a head and torso. No one has any voiced dialogue, the men are randomly generated for each new band, and while the game's visual consistency might be admired, it does make it easy to mistake one angry Germanic man for another. Its success is the result of small details which make the role of mercenary captain more credible and consequently the men more valuable. The ability to negotiate pay with your employers, the sparse but well-written dialogue with your men, and of course the button in the tavern which allows you to buy a round and improve their mood.

As I mentioned, two of my men from the very beginning of the campaign survived the whole duration: Asgeir and Alfred the Black, the latter worse for wear. In a town in the far north, I took a high-risk job to clear out a bandit camp I knew would be fortified. The battle started well: we fought in dense forest and my men were able to block the passages between an impenetrable line of trees and kill two bandits separately. Eventually, however, a bandit with javelins moved forward and complicated my strategy by throwing a spear and knocking out the weakest member of the band. Alfred the Black likely saved many of my men from being pelted to death when he charged forward, axe in hand, and cleaved apart the javelin-armed bandit. 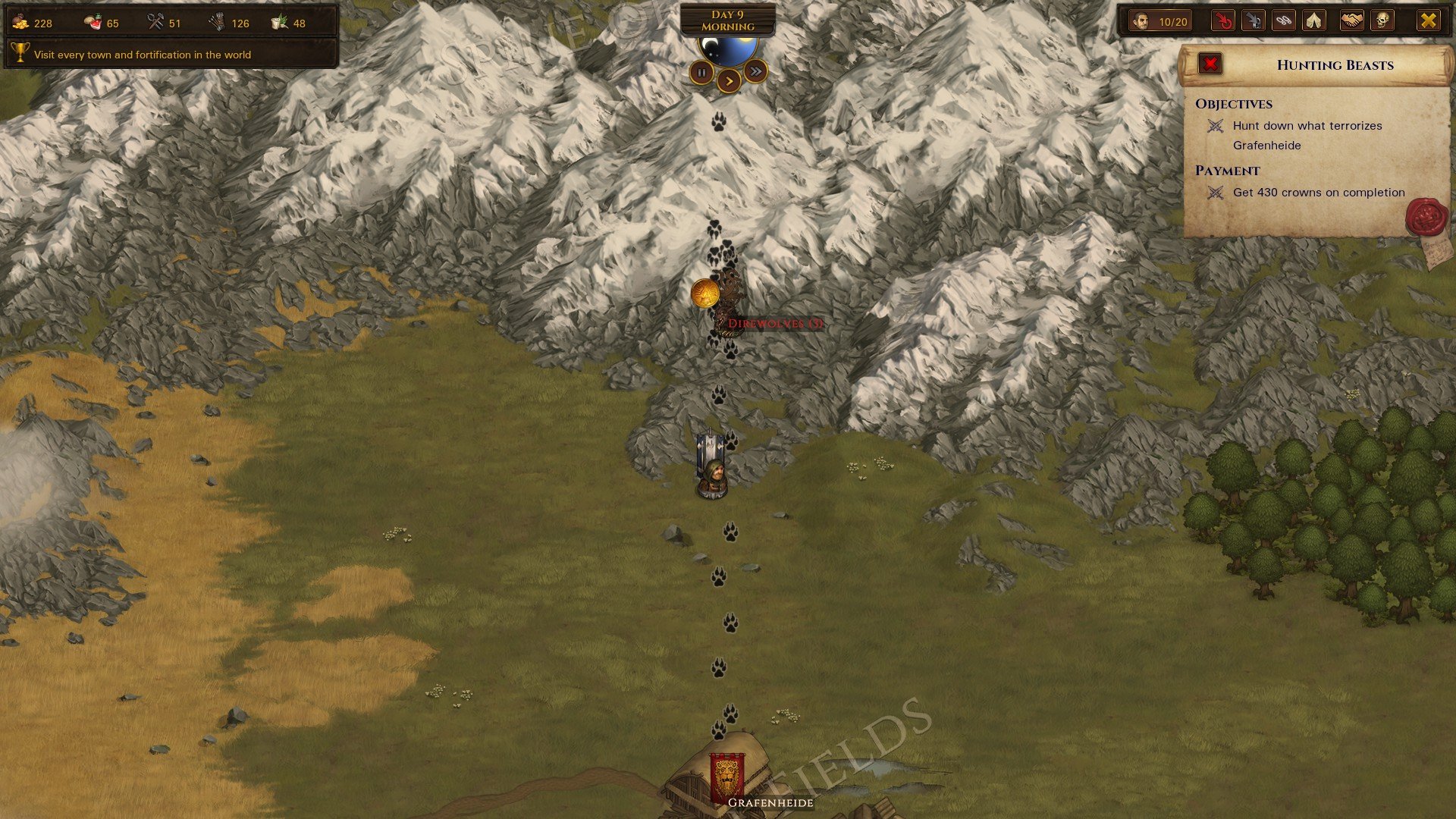 He was, as far as I could see, killed the following turn. However, in Battle Brothers there is a chance that even when one of you men is knocked out of the fight that they don't die but suffer a permanent injury. Alfred was lucky enough to sustain the injury 'traumatised' at the end of the fight which vastly reduced his initiative and resolve. Keeping Alfred cost seventeen gold a day though he never took the field again. It was, I decided, seventeen gold worth paying. In other bands you might be dismissed for injury suffered in the line of duty, but that's not how we do things in the Stalwart Standard.

Battle Brothers masterfully links its tactical and strategic layer to realise the fantasy of managing a mercenary company. If I'd run out of jobs to do or had taken a bad fight that meant I needed to hire new men, I might have had to let Alfred go when my funds were low. Luckily his injury, and the injury of the man hit with the javelin, turned out to be the last catastrophic event of the campaign. By the end, I was commanding a cohort of veterans who were strong alone, but whose success had more to do with my getting to know how to use their skills, deploy and manoeuvre the men collectively. Battle Brothers excels at enabling the player to build a team. Mechanically, that means your men have particular roles in combat. Just as important, though, are the steps the game takes to allow players to build an identity for the team, with a name, symbol and characters. Many members of the Stalwart Standard died of course, but the company lived on. A few of the band even live on in retirement right now.