I've been flitting between lots of different VR headsets over the last month or so, in my quest to find the best VR headset of all. But who needs to spend upwards of 400 quid when the £12 / $15 Google Cardboard can also be used to play big SteamVR games like Half-Life: Alyx?

Yes, you read that correctly. Thanks to the magic of VRidge, an app that streams VR games on your PC to your phone screen, you can now enjoy all of today's best VR games for a fraction of the price. Well, sort of.

Getting Half-Life: Alyx to run on my Cardboard wasn't a problem. After downloading the VRidge app on my phone and its accompanying RiftCat app on my PC, the two linked together almost instantly over Wi-Fi (you can also do it by USB if you prefer) and I was right there, staring at the horrifying Valve man within minutes. It was a pretty impressive sight, too. While the Cardboard's rudimentary lenses often gave me a bit of double-vision at times, the game's opening screen was just as ominous and foreboding as it was on a proper VR headset like the Valve Index. The problem was working out how to move and interact with its menu screens.

In case you're unfamiliar with it, the Google Cardboard is really just a simple VR viewer when you get down to it. It doesn't have any controllers or input controls, and the small press-in button on the top of the headset only re-centres you when you need re-orienting. Indeed, when Google first released it back in 2014, you even had to put it together yourself when it arrived, a bit like Nintendo's Labo toys for the Switch. These days, it comes ready-made in a small cardboard box. All you have to do is slot your phone in and you're away. 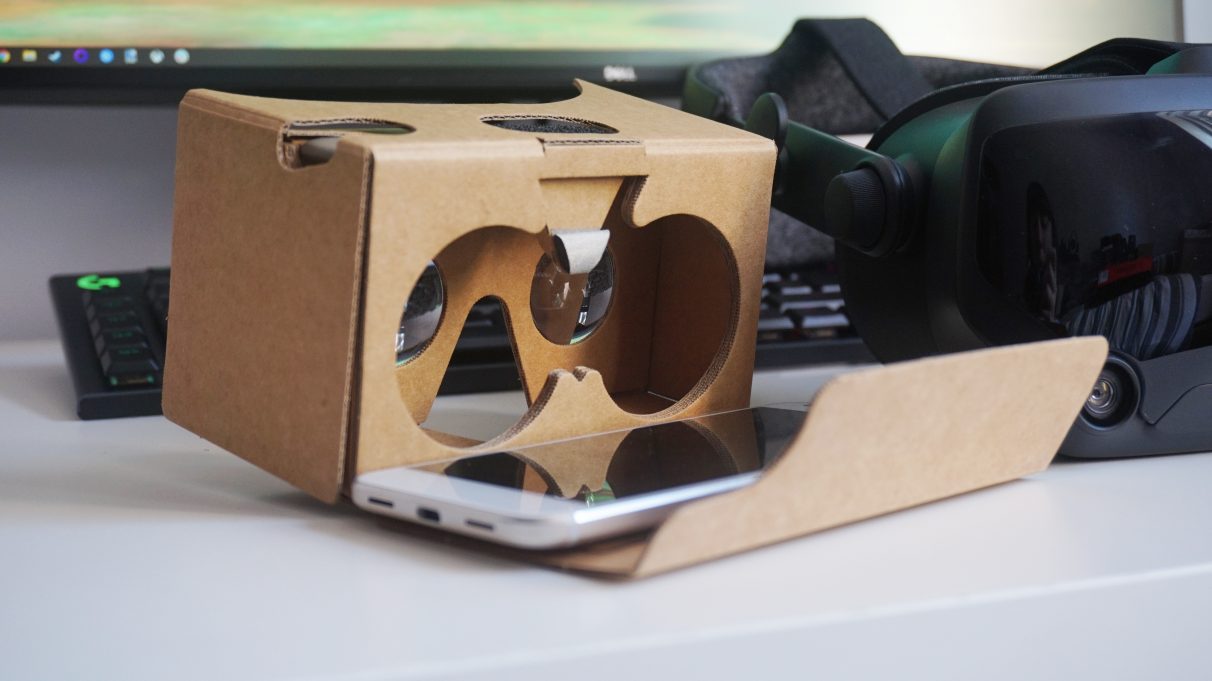 Fortunately, VRidge supports a number of control schemes, including being able to use a gamepad, mouse and keyboard, and even another phone's touchscreen as a makeshift mobile controller. You can also use the simple wand controllers from mobile VR headsets like the Samsung Gear VR and Google Daydream, but they only work with their respective headsets.

Of course, when the Google Cardboard also doesn't have any kind of head strap, this presented another problem. How do I hold it up to my face and use a controller? The solution? Put the Cardboard on the edge of my desk and sit on the floor. Oh yes, we're in business.

The next step was figuring out how to map VR controls to my Xbox 360 pad. I did try using a mouse and keyboard, but the latter often got confused with what was going on on my desktop, so using a gamepad was definitely the way to go here. Alas, the free version of VRidge only offers old Vive wand controllers for you to reconfigure, which you may recall was the main reason why I only gave the HTC Vive Elite Cosmos a measly one out of five in my best VR headset for Half-Life: Alyx article. The tracking was fine, but the Vive wands' trackpads just weren't up to the task of keeping up with Half-Life: Alyx's complex and fast-paced movement options.

And so it proved with trying to get them to work on an Xbox 360 pad. Try as I might, I was only able to get it to move forwards, backwards and side to side. I couldn't turn round, and I couldn't change direction, either. Even moving the Cardboard around didn't help, which meant I was perpetually stuck in those four planes of movement.

I was able to map the hand controls correctly to the d-pad (just about), but even this felt like a bit of a fudge. The simple act of selecting the Continue button on the title screen felt like an monumental challenge of fine motor control, and don't even get me started about trying to aim my gun at a lone Combine. This was pretty much impossible - if only because one step to the side on their part was all it took for them to outmanoeuvre me.

However, it turned out I had the upper hand all along. In all my faffing about trying to get Alyx to shift her gaze even half a degree to the side, I suddenly found myself inside the nearest wall, completely and utterly safe from the storm of Combine bullets that was raining down just three feet away from me. I'd just clipped through the entire thing, and the thought hit me. If I make a beeline straight for the end, the Combine won't be able to even touch me! Take that, suckers.

Alas, just as I was about to plough forward in a completely random direction, my VRidge session came to an end and kicked me out. The free version only gives you ten minutes at a time, you see, and there was no way I was going to stop and start over and over again like some mad, ghostly robo woman just for the sake of seeing if I could get to the end quickly.

Still, I was impressed that I was even able to get Half-Life: Alyx running at all on the Google Cardboard, and I'll be intrigued to see if I can successfully get any other SteamVR games working on it instead. You should, of course, get a more sophisticated VR headset like the Oculus Rift S if you really want to play Half-Life: Alyx properly, but I'd recommend mucking about with the Cardboard if you've got one, if only to get a sneaky glimpse of what's behind Valve's meticulously crafted curtain - or, indeed, the title screen's city gate, which it turns out is just a grey void.

I have also seen the face of the Valve Man and it is TERRIFYING.