At the end of my first day at EGX, I looked at my notes. I'd jotted down thoughts about eight games, and all but one of them revolved around a cute animal.

Does that say more about me, or the volume of developers that place animals at the centre of their attempts to lure in players and press coverage? Let's set that question aside for now. We've got animals to review.

(That's Dave up there, by the way. I meant to take a photo in the Phog bed but forgot.) 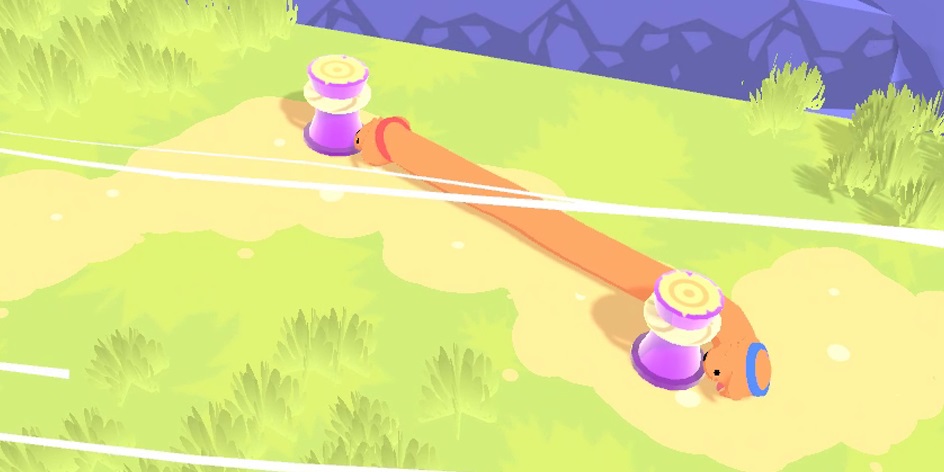 There's some degree of metaphysical confusion over whether this two-headed quadruped constitute one canine or two, although the literature is sparse enough that observers can arrive at their own conclusions. Each end of a phog does indeed seem to exert a will of its own, but they posses an admirable capacity for cooperation when confronted with simple puzzles. One end of a phog has been seen, for instance, to latch on to a water spout so that its counterpart can spew life-giving H2O over distant plants.

Once grown, these plants allow the phog(s) to traverse onward and fulfil their (its) primary life function, which is believed by biologists to involve feeding acorns to giant worms. This changes once a phog arrives in bedtime world, at which point their role transitions towards serving as an alarm clock for giant worms made of felt.

Phogs deserve admiration for the commendable role they play within their communities, although it should be noted that they rudely disregard the rules of physics that bind the other animals seen here.

The amazing frogs in Amazing Frog? 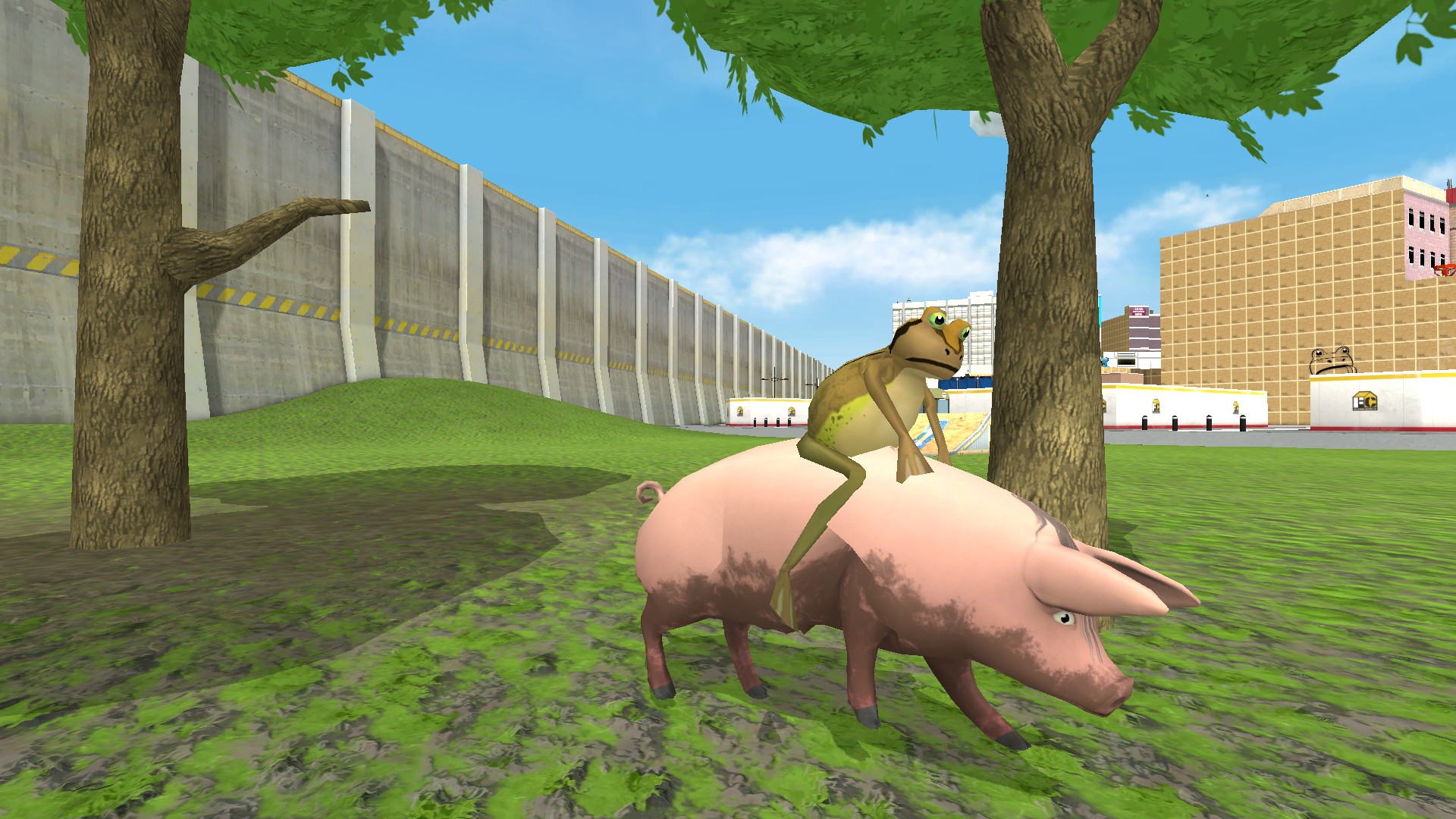 If the question mark at the end of Amazing Frog? is meant to cast doubt on the amazingness of the frogs contained within, then it is superfluous. These frogs have got tenacity. They've got gumption. They won't hesitate to plough through pedestrians in a commandeered mini they found at the top of a car park that they reached via a canon.

Drawing inspiration from previous attempts at goat simulation, the frogs in Amazing Frog? treat their version of Swindon as a buggy playground where they indulge in various inane activities. Their version of Swindon is populated by frogs and surrounded by fifty foot high steel walls, so that's basically justified.

You could interpret their cold, amphibious glares as reflective of a psychopathic disconnect from the Swindonians that suffer beneath them. But then they'll go and play with radio-controlled cars around a little racetrack, and you'll struggle to hold their crimes against them.

The sticky cats in Sticky Cats 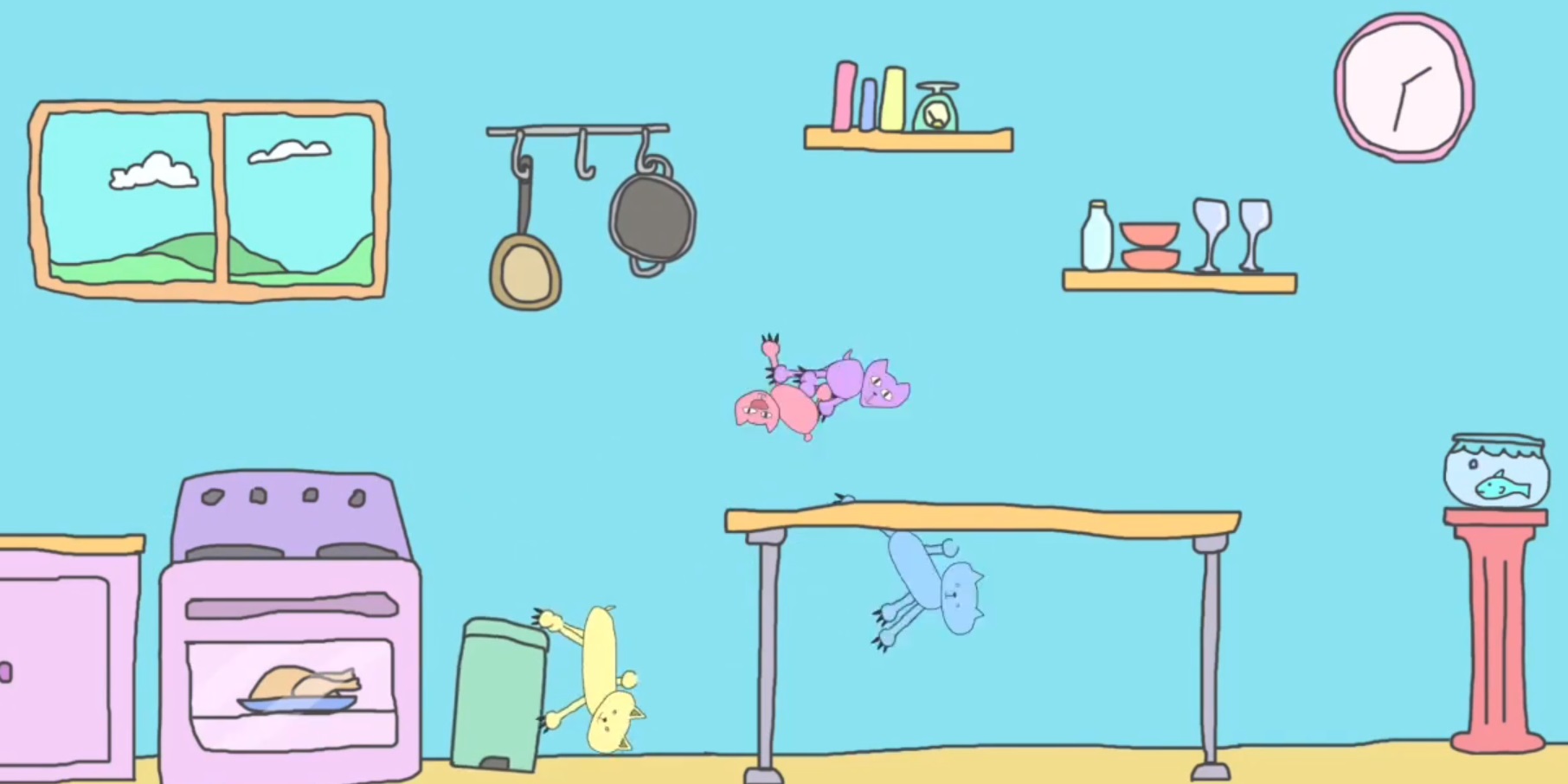 I told an embarrassing number of people about Sticky Cats over the weekend. They're fabulous.

Don't ask me about the physics, but these boys will stick to anything. Floors, walls, ceilings, environmental objects... but most notably, other cats. That can be great if you find yourself without a fish, and need to drag your rival kitty away from the window before they can escape with it. Less so if you're the one a whisker away from freedom.

The best thing about sticky cats is that they come in all shapes and sizes. There's some advantage to spawning in as a tiny kitten at the start of a round, though it's debatable whether being a little more nimble makes up for getting swatted around by tabbies ten times your size.

I've come to the conclusion that adhesive can improve the quality of every pet. I'm sure I've got some PVA around here somewhere. 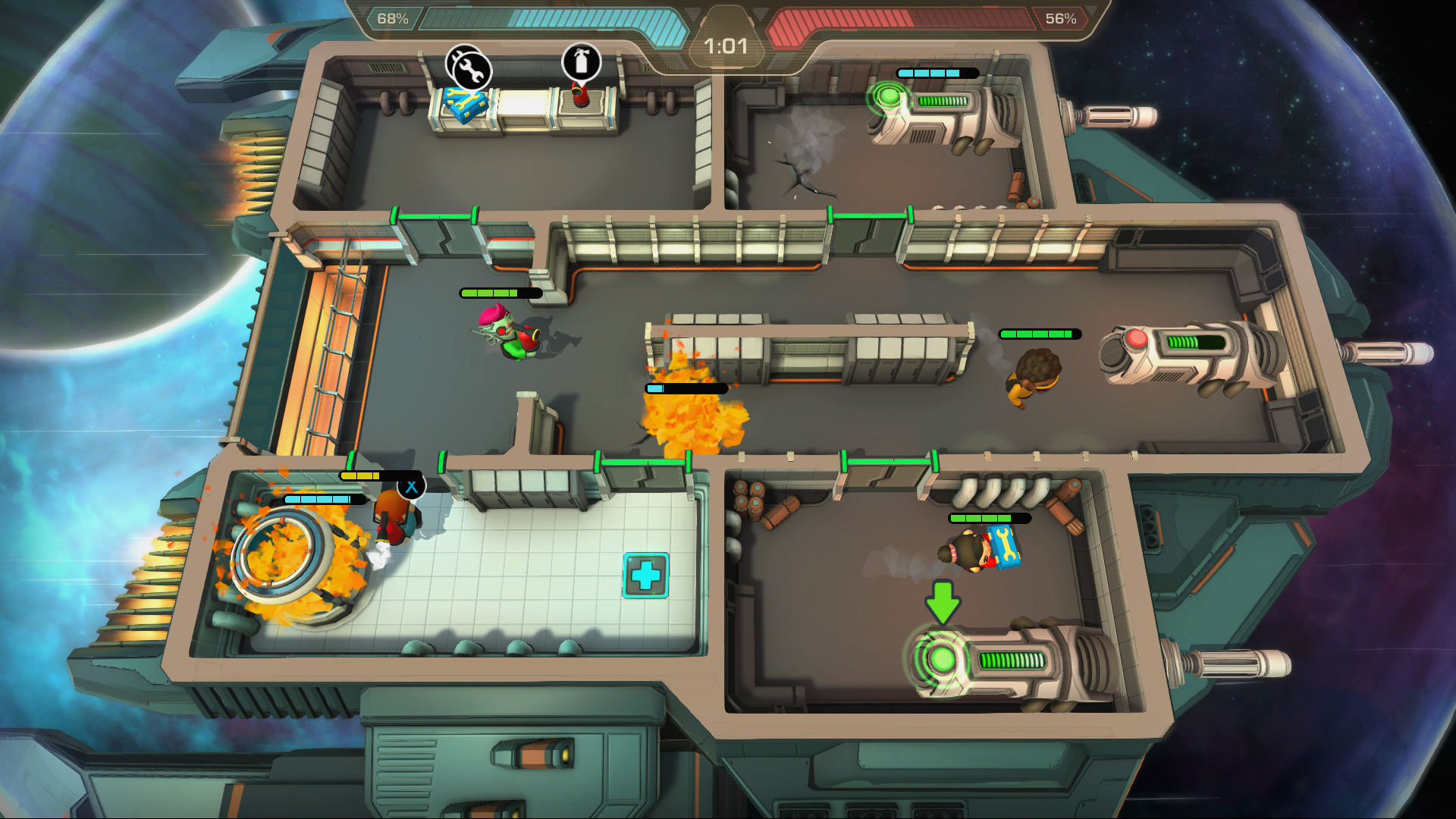 This cat behaved like a normal human, which inevitably took away a lot of its charm. It was good at putting out fires though.

(The game is a lovely cross between Overcooked and FTL, by the way. It's rad and out real soon.)

The non-existent mice in Mice On Venus 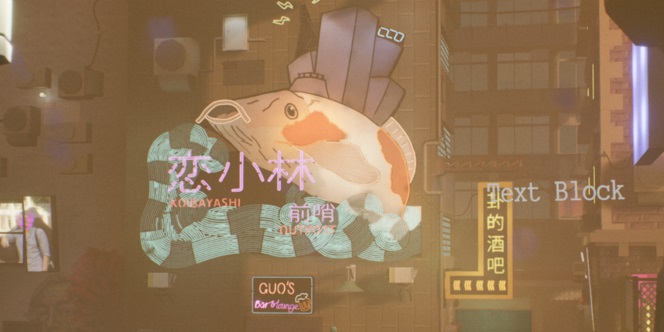 Turns out there are no mice on Venus.

The eagle from Eagle Island 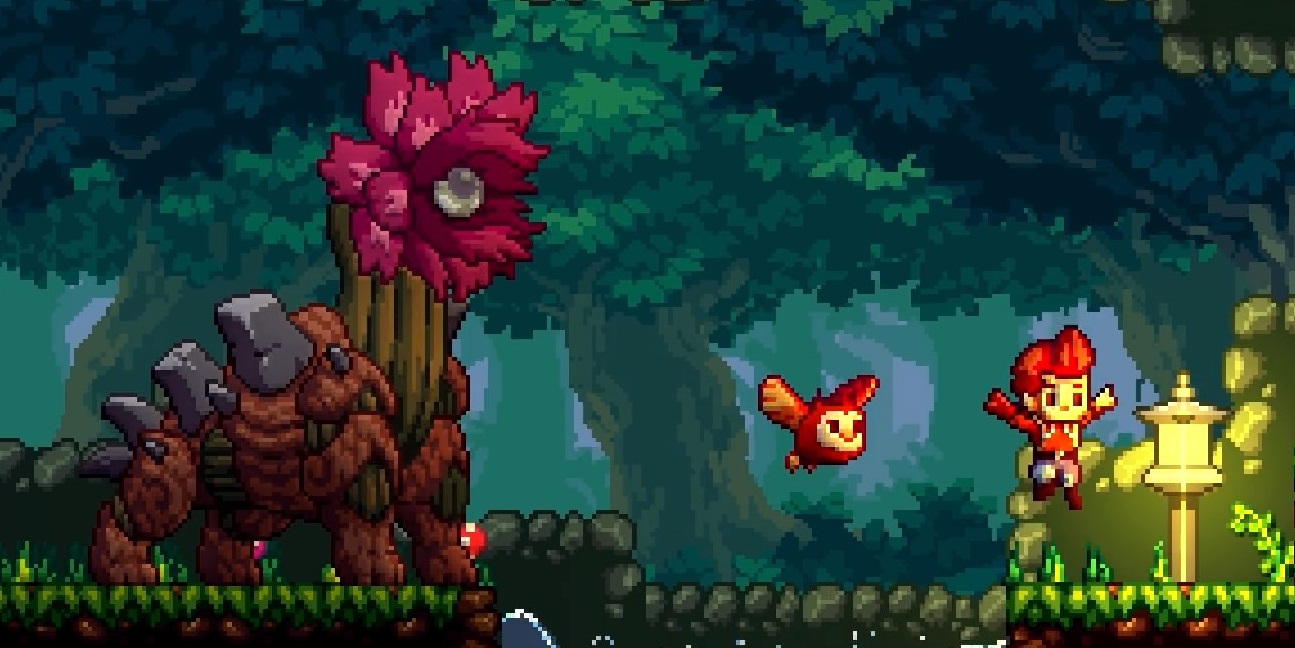 That looks like an owl, right? I even wrote the name of this down as Owl Island and had to take an incredulous walk back to the booth when Dave told me I was wrong. Anyway, the eagle can use special element themed attacks and be jumped on. He's the star of this roguelike platformer - you attack stuff by telling him to flap at them rather than dirtying your own hands. I think the eagle is ok with this relationship, even though it's hard to see what he gets out of it.

But talking about Dave...

The Goose from Untitled Goose Game (according to Dave, because I didn't get a chance to play it)

Geese are normally quite intimidating water-dwelling beasts, but the goose in Untitled Goose Game is a loveable scamp. Causing mischief for the gardener who just wants to tend to his well maintained garden, the goose has its own to-do list, from gathering enough items for the picnic blanket, to dragging garden tools to the lake for the sake of rhyming jokes. Sneaking around the garden is satisfying, particularly when it culminates into honking to make the gardener drop his hat.

No game at EGX this year made me smile in quite the way that Untitled Goose Game did. The hooligan goose has become a bit of an office favourite for us at RPS and we hope to see more of it soon.

The puss from Puss! 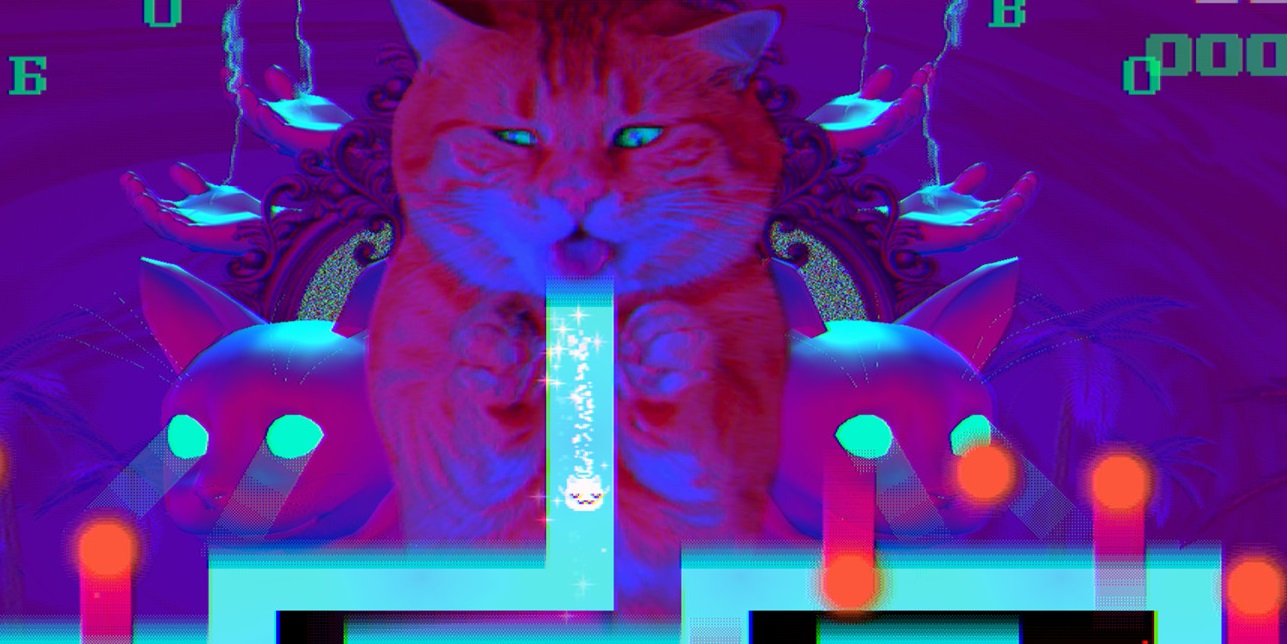 The puss from Puss! mostly just exists as a 2D head, though between levels it gains an extra dimension and does a spiralling somersault type thing. It seemed to like being dragged around each level, though was less impressed when it had to do battle with a demonic dog summoned by moggie cultists.

An amorphous blob of birds in Small Talk 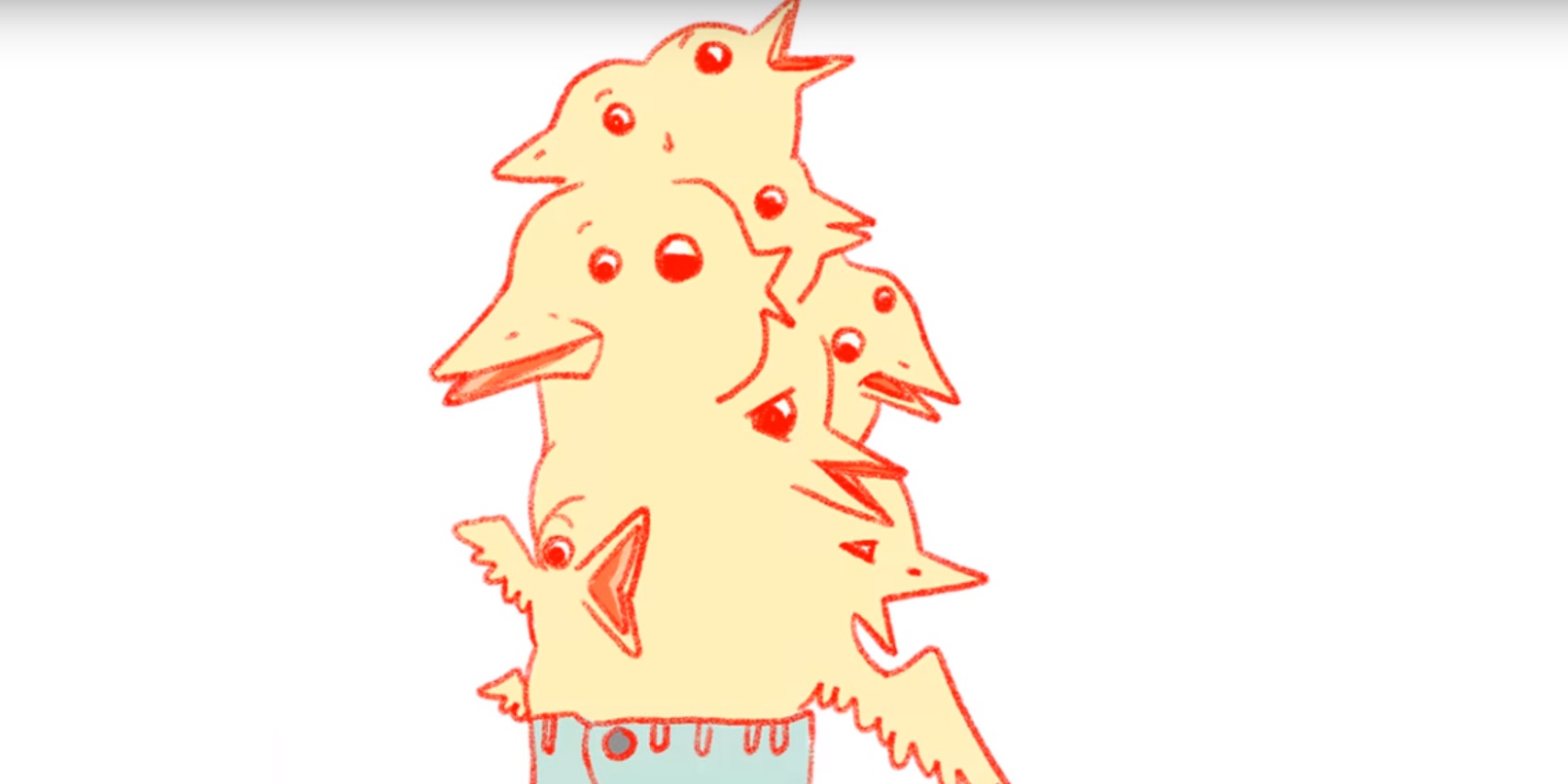 This beaky blob Was welcoming, but didn't seem particularly interested in talking to me. They were the host at a party aimed at taking people's minds off the imminent end of the world, so I suppose they wanted to make sure they were free to greet other guests. Those guests included a man with a cooked breakfast for a head, a beehive, a naked bow-wielding stork/man hybrid and an onion wearing trousers with goldfish swimming about in them.

The doggo from Doggo 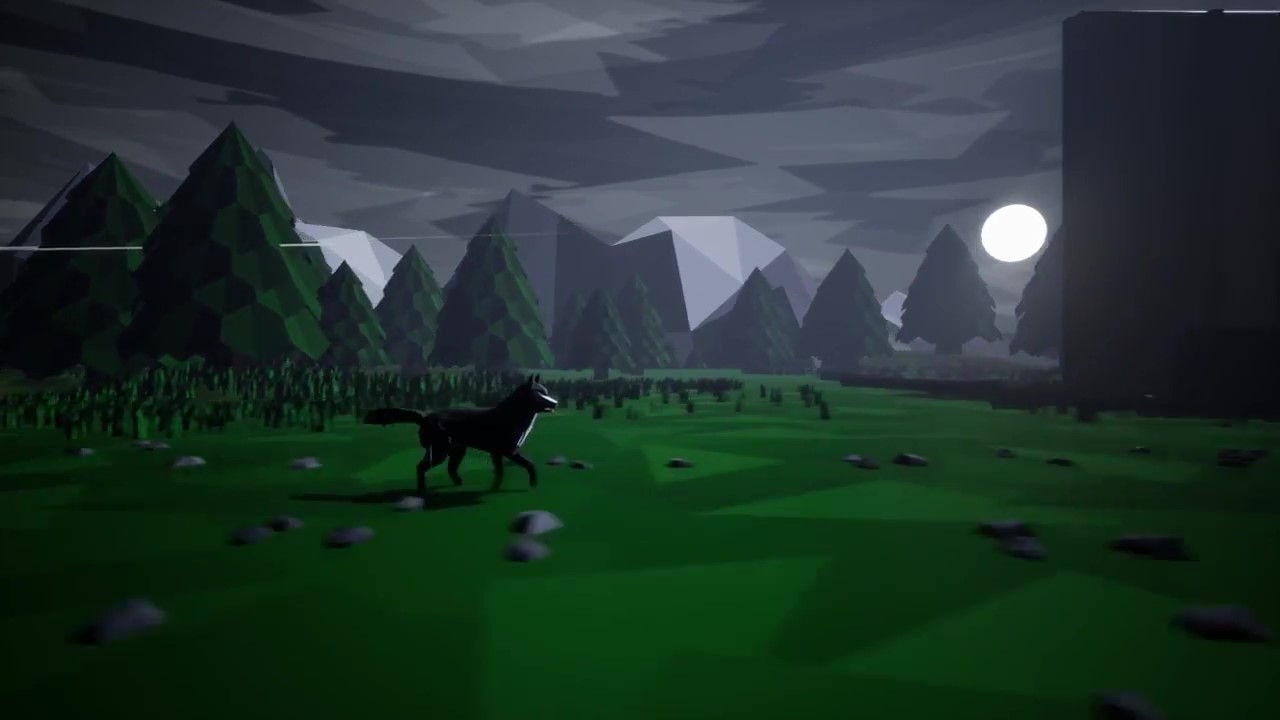 A top doggo. Nicely animated. Very good at running away from bears.

The pug from Double Pug Switch 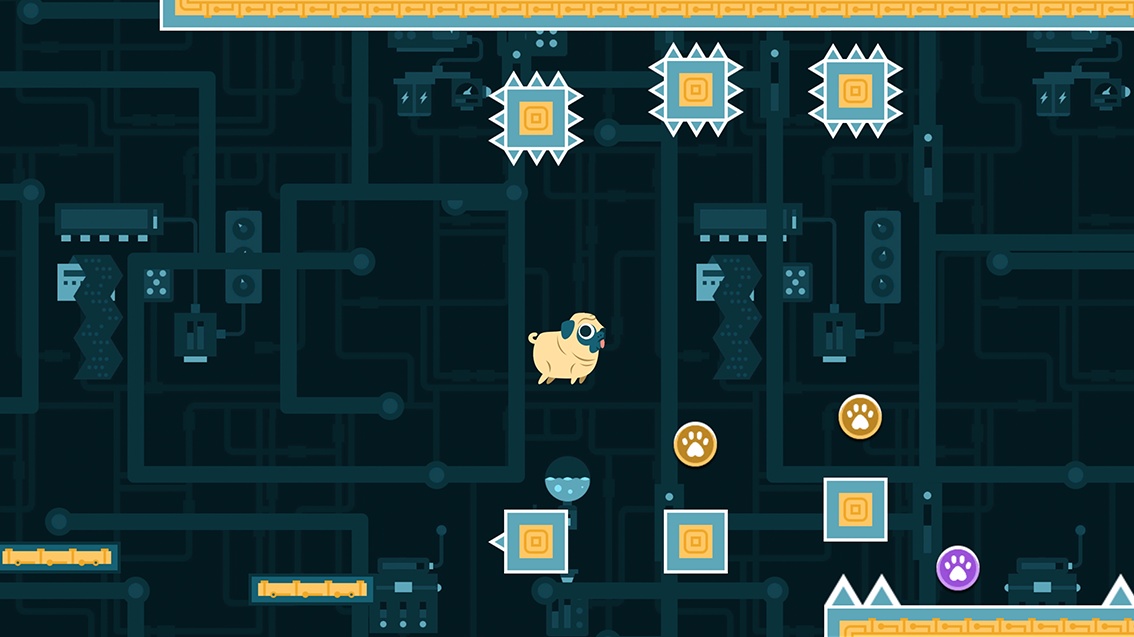 Irrepressibly enthusiastic, despite getting impaled on spikes every few seconds. 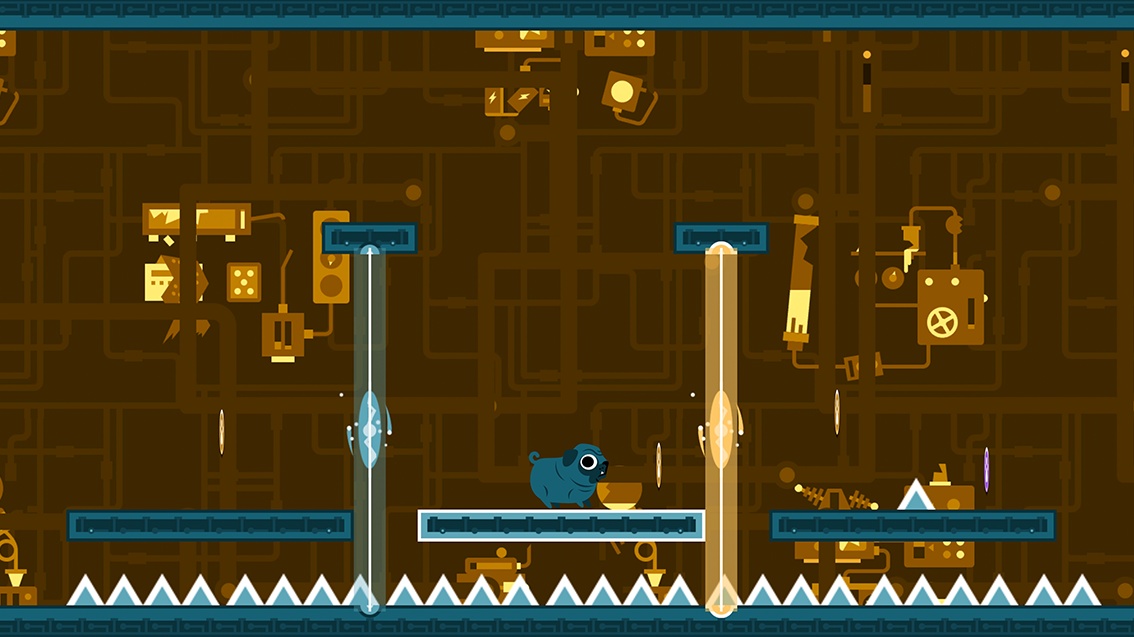 (Oh, this is only coming out on Nintendo nonsense. Sorry.)

The many many sea creatures in Beyond Blue 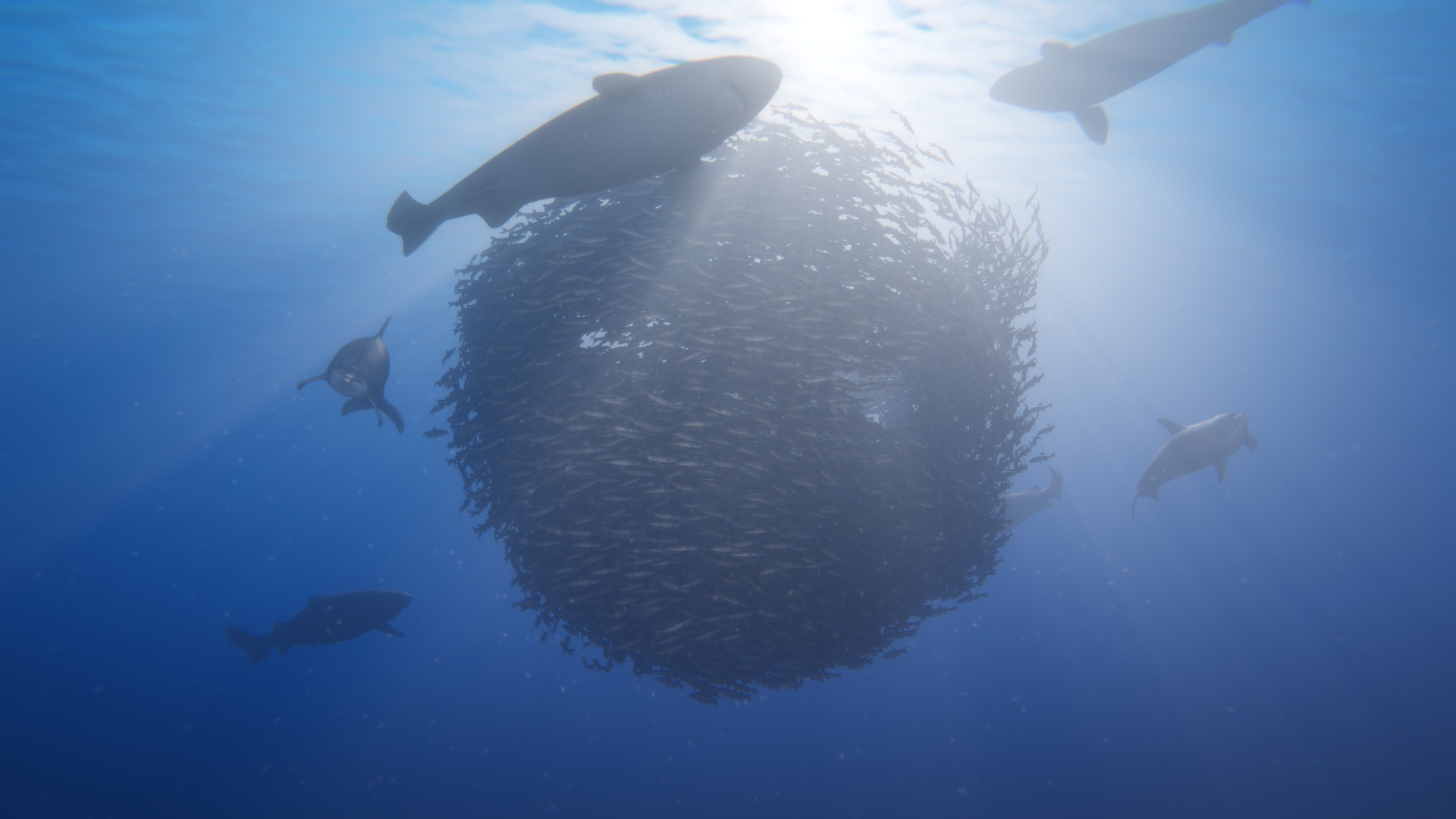 Beyond Blue features a panoply of creatures, all with their appearance and behaviour accurately modelled thanks to two scientists working with the devs.

There was a turtle chomping away on a jellyfish. He looked happy, unlike the jellyfish, which just looked like a jellyfish.

A manta ray, which weighed 300kg and conveyed an unusual sense of urgency for an animal moving at a mere 1mph.

A sunfish, which looked like an idiot and didn't seem to be in a hurry to go anywhere or do anything. I don't understand how sunfishes are real.

An octopus, which was camouflaged and then squirted me with predator-attracting ink. A bad octopus.

The last thing I saw was a pod of sperm whales, including a baby one with diseased skin. I will give the best animal award to that baby.

The fox and rabbit from Ninjin: Clash of Carrots 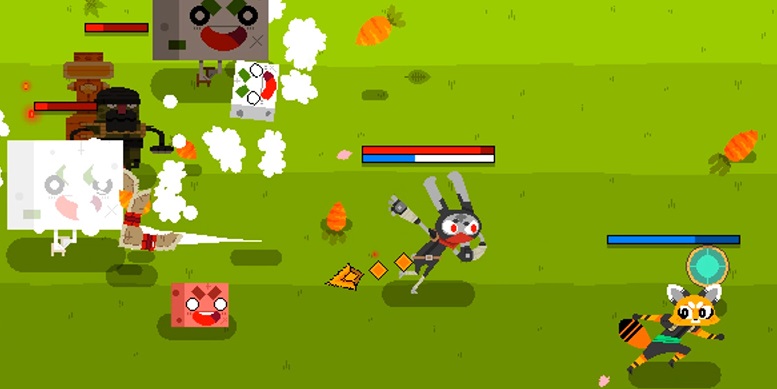 This is a fox and a rabbit, bonded by their mutual love of carrots? I'm not sure what was going on here. They seemed unpleasantly angry all the time, apart from when they destroyed a box containing a friendly rabbit. Then they looked kind of guilty, but in a smug sort of way. I can't abide tittering over a casualty of carrot-based warfare.

A horse and some ibex in Assassin's Creed Odyssey 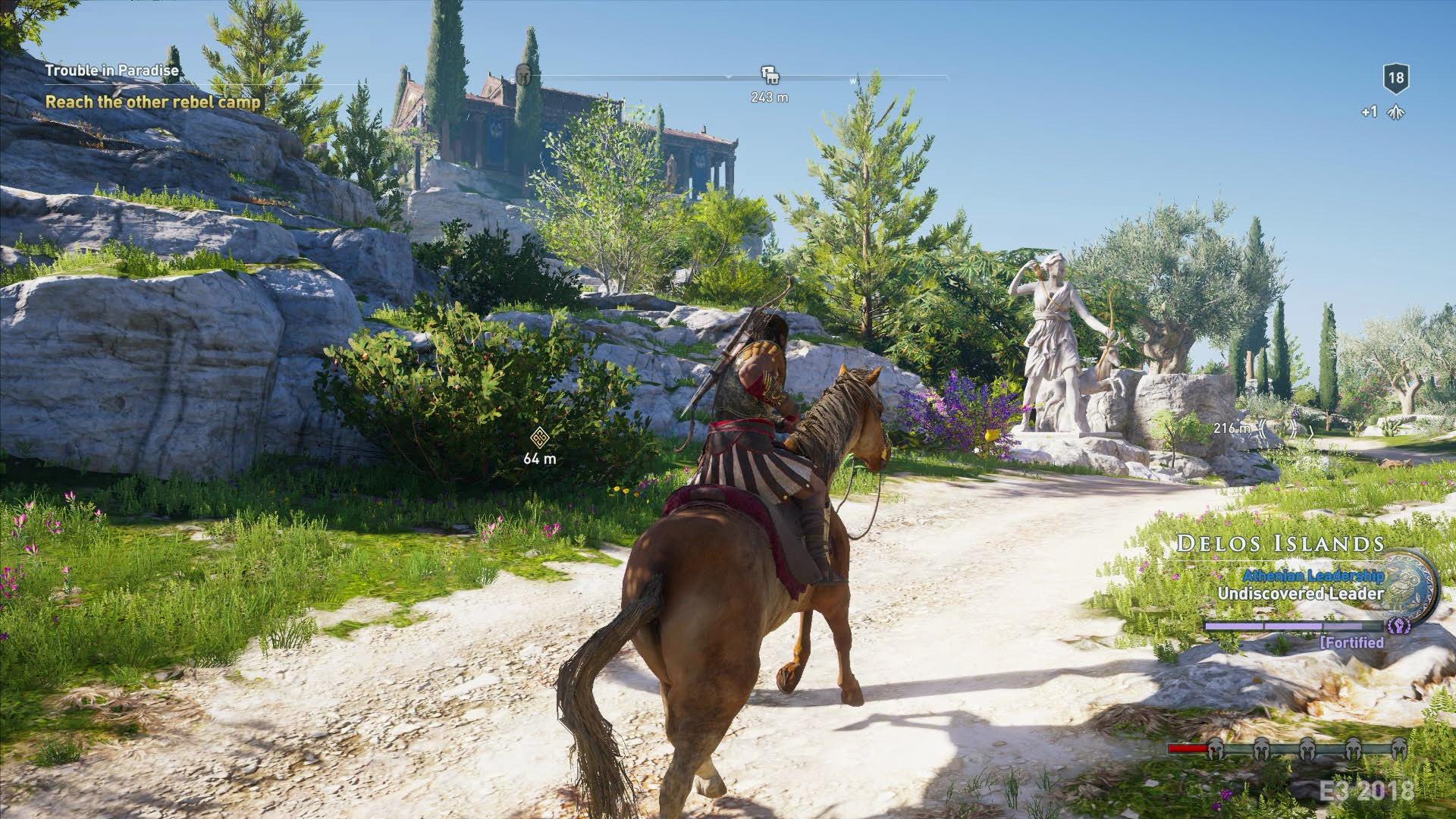 I'll be honest, the horse was nothing special. But it did get stolen by a woman immediately after I agreed to go hunting with her. I had to pinch another one to catch up.

I then fired a few arrows at some ibex while she flirted with me, and once I'd killed the requisite number of goats she asked if I wanted to go to a special bonking cave she knew about on a nearby beach. Those weren't her exact words, but it didn't matter anyway because I wasn't about to fill the 40-inch screen in front of me with Grecian gonads.

Immediately after wrapping up that quest my character was rude to a beggar, despite the way they were in obvious distress. The horse and those ibex played their parts well, but Alexios is the real animal. 3/10.