Imagine: you're invited to the Met Gala and the theme is 'Haunted Moon'. You know Rihanna will be a stunning spectacle. You concede you cannot beat Celine Dion's glimmer or gags. You assume Marilyn Manson will do some gory 'Le Voyage Dans La Lune' lark with a model rocket stuck in his oozing eye. It's a given that Kanye West will flout convention and wear jeans. If you really want to stand out with 'haunted moon' couture, mate, you couldn't do much better than some of the astonishing armour coming when Destiny 2 returns to our haunted moon in the Shadowkeep expansion.

Shortly after last night's announcement that Shadowkeep and the free-to-play New Light relaunch are delayed from September to October 1st, Bungie posted their customary This Week At Bungie blogblast to talk more about... I'm not quite sure, because this picture of some Shadowkeep armour was right at the top and I couldn't let myself scroll past it.

To understand the style, you need to understand what Bungie did to our alabaster friend. In Destiny it's filled with the Hive, an alien species who live in semi-symbiosis with parasitic worms (and actually are a pretty neat religious order of magical ritual logic) and who stabbed thousands of Earth's mightiest heroes a while back. We beat the worst back but the Hive are still there, and now our old Hive-hating pal Eris Morn seems to be caught in some shenanigans summoning phantasms of bosses we've bashed.

So you want your Shadowkeep fashion to convey: I am on the moon; I have come to save the moon; the moon is cursed by ritual magic; okay maybe sometimes I too dabble in iffy magic to get cool treasure; also now there are ghosts on the moon too, what the hell. These are those looks, combining elements of space suits and ritual garb. These are looks which protect against both the vacuum of space and the coming darkness. 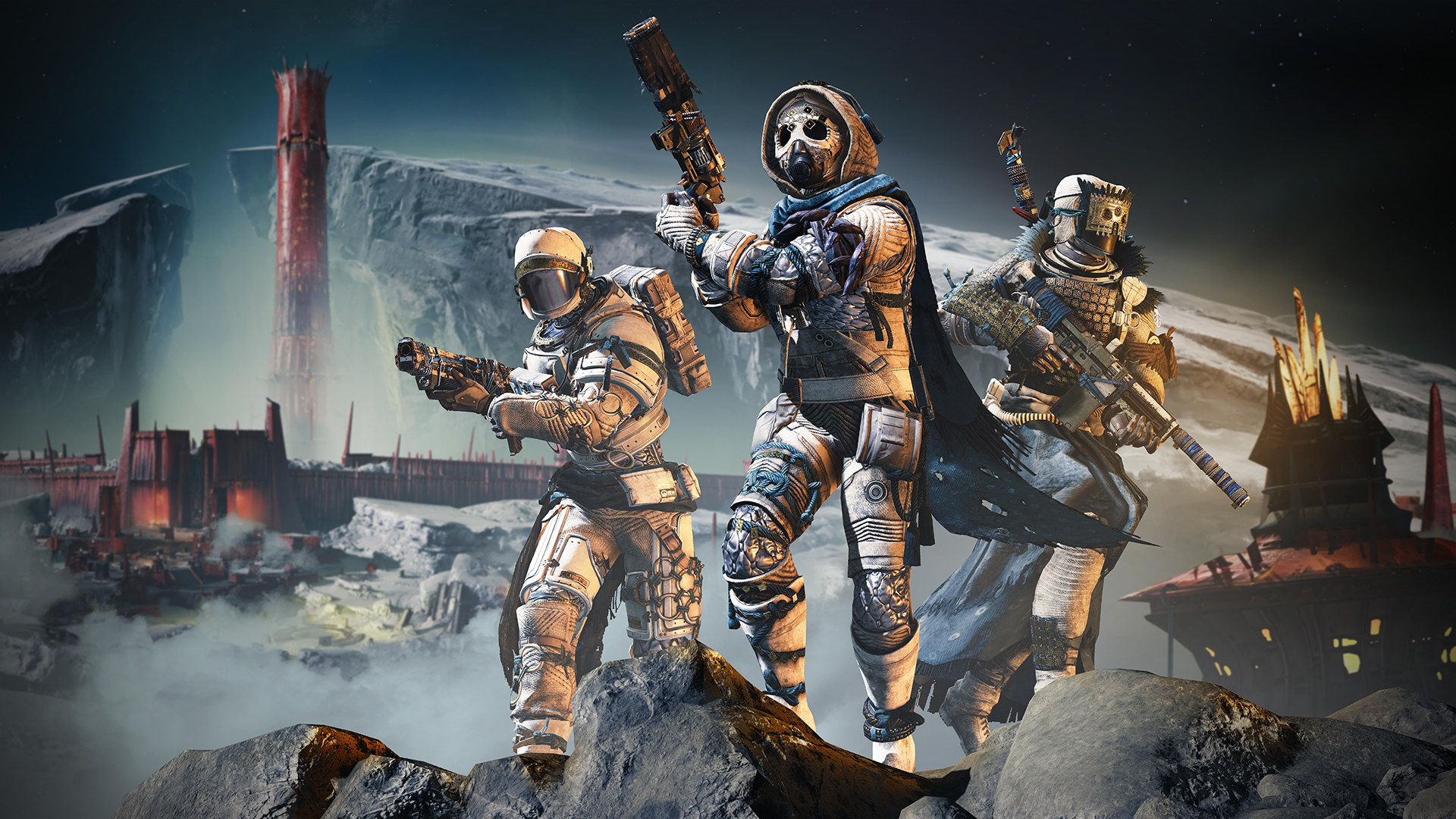 You're looking at (I think) the same set of armour in its three versions for Destiny's three character classes. From left to right, that's the Titan (knight spacewizard), Hunter (rogue spacewizard), and Warlock (magician spacewizard).

Coarse white fabric is classic space suit material but here also brings to mind ritual robes and wraps. The parts gathered in ribbing echo some space suit designs too, only here the ribbing is in decorative patterns. An underlayer of shiny quilted insulation. The torn and reclaimed cloth, deep blue perhaps with a celestial or runic motif, worn in each class's style. Insulation tape tied in careful bows and wrapped crudely around gun barrels. Bungee cords trying to hold parts together. The charms and rings in ornate knotted cord, ritual fetishism bordering on sexual.

The Titan's spacedome with cocked shield resembles a knight's helm with a visor. The Warlock's mask echoes the three Hive eyes Eris Morn took to replace her ruined own. The Hunter's respirator has VAST AWFUL EMPTY HOLES. Love those eyevoids. Such a good mask.

Shadowkeep and New Light will bring a new armour system to Destiny, one which looks like it'll let us swap out perks and upgrades on armour (Bungie are still a bit vague). If this means I can customise my spacehorror suit the way I want it, I will never take it off.

These are the looks to kick in ghosts and steal their treasure.