Iron Harvest is an alternate history RTS in which the great empires of the early 20th century invented giant stompy robots with machine guns for heads and spinning blades for arms. Inspired by the work of Polish artist Jakub Rozalski, who paints smokey pastoral scenes loomed over by grey machines lumbering across hazy horizons, the game depicts a world in which the mechanization of warfare didn’t stop with tanks and railguns, but instead progressed to iron mech suits and industrial-era megazords.

These are very good robots. Not the pristine, precision-engineered war machines of modern science-fiction, with all of their ball bearings and cupholders and heated seats, but noisy, oily, juddering wrecks that stink of WD40 and tremble like nervous metal greyhounds. These are janky, diesel-powered mechs that look like they’re about to rattle themselves to pieces sooner than stroll into battle. Iron Harvest conveys the look and feel of Rozalski’s fantasy universe, tapping into the sense of awe and privilege real Europeans must have felt when they witnessed the first ever tank trundling into their town to obliterate the post office.

In contrast to the vastness of the machines, the scale of the battles in Iron Harvest feels decidedly personal. A single player campaign focuses first on the story of Anna, the leader of a bunch of Polanian rebels, as she and her best friend, a grizzly bear who can breathe ursine healing gas on injured units, defends her homeland from a Rusviet plot to destabilise the delicate peace treaty between the two nations. Missions vary in scope from chaperoning your hero and a few handfuls of units from one side of the map to the other, using the cover of sandbags, smashed up buildings and fallen logs to navigate around and flank enemy soldiers, to large scale battles in which opposing bases are constructed and resource-generating sites repeatedly change hands. 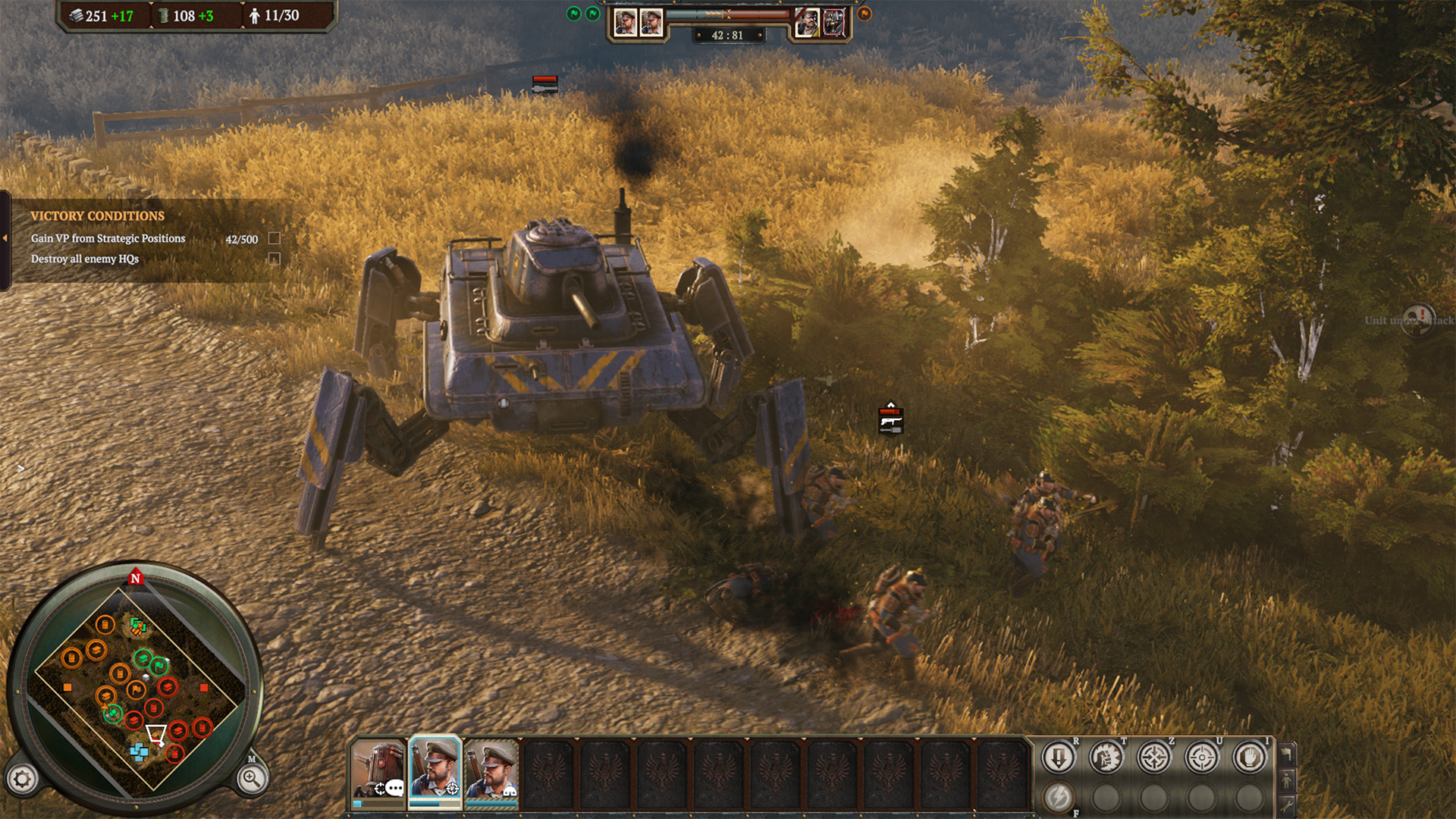 The game handles like Company Of Heroes — which Iron Harvest is consciously inspired by — or a slowed-down Command & Conquer, or any mid-2000s RTS where the camera perspective doesn’t pull back very far, and your focus is on manoeuvring units into tactically advantageous positions rather than surveying the entire battlefield at once. Individual squads are hardy and able to take a thorough beating given sufficient cover, allowing you the opportunity to send countermeasures to the rescue, usually in the form of a slightly larger or faster robot than the one your opponent’s got. In this manner, skirmishes can slow right down and can become battles of attrition once a couple of units dig their heels in. Paper comes to the rescue of scissors, only to need rescuing from a rock.

Each unit has a clearly signposted strength and weakness. There’s a mech that looks like a friendly grain silo with metal spider legs and gatling guns for hands, which carves up any soldiers who’ve wandered out of cover. There are rocket units who can take on mechs by attacking their weak point, which in the grand old tradition of giant-robot-construction is positioned on the rear. Grenadiers can flush enemy units out from behind cover, engineers can repair units and construct barracks to produce more. Beneath the charismatic cast of incongruous bipedal tanks, Iron Harvest is fun but uncomplicated. If you’ve ever stood within two metres of somebody who has played a strategy game before, you’ll have absorbed this level of knowledge through psychic osmosis. 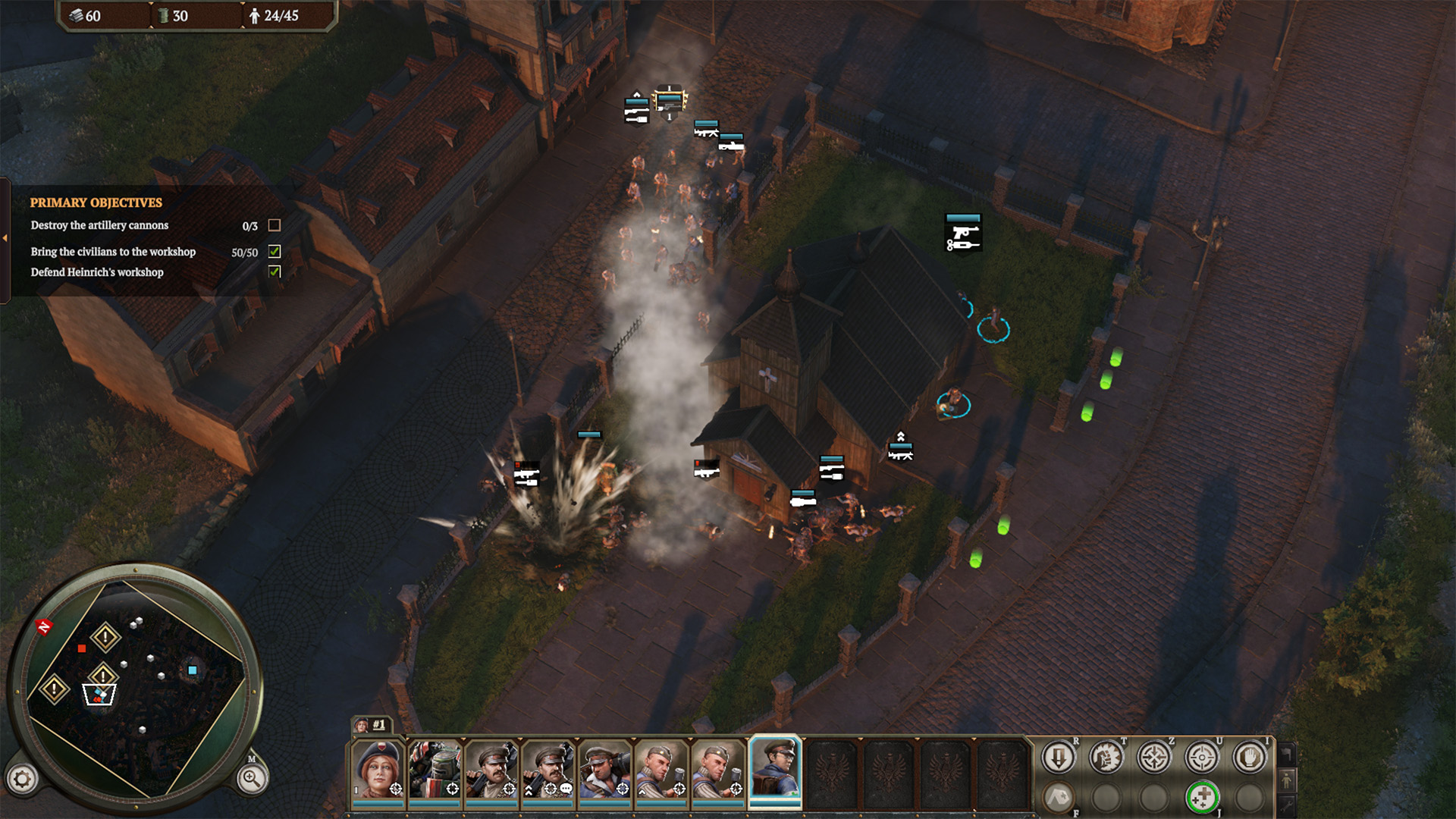 But then there are the superstar units, the building-sized, end-game mechs. The very biggest machines are a spectacle, like IKEA warehouses that have grown a pair of legs, cumbersome and absolutely thrilling to command. Order them to hunker down and they’ll draw in their vast appendages to become impenetrable rocket silos. Order them towards an objective and they’ll take a direct route through any buildings in their path, dispensing with wayfinding to carve a neat furrow of destruction through rows of terraced houses, sending bricks and debris flying for miles.

It’s a shame that Iron Harvest’s tight, top-down perspective doesn’t allow for mechs on the grand scale of Rozalski’s most god-like and horizon-dominating war machines, but a mixture of subtle animation and sound design makes the game’s megamechs seem much larger than they appear on screen. When one is eventually taken out, it sounds like an orchestra being fed into a compactor over the course of thirty, ear-shredding seconds. 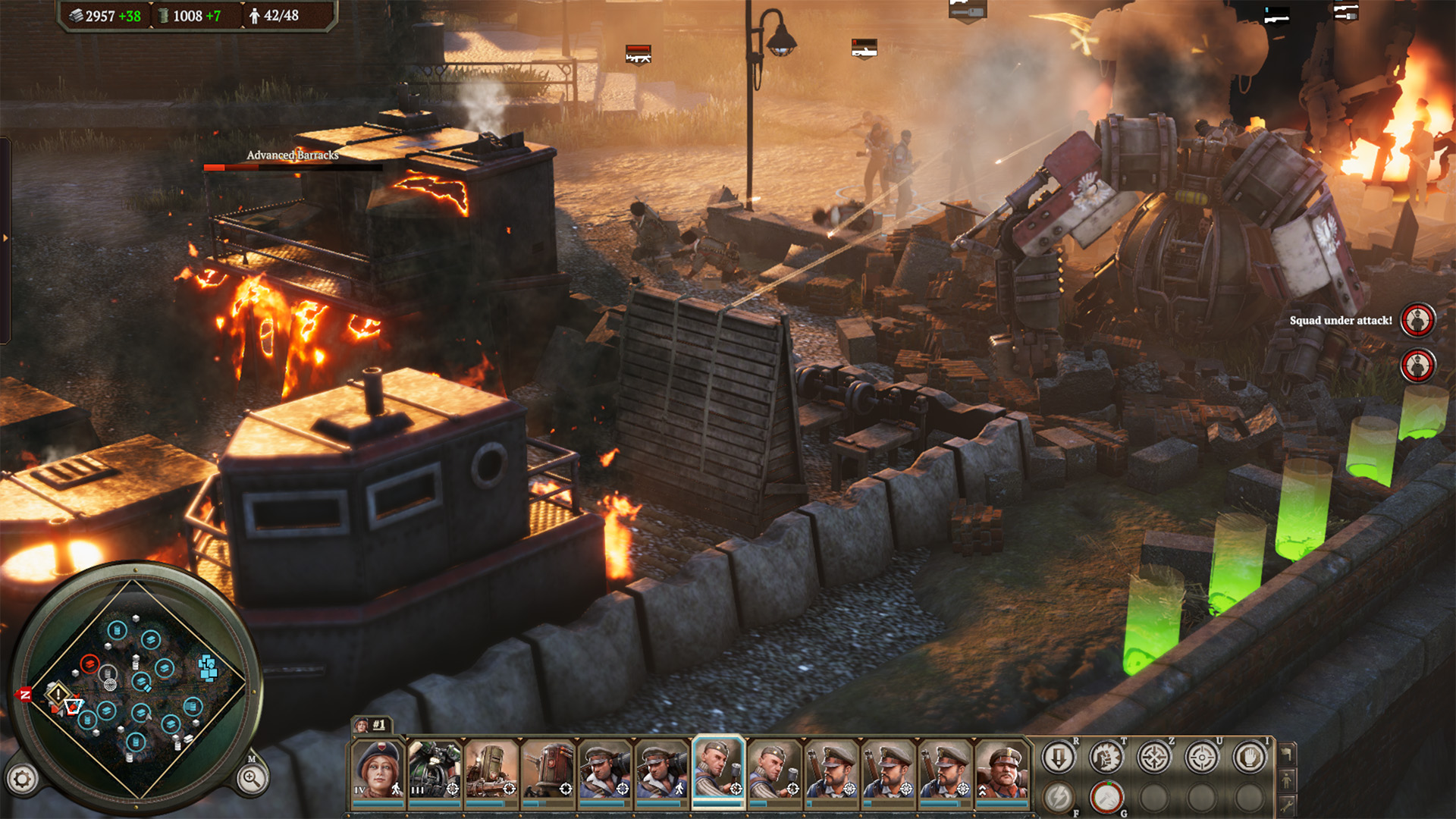 The single player campaign is a hefty thing, including all three of the game’s factions and set across a series of varied and story-driven missions. In an early Polanian mission, you’re protecting a steam train as it winds through a series of narrow mountain passes, using your sniper unit and her bear friend to scout ahead for enemies before deciding on the best tactical approach for each encounter. When you eventually arrive at a heavily fortified bridge the mission opens up by unlocking base building and resource collection, merging an earlier focus on exploration and small scale shootouts with huge, noisy, mech-thrashing battles, all on the same map.

Taken with the slowly expanding roster of challenge maps, there’s more than enough single player content here to satisfy the multiplayer-averse and the chronically underskilled. Each mission usually ends with a highly entertaining cutscene too, in which a pantomime villain in a custom-made mech suit leaps out from behind a barn to threaten you and your magic bear before running away again. This is where Iron Harvest deviates most from Company Of Heroes. 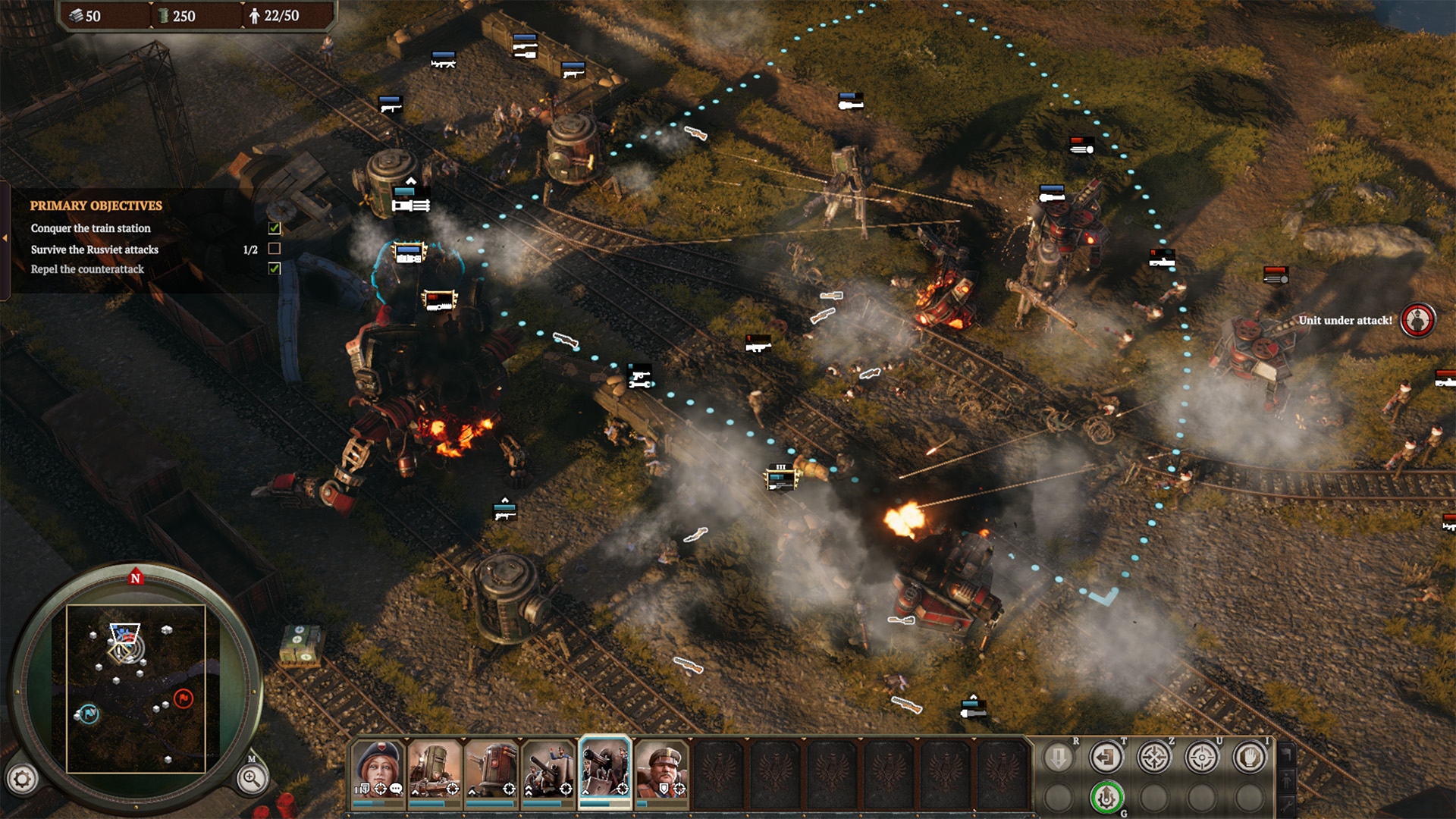 Multiplayer comes in the form of a co-operative single player campaign, which allows either player to control any friendly unit on the field as though you were both grappling the same keyboard and mouse. Competitively, if the sadistic matchmaking algorithm doesn’t summon a vastly more experienced player to comprehensively humiliate you, skirmishes play out between two teams of one to three players on maps littered with resource generating control points. The overly simple balancing of Iron Harvest’s units is more noticeable here, where the use of high-falutin’ tactics like cover or positioning is quickly undone by simple type advantages. The basic composition of your army tends to determine their survival rate, far more than where you tell them to stand. 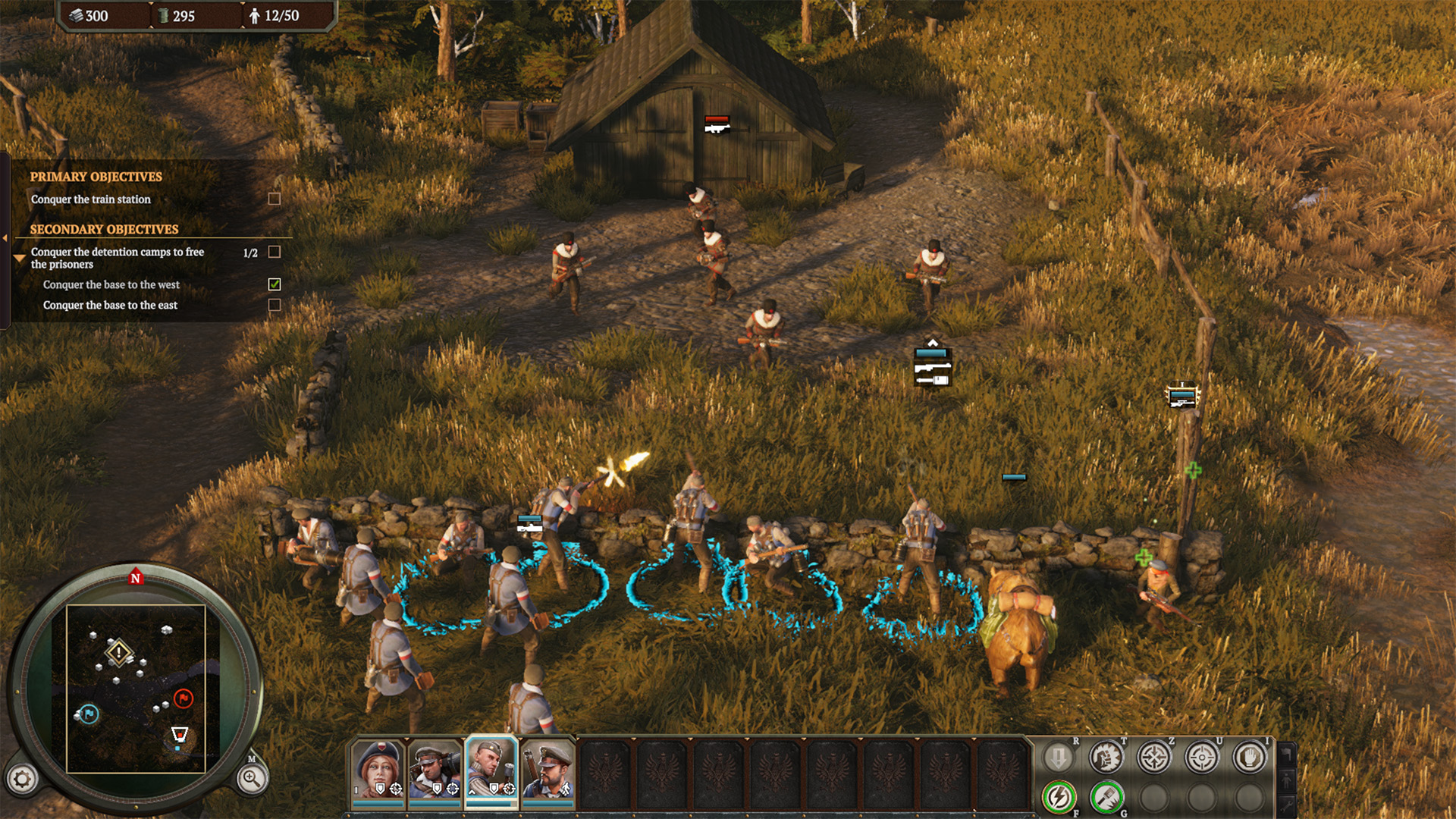 Of course, if that type advantage happens to fall in your favour and your flame-spitting robots are merrily incinerating a platoon of soldiers whose human flesh is predictably weak to fire, that lack of tactical depth won’t concern you quite so much, and you can relish in this game’s realisation of Rozalski’s intriguing and weird alternate history. Iron Harvest is a throwback to one of the last golden ages of the genre, often feeling as old fashioned and crusty as that association entails, but frequently reminding us of the essential appeal of extremely large robots chilling out in timelines where they shouldn’t be.