Well. This is not what I expected to be doing today. Apparently, I've just pleasured my computer sexually via a series of old school Windows sliders. Set in a future where physical intimacy is (finally) a thing of the past, this free game invites you to find release in a medium that... I don't know, man. What did I just play? Are we even playing this game or is it playing us? Do I feel used? Maybe you should just play it too. I recommend turning the sound on. It's called It is as if you were making love and yes, it delivers on that premise.

We've covered the works of Pippin Barr on this site before. Barr is an experimental game designer who also works everywhere from Eurovision to performance art to academia. Barr's previous title It is as if you were doing work is a complicated, sad, fascinating glimpse at the lies of modernity and also how we'll one day pine for the emptiness of pretending to have a purpose. Read Alice's write-up here.

This follow-up bases itself in a similar near future dystopia, albeit with a much different user interface.

It is as if you were making love is a game posing as an application from a near future in which humans have lost the interest and will for physical sex with other humans. Whether this is through distaste or for other reasons is not made clear. The application promises to provide humans with the experience of erotically pleasuring someone without the involvement of another human being. The experience is created as you interact with a set of standard user-interface elements styled in the tradition of a classic operating system along the lines of Windows 3.1 or 95. The major input element here is a slider, which is used to sexually please the interface, while other elements such as a text-field, a progress bar, and dialog boxes provide feedback on your success. You will know when you have 'won'.

Play the game in your browser right now. It is mobile-friendly if you're reading this on the toilet but would still like to engage in slightly unsettling sexual interaction.

I am not great at pleasuring my computer. I have much to learn. Do not read into this. 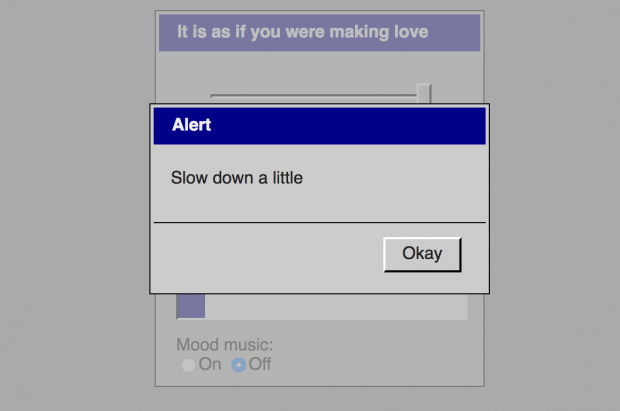