If you click on a link and make a purchase we may receive a small commission. Read our editorial policy.
Premature Evaluation is the weekly column in which Steve Hogarty explores the wilds of early access. This week Steve resolves the conflicts of WWII over a pleasant game of cards in Kards.

Release: Out now (early access)
On: Windows
From: Steam
For: Free to play

My nice grandad fought in World War Two, along with all of the other nice grandads, against the fascist grandads who were causing quite the stir around Europe at the time. As far as I can tell my grandad had a relatively pleasant time, romping around in the desert with his fellow grandads, firing some really big guns into the sky until he was captured and allowed to safely wait out the rest of the war in a POW camp. It probably wasn’t quite as relaxing as a weekend at Center Parcs, but from what I’ve been told grandad never had to eat his own shoes in a trench, or witness a dog catch a grenade in its mouth before it ran directly into an enemy machine gun nest and valiantly exploded in a shower of shrapnel and collie parts.

These very real horrors of war are sensibly avoided in Kards, a kollectible kard game that turns the darkest and bloodiest chapter of human history into a delightful free-to-play strategy lark, with booster packs and neat animations and everything. It’s very much in the vein of Hearthstone and Artifact, except instead of blighted goblins and dark wizardry you’ve got a deck of dry-sounding World War Two themed units, such as the 95th Rifle Regiment, the 506th Airborne and the 980 Volksgrenadier (surely everyone’s favourite Volksgrenadier). 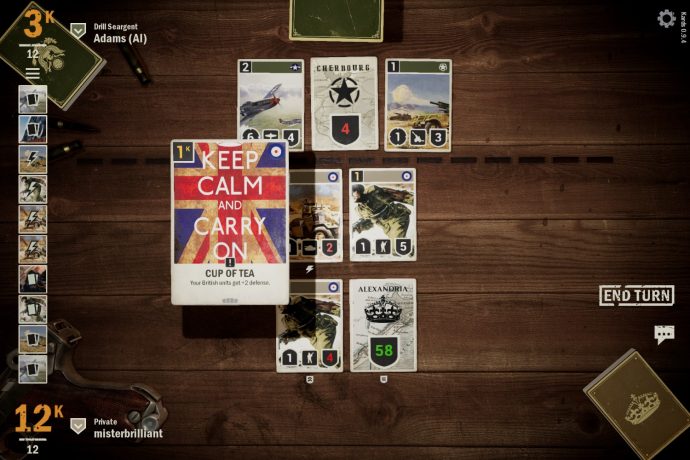 You take turns playing cards from your hand, deploying infantry, tanks, artillery and planes to the battlefield, each with various strengths, weaknesses and abilities. You trigger one-shot action cards and order attacks on the enemy, with the overall objective being to whittle down the hit points of your opponent’s headquarters until it eventually explodes. In stark contrast to the actual war, which famously involved limbs being blown off and soldiers being crushed to death under slowly reversing tanks, politely exchanging cards with one another is a far more civilised and bloodless way to settle disputes between world powers. I think grandad would have approved.

If you’ve played any one of the thousands of free-to-play collectible card games besides this one, you’ll slip right into Kards without much fuss. It’s basically Hearthstone wearing a cool new army beret, and the military theme makes a whole lot more intuitive sense than anything the fantasy genre could ever concoct. Long-range artillery can lob shells over the frontline and attack without receiving damage. Airborne fighter units can fire on any other cards on the battlefield and defend adjacent cards against bombers. Tanks are speedy, and so can move to the frontline and attack in the same turn. A cursory knowledge of battle tactics derived from watching Saving Private Ryan should be enough to get to grips with the basics. 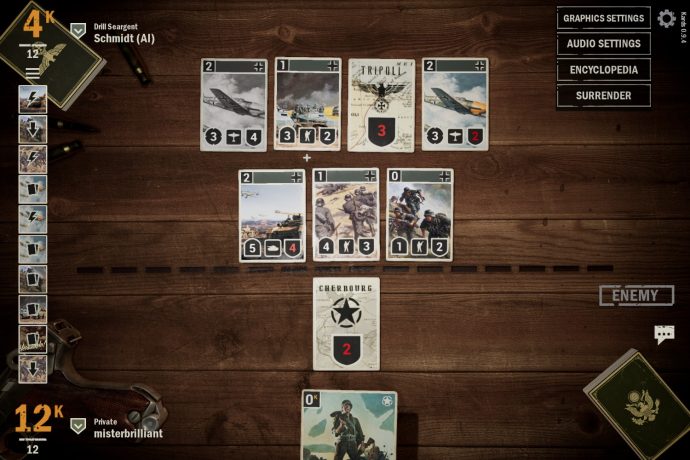 It also helps that action cards and units are all thematically tuned to the characteristics of whichever of the five nations they belong to. So the British are generally good at aeroplanes, and have a ‘cup of tea’ card in their starter deck that boosts every unit’s defence by two points. The Germans, meanwhile, are good at tanks, and can occasionally use their vast reserves of stolen Nazi gold to buy a couple of extra units in a given turn. That’s slightly less charming than the cup of tea example, but still makes undeniable thematic sense for a WW2 collectible card game. 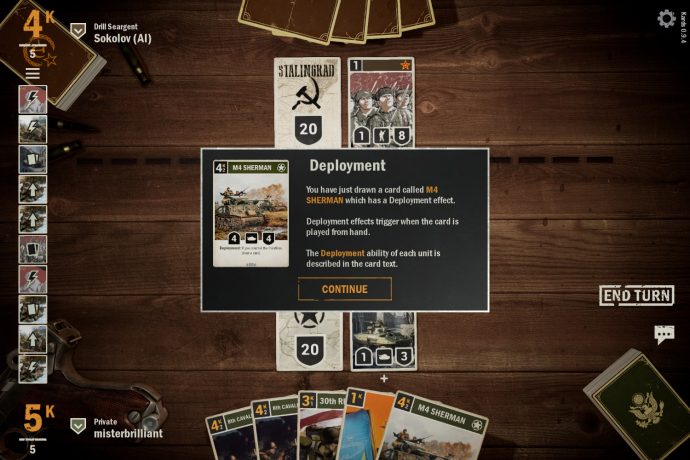 Helping to differentiate things further from the likes of Hearthstone is the frontline itself, a central strip of the board that can be controlled by either player moving units into it. Troops on the frontline can defend your back row and headquarters from most attacks, while also allowing you to freely take pops at your opponent’s back bench. The ebb and flow of a battle hinges on control of the middle of the board, which changes hands repeatedly as cards are defeated and redeployed.

By the later stages of the battle the frontline acts as an unrelenting meat grinder, as you spend your swelling balance of ‘kredits’ (the game’s World War Two-ified version of mana) sending more and more innocent young card-men to their deaths, just to knock a couple more hit points out of Stalingrad or what have you. Those ‘kredits’ also help to pace the game too, limiting the use of higher value cards early on in the fight, and ensuring you don’t start wheeling out entire fleets of Howitzers in round two. And remarkably, it doesn’t take very long before the word ‘kredits’ stops making you gag in disgust. 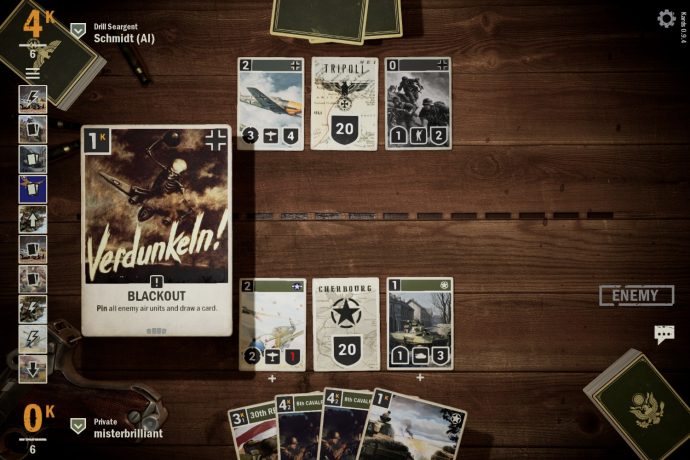 The World War Two theme seeps into every corner of the game’s presentation. Each card has a vintage, propaganda poster illustration in the style of the faction to which they belong, and a light patina of grime having made the trip from a fictional card factory to whichever imaginary frontline bunker these card games are taking place in. Moody wartime Vera Lynn tunes play from a crackling gramophone in some unseen corner of the room. And there’s a loaded handgun sitting on the table at all times, presumably in case this bilateral agreement to resolve the war based on a collectible card game fails, and regular hostilities are hastily resumed. 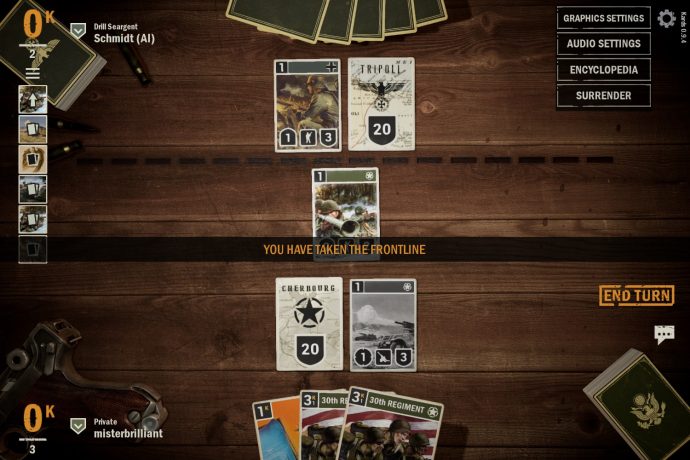 Of course, any concessions to authenticity fly out the window as soon as you slip free of the tutorial stages and begin unlocking new cards and building your own decks, which can freely combine cards from different powers to produce mutant armies from alternate timelines. Britain and Germany can set aside their differences to mix and match their tanks, and then take the fight to some horrifying amalgam of American and Japanese artillery, if you wanted.

In this manner, Kards is a utopian vision of how the war might have progressed, had the world’s warring nations decided to come together and form one global bastard army that fought not with others, but only with itself, and only for fun, and only using playing cards.