The chatrooms of lo fi hip hop YouTube radio channels are often very sweet spaces. People mingle, letting each other know what they’re up to as they listen to the ambient sounds: work, studying, relaxing. Everyone doing their own thing, but united by some chillhop beats and the virtual space of the chat window.

It makes sense, then, that Kind Words draws attention to the fact that it uses that kind of music in its soundtrack via its subtitle, (lo fi chill beats to write to). It's a game about sharing uplifting letters with real strangers. You hang out in a hazy, cosy looking bedroom, scribbling away in response to others’ worries, or ask for responses to your own nagging thoughts. Also there’s a friendly postdeer.

It turns out that people are sad about a lot of things. Relationships, work, the fact that the world is burning up and the political landscape somehow keeps hitting new lows every single day. It might feel like something a tiny game space that’s essentially just an interface for sending and receiving messages from strangers isn’t equipped to handle. And it’s not, really. But sending off tiny missives – I hear you! I understand how you feel! – still gives that warm glow of having done a nice thing.

Maybe it’s just because I’m a writer by trade and personality but applying words to a problem feels like a balm even if not a solution. And without many solutions actually to hand for a lot of the problems being discussed, being given the opportunity to offer that small comfort, to do something rather than nothing, is compelling. It’s strange to apply such a video game-y word to it, but I really did feel compelled, always wanting to write just one more reply.

It is a little gamified, which probably helps that impulse along. You can’t reply to people who send you messages, but you can thank them by giving them a little sticker. You can attach those to letters in turn, and obviously the idea is to unlock them all, scattering the related trinkets around your room. And hey, they are cute. 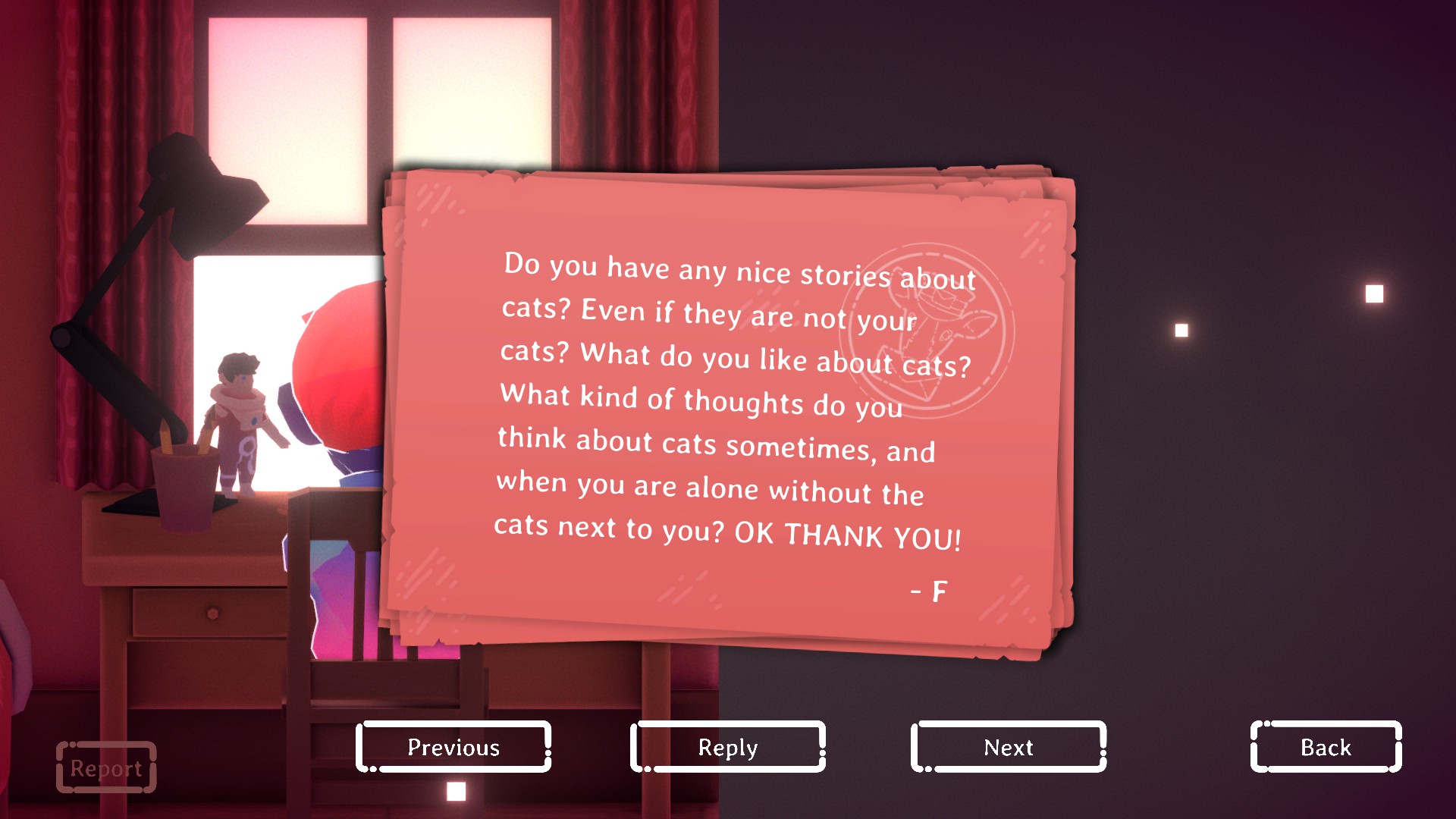 Even after sending a bunch of messages, and getting plenty of thanks and stickers in return, I felt cynical about whether a note from a stranger would do anything for me. I wanted to try out sending my own request for the sake of having tried everything in the game, but not because it seemed especially like something I would especially like. I wasn’t even sure what to put down until I had the box in front of me and suddenly a perfectly-formed worry tumbled from my fingers onto the screen. (Writing, am I right?)

Anyway, the deeply predictable punchline here is that I ended up crying a lot.

When you’re not getting emotionally devastated by kindly strangers, it’s a lovely thing to have tabbed out on a second screen thanks to the music and dreamy pink space. Every so often a paper airplane will go by with a little message from another player, so you don’t have to always be digging into other people’s worries or your own to have something nice to read.