I don't build jigsaws, but I understand grownups that do. I can easily imagine the relaxation to be found in sitting at a kitchen table with a family member, the radio on, and clicking together shapes to make a pretty picture appear. I understand it even better after a weekend playing Kingdoms and Castles, a city building game in which you click buildings together to make a pretty picture appear.

All city builders, on some level, offer this source of relaxation for me. I love losing hours to tweaking my road networks in Cities: Skylines, and building out new neighbourhoods in Sim City 4 or even SimCity. They are absorbing but low-pressure, and the reward is normally a bustling ant farm of activity. 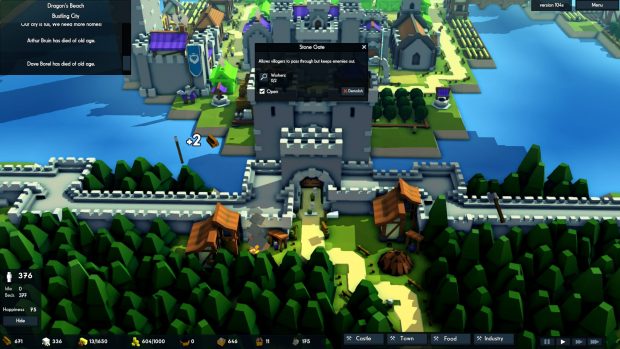 Kingdoms and Castles drives home this sensation even further by boiling away so much of the grander complexity of its genre-mates. You start on a bucolic island by plopping down a castle, and from there the normal balancing act of competing needs spills forth. You lay down paths and homes, and homes attract residents. Residents need food to live so you build farms to cater to them and granaries to store the food in. Granaries require wood to build, so you build a forester to chop and plant trees. The forester needs someplace to store his wood so you build a stockpile. And the stockpile requires staff so you build a larger home to house more residents, only these larger homes require stone, so you build a quarry and...

Find the corner pieces, then build out the edges, then start to piece together smaller sections as you work towards the middle. One task in Kingdoms & Castles naturally leads to the next and soon your town has grown, its streets are filled with little characters dashing here and there with goods on their backs, and you're planning a new expansion out east. 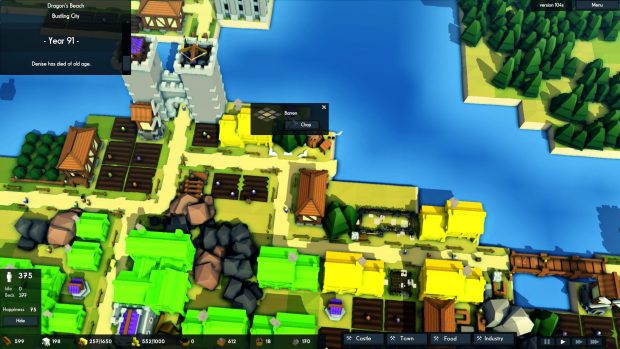 Most of the time these games reach this point and then keep layering on complexity, and as the map fills up, the player's time starts to transition from building and expanding to managing and tweaking. Soon there are graphs, financial reports, and data overlays, or perhaps failure cascades involving depressed workers. I love all that stuff, but I'm glad K&C doesn't go there. You can tax your residents 1, 2 or 3 gold per year, and that gold is used to pay certain workers and unlock certain buildings, but it's that simple. There are advisors, but they give simple advice that can be mostly ignored. Its closest relative is the idyllic productivity of The Settlers.

That said, there are also disasters, of a sort. Winter comes each year and if your crops aren't stored in time, they'll perish in the cold. Heavy rains can flood your farms and stop crops from growing at all, and lightning strikes can cause fires. Eventually plagues will break out, requiring doctors to stop the infected dying a few months later. And lastly there are viking and dragon attacks, which periodically arrive to smash apart your stuff. 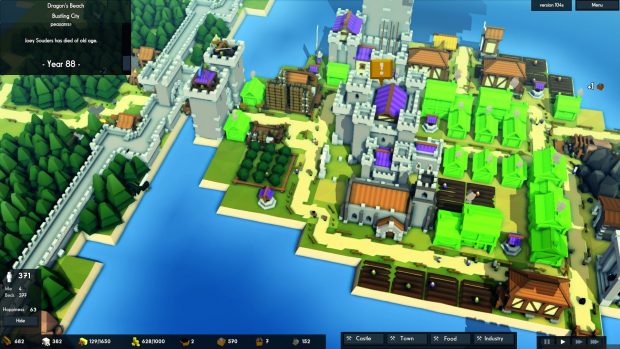 On the ordinary difficulty level, none of these offer any real threat. By the time the dragon attacked, I'd built enough ballistae and archery towers that it was easily killed. Fires are easily extinguished as long as you remember to build wells (which are cheap and small) around your city. Vikings get harder as the game goes on, but by the point they started arriving with wall-pounding ogres I had even better defences and so many resources stored that I could just rebuild whatever they destroyed as soon as tehy got bored and climbed back aboard their boats. One hospital was enough to save almost everyone any time a plague broke out, and new residents arrived often enough that it didn't matter to me much if I lost a few along the way.

The people who live in your city and follow your commands do have a 'happiness' meter and they can 'despair' and decide to leave town, but even at the worst of times their mood rebounded almost immediately once The Bad Thing had come to an end. As long as I had a church, and some libraries, and a supply of food and charcoal for their homes, then they were happy to stay and build my enormous castle walls and statues of questionable value. 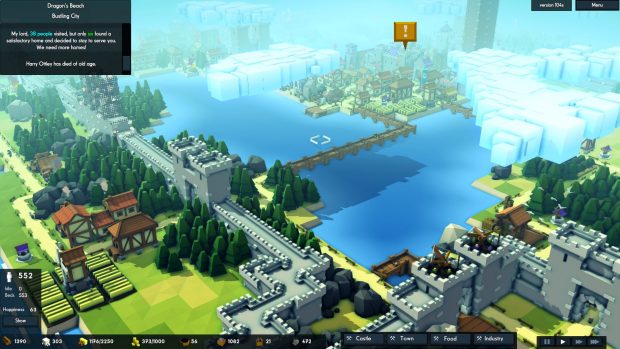 There is a harder mode, for those who want these challenges to be more challenging. I wouldn't recommend it. While the viking invasions were fine with me while they were minor inconveniences, attempts to steer soldiers towards our defense were still fiddly and frustrating. You can train generals and recruit small squads, but right-clicking to move them to a new location seemed sometimes not to work, and they'd lose interest in fighting an enemy if the enemy moved five feet out of the way by the time they got there.

Instead I'd recommend the easier mode, which turns off these minor nuisances entirely and let's you focus on what the game does well. What it does well is satisfying city building and beautiful city simulation. I haven't mentioned the art style so far, but it's gorgeous at times, with blocky, Minecraft-like models that make everything look bright, clean and clear even when zoomed out and looking at busy scenes. It's attractive enough that tinkering simply to make your town more attractive is almost an endgame in itself. 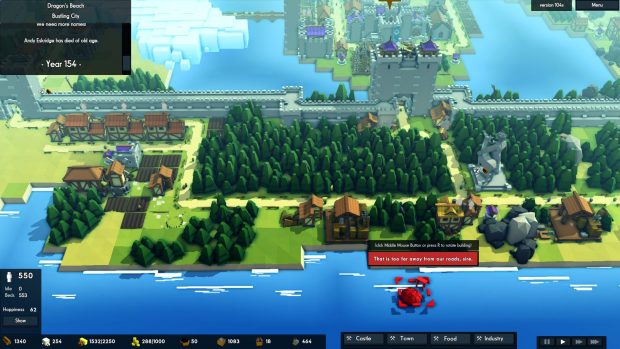 Almost. My one concern might be that, without the complexity that other games shift to in their later stages, I've little compulsion to build this jigsaw more than a couple of times. But in truth I don't really care. I got my money's worth and I've got enough complex games to play. I want more that are simple and that are as satisfying as this, and while I'm done with it for now, I'm betting I'll be drawn back before the year is done. Possibly because there are a few planned updates, including the addition of ports and merchants, that sound interesting. But just as likely because I'll be ready to spend another happy few hours pottering about, finding the pieces that fit.