If you click on a link and make a purchase we may receive a small commission. Read our editorial policy.
Developer: Bloober Team
Publisher: Gun Media

There’s something about mannequins that makes them such prime fodder for horror games. The dead-eyed stare sans pupils, the unnaturally rigid poses and angular elbows, and the perverse mimicry of human behaviour hurls them right into the trough of the uncanny valley. Like many horror staples, these are strategically placed to unnerve players and elicit a quick scare, with a plethora of games placing them in almost predictable locations: at the end of a corridor, in a dimly lit corner, even right behind the player. In the same vein, Layers Of Fear 2 uses such jump-scares abundantly, propping mannequins up in cordoned-off rooms and against dusty furniture. These bizarre figures seemingly trail the main character wherever he goes, a tortured actor seeking inspiration for a prestigious role in his latest film.

Like the similarly tormented painter from the original Layers Of Fear, you'll be wandering through a grand but unsettling place, this time a lavish cruise ship. This ship serves as a setting for the darkest recesses of the actor’s mind, while the labyrinthine hallways twist and mutate into disquieting, macabre scenes, blurring the lines between fevered dreams, performance and reality. Before you start navigating the ship, every act begins with the actor waking up from his bed in his cabin, which is immaculately decorated with tasteful ornaments. 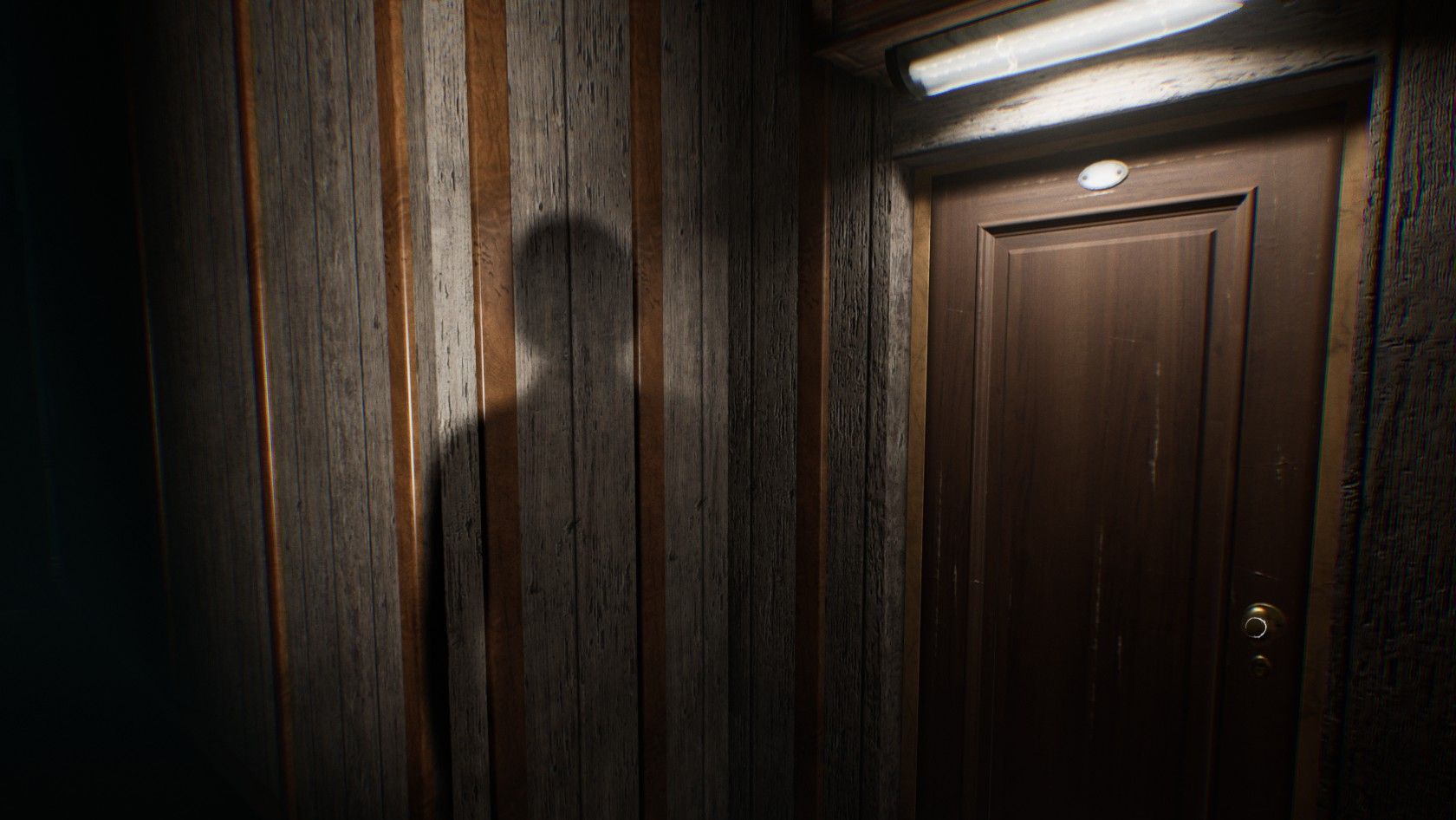 Then a menacing voice reverberates through the room, demanding his subservience. And from the clues and paraphernalia strewn across the ship, you get the feeling that the actor isn’t particularly keen about being here. He soon crumbles beneath the stresses of filming on a ship, a place he definitely has some uncomfortable history with. And under the looming voice of the eccentric and dictatorial director, the entire affair eventually descends into a downward spiral of despair.

To its credit, Layers of Fear 2 seems to understand horror’s over-reliance on mannequins for cheap scares. It tries to put together a nuanced take on this horror trope, often by referencing them as stand-ins for people in the actor’s life, rather than representing abstract fears. After all, mannequins do serve a functional purpose in real life. They have been used by artists to study the human form and anatomy since the days of the Renaissance, and still serve as substitutes for models and actors today. At times, they are muses for fashion designers or photographers.

Within the actor’s troubled psyche these mannequins—as-family, or mannequins-as-friends, are mostly inanimate and expressionless, but somehow eerily impassioned in their postures. They bury their heads in their hands in distress, lay crumpled in a corner as if having been bludgeoned with a heavy object, or curl up in the fetal position, gripped by some undisclosed fear. The use of mannequins would have made for a fascinating motif, perhaps with the actor recognising the connection between artist and mannequin to address his inner turmoil. Unfortunately, the game doesn’t truly acknowledge this, instead relying on vague allusions to his past and ambiguous quotes that hint at his crippling anxiety. Sadly, it relegates the mannequins to arbitrary aspects of spooky set design, doomed to hold ossified, empty postures in the endlessly winding halls of the ship. 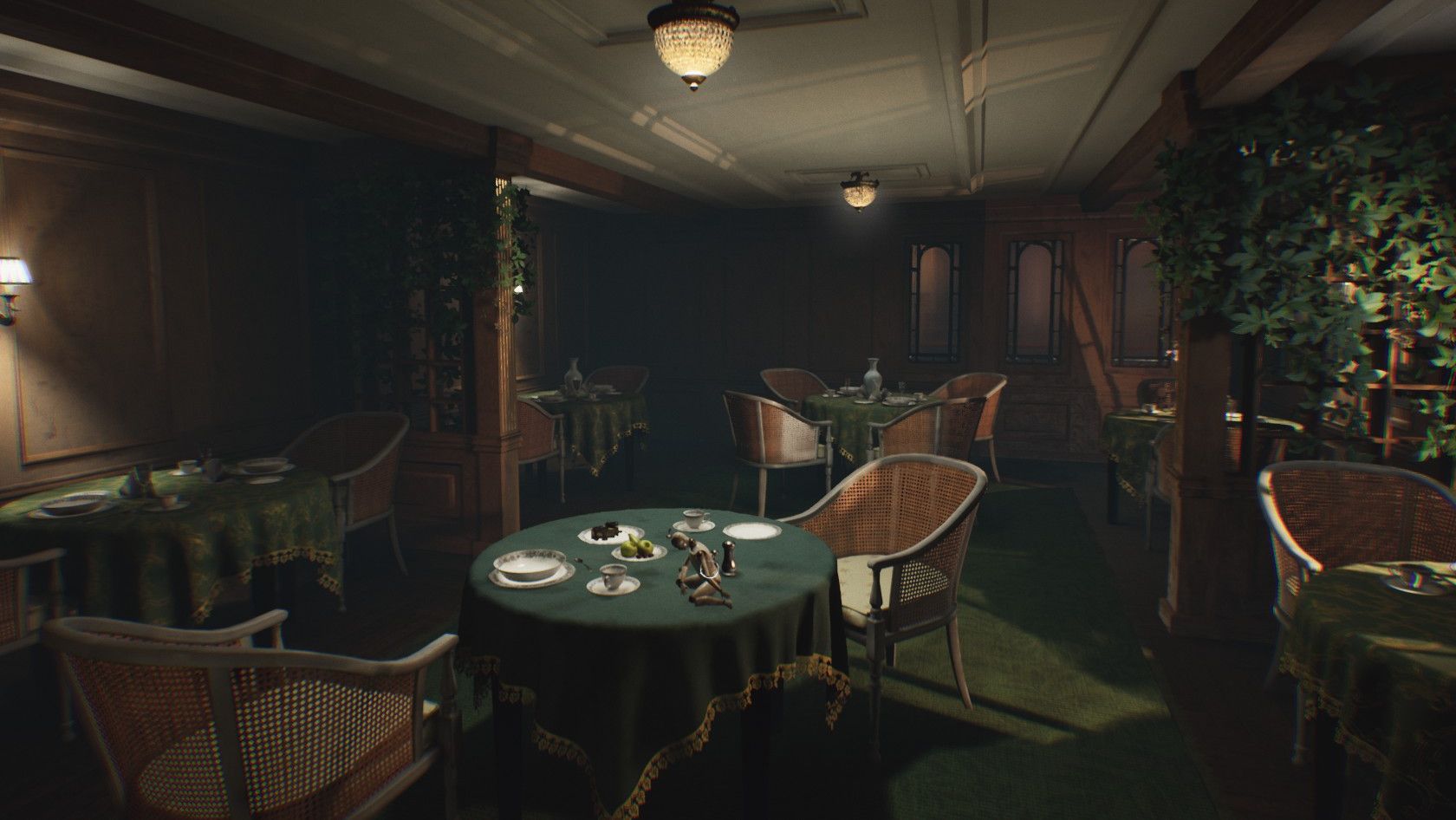 This encapsulates the biggest issue with the game. It’s full of genuinely compelling metaphors that could have been expanded on, potentially moulding tired clichés into memorable, unsettling moments. The game is thick on foreboding atmosphere, with phantom figures materialising and dissipating just as abruptly, and mannequins appearing out of nowhere, but still mostly subsists on recycled tropes. Falling debris crashes unexpectedly (accompanied by frenetic violin screeches) while hastily scribbled notes detailing the actor’s collapsing mental state are pasted on mirrors and discarded atop piles of books. On occasion, pitch-black rats scuttle past the wooden boards of the ship, strangely serving more as an unfamiliar respite than an object of horror. There’s even a mannequin (yes, it’s always a mannequin) that crawls out of a cackling screen, with black tar spilling onto the pristine carpet, an obvious reference to horror movie The Ring, but also an overused pop culture relic today.

All these are sights you’ll be privy to as you lumber through the ship, fiddle with various items and artefacts, hoard collectibles in the form of retro movie posters and film photography, and solve trifling but frustrating puzzles. Essentially, it just boils down to opening doors, examining items, spotting a ghastly mannequin - rinse and repeat. It’s a tad hard to be rattled by these scenes when you can smell the impending frights from a mile away, or when you’re tugging your hair out from the sheer frustration of an incomprehensible puzzle. Even the typical chorus of disembodied voices (a very videogame-y sign of a fractured mind) becomes more banal than frightful. 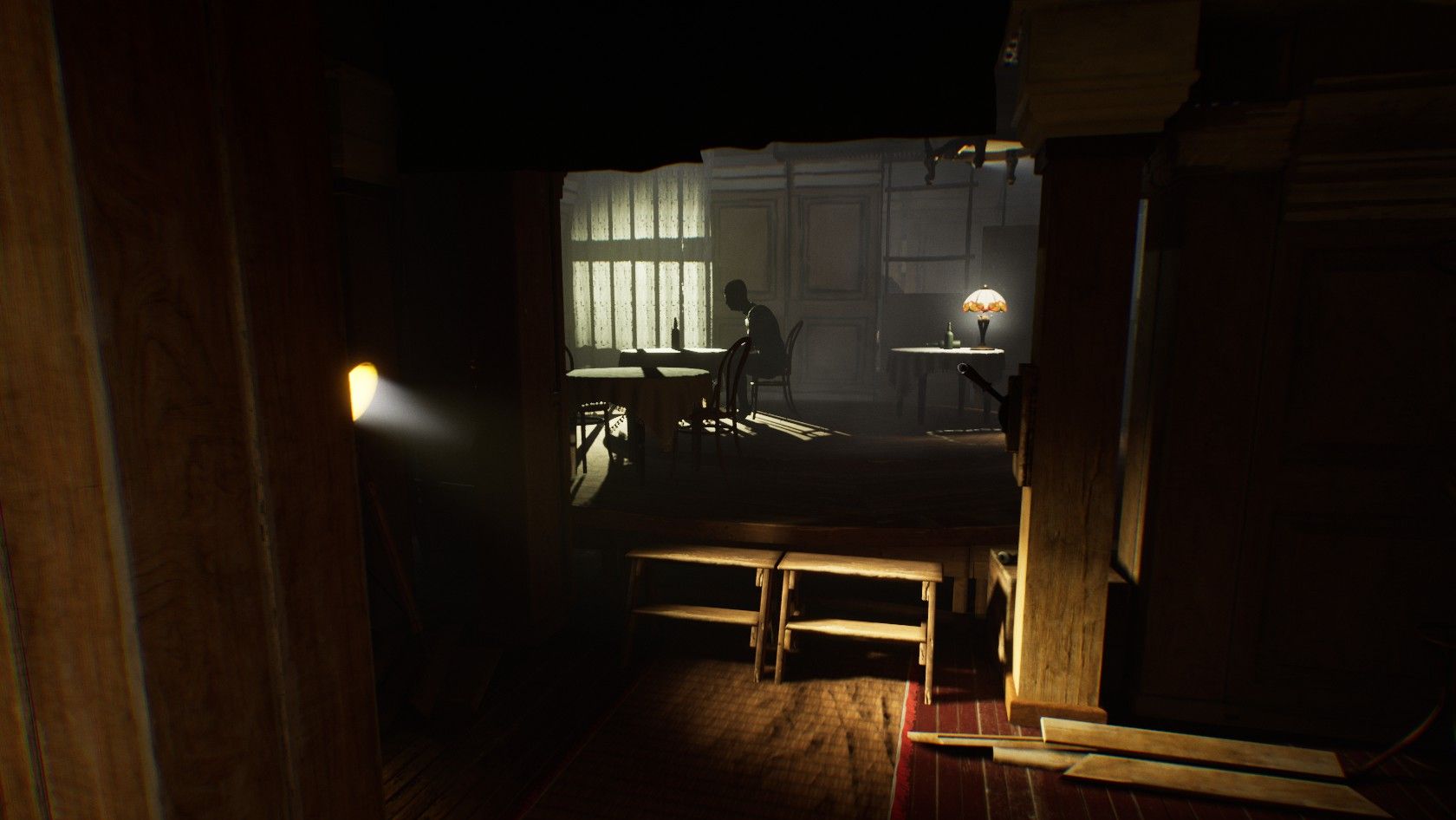 It also strives for emotional impact by offering players a glimpse into the actor’s traumatic history, particularly stemming from his close bond with his sister. You can pick up paraphernalia and assorted knick-knacks that have him recalling past events, with the game clearly pleading that you feel something for him, and sympathise with his descent towards madness, because of the ordeals that have long haunted him. Yet his recollections are too fuzzy and hollow, and they deliver little context to his character. In the end, he’s more akin to a blank slate devoid of any real personality, and we never get a complete portrait of his personality other than the disparate patches of memories attached to him. Incidentally, this carries eerie parallels to the vacant mannequins that haunt this nightmarish hellscape.

Nonetheless, there are hints of inventiveness within the game. Towards the latter half, the game gradually ups the ante with scenes that conjure a dreadful sense of apprehension, occasionally throwing the mundane pace I'd grown accustomed to into upheaval. One sequence has you walk down a corridor (typical fare for the game by now) but the exit at the end is soon engulfed in flames. And if you attempt to turn around, the camera forcefully yanks your perspective forward, even as a crowd of mannequins blocks your path ahead. That was when it dawned on me: the only way forward is to walk backwards, even while completely ignorant of the dangers behind me. At that second, a frisson of chills ran down my spine, one of the rare moments that elicited such a reaction. 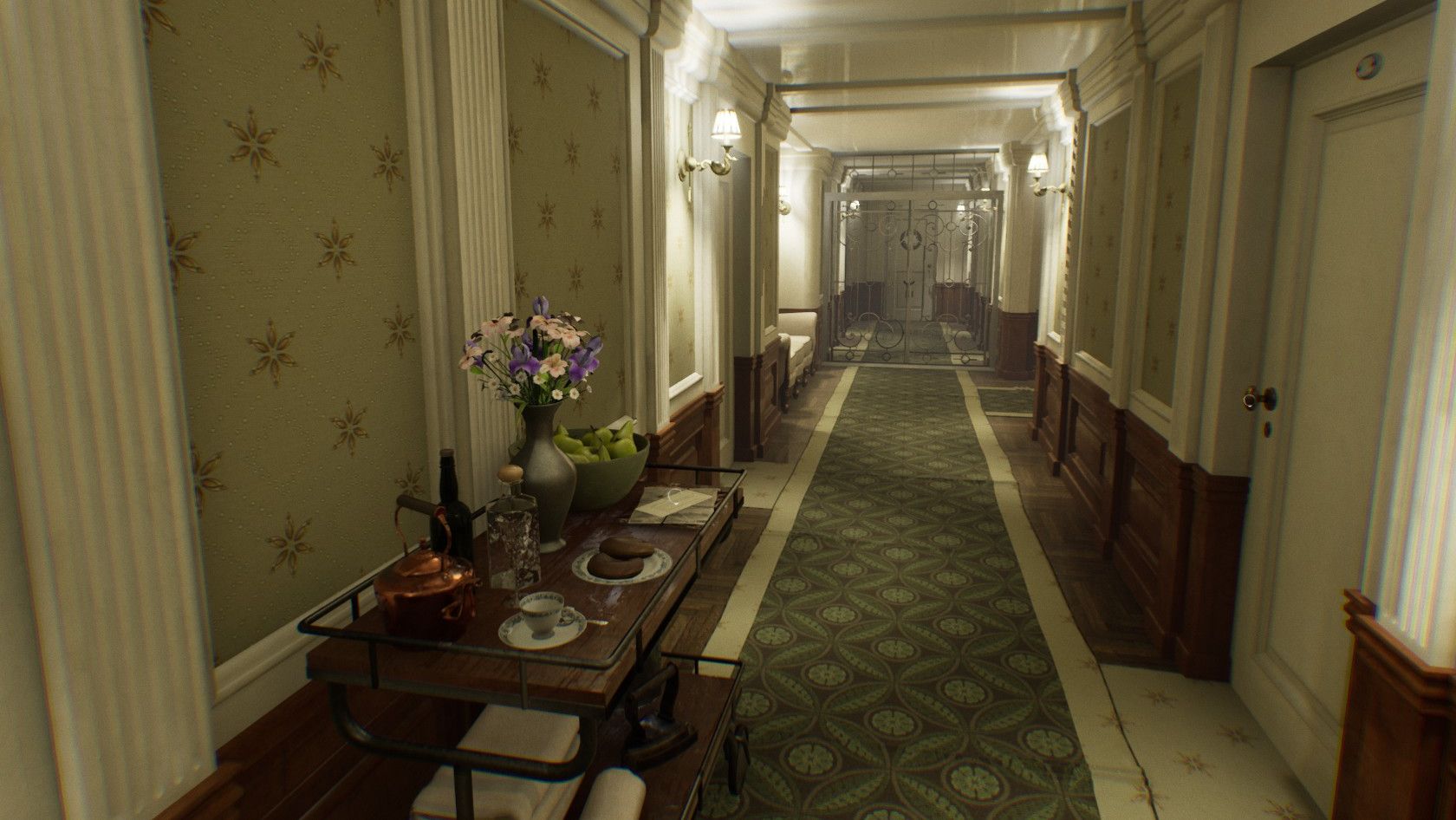 Then there are the chase scenes, which see a sinewy, misshapen monster pursue the actor with a fierce vengeance. These are also genuinely heart-palpitating, although there were moments where I had to crank up the gamma meter to make sure that I wasn’t foolishly running into a wall I couldn’t see.

Layers of Fear 2 and its predecessor are bound together by a theme of madness, which courses through the veins of both games. The former features a painter whose mind was ravaged by agonising creative blocks, whereas the sequel stars an actor who is tormented, yet inspired by his past to deliver a tortured, compelling performance. Whether the game transpires in his imagination, as part of a film, or is based in reality is left ambiguous, which stunts the game’s ability to conflate your fears with those of its protagonist. 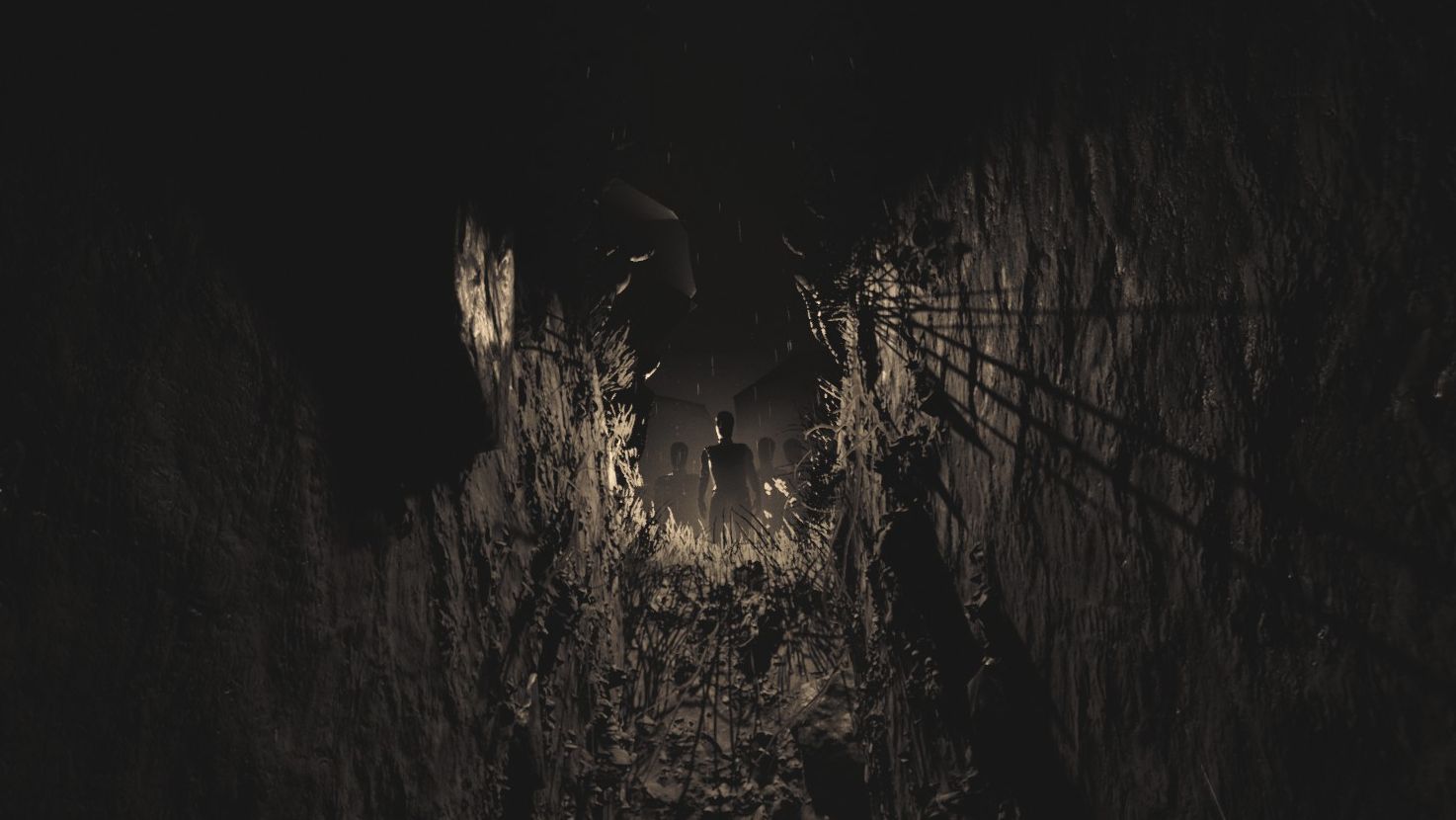 But like the first game, Layers of Fears 2 seems to only adopt madness as shorthand for conveying creepiness and otherness, and doesn’t really engage with its protagonist’s flaws or motivations. Not only is this unoriginal for a horror game (madness as an antagonistic personality trait has been used so liberally in pop culture that the trope is practically worn out by now) but it also dangerously romanticises madness as brilliance for creative souls, even fethisizing the pains of mental illnesses to the point where it almost appears as if such internal troubles deserve to be stoked or encouraged.

The details that were so uncanny and frightening about the early horror tropes — be it the creepy mannequins or gangrenous monsters — could have been reinforced. But they aren’t. What we fear isn’t really the unknown or the ghastly per se, but the feeling of isolation amidst uncertainty and grave danger, and the perceived soullessness of an object such as the artist's dummy. It’s a pity that the game fails to take advantage of these analogies and delve into their immense potential. Instead, it’s too fixated on traditional jump scares to embrace the twisted, palpitating gut of its story about a flawed protagonist and his struggles with inner demons.