Competitive games like League of Legends, Dota 2 and Overwatch are at their best when you play them... competitively. Don't get me wrong, there's plenty of fun to be had tooling around in casual play - relaxed environments are great for hanging out with friends, or just being silly. It's how I spend 95% of my time playing those sort of games. That other 5% of the time though? Those comparatively brief periods where I've been playing with a full team of people who I know, all on voice coms, all trying their hardest to secure a win? Those are the times when those sort of games have truly shone as games.

That's why I think League's upcoming tournament mode, Clash, is going to be a big deal. Starting on May 25th, each online tournament will cost a small amount to enter, run every fortnight, and take place over a full three days of the weekend. I'm a Dota man through and through, but Riot's plans are starting to make Valve's automated tournaments look a bit rubbish.

I'll get to why I think Clash sounds like a step up from Battle Cups in a minute, but first I better dish out some more details.

To enter a Clash, each team member will need to buy a ticket. You can pick those up using Blue Essence, the in-game currency, or buy them using real world dosh. You're team is allocated a tier based on your ranks, with the matchmaking weighted so that high ranked players pull the tier up. As Riot put it: "if you're a team of four Bronzies and one Plat, you're going to face opponents in the big leagues'.

On the first day, the Friday, everyone plays in 4 team brackets. It's single elimination all the way through the tournament, so if your team loses a game you'll get knocked out of the competition proper and slink into a consolation bracket. Look, here's a handy flow diagram that shows exactly how that works. 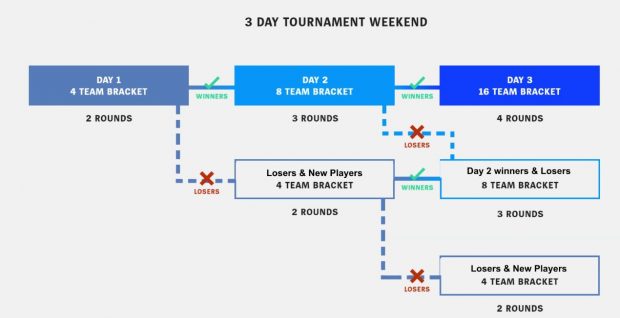 Note that you can take part in a 4 team bracket on any day, but you'll only have a shot at that full 16 team bracket if your team starts competing on day 1.

Got all that? Great. Now for why I reckon it's an improvement on Dota's Battle Cups, and why I'm hoping Valve might emulate Riot's more involved tournament structure later down the line.

Here's the first big problem with Valve's take on how to run automated tournaments: nearly every Battle Cup match I've played has been a stomp. That's probably got a lot to do with the way I tend to play in teams with uneven experience levels - because just like Clash, the matchmaking pits you against people that are all as good as your best players. It's a system that penalises teams like the ones I play in, but I can see why both Valve and Riot feel it's better overall than an aggregate score. A big enough skill difference can allow one player to run away with a game by themselves, and it'd be no fun to get matched against those players if you're playing in a low MMR tournament.

The key difference is what happens after you lose a game. In Dota, that's just it: you're done, you're out. When you lose a match in Clash though, you still get to play in a consolation bracket. If you've made it to the 8 team bracket on day 2 but get knocked out, then on day 3 you get to play in a bracket with people who won their 4 team bracket on day 2. That means you're much more likely to get at least one fun, balanced game - which might still feel a bit special, thanks to the rewards on the line. I'm not normally interested in cosmetics, but they do gain some appeal when they're exclusively earned through skillful play. 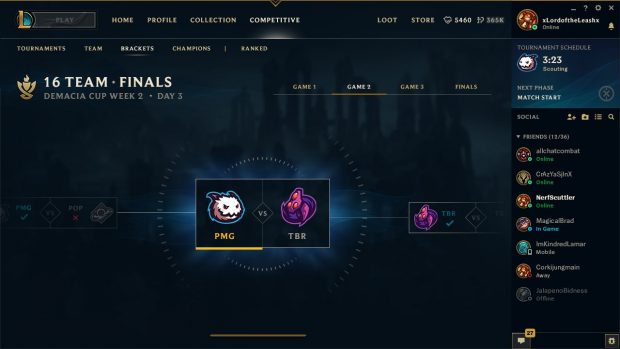 There are a couple of other neat aspects that I haven't mentioned yet. One of those is the way every champion which would have to be bought is unlocked, though I doubt many people will want to pick champions they're not familiar with. More significant, then, is the 'scouting phase' before each match, where you get to see a screen that lists your opponent's stats and top picks. It's possible (and advisable) to do that in Dota 2's Battle Cups, so that you can ban particular heroes or figure out which players are the scariest or more vulnerable members of the enemy team. It's a fiddly process though, and I like how Clash formalises it into something more streamlined.

The multi-day structure also means its possible you might encounter teams you previously met, which gives a chance for spicy rivalries to form. That Akali and Camille roaming duo that tore your team apart a couple of days ago? Now's your chance for revenge.

As that example almost certainly revealed, I don't know all that much about LoL. I know Dota, though - and I know that if Valve announced tomorrow that they were straight up copying Riot's plans for Clash, I'd be thrilled.

League of Legends' Clash mode launches on May 25th.