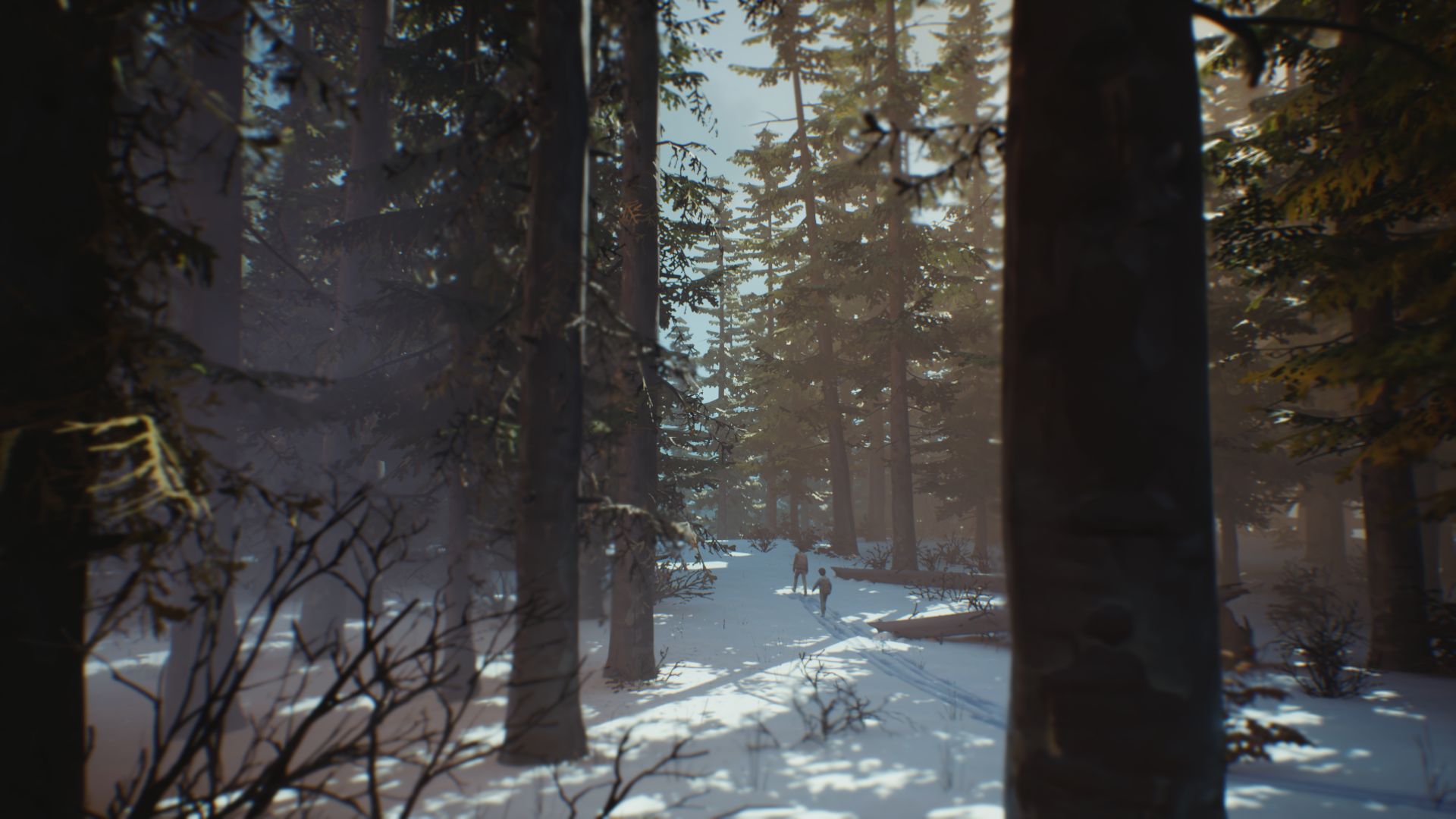 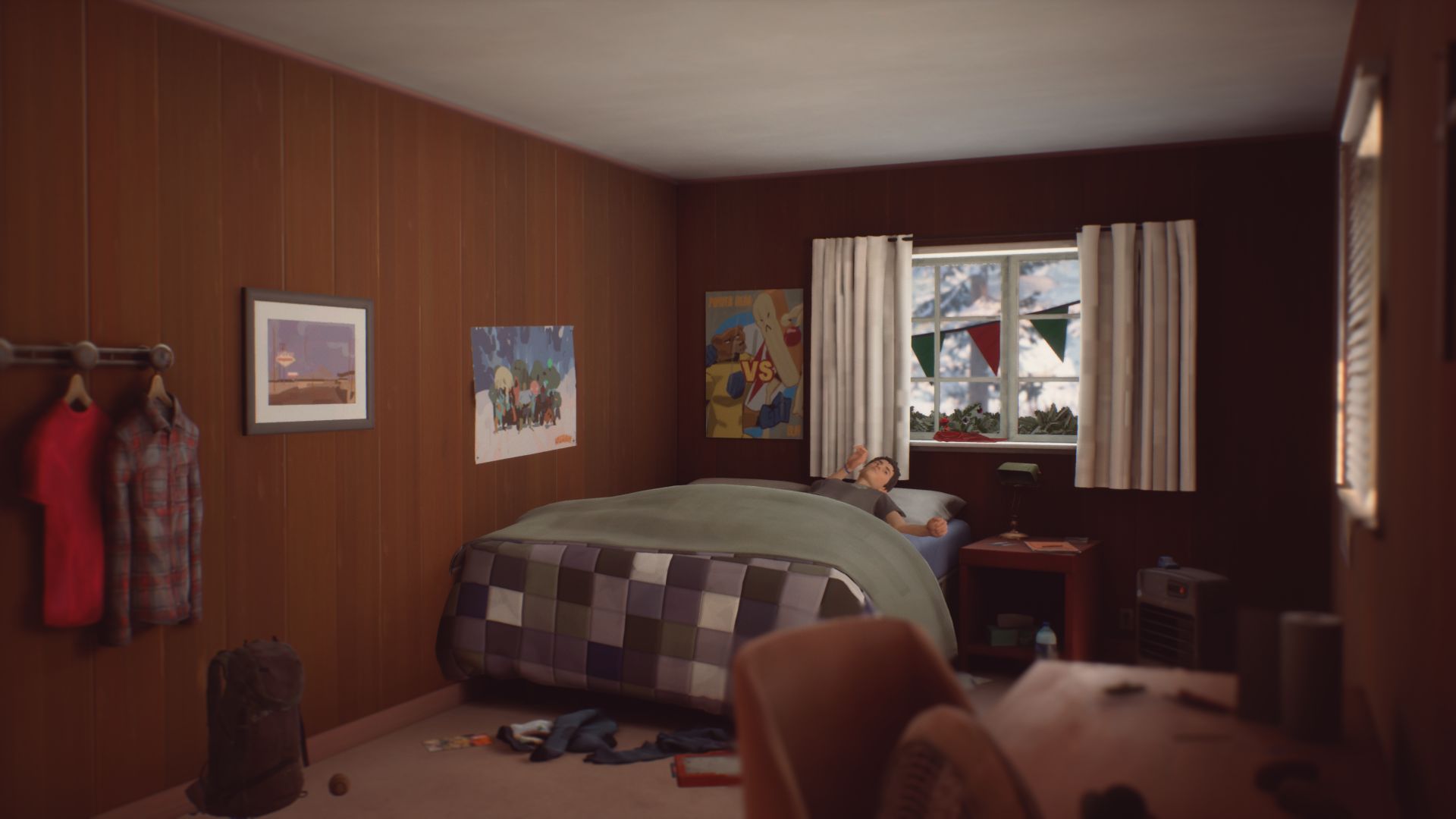 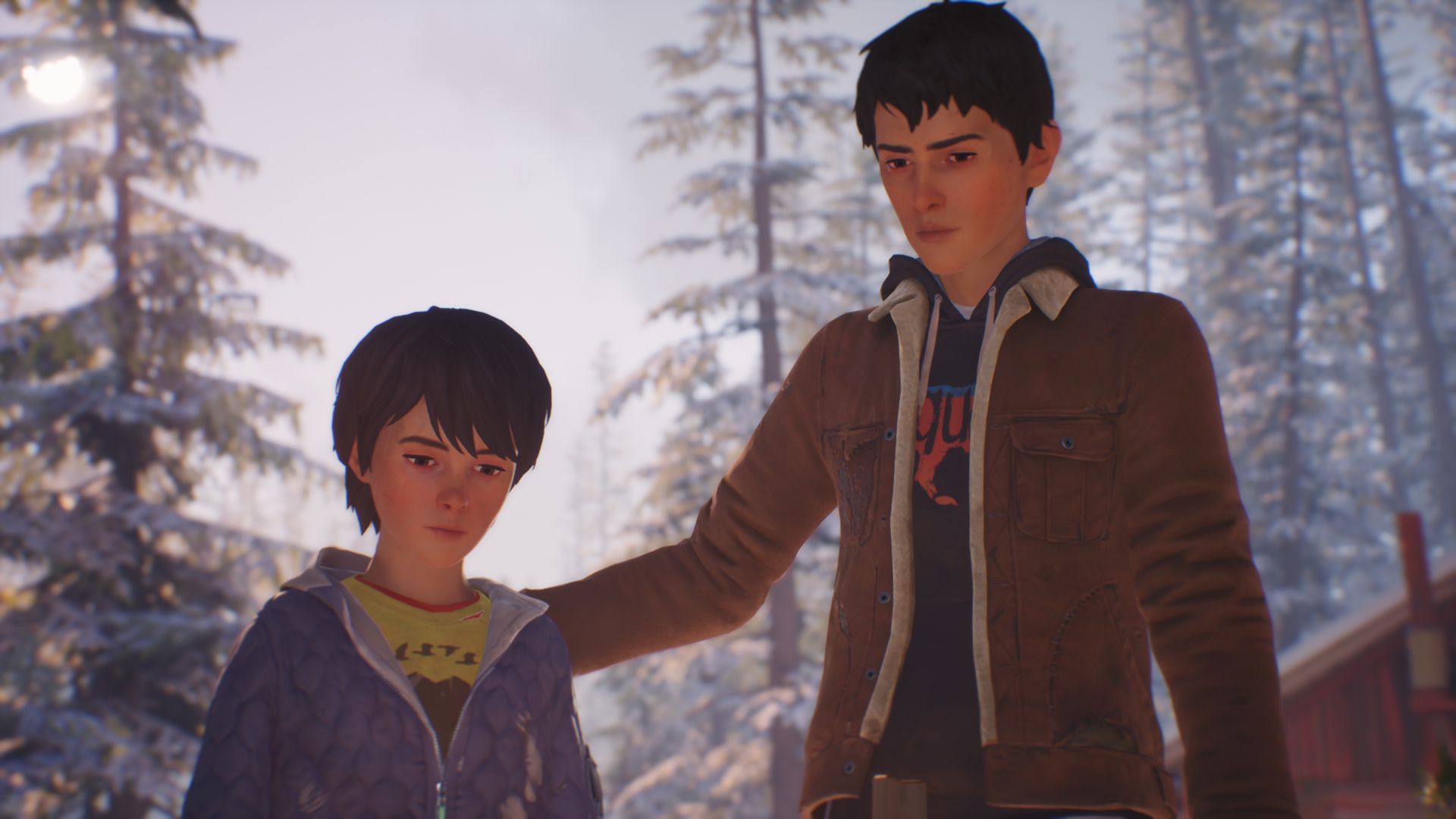 Alice Bee: Hello Brendan. I suppose you’re wondering why I’ve gathered you, singular, here today. It is because we both played episode two of Life Is Strange 2, Rules. I am excited to talk to you about this because I think we might have had different outcomes this time. The Fabulous Diaz Brothers (™) had a hard time of it in the first episode (you can catch up with our previous verdict-o-chat on episode one). We opened on this one to find them camping out in an abandoned cabin, in the snow. Spoilers ahead, readers, and go carefully, for I know that Brendy is still emotionally raw from some of the events in the episode. How’re you holding up, B?

Brendan: I’m not as upset as I thought I’d be. Mushroom the puppy was horrifically savaged by a large cat, and I had one of those gut reactions. The scum, how dare they kill that wonderful, innocent, fictional dog? But yes, once I remembered this was a Dontnod game, and I saw the ol’ storytelling strings of emotional puppetry, I regained my composure. They were always going to kill the dog. And that makes it somehow… okay? I’m being cold-hearted again, aren’t I?

Alice Bee: I was surprised, like you, at how quickly the dog got John Wick’d. I was expecting Mushroom to be around for like at least another episode, and then Daniel would accidentally asplode her with his telekinesis in a fit of emotions, thus learning a valuable lesson and being saddled with guilt at the same time.

Brendan: Christ on a bike, Alice. 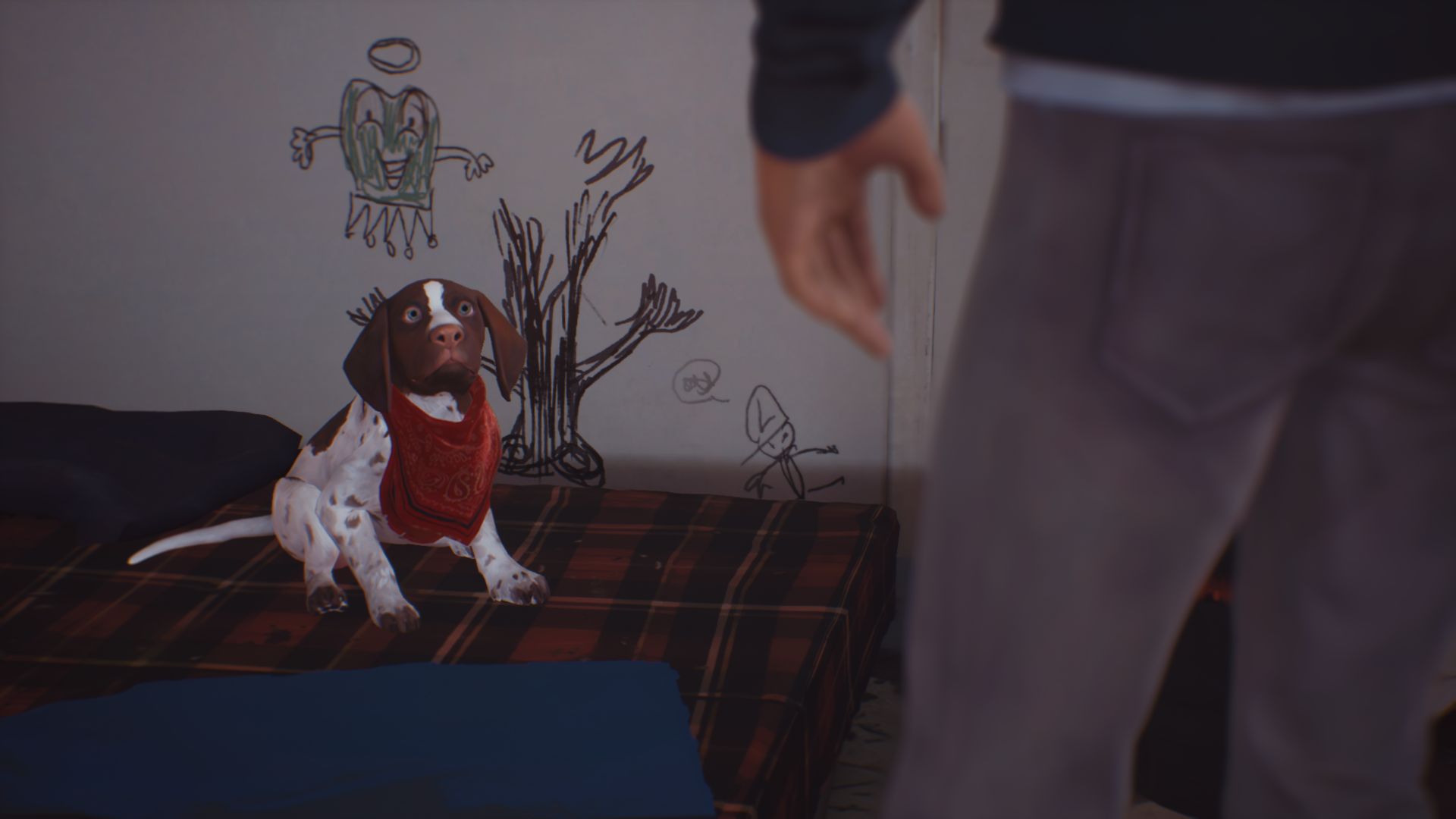 Alice Bee: My heart was never even warm, baybay. But as it was, Mushroom’s death at the end of act one ended up being the emotional climax of the episode for me. The actual ending I got was so fine it was boring.

Brendan: Well, at the end of my playthrough, a police car smashed into little Chris Culkin (the caped boy hero who isn’t really a hero) and left him maybe-dead. But I agree with what you say about the punch of Shroom’s death being more climactic. I felt less affected by Chris being run over. And I’ve played as the wee lad.

Alice Bee: See I didn’t play The Awesome Adventures of Captain Spirit first. But I did like Chris and his dad (possibly because there’s no implied alcoholism in this, really; instead you get allusions to how he’s struggling after his wife’s death etc. etc., which, fair enough, anyone would?). I liked Chris and Daniel becoming friends and doing kid stuff together, because the Diaz brothers don’t get to be kids much.

Brendan: They don’t, no. Too busy killing America’s finest.

Alice Bee: But you obviously thought that letting Chris, a small child with a hero fantasy, believe he had actual super powers was fine?

Alice Bee: You were like, “No way this could go wrong! It’s more important to keep Daniel’s secret! My name’s Brendan!” 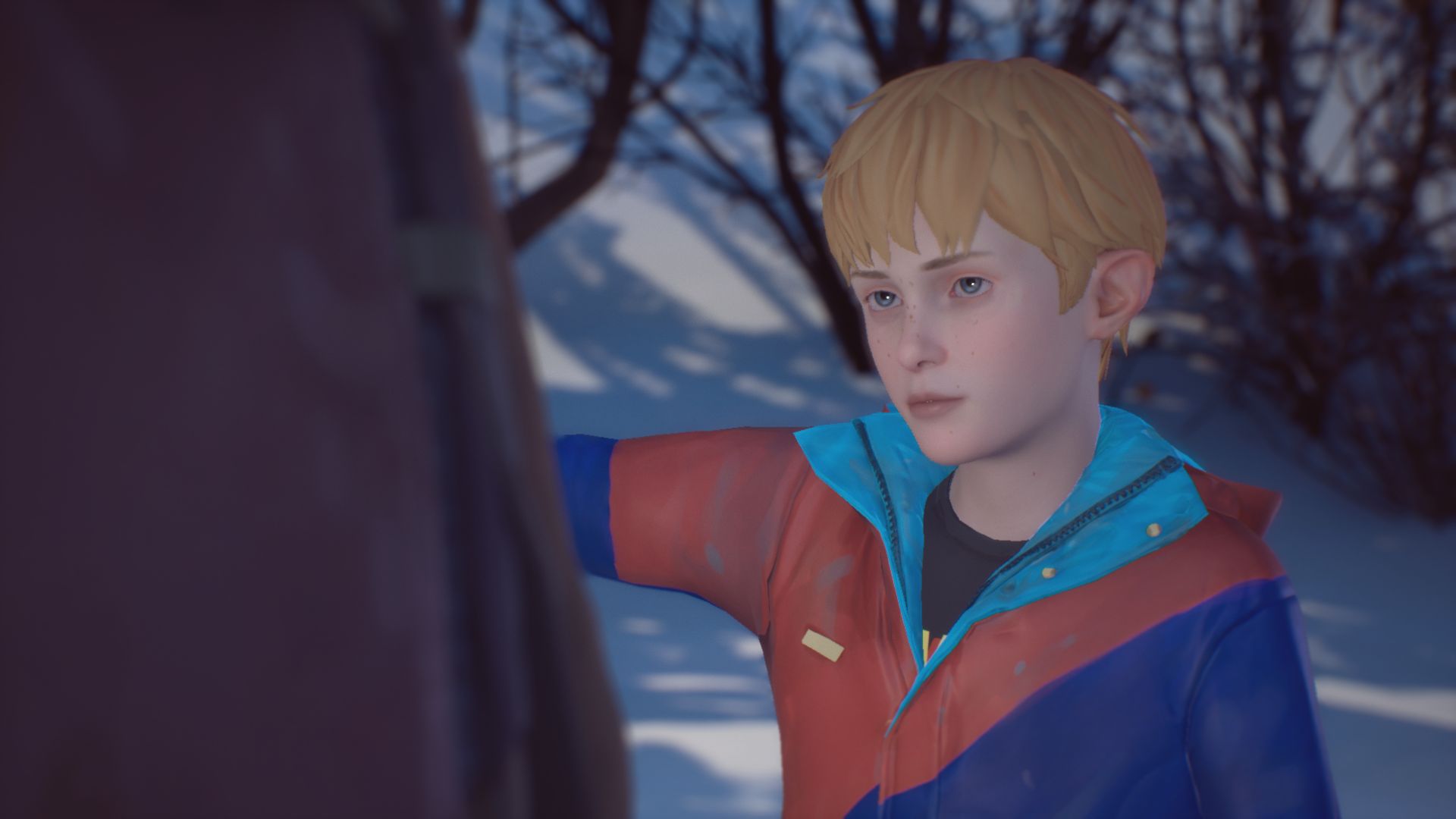 Brendan: Keeping secrets is important! Also, I was very confused by the decision prompt for this. It is worded so vaguely. One of the choices is “Keep the Secret” and the other is “Stop lying to Chris”. So does “stop lying” mean saying: “Okay, little Danny please tell Chris you have superpowers”? Or does it just mean: “Okay, Danny, stop using your powers and let this blond semi-orphan believe it was all just his imagination”? Because if it were the latter, I would have done that. The choice should have said: “Tell Chris the truth.” Or whatever specific thing.

Alice Bee: The weird thing is that they make such a big deal about how they need to keep Daniel’s powers secret, but in this episode there are no bad consequences to not doing that. I told Chris the truth, and then he didn’t get kersplatted by a car. I told grandpa Stephen about it, and he was like “Cool, but granny Claire will freak out because of her beliefs.” But then I used the powers to save grandpa when he was crushed by Chekhov’s Wobbly Wardrobe and Claire just went “IT MUST BE A MIRACLE!” or something. What did you think of the grandparents, by the way?

Brendan: I liked them! I’ve heard some folks were bored by this episode, but after the bloody killing of a puppy you really do need some down-time. I like that grandaddy Steve is really into his model trains. I like that nanna Claire is really religious, but still has a load of trashy (possibly naughty) romance novels on her bookshelf. I liked how strict and “clean-your-room-young-man” she was. And how she had this obviously troubled relationship with her own daughter. She wasn’t just your average kindly grandmother. She was a bit overbearing. But as the Diaz boyz, you had to hold your tongue. To be fair, she is kind and brave enough to harbour a pair of wanted criminals.

Alice Bee: I did find the episode boring overall, but I think that was because I didn’t get a kind of slap in the face or interesting ending to balance out the quality grandparents time. But yeah, I really liked them. I liked how you could help tidying up and stuff, and actually I think my favourite detail in the entire episode is that they hang decorative wooden signs on all the doors in the house, and one of them says “Toilet’s”. But I did get annoyed that, for the sake of pushing the story along, I had to be a bad grandson and disobey a lot of Claire’s orders. I know why, but I didn’t like doing it! 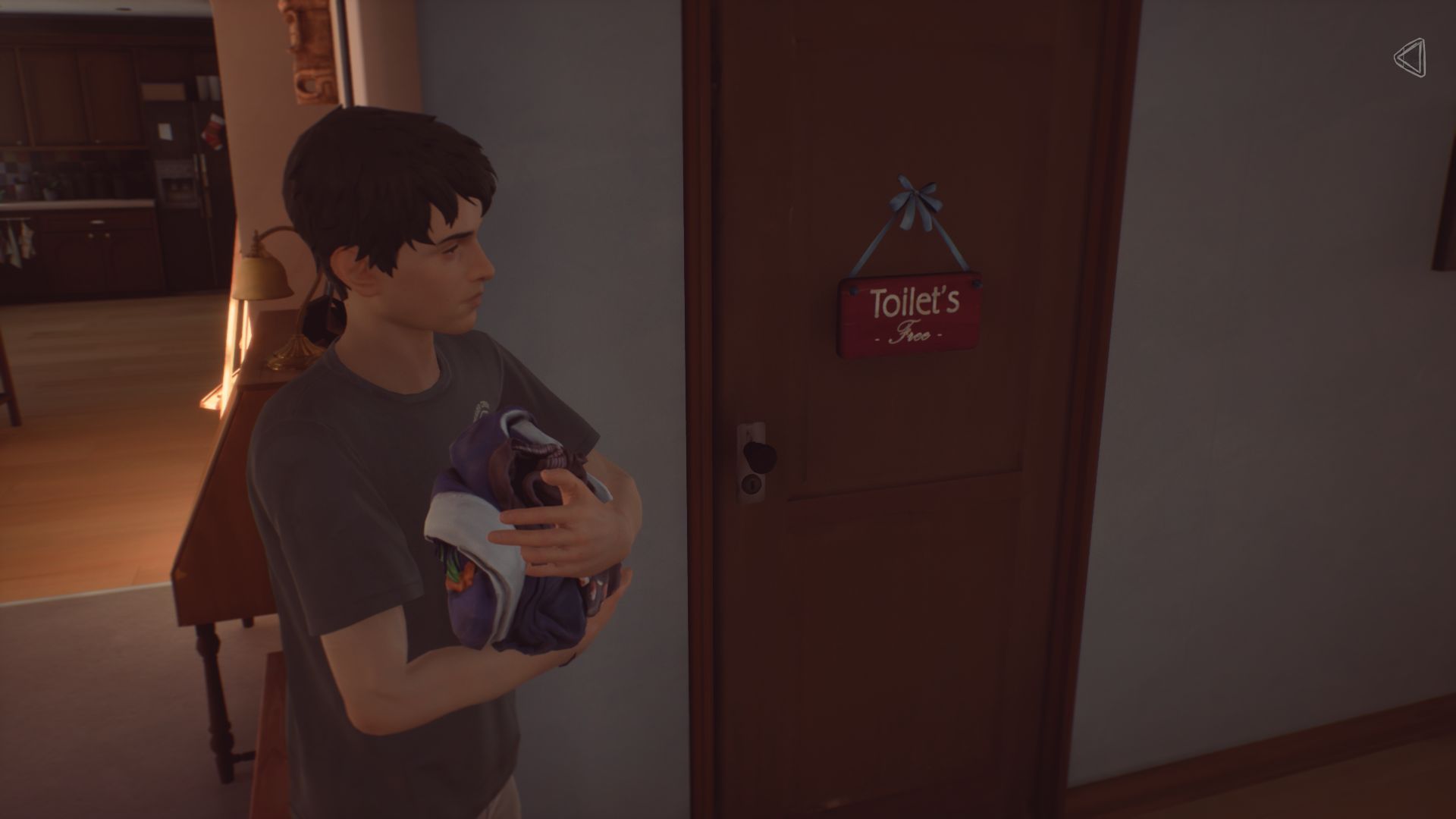 Brendan: OH GOD. This was the worst. One decision that feels meaningfully important in the episode (as far as having real, foreseeable consequences) is whether or not you should go into town with Sad Dad and Son. But it doesn’t let you make that choice. The game just shunts you there. You’re fugitives, lads. Listen to your bloody gran and stay inside. That happens again later, like you say, when you go into your mum’s old bedroom despite gran telling you it’s off-limits. That you end up in those places wouldn’t bother me so much. But you aren’t forced to go there by circumstance or persuasion. Sean just decides to go along with it. It’s like he’s suddenly possessed by the writers. “Yes. I will go into town. I also like Christmas trees.”

Alice Bee: It was sort of funny because I think at one point Claire or Stephen says maybe this could be the boys’ new secret home. And then they immediately prove they don’t have the self control required for that. I had actually forgotten that there’s this big reveal about their mum knowing what’s going on and asking her parents to help her sons, so I suppose we’ll be running into her at some point. And the helpful drifters that Sean met in town.

Alice Bee: She’s not kissable, she has an adjacent male friend of indeterminable intimacy!

Brendan: And when you kiss her, there will be consequences. OH NO.

Brendan: Oh my god, Alice, stop. They can’t do that. The Dontnod offices will be burned down before they can finish the game. 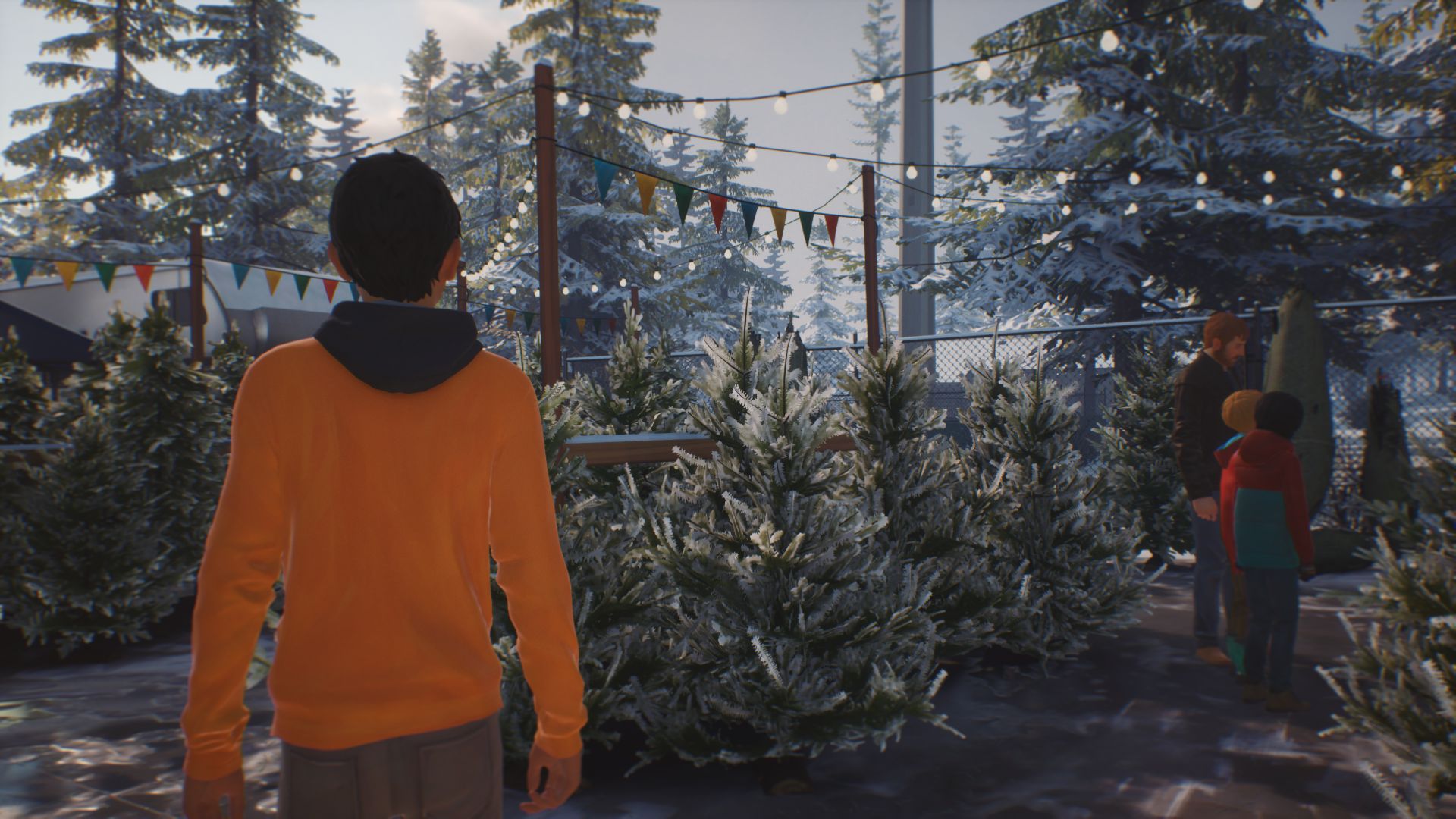 Alice Bee: That would be a shame, because although I felt things in this episode happened in sort of the wrong order for me to enjoy it, I am warming to Daniel much more. He has some great fluctuations between maturity and sweet immaturity. I do want to see how this one turns out for him.

Brendan: He’s becoming a sweary big boy for sure. But still a littl’un at the same time. There was a moment when they were rifling through their mum’s old stuff, and he says they should go find her, go see her. And I felt this real pang of sympathy. His dad is dead, he’s been living in the woods miserably, and he simply has this childlike homing instinct to go find his mum.

Brendan: A wee pidgeon who has tumbled out of the nest thanks to police brutality.

Alice Bee: A pidgeon who can kill pumas with his mind.

Brendan: Hang on, did you kill the puma!?

Alice Bee: I didn’t, actually. I was like, hey, cat’s gotta eat. It’s a wild animal. It’s only natural. Circle of life. 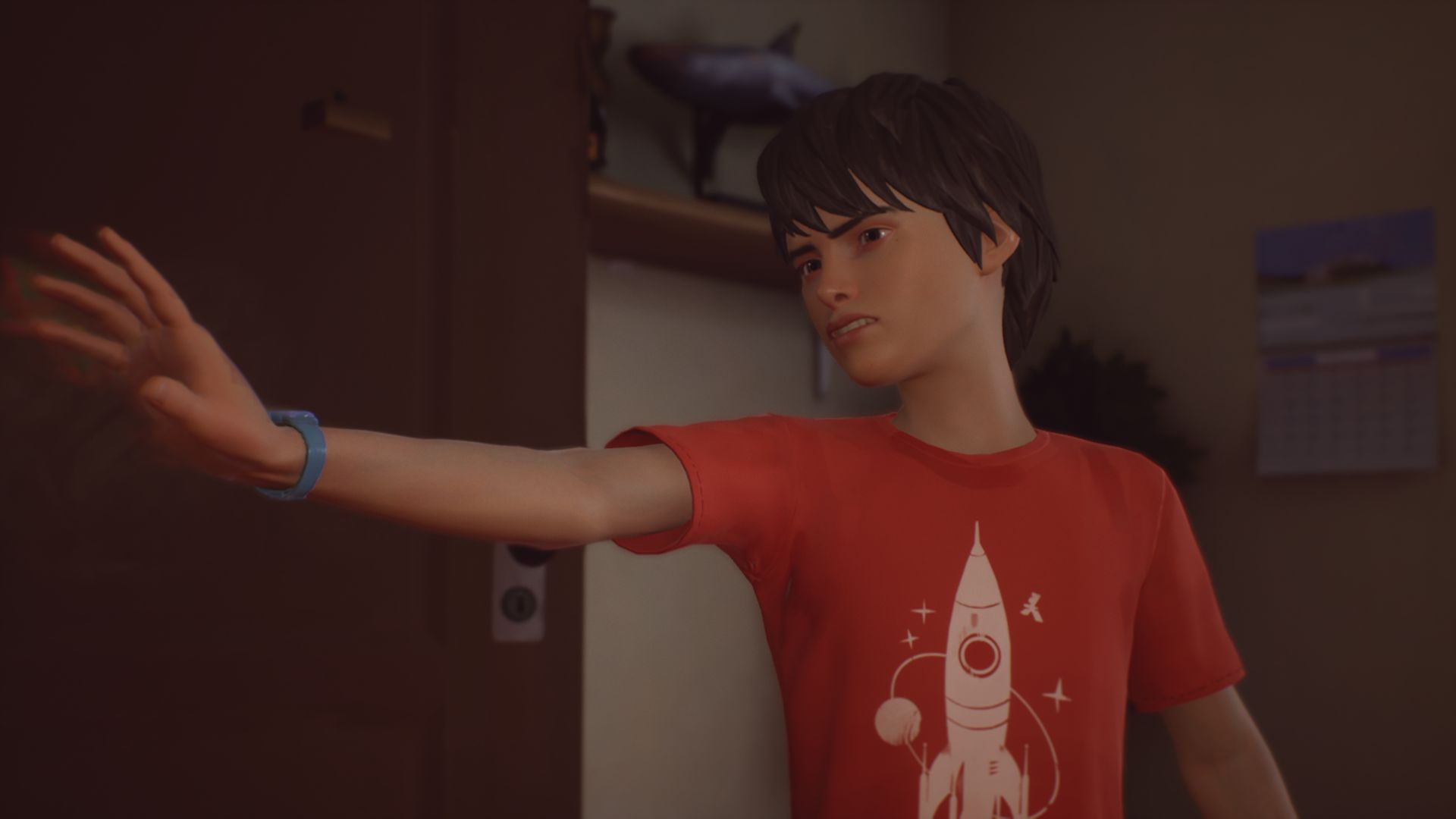 Brendan: Phew. Thank god. That puma’s got cubs, I bet. One last thing before we wrap this up. Do you still dislike the sketchbook?

Alice Bee: Actually! I’m glad you mentioned this, because I thought it was much better in this episode! Like, in the sketch of the living room you do you can add in Daniel and your gran and so on. Or the one that Chris asks you to add imaginary stuff to, and you can choose zombies or aliens. It felt much more of an interactive thing rather than a bolt on to make you appreciate how nice the scenery was.

Brendan: I think the sketchbook is ace. Because I have a garbage memory, and it’s good at reminding you of all the places you’ve been and horrible racists you’ve met. Sean’s drawings are so much better than a “previously-on”, and it fills in the blanks between episodes. I also like how Daniel has started to add his own doodles in colouring pencil. Sean has been letting him use the book. They’re bonding! I mean, having your dad shot and developing psychic abilities is probably more responsible for that. But also, sketchbooks.